The largest labor action in the country has the potential to transform higher education. 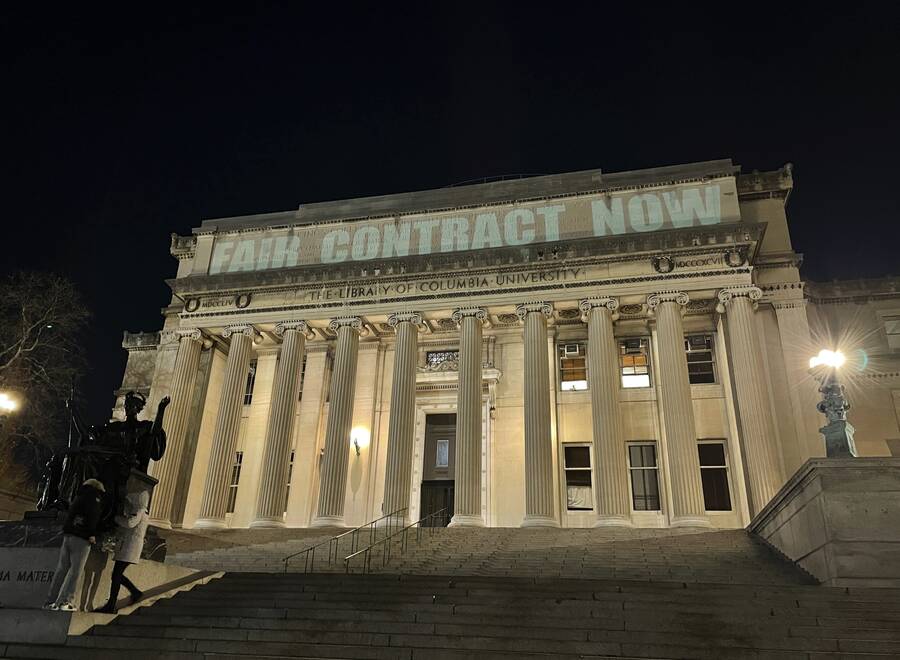 AS THE FALL SEMESTER draws to a close, so does the eighth and possibly final week of Columbia University’s graduate student worker strike. Earlier today, the graduate student union and Columbia entered mediation that has the potential to end the biggest labor struggle in the country. On each of the union’s three main demands—increased wages, dental and vision insurance, and neutral arbitration for allegations of harassment and discrimination—a compromise appears to have been reached, such that the total cost to Columbia will be $57.2 million over the next three years, $30.4 million less than the union’s original proposal.

If things resolve as they appear likely to, the relatively good outcome will have been the result of tenacious organizing that has been going on for far longer than the past two months. “The administration being intransigent and dismissive or abusive has been a constant for years,” said Jon Ben-Menachem, a second-year PhD candidate in the sociology department. Indeed, although the Student Workers of Columbia-United Auto Workers (SWC-UAW) labor union was formed in 2016, Columbia refused to recognize the union until 2019, three years after the National Labor Relations Board ruled that teaching assistants are indeed workers under federal labor law. When Columbia finally deigned to appear at the bargaining table, the main issue at stake was the scope of the NLRB ruling and what types of students it covered. But as tensions mounted after years of unsuccessful bargaining and stonewalling from the university, Columbia graduate students formulated a far more comprehensive set of demands.

Most of these were fairly standard for a union striking for better labor conditions. SWC is demanding that student workers earn at least $40,000 while on appointment and receive a 3% annual raise. They also want hourly workers to make at least $22 dollars per hour, and for the university to apply “reasonable effort” to cover matriculation and facilities fees past the fifth year of PhDs, when guaranteed funding typically runs out. They originally demanded both dental and vision insurance be covered by the university healthcare plan, but have agreed to cut vision in the latest round of compromises. Where SWC is unique, however, is in its demands for neutral third-party arbitration for allegations of sexual harassment and discrimination.

Columbia is no stranger to high-profile sexual harassment cases. In just the past three years, the university’s internal investigations found that at least three tenured professors had engaged in inappropriate sexual activities with students, ranging from illicit years-long relationships to instances of sexual assault. But there are also cases where Columbia hasn’t found itself guilty, and thus far in the bargaining process, the university has insisted that all allegations go through their internal Equal Opportunity and Affirmative Action (EOAA) office, with the addition of a “neutral lawyer” who has no ability to actually investigate discrimination or harrassment. Johannah King-Slutzky, a third-year PhD candidate in the English department, referred to the university’s tactic of offering “extremely limited arbitration scope” as “a very cynical ploy.”

Over the course of the strike, Columbia has also threatened to cut grad student pay and to replace all 3,000 striking workers, and has changed payment disbursement schedules to disincentivize students from striking. Joshua Freeman, Distinguished Professor Emeritus of Labor History at the City University of New York, is unsurprised by Columbia’s blatant union-busting. “The vast majority of graduate students are not at elite universities,” Freeman said. “The story that gets the most attention is the fancy school, the private school. Columbia’s not different from any private employer, and private employers hate unions.”

“The narrative at elite universities is that they’re students, not workers,” he added. “They’d always argue that there’s a mentor-mentee relationship. You don’t hear that anymore, since that language is kind of sullied by stories of sexual exploitation and harassment.”

It’s also sullied by the fact that PhD programs have increasingly come to resemble cheap labor schemes rather than professional training programs designed to produce tenure-track professors. “That’s why organizing has gotten stronger,” said Ben-Menachem. “At the end of the day, PhD programs are not livable for people who don’t have intergenerational wealth.”

In the three years since Columbia recognized its graduate students as workers under federal law, it has given the union plenty of reasons to become more effective organizers. After narrowly voting down a tentative agreement reached in March, the union elected a new bargaining board and reorganized its leadership structure to give rank-and-file members greater say in its proceedings. Rather than accept the March agreement, Columbia grad students have been galvanized to continue fighting a reluctant administration for a fair contract.

Freeman linked SWC’s persistence to recent labor actions in other sectors of the economy, including John Deere workers refusing two contracts and finally accepting a third, as well as Kellogg’s workers finally reaching a contract after eleven weeks of negotiations. When I asked him whether this might signal a shift in workers’ attitudes toward their employers across all industries, he was cautiously optimistic: “I think the numbers [of striking workers] are relatively small at this point, so it’s mostly anecdotal. But it kind of looks like that, yeah—it looks like something’s going on.”

Update: On Thursday night, several hours after this newsletter was sent out, Columbia made a proposal to the SWC. After caucusing for several hours, union members voted to reject over insufficient union recognition and contract length.

“Unfortunately, the university continues to union-bust by insisting that some classifications of workers would be excluded beyond the scope of the NLRB’s definition of our unit, particularly workers who are paid hourly rather than on a salary,” said Johannah King-Slutzky. “As a result, basic workplace protections would disappear for many workers in the union. Although we are close to an agreement, our unit will vote down any contract that does not extend basic protections to the full unit as defined by the NLRB.”

As of Friday afternoon, negotiations are at an impasse.

Dispatch
A Seder on Rikers
On celebrating freedom with the incarcerated
Arielle Isack
Sign up for our email newsletter, featuring exclusive original content
Want original reporting and analysis on Israel/Palestine?
Sign up for the Tuesday News Bulletin.