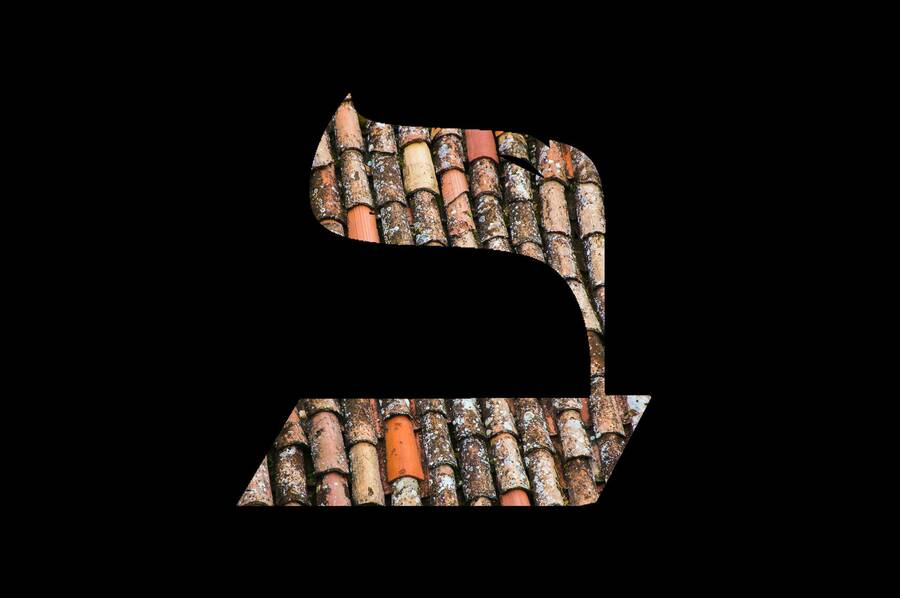 Of the Talmudic stories I know, this is my favorite: When Rabbi Yochanan ben Zakkai hears about the destruction of the Temple, he negotiates the salvation of Yavne, where he has a school. In the wake of the ruin, ben Zakkai converts his school into a religious center, announcing that instead of making sacrifices to G-d at the Temple’s altar, Jews, wherever they find themselves, will now connect with G-d through prayer. In place of a singular site for external gathering, a plural ritual of interior flourishing. In this shift to prayer—and to Rabbinic Judaism—Jewish texts proliferated, becoming a new homeland. In the diaspora, the world itself became a text. When we build houses in galut, for example, Jews leave a stone unpainted to recall the destruction of the Temple. The house tells a story, signifies.

Anthony Russell’s “Beys”—named for the second letter of the Hebrew alphabet, derived from the Proto-Semitic glyph for “house”—reckons with this textual space of diaspora. Russell calls up the practice of inscribing the memory of the destroyed Temple, invoking this practice not as an “after,” but as a kind of origin: “The foundational assertion—the stone that the builder refused will always be the head cornerstone—does not inspire a confidence in builders.” If there is doubt in diaspora, where the instability of interpretation supplants the certainties of physical space, there are also the radical possibilities of reconstitution that doubt makes possible.“The history of our houses is a history of dissolution,” Russell writes. The tradition here is neither the promise of unyielding certainty nor the pretense of a route back to a lost past. On the contrary, the tradition is forged as each thing gives way—“a single, open-sided letter.”

Our concepts of houses are curious, the unconscious fancies and obsessions of people originally suited to tents, suited to stones for pillows, stones as altars, suited to the secure fastness of hills, the possibility of strategic flight. Now, here were these strange, rooted extensions of ourselves, as susceptible to uncleanliness as the bodies that moved in and out of them, individuals the angel of death could pass over.

God—themselves a founder and commissioner of houses—had always been ambivalent about them, indulging humanity’s domesticities like a parent asking after the imaginary friend of a child. Solomon (second inhabitant of an intangible house) built a holy box; God arrived as a cloud, elemental, inscrutable, blessing this earthly mess.

Eventually, due to the vagaries of history, the Israelites lost every house they’d devised, and God departed, trading the house in for a cardboard box of boundless exile. There, at prescribed times of the year, we built our own queer little tabernacles, adhering to their own queer little laws, inviting guests we could not see, weather we could not stop, stars whose warmth we could not feel.

The foundational assertion—the stone that the builder refused will always be the head cornerstone—does not inspire a confidence in builders. Our houses have always been tenuous things, more elusive than stones, more enduring than brick, open-sided, permeable to the whims of divine clouds and seasonal rain.

Anthony Russell is a performer of music in Yiddish with contributions in The Forward, Tablet, JTA, PROTOCOLS and, recently, Jewish Currents and In Geveb.

Essay
Translating Black Lives Matter into Yiddish
Amid an eruption of protests over police brutality, a Black performer of Yiddish music reflects on an attempt to “touch Blackness from inside Yiddish.”
Anthony Russell
Sign up for our email newsletter, featuring exclusive original content
What’s good?
Signup for our weekly Shabbat Reading List for recs on what to read—and why.