The ice cream maker is suing its parent company for selling off its business interests in Israel to a local company that plans to sell in West Bank settlements. 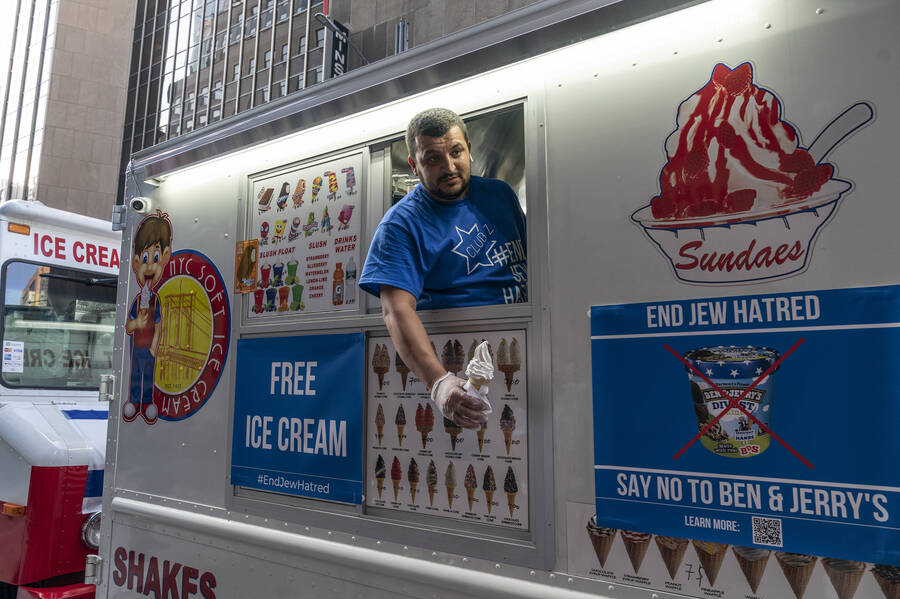 A protester against Ben & Jerry’s decision to boycott Israeli settlements sells ice cream at a demonstration in New York on August 12th, 2021.

LAST WEEK, consumer goods conglomerate Unilever announced it had sold off its Ben & Jerry’s business interests in Israel to American Quality Products, the Israeli company that had long distributed Ben & Jerry’s ice cream in the region, including to Israeli settlements built on land taken from Palestinians. But Ben & Jerry’s—a US-based ice cream company, famous for its social justice bent, that was founded in 1978 and acquired by Unilever in 2000—is now attempting to stop Unilever’s Israel sale. Earlier today, the company filed suit against its parent company, arguing that Unilever breached its acquisition agreement with Ben & Jerry’s, which promises the ice cream brand autonomy on matters relating to its social mission. Ben & Jerry’s is asking a judge to block the Unilever sale, as well as for damages.

The escalating battle over the future of Ben & Jerry’s ice cream in Israel comes nearly a year after Ben & Jerry’s announced a boycott of Israeli settlements because, the company explained, it was “inconsistent with our values” for its ice cream “to be present within an internationally recognised illegal occupation.” Omar Shakir, the Israel and Palestine director for Human Rights Watch, told Jewish Currents that Ben & Jerry’s made that decision “to avoid complicity in serious human rights abuses and to avoid providing a veneer of normalcy to a situation of structural violence and apartheid.”

However, Unilever’s June 29th announcement that “Ben & Jerry’s will be sold under its Hebrew and Arabic names throughout Israel and the West Bank under the full ownership of its current licensee” has undermined the Ben & Jerry’s settlement boycott. Now, Israeli settlers will be able to enjoy ice cream that tastes like Ben & Jerry’s, even if the US company is no longer making the product (although it’s unclear whether this ice cream will use the same recipe as the US brand).

The Unilever announcement was taken as an immediate victory for Israel and its advocates. Yair Lapid, Israel’s Foreign Minister, and Orna Barbivay, Israel’s Economy Minister, welcomed the move as “an important victory of values against discrimination and antisemitism that is at the heart of the campaign to boycott Israel.” The Palestinian Boycott, Divestment, and Sanctions (BDS) National Committee, which spearheads the global movement to boycott Israel over its human rights abuses targeting Palestinians, and five other US-based Palestinian rights groups condemned Unilever for its effort to “appease Israel” and “attempt to subvert the principled stand by Ben & Jerry’s board.”

Unilever’s decision put an end to a lawsuit Unilever faced from American Quality Products’ owner, Avi Zinger, who had sued Unilever in US federal court in March, accusing Ben & Jerry’s of unlawfully breaching its licensing agreement.

The Unilever sale to Zinger was the successful culmination of a year-long effort to lobby the parent company to reverse its subsidiary’s decision. That campaign included Zinger’s lawsuit, accusations that Ben & Jerry’s was antisemitic for boycotting West Bank settlements, letters to the Securities and Exchange Commission accusing Unilever of violating financial disclosure rules, and pledges from seven states—Arizona, New Jersey, New York, Texas, Illinois, Colorado and Florida—to disinvest hundreds of millions of dollars from Unilever stock, in accordance with laws preventing state funds from going to companies that participate in the BDS movement. (In response to Unilever’s sale, Arizona, Texas, New York and New Jersey have pledged to review the inclusion of Unilever on their investment blacklists, while Florida and Colorado said they would not reverse their prohibitions on investing in Unilever.)

For Israel advocates, Unilever’s statement demonstrated the power of their campaign, which was meant to send a message to other corporations about what would happen to them if they heeded the Palestinian call to boycott Israel over its human rights abuses. “I expect, in the future, multinationals will think twice before they decide to ostracize Israel for BDS reasons,” said Michael Ashner, an investor who started the Coalition to Hold Unilever Accountable, which campaigned against Ben & Jerry’s boycott of settlements. “This has been a very costly and difficult period for [Unilever], and I am glad that they’ve come around to a different view.”

Still, close observers of the Unilever announcement said the reality of what the company did was more complicated than the tenor of Israeli press coverage—which portrayed the move as a full reversal of the Ben & Jerry’s decision—made it seem. Ben & Jerry’s is now out of the business of selling ice cream in Israel, and as the company pointed out in its own response to the Unilever announcement, “our company will no longer profit from Ben & Jerry’s in Israel.” In its place will be Zinger’s version of Ben & Jerry’s, marketed only in Hebrew and Arabic. “If the idea of the anti-BDS campaign is to compel international companies to operate in settlements, this is the opposite of that,” said Lara Friedman, president of the Foundation for Middle East Peace (and a Jewish Currents contributing writer). “This international company is now not operating in Israel or the West Bank.”