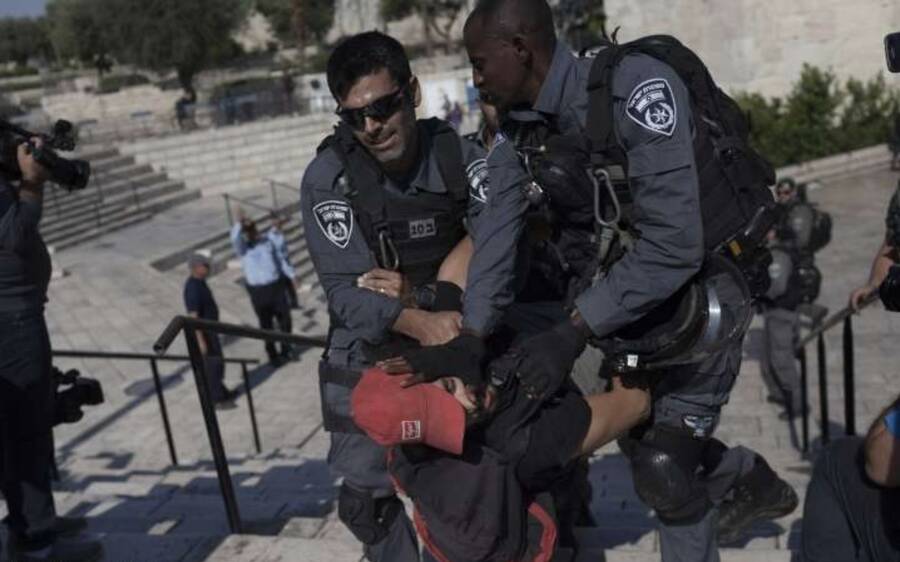 WE STOOD, and when my feet were knocked out from under me, I was supported and held. We sat, then lay down, our heads resting on smooth, ancient stones. We were grabbed, our hands and shoulders knuckled to the nerve. We were pushed and we were thrown, between and beneath other shouting, chanting bodies. Someone stroked my hair and asked if I could breathe. The question confused me until I saw there were at least two layers of bodies on top of mine. I heard them singing, so I sang. Then there were fewer of us; soldiers were dragging us away. I locked eyes with a friend, and then they were gone. I locked eyes with a stranger, and then they were gone, too.

It was Jerusalem Day, a holiday that celebrates the “reunification of Jerusalem,” or the military annexation of Palestinian East Jerusalem into the state of Israel—depending on your politics. A parade tens of thousands strong was storming through the city, but only the most militant Jewish-Israeli nationalist contingent had continued through the gates of the Old City (Damascus for men, Jaffa for women) and into the Muslim Quarter. Each year, the Old City braces itself hours before the parade, rolling metal grates across vendors’ booths and locking Muslim residents in their homes, before the narrow, timeworn passages flood with voices chanting “death to Arabs.” Palestinians who protest this ritual barrage of threats are brutalized by Israeli border police. We were there to join them and to block the Damascus Gate. At the Tel Aviv airport, there is a display emblazoned with Herzl’s quote: “ZIONISM IS AN INFINITE IDEAL.” It goes on to say: “It doesn’t end when we have our state.” So when does it end?

I lay on my back, my arms still linked—with whom, I didn’t know. Soldiers stepped on and over me. The barrel of a rifle stared me down, swinging casually. A launcher for sponge-tipped “bullets” was slung above my face, and I looked up into a barrel the width of a soda can. Tzitzit waved gently in the breeze beside it. The sky above the ancient archway was the deepest Mediterranean blue, bluer than the star on the flag. The sun warmed the stones. It was almost peaceful.

I was grabbed and thrown again, my arms yanked and shoulders wrenched. A knee dug into my back. I scrambled for my glasses, then, anticipating what was to come, let them fall to avoid crushing them. A gun jammed against my neck, the side of my face pressed against ancient smooth stone. A soldier’s knee on my chest, on my neck. I probably screamed—or sang. Whichever it was, that’s what I did until I was alone, cut off from familiar faces by an icy wall of soldiers. Carried by an arm and a leg, dragged up uncountable stairs. Not cuffed or tied, just held by the wrists, by a man or boy using his own hands. The sound left my throat and I wasn’t brave anymore.

A familiar voice was crying, “Show your badge numbers! You’re required to uncover your badge!” The soldier barked back in Hebrew, our ancient and holy tongue, “I’ll show you the badge number on my dick!” I was thrown away at the top of the stairs, into a sea of white shirts and blue flags, men shouting at me in English, saying that I was crazy, that I was destroying things, others shouting in Hebrew, saying I didn’t know what.

My excuse to escape from the angry crowd appeared in the form of the biggest camera I’ve ever seen. An English-speaking journalist offered me water and a few questions. A first take had to be abandoned because I couldn’t stop looking into the camera, as if it were another weapon pointed at my face. The journalist said, “What were you doing?” and “Who are you?” I said, “We are diaspora and Israeli Jews here to say that 50 years of occupation is too many, even one year is too many, and international Jews must stand with Palestinians.” They asked if I thought it was possible for our small group to block the police or the huge march. I recited the Pirkei Avot adage that you are not required to finish the work but neither are you free to abandon it. They asked my name. They asked my age, where I was from. They asked whether I’m Jewish; instinctively, I touched my chai necklace. They asked for permission to print the fact that I am Jewish.

When they were done with me, I wandered away, nearly forgetting the group’s plan: to meet at a comrade’s house nearby, where he fed us melon before running off to another protest, one with music. I stayed behind and sewed up a backpack strap that the police had torn off while dragging him away.

Earlier, after we linked arms at the gate but before the soldiers pulled and knuckled and crushed us, we had been surrounded by early parade-goers dancing with flags. These were the most zealous among them, mostly teenagers, many bussed in from West Bank settlements. They chose “Am Yisrael Chai”—“the Israelite people live”—to bark in our faces. (I suppose they imagined they were singing.) We, a group of Jews, were surrounded, spat on, menaced with “Am Yisrael Chai,” a declaration that we are all alive.

That night, as I lay on a cot with a rolled-up sweatshirt as a pillow, in the dark of a Jerusalem apartment that once belonged to a man with the first name Herzl, drifting off every few minutes only to immediately wake myself up, my arms fighting an imaginary crush of bodies, I knew what they meant: Am Yisrael, the people Israel, survives, conquers, crushes, builds tanks, exports the finest weapons. Don’t fuck with Am Yisrael. Am Yisrael will kick your ass. But all of us, as Jews, were, are, Am Yisrael. Am Yisrael lives. We fight, we scream and sing and swing nightsticks at each other, point rifles at each other, mend each other’s backpacks and feed each other melon. That’s what Am Yisrael is doing—this is the infinite deal.

Ari Shahn is a pan-Midwestern street medic and Cool Chicago Jew. They can be found playing Hannukah parties with the local Yiddish punk band. Their greatest honor was being called a “rabble-rouser” by former first ward alderman Joe Moreno.