A Logic of Elimination 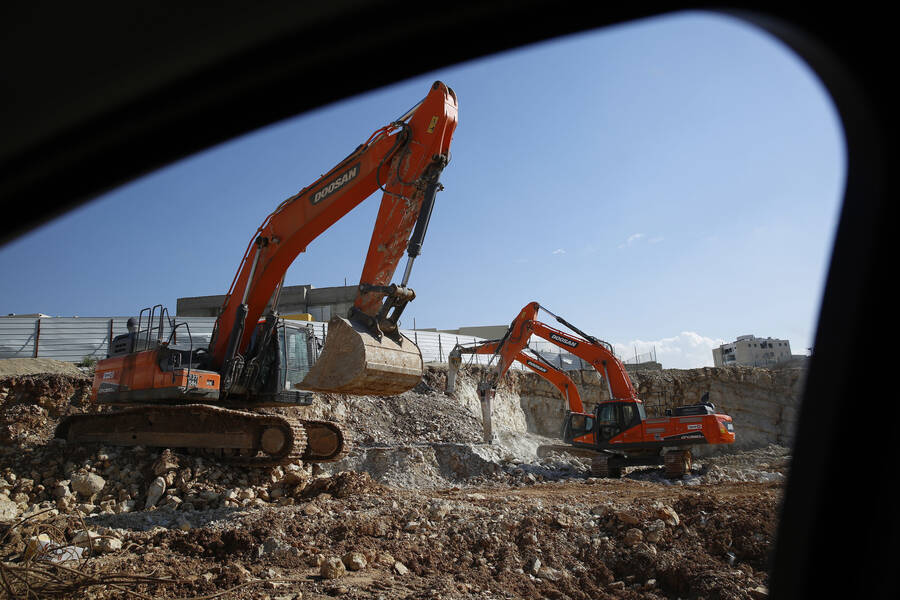 There are few terms in the discourse on Israel/Palestine more contentious than settler colonialism. Faithfully describing the experience of violent dispossession endured by Palestinians before, during, and after the Nakba in 1948—when Zionist forces expelled an estimated 700,000 Palestinians from their homes—stokes the anxiety many Zionists feel about the legitimacy of the State of Israel. For decades, pro-Israel activists have attempted to refute this account by asserting that Israel cannot be the result of a colonial project because the early Zionists lacked a “mother country.” A younger generation of Zionist activists has gone even further, insisting that Jews are indigenous to Israel and therefore Zionism is, in fact, a decolonial movement aimed at “reclaiming” the land for its natives. Although this contention is clearly belied by ongoing displacement, land expropriation, and settlement construction, the fact that the term settler colonialism remains front and center in the conversation underscores the framework’s traction.

To better understand the settler colonial paradigm—and how it relates to the Zionist project—I reached out to Lorenzo Veracini, an associate professor of history and politics at the Swinburne University of Technology in Melbourne. Veracini, whose most recent book, The World Turned Inside Out: Settler Colonialism as a Political Idea, was published by Verso in September, has long been engaged with the study of settler colonialism, including in Israel/Palestine. Together with the late Patrick Wolfe, with whom he had some critical differences, Veracini is credited with establishing key analytical divisions between colonialism and settler colonialism. In brief, unlike a “classical” colonial power—which establishes a colony as an extension of itself in order to extract wealth—a settler colonial society is not as interested in exploiting native labor and natural resources as it is in displacing Indigenous populations to establish a new society.

I spoke with Veracini about the characteristics of settler colonialism, Zionism, and what it means to imagine decolonial futures. This conversation has been edited for length and clarity.

Abe Silberstein: What is settler colonialism?

Lorenzo Veracini: Settler colonialism is a mode of domination characterized by [what Patrick Wolfe has termed] “a logic of elimination.” Settler colonial regimes seek to extinguish Indigenous collectives in a given territory, or at least to extinguish their political autonomy. The methods vary greatly, and they overlap and interact: ethnic cleansing, incarceration, assimilation, forced exile, etc. The idea that somehow the Indigenous peoples are no longer Indigenous often accompanies and authorizes these other tactics.

Not all colonialism is characterized by the goal of total displacement that animates settler colonialism. There are other modes of subjection that fall under the rubric of colonial domination in which the relationship of subjection is designed to perpetrate itself rather than being discontinued or superseded. Of course, colonial modes are not discrete; they always mix in dynamic ways.

AS: Is Zionism a settler colonial movement?

LV: Let me say this clearly: Zionism is a settler colonial movement and Israel is a settler colonial state. This is not an insult; it is a statement of fact. The Zionists were foreign to Palestine. They aimed to conquer the land and establish their sovereignty. They did, and they formalized this conquest in the establishment of the State of Israel. Historically and now, we see in Israel/Palestine a constellation of governing arrangements characterized by a logic of elimination, by the practice of replacement of Indigenous Palestinians and, conversely, by a Palestinian determination to resist this practice. This is what settler colonialism looks like, even if the modalities of replacement have changed over time.

AS: When we talk about colonialism, we often talk about one sovereign nation colonizing another—French colonialism in Vietnam or British colonialism in Jamaica. In the case of Zionism, the lack of a single “mother country” is often used to dispute characterizations of Israel as a settler colonial state. What do you make of this?

LV: The lack of a single “mother country” would demonstrate that Zionism was not a colonial movement—that is, a movement aiming to benefit an imperial metropole. This is accurate, because it was a settler colonial one: Even if the Zionist colonies were initially established under the imperial rule of Britain, Zionists always saw these colonial or imperial arrangements as inherently temporary. Eradicating the Indigenous population and its sovereignties in order to replace it with a sovereign Jewish state was always the end game.

Besides, we should reconsider what’s meant when we talk about a colony as an emanation of a “mother country.” For example, the United States, the most successful settler project of all, was once a collection of British colonies, but the settlers came from countries across northern and western Europe, and elsewhere. Palestine, too, was once a British colony, but the settlers came from, among other places, countries across central and eastern Europe. In terms of political geometry, I see little difference.

AS: Are there other examples of settler colonial movements that claimed to be “returning,” as Zionists imagined they were to Palestine?

LV: The notion of return frames many settler movements: returning to the land, returning to an authentic consciousness, returning to an invigorating environment, returning to a prerevolutionary world. The return to empire was a trope of the Italian fascists who claimed they were “returning” to Libya. When the French set out to colonize Algeria, French representations framed the North African country as the site of an original Latin world awaiting the return of the settlers. The European settlers of North America, too, fantasized that they had previously colonized the land. They even “found” inscriptions on some rocks “demonstrating” that their ancestors had once populated the areas they were now claiming. This land, they reasoned, was their inheritance. Even the settlers of Australia and New Zealand fantasized that the Indigenous peoples they were encountering were “Aryans,” people they shared some remote ancestors with. If they shared ancestors, the settlers reasoned, then they could rightfully claim the whole country as an inheritance. I could go on, but you get the pattern.

AS: What do you make of historian Derek Penslar’s contention that Zionism should be understood as encompassing features of colonialism, postcolonialism, and anticolonialism?

LV: All settler societies display these elements. This pattern is repeated time and time again: As settlers move into a new territory, their initial story is one of colonial domination. Then, as they establish their localized sovereignty and fortify their collective consciousness, they struggle to assert their independence from the metropole. According to this frame, settlers understand their history as one of anticolonial struggle. In some cases, settlers attain their sovereignty through war, as in the United States winning the Revolutionary War. In other cases, they negotiate it through diplomatic processes, like in Australia and New Zealand. Following this assertion of sovereignty, the settlers then develop their various nationalist versions of a “postcolonial” canon, as if settler independence was the end of colonialism. These cultural traditions typically emphasize the settler society’s exceptional nature and “achievements.”

This is a sequence that only makes sense if you don’t consider the Indigenous populations. Throughout this shifting narrative, the settlers retain their sovereignty and continuously express a logic of Indigenous elimination.

AS: In The World Turned Inside Out, you situate settler colonialism as an alternative to revolutionary change domestically: Settler colonialism is essentially a way to “solve” whatever problem a given population is experiencing on foreign land, rather than threaten the status quo at home. It is interesting to consider Zionism in this light, given that its Jewish detractors were not just the revolutionary socialists in Communist parties and the Bund, but also comparatively larger groups who were either religiously opposed to Zionism or wanted to assimilate into European societies.

LV: This is true, and it was a mighty struggle. Zionism had to contend with many opponents, and the socialist and communist revolutionaries of the early 20th century were only one subset. But revolution is more than the proposition of storming some Winter Palace. Assimilation can itself be conceived as a revolutionary transformation, radically shifting the relationship between a Jewish collective and society at large. Some Jews embraced this revolution: the cosmopolitan and liberal elites as much as the socialists and communists. Others resented it on religious grounds. The Zionists opted out of all revolutions and contradictions in their lands, choosing to displace instead.

AS: Might the political salience of “settler colonialism” be overstated? Are Zionists too fearful of the implications of this term being more widely accepted to describe Israel? Are Palestinians and their allies perhaps too hopeful about the potential of such discursive shifts to propel material change?

LV: Stating the demonstrable fact that Zionism is settler colonialism does not mean that decolonization is any closer. Undoing settler colonialism as a mode of domination has proved extremely difficult. Even when recognition has been offered, as it has in many settler societies, land and political autonomy have rarely been restored. And yet, that it is difficult does not mean that we shouldn’t try. Everyone has much to gain from the undoing of this structure of domination, even the settlers. Who wants to benefit from someone else’s dispossession? Moreover, I have been looking at settler colonial movements for decades and I have seen that they do not honor their promises. They promise land, and everyone ends up a tenant of some bank (if they’re lucky). They promise regeneration, and we all live unsustainably. They promise a more meaningful relationship with the places we inhabit, and the best they can offer is to be usurpers. Zionism is no exception.

Undoing settler colonialism would require finally interrupting the logic of Indigenous elimination. A state built on this logic would need to be completely reorganized. There is a growing body of international experience regarding this transformation. New Zealand and South Africa, for example, began enacting similar processes in the 1990s. The sky has not fallen in either country.

This conversation has been updated to clarify that scholar Patrick Wolfe coined the formulation "a logic of elimination."

Abe Silberstein is a writer based in New York. His work on the Israeli-Palestinian conflict and US foreign policy has previously appeared in The New York Times, Ha’aretz, The Tel Aviv Review of Books, and War on the Rocks.

Dispatch
The Passion of 964 Park Place
A standoff between tenant organizers and yeshiva students over the fate of a Black family’s home summoned the specter of the Crown Heights riots, and provided an object lesson in housing activism at the end of the Covid eviction moratorium.
Ari M. Brostoff
Essay
Point of No Return
Palestinians cannot turn back the hands of time. But we might still imagine a world beyond exile.
Dylan Saba
Sign up for our email newsletter, featuring exclusive original content
Short on time?
Sign up for our weekly Monday roundup of everything you missed in Jewish Currents last week.