A Guerilla Workshop on Pinkwashing

In the organized LGBTQ community, Jews and Muslims demand discussion of Israel/Palestine. 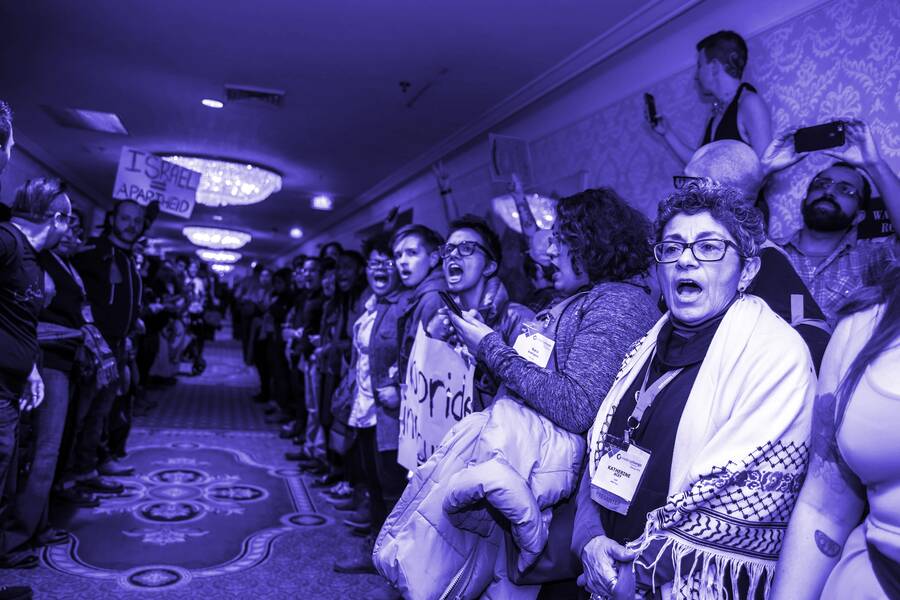 THE VIOLENCE IN GAZA over the past weeks has been met with resounding silence from the American government and Jewish community. With a few exceptions, the killing of at least 34 Palestinians during non-violent protests has elicited little outrage and few public expressions of solidarity from outside the left.

This silence did not come out of the blue. Influential progressive groups across the country routinely and reflexively suppress conversations about the Israeli occupation of the West Bank and the blockade of Gaza. LGBTQ political advocacy organizations, in particular, have failed this standard in recent years; the Creating Change conference in Washington, D.C. this past January serves as a critical reminder of this.

Organizers from Tarab NYC, a group advocating on behalf of LGBT people from the Middle East and North Africa, and Jewish Voice for Peace, were forced to project a PowerPoint presentation onto a white bedsheet in a hallway in the Washington, D.C. hotel. The forum should have been in a conference room, like all the other workshops that day; however, the Creating Change conference organizers had refused to sponsor this presentation on “Pinkwashing,” the popular term for the use of Israel’s relatively positive record on LGBTQ+ rights to shut down conversation about the rights of Palestinians. In fact, Creating Change did not accept any workshops related to Israel/Palestine. In defiance, nearly 100 people crammed into the hallway twice that weekend to attend the pop-up workshop.

Creating Change is the national conference on LGBTQ Equality, organized by the National LGBTQ Task Force. It represents a cross section of the queer community, and reflects the issues facing the individual communities it intersects with, as well as national attitudes regarding movements for social justice. It provides an important opportunity for organizing and mass mobilization. The Creating Change conference has evolved with the progression of the queer and trans movement, and its evolution continues to serve as a flashpoint for a movement in transition.

The roots of the guerilla Israel/Palestine workshop were planted at the Creating Change conference in Chicago in 2016. That year, A Wider Bridge, a pro-Israel organization that some argue normalizes violence against Palestinians, held a reception. The Task Force first cancelled the reception over concerns about pinkwashing, then reversed its decision following backlash from Israel advocates. In response, Palestinian organizers, Black Lives Matter Chicago, Jewish Voice for Peace Chicago, and indigenous communities led a protest directly outside of the reception. The protest managed to disrupt the reception, taking the Task Force by surprise. The hotel called the police, a decision which some organizers felt put the lives of protestors of color at risk.

Following Creating Change 2016 in Chicago, the Task Force hired an independent contracting agency to review the Task Force’s existing standards and make recommendations for updated policies. The recommendations included new policies regarding receptions and protests, and a list of priority themes for workshops which only feature domestic issues. Creating Change and the consultants seemed to think excluding discourse around Israel/Palestine would reduce conflict. However, judging by the popularity of the pop-up pinkwashing session this year, these recommendations have not quelled interest in the topic.

Creating Change is not the only LGBT group wrestling with how to discuss Israel/Palestine. In June 2017, the Chicago Dyke March became the target of criticism when March organizers asked leaders of A Wider Bridge to either put away their rainbow flag with the Star of David on it, or leave. The A Wider Bridge leaders reportedly modified group chants to exclude mentions of Palestine and vocally defend Zionism, which March leaders determined violated their anti-Zionist stance. Similarly, activists from Jewish Voice for Peace disrupted the 2017 Celebrate Israel parade in New York City, leading to blowback from staff of Jewish Queer Youth as well as other Jewish organizations.

UNFORTUNATELY, Creating Change is following the well-worn path of censorship rather than engagement and open discourse.

Hillel International, the organization for Jewish campus life, has the notorious Standards of Partnership, which, for example, bar speakers and organizations that are deemed too critical of Israel by Hillel donors and leadership. These types of red lines disproportionately affect LGBTQ Jews, as we belong to two marginalized communities, and find allies and solidarity within a wide range of other groups. This means we are politically caught in the middle, and often pushed out of Jewish establishments. For example, Hillel forced the LGBTQ Jewish group at Ohio State University to disaffiliate after the group co-sponsored a fundraiser for LGBTQ refugees with a pro-BDS organization.

In denying the political choices of LGBTQ Jews, the Task Force treats us as if we are guests in someone else’s house, restricted by someone else’s rules. This dynamic presents a catch-22: perspectives that are critical of Israel are disproportionately denied room, however, when Jews who are critical of Israel, such as Jewdas and Jewish Voice for Peace, create their own spaces or disrupt others, pro-Israel advocates condemn them. Creating Change had an opportunity to break this false dichotomy and allow queer and trans Jews control over our own meetings, communities, and norms. Instead, we saw our autonomy limited once again.

Despite the attempt to stifle our leadership, Palestine still quickly became a major source of discussion. The Jewish caucus workshop, which occurred later in the Creating Change conference, was a place of heated argument. There was a great deal of disagreement and division over whether even to discuss Palestine. Some felt the tension in the room needed to be released, and wished to make this workshop the time to discuss Palestine. Others felt robbed of the opportunity for simple community building and the unique atmosphere queer Jews can provide each other. Regardless, the group reached at least one conclusion: the Task Force must not silence discussion of Palestine, as it will happen anyway, and will inevitably take precious space and time from within other community forums. When there are no designated gatherings for conversation about Israel/Palestine, the topic will inevitably bleed into and divide other precious queer Jewish and Muslim meetings.

For the past few years, Muslim and Jewish organizers have co-led an interfaith dialogue, which is crucial for creating trust, communication, and accountability between our communities. This year, leaders reworked the annual Muslim-Jewish dialogue to focus on the intersections of Islamophobia and antisemitism. However, only hours before the event was scheduled to take place, the Task Force canceled it. In the workshop’s place, Task Force staff led a conversation about the violence in Charlottesville. There were no Muslim or Jewish Task Force staff leading the conversation. Several Muslim and Palestinian organizers walked out of the room in protest. Organizers of the originally scheduled session believe the Task Force intervened out of fear that Israel/Palestine would become a topic of discussion.

Rather than police our work without investing in it, the Task Force must trust Jewish and Muslim organizers to be the experts on our own experiences and our own conflicts. The Task Force must recognize that the Jewish community is not a monolith; there are many contradicting perspectives on Israel/Palestine within the community. Canceling an Israeli reception will not appease the entire Jewish community, and neither will rescheduling the Israeli reception. Stifling discussion of Israel/Palestine by refusing to accept any workshops on the subject will also not appease the Jewish community; in fact it will only be a disservice to Jews as the topic will encroach into other gathering spaces. And then, excluding Israel/Palestine will be the only thing left for people to talk about.

Emily Strauss is a senior at Pennsylvania State University.

Writings GridBlog-Shmog
Naftali Bennett’s Mosaic United Should Stay Off Campuses
Emily Strauss
Sign up for our email newsletter, featuring exclusive original content
Short on time?
Sign up for our weekly Monday roundup of everything you missed in Jewish Currents last week.