A Divorce Story, from “Both Sides”

Taffy Brodesser-Akner’s debut novel reflects the irrelevance of Jewishness to the most pressing concerns in many American Jews’ lives. 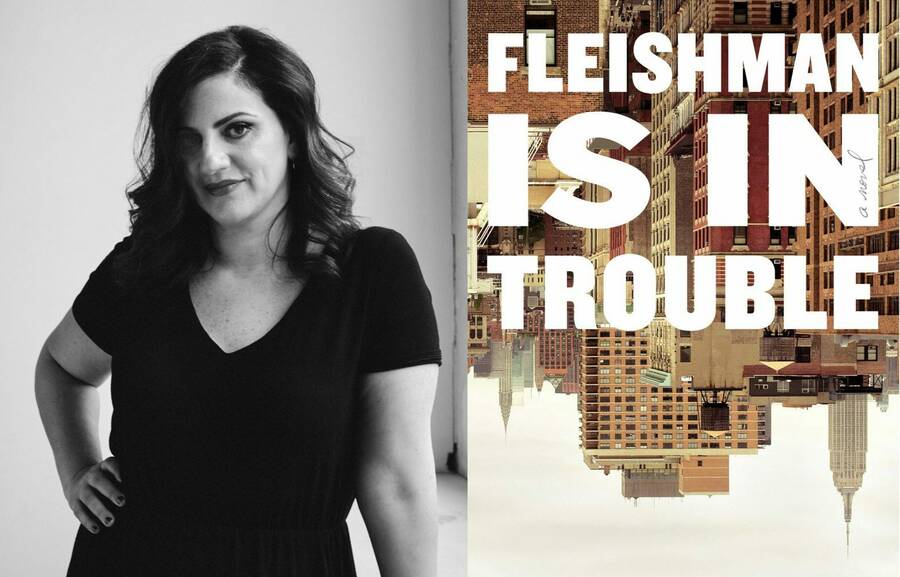 Discussed in this essay: Fleishman Is in Trouble, by Taffy Brodesser-Akner. Random House, 2019. 384 pages.

MARRIAGE AND ITS DISCONTENTS have always been a central concern of modern Jewish literature. As scholar Naomi Seidman explores at length in a dazzling recent book, The Marriage Plot, the Hebrew and Yiddish literature of the 19th century and the American Jewish literature of the 20th returned again and again to courtship and romance. Writing about marriage helped Jews modernize, Seidman argues, and lent drama to fictions about Jewish identity and community.

Fleishman Is in Trouble, which is already being celebrated for “updat[ing] the miserable-matrimony novel,” contributes to that tradition by perspicaciously subverting it, reflecting the irrelevance of Jewishness to the most pressing concerns in many American Jews’ lives with refreshing honesty. The novel—a debut by New York Times Magazine staff writer Taffy Brodesser-Akner—is an energetic, funny midlife crisis story, moored in the so-called First World problems of putatively successful American Jews. It’s most winning when offering finely tuned, well-earned social observations of Gen X, now all grown up.

Most of what the novel covers is what you might expect from a book about a failed relationship between ostensibly successful, upper class, white Jews. When it begins, Toby Fleishman is by all accounts doing fine. He has proceeded from Princeton undergrad to NYU Medical School to a successful medical practice at Columbia and an apartment on the Upper East Side. His wife, Rachel, has been killing it as a talent agent. When we meet them, Toby and Rachel are in the process of getting divorced, like so many people in their forties—they resent each other, they’ve been fighting for years—but why should that get in the way of their happiness? There’s no real stigma around divorce anymore. A rich array of dating apps offer Toby an endless, customizable stream of women who are frenetically DTF. As a result, his divorce has actually facilitated a personal sexual renaissance.

The novel’s titular “trouble” occurs over a couple of months during which Rachel disappears, abandoning Toby in their shared custody relay race (“peaceful co-parenting,” Toby calls it, ruefully). This happens during the summer, of course, when childcare becomes most tenuous. Toby is left scrambling to keep up with his two kids—Hannah, age 11, and Solly, age 9—a rare and tricky case at the hospital, and the many women constantly texting him pornographic pictures of themselves.

If at this point you are wondering why, in 2019, you would want to read the story of a wealthy, white nebbish experiencing what, by the standards of most people who don’t earn a quarter of a million dollars every year, is a mildly inconvenient summer, you’re not alone: the novel itself often gives the impression that it would rather concentrate on the challenges facing Rachel, or on Toby’s friend Libby, a recovering journalist and the novel’s narrator, but is stuck instead with Toby. A somewhat murky set of ideas about the competition between men’s and women’s stories, in magazine journalism especially, is voiced often enough by Libby to amount to a vaguely feminist subplot, featuring an off-stage misogynist writer in the approximate shape of Gay Talese. One of Brodesser-Akner’s chapter titles even delivers a shock reminiscent of those parables used to highlight unconscious gender bias. As with such pedagogical exercises, there’s something pat and vaguely unsatisfying about all this—I sometimes found myself wishing that Libby would tell her own story, rather than Toby’s. That would have felt more timely, at least. Libby’s decision, late in the novel, to break with the ethos of macho journalism by telling “both sides of the story”—Rachel’s as well as Toby’s—feels well-intentioned but insufficient.

But where the novel is more sure of itself is in its handling of Jewishness. Fleishman Is in Trouble takes pains to position itself within a Jewish American literary tradition. For one thing, Toby’s medical specialty, hepatology, obliquely but unmistakably conjures the ghost of Philip Roth, whose Portnoy was, in his own inimitable way, also a “liver specialist.” The world of the novel is thoroughly Jewish: Toby, Rachel, Libby, and their friends are all Jews, and most of the people they have affairs with are, too. They’ve ended up in New York but come from a range of Jewish backgrounds—Toby’s was “a fairly traditional Jewish home” in Los Angeles; Rachel looks like her “absent gentile father”; Toby’s fuck buddy Nahid was born to Iranian Jewish parents exiled to Paris. Toby first met Libby on a study abroad program in Israel during college, and the novel returns to that time again and again as the most meaningful, formative experience of their lives (taking for granted that a semester in Tel Aviv was an apolitical opportunity for nice Jewish kids from the suburbs to experiment with romance and drugs and make lifelong Jewish friends); one hears virtually nothing, by contrast, about Toby’s years at Princeton. Even amidst his chaos, Toby still brings his children to Shabbat services “every Friday night.”

Yet no kind of Jewishness—religious, Zionist, or cultural—offers Toby the slightest bit of assistance when he is “in trouble.” As his well-ordered life gets increasingly messy, he never considers, even for a second, that a rabbi might have something to offer him, or that an insight from Jewish tradition or literature might come in handy. The same is true for every other character. A certain kind of reader might fret about this as a reflection of the supposedly reduced salience of Jewishness in contemporary life, but what excites me, as someone who reads a lot of contemporary Jewish novels, is that Brodesser-Akner avoids an all-too-common Jewish literary cliché, which is the notion that a solution to all the characters’ problems can be found in a recovered historical document or implausible religious ritual.

On the contrary—and very reasonably—there’s no Jewish solution on offer for Toby’s and Rachel’s trouble because their problems aren’t specifically Jewish problems. We’re told early on that Toby’s “faith in systems has been compromised,” and it’s easy to nod along as Toby realizes the corruption of the systems he has believed in: the education system, the medical system, even systems of weights and pulleys (“Elevators had never bothered him before, but …”). In this novel of matrimony, Libby sums things up by saying that “[m]arriage always reminds [her] of that old saying about democracy”: “It’s the worst form of government, other than all the other forms of government.”

Enlivened by a reporter’s eye for detail, and charming even when exploring overly familiar territory, Fleishman Is in Trouble might ultimately be most memorable for the way it offers a counterweight to an old, persistent Jewish narrative about marriage—one that continues to effect policy and funding in the Jewish community, even as it is increasingly critiqued—which tells us that the most (perhaps, only) important thing about a Jewish person is whom they marry. In the novel, Toby turns out to be a bit of a twerp, and Rachel’s a deeply troubled person too wrapped up in the status competitions of the Upper East Side, and Libby settled down into a suburban marriage too quickly, but none of this is mitigated or exacerbated by their Jewishness. In other words, Brodesser-Akner’s novel understands that when it comes to marriage and divorce, Jewish people are just people, like everybody else.

The State of the Genre
Jews with Money
Last year, a number of American Jewish novels tackled the fraught subject of Jewishness and wealth.
Josh Lambert
The State of the Genre
Who Speaks in the Jewish Novel?
In 2019, American Jewish fiction took a renewed interest in the question of who gets to write about whom.
Josh Lambert
Sign up for our email newsletter, featuring exclusive original content