White Nationalism on the Ballot in Brooklyn 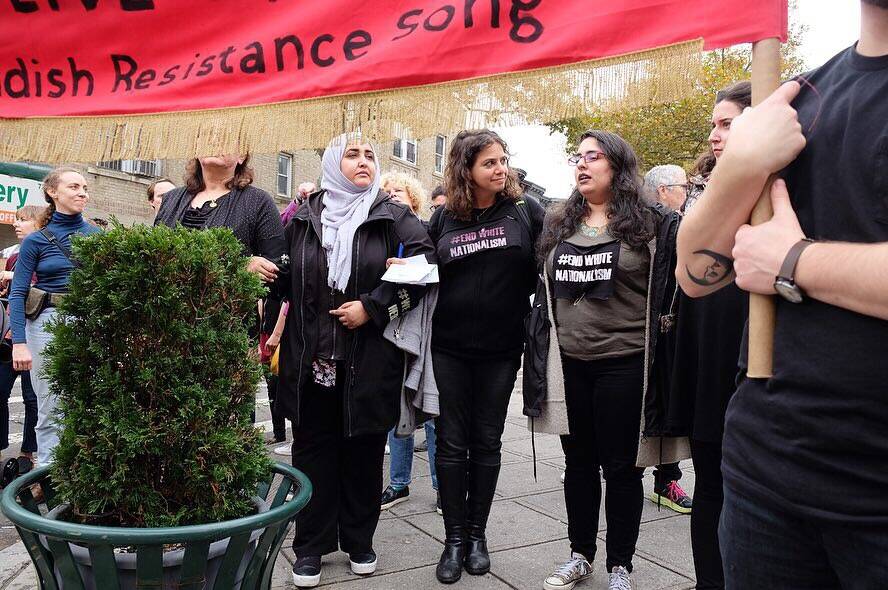 ON FRIDAY, 50 Jewish and Muslim activists gathered outside the office of Brooklyn State Senator Marty Golden. Some sat on stools and crates as if sitting shiva, others stood holding signs. At their feet, a banner read, “Tell white supremacists they don’t have a place in your party.” And placed on the banner were 11 kippot bearing the names of the 11 Jewish congregants killed at Tree of Life synagogue in Pittsburgh. Together, the assembled recited the Mourner’s Kaddish.

Golden, who’s seeking his ninth term as the state senator representing a gerrymandered swath of South Brooklyn, was nowhere to be found. His re-election campaign has become a local microcosm of a national reckoning over the rise of racist nationalism in the United States. Thursday evening, an event featuring his Democratic opponent, Andrew Gounardes, was cancelled when antisemitic graffiti was found in the stairwell of the historic synagogue where the event was to be held. The event’s host, Broad City actress Ilana Glazer, told the crowd of attendees outside she didn’t feel comfortable ushering 200 people into the enclosed space.

“About 30 seconds before we pulled up, we got a text saying the event was canceled for safety reasons,” Gounardes told Jewish Currents. “When we arrived, we saw everyone pouring out of the hall.” Gounardes went inside to meet his staff and talk to the organizers. “The irony is we were coming from a vigil in Bay Ridge for the victims of Pittsburgh and Louisville,” Gounardes said.

The action at Golden’s office, however, was planned before the words “Die Jew Rats” were scrawled on the walls of Union Temple. His offices have been a target of protest for weeks, as Golden has refused to fire campaign office manager Ian Reilly, who in October invited Gavin McInnes, leader of the alt-right Proud Boys, to speak at the Metropolitan Republican Club on the Upper East Side. After the McInnes event on October 12, members of the Proud Boys brawled in the streets with antifascist protestors, leading to multiple arrests. McInnes has proudly called himself “Islamophobic,” warned of “war against whites,” and posted a video after a visit to Israel called “10 Things I Hate About Jews.”

Reilly defended his decision to bring McInnes, telling Gothamist, “He is part of the right. We promote people and ideas of all kinds from the right.”

Earlier this year, Golden was forced to fire another staffer, Anthony Testaverde, after he shared posts on Facebook comparing the Parkland survivors to Hitler Youth.

The Golden campaign declined to comment on Reilly or the vandalism at Union Temple for this story. Through spokesman Michael Tobman, the campaign did provide the following statement to Jewish Currents on the shooting in Squirrel Hill: “Senator Golden, along with the rest of America and the world, mourns those killed in the horrific Pittsburgh synagogue attack. No political discussion around this tragedy is appropriate now.”

But, of course, the mass murder in Pittsburgh was highly political itself. It is easy to link the antisemitism of the suspect arrested for the shooting and the white supremacism either encouraged or tolerated by mainstream Republican politics. And it extends well beyond just the Tree of Life shooting: on Saturday, BuzzFeed News reported that a man who shot and killed two people in a Tallahassee yoga studio “was a far-right extremist and self-proclaimed misogynist who railed against women, black people, and immigrants in a series of online videos and songs.”

“It’s a very clear question: you either draw a line at white nationalist violence, or you don’t,” said Sophie Ellman-Golan, a member of The Jewish Vote, who helped organize Friday’s action at Golden’s office along with members of Yalla Brooklyn and the Muslim Democratic Club of NY. “It’s very clear Marty Golden does not. We’re asking him to fire Ian Reilly. We are asking him to unequivocally denounce white nationalist violence.” The Jewish Vote, with IfNotNow, HIAS, and other progressive Jewish organizations, helped organize a vigil for the Pittsburgh victims in Union Square last week.

But Liam McCabe, a GOP operative and member of the Brooklyn Republican Party’s Executive Board, went to bat for Reilly and his boss.

“I know Ian Reilly to be a good guy, who cares about his community and loves Republican politics,” McCabe told Jewish Currents. “What they’ve accused him of is outrageous and libelous. To call someone you don’t even know a white supremacist is very strong language.”

McCabe agreed that some of the rhetoric at the national level—Trump’s and the Democrats’—is “dangerous,” but the notion that Golden is responsible for antisemitism in Brooklyn is “ridiculous.”

“If Marty fires Reilly, it sets a bad precedent,” McCabe told me. “It’s an unfair attack. And it holds Marty to a standard the left is not holding Andrew Gounardes to,” he said, citing Gounardes’s endorsements from Reform Party chair Bob Capano, who used Islamophobic rhetoric to smear then-city council candidate Reverend Khader El-Yateem in 2017, and Arab American activist Linda Sarsour, infamous among conservatives for unapologetic leftist and pro-Palestinian statements.

But Gounardes doesn’t think it’s such a stretch to connect the rising tide of racism and bigotry in America to his opponent’s unwillingness to denounce white nationalism. “There may not be a straight line. But there is a relationship between the graffiti we saw last night, the murders in Pittsburgh, the Proud Boys coming to New York and inciting riots,” Gounardes said. “It’s all a product of the normalization of antisemitism, bigotry, and xenophobia in our society.”

And Golden, he says, is not doing enough. “As long as he continues to employ people who’re affiliated with and defend these far right groups, who embody and personify antisemitism and Islamophobia, then he is failing his moral responsibility as a human being to do what’s right and decent.”

At Golden’s office on Friday, Jewish and Muslim protestors wept together as prayers of mourning rang out in Arabic and Hebrew. “I wish we didn’t have to say the Mourner’s Kaddish,” said Ellman-Golan, “but it also feels good to say and do Jewish things in the middle of a city street. To not hide. To feel comfortable and loved and held in doing that.”

Toward the end of the protest, an unidentified man in an FDNY t-shirt pushed through the crowd to enter the office, shoving several protestors. Miriam Levia Grossman, who had helped lead the prayer, says the man grabbed her butt as he passed. “I was stunned,” she wrote on Facebook. “Is this happening? Is he really touching my body as I am grieving?”

“I came back to my body and thought- Right...this is what oppressors do,” Grossman wrote. “They attack from every angle. They do what they can to put you in your place- to convince you that you are not powerful. That you are small.”

For these activists, the state senate race is a referendum on some very basic values. “To Marty Golden and all other leaders of the GOP: Renounce White Nationalism,” Grossman wrote. “We are coming for your seats with our votes. Believe that.”

But unseating Golden won’t be easy. He has kept the seat for 16 years by consistently turning out conservative white voters in the district’s tonier neighborhoods. Gounardes will need a Democratic turnout that’s at least as big as optimistically projected, especially among young voters, Arabs, and immigrants. Gounardes told me he worries these attacks—and the rhetoric from the right—are part of an effort to strike fear into voters. On Friday, Golden’s campaign Twitter account sent out a “public safety notice” that the Gounardes campaign was “asking our neighbors to share - with strangers! - when their homes & apartments will be empty.” The tweet referenced standard get out the vote campaign literature which asks people what time of day they plan to vote.

After their prayers at Golden’s office, protestors marched to the Islamic Society of Bay Ridge as Tsibele, a local klezmer band, played in time. At the front of the group, young activists held aloft a banner. In Yiddish it read, “Mir veln zey iberlebn”—we will outlive them. It’s cold comfort. But if the GOP’s nationwide efforts to suppress the midterm vote succeed, it may be the only one they have.

Sam Adler-Bell is a freelance writer in Brooklyn, New York. He co-hosts the Dissent podcast Know Your Enemy.

Investigation
Welcome to Lammville
How the Hasidic housing crisis led to the largest case of federal voter fraud in modern American history
Britta Lokting and Sam Adler-Bell
Feature
The Capitalist’s Kibbutz
WeWork sold Wall Street a fantasy of Israeli communal living with an entrepreneurial twist—until it collapsed.
Sam Adler-Bell
Sign up for our email newsletter, featuring exclusive original content
Short on time?
Sign up for our weekly Monday roundup of everything you missed in Jewish Currents last week.