When Palestinian Political Speech Is “Incitement”

Since May, Israeli police have doubled down on their use of an expansive counterterrorism law to stamp out Palestinian activism online. 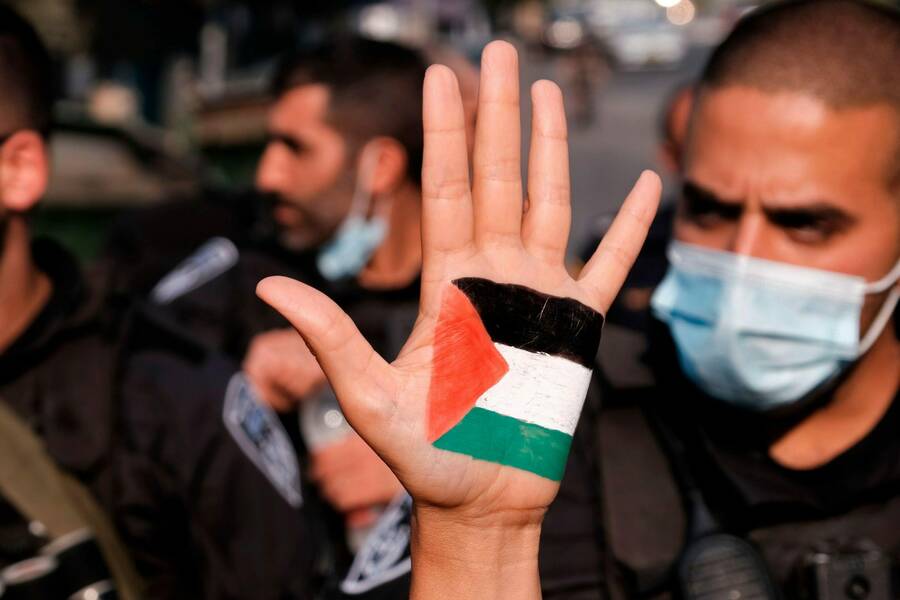 ON JUNE 11th, Mohammad Kana’neh joined a few hundred protesters at a weekly demonstration against settlement expansion in Sheikh Jarrah, a neighborhood in East Jerusalem that has become a flashpoint for protests against Palestinian displacement. Kana’neh, a Palestinian citizen of Israel and prominent leader of the secular Arab nationalist Abnaa el-Balad movement, stood under the hot sun and addressed the crowd in Hebrew, calling for an end to Israel’s occupation “from Silwan to Sheikh Jarrah, from Acco to Gaza.” He then turned to the line of border police that faced the crowd, shouting at them to “get out of the army.” Shortly after the protest dispersed, Kana’neh shared a video of his speech that another attendee had uploaded to Facebook; within hours, his post had been reshared by hundreds of users.

Three days later, Israeli police arrested Khana’neh. According to a spokesperson for Adalah: The Legal Center for Arab Minority Rights in Israel, which is representing Kana’neh, the police accused him of provoking the soldiers. They argued that by sharing the video, he had committed a crime that has been attributed to hundreds of Palestinian activists and dissidents in the last several years: the incitement of violence.

Incitement has become an increasingly common charge since 2016, when Israel passed an updated counterterrorism law. The law broadened the legal definition of the term to encompass not only speech that “directly calls for violence,” but also speech that, in the judgement of prosecutors, “expresses support for terrorist acts,” with or without a resolution to carry them out. The incitement charges that have been brought against Palestinian social media users in last five years show that, when it comes to Palestinian speech on these platforms, Israeli police often define “support” as broadly as possible: For example, when the poet Dareen Tatour posted a video of herself reading a poem entitled “Resist, My People Resist Them,” accompanied by images of Palestinains clashing with Israeli soldiers, on Facebook and YouTube, she faced the same charge that would be levied against a person who calls for lethal attacks to be carried out against specific users. Israeli police have wielded the law against users who retweet or like posts that security forces define as incendiary; according to Rabea Eghbariah, a lawyer for Adalah who has worked on incitement cases, even an RSVP to an event can lead to criminal charges. Palestinians may be held for months without access to a lawyer, and may not be informed of the nature of the charges against them, according to Eghbariah. They may also be barred from speaking to the press, accessing the internet, or sharing information regarding their cases while they await trial.

These were the prohibitions on Kana’neh as he sat in detention for a month, while Israeli authorities combed through his Facebook page, supplementing his file with posts ranging from celebrations of International Women’s Day to messages mourning the death of Palestinian political prisoners. Eghbariah explained that, by broadly construing the definition of incendiary content, police frequently make social media into a source of the evidence for charges against Palestinian detainees. Indeed, in Kana’neh’s case, the Israeli prosecution team claimed that not only the video, but also these older status updates had incited acts of violence and supported terrorism.

Since the latest escalation in violence in Israel/Palestine this May, incitement cases against Palestinian social media users have been on the rise, according to Adalah; 185 such indictments were filed in the late spring and summer. The proliferation of these charges comes alongside the growing use of online platforms to condemn Israeli military occupation and settler expansion. This spring, Palestinian activists used Twitter and TikTok to coordinate an unprecedented general strike that shut down businesses on both sides of the Green Line; in the months since, they have continued to broadcast scenes of American-born settlers taking over Palestinian homes in East Jerusalem, and to share experiences of living under siege in the Gaza strip with the world. Political pundits have nicknamed this new wave of resistance “the TikTok Intifada.” But even as Palestinians have found new ways to gather online, prominent activists have been penalized for using these platforms. As leading figures like Kana’neh are forced out of public view, organizers who would follow their example may be intimidated into silence.

THE BROAD CRIMINALIZATION of Palestinian social media users occurs as Jewish Israeli extremists have been left free to incite violence on platforms in full view of authorities. During the latest war, 7amleh: The Arab Center for Social Media Advancement, a Palestinian digital rights advocacy organization, tracked 183,000 instances of incendiary speech and incitement to violence against Palestinians by social media users in Israel/Palestine between May 6th and May 21st, amounting to a 15-fold increase in hate speech. Of the thousands of posts 7amleh archived, many called for acts of rape and murder against Palestinians, as well as the destruction of their property and businesses. Yet out of the 185 indictments on incitement charges filed in response to the events of May, only 30 were against Jewish Israelis. Meanwhile, police arrested upwards of 2,000 Palestinians between May 10th and May 21st.

In some cases, Jewish extremists employed social media platforms not only to harass Palestinian accounts, but also to lay the groundwork for near-lethal acts of violence. Right-wing militias—composed of both militant settlers and young adherents of the Jewish supremacist ideology Kahanism—used online platforms like WhatsApp, Telegram, and Facebook groups to coordinate attacks on Palestinian citizens of Israel in cities such as Bat Yam, Haifa, and Lydd. On Facebook threads and through encrypted chats, they picked out Palestinian-owned businesses to target, discussed what weapons to use and where to obtain them, and set the places and times where violent mobs would convene. “We could see the attacks being planned,” said Alison Carmel, 7amleh’s international outreach coordinator, recalling finding “thousands of accounts calling for death to Arabs, for real violence.”

The ease with which independent watchdogs like 7amleh found the meeting points of online extremists raises questions about how the authorities missed them. J., a Jewish Israeli activist who tracks right-wing extremist groups, and who requested anonymity due to the nature of their work, described the militias as largely composed of Jewish Israeli youth who often lack basic digital security skills. Many are easily identifiable by their legal names and phone numbers. “They don’t even try to hide things like gun sales,” J. said. “They know the authorities won’t target them.”

“All of the groups are open,” agreed Ori Kol, the founder of the Israeli media watchdog Fake Reporter, which tracks online disinformation and extremism. Fake Reporter even approached Israeli authorities at the height of the violence in May, offering to help them crack down on the online communities coordinating attacks on Palestinians. The organization’s researchers combed through social media networks and messaging threads, sharing screenshots of chats with authorities, including some that showed the legal names and phone numbers of armed extremists. But according to Kol, the police refused to act on the tips, allowing attacks to take place in spite of ample warning. “I want to believe that [the authorities] didn’t understand the severity of what was going to happen, or couldn’t keep tabs on each group, but it was so easy to document,” Kol said. “It takes a concerted effort not to monitor this stuff.”

These users’ behavior fits the legal definition of incitement—and, indeed, some went on to commit severe violence, beating civilians like Moussa Saeed in Bat Yam nearly to death. The lack of official response shows that, as Eghbariah put it, “there are provisions for Jews and provisions for Arabs. Very few [Jewish Israelis] are actually incarcerated for these kinds of things.”

Israeli authorities aren’t the only ones who impose a double standard on the digital activities of Jews and Palestinians in Israel/Palestine. The algorithms social media giants rely on to flag speech are often unable to distinguish incendiary from innocuous content. As a result, they may flag Arabic words like “shahid,” or martyr, even if they appear quoted in a poem or song lyric with no reference to violence, or confuse the name of a Palestinian user—for example, “Qassam”—with the name of a militant organization, such as the Qassam Brigades. For this reason, Nadim Nashif, the executive director of 7amleh, has described Palestinian social media users as being “doubly moderated.” This May, 7amleh indexed 500 cases in which Palestinian users reported that social media companies had violated their digital rights, including by flagging or removing their posts and banning their accounts.

7amleh has responded by calling on companies to repeal their decisions, pushing for the reinstatement of tens of thousands of censored profiles, tweets, and photos. But social media platforms are ill-equipped or unwilling to respond to such appeals. Requests for repeals go unanswered, and messages about meetings are ignored. 7amleh produces an annual report that monitors anti-Palestinian hate speech online, but its findings haven’t seemed to influence the behavior of the tech companies. When it comes to the repression of Palestinian speech, “we keep seeing more of the same, if not things getting worse,” Carmel said.

Palestinians facing incitement charges are sometimes banned from speaking to the press or posting on social media until their trials conclude, according to Adalah, which can leave them shut out of the public sphere for months. Mohammed Kana’neh, who emerged from detention on July 14th, a month after he was arrested, was ordered to remain under house arrest at his home in northern Israel for the duration of his trial. The prosecution is appealing the decision to release Kana’neh, attempting to return him to prison. In the meantime, the Jerusalem Magistrate Court has barred Kana’neh from accessing the internet, conducting interviews, or speaking before any audience. Even as many celebrate a new era of online activism, in his case and others, Israeli authorities are censoring Palestinians’ speech, shutting them out of public space online as well as off.

Sophia Goodfriend reports on automated surveillance and digital rights from Tel Aviv. She is a PhD candidate at Duke University.