What’s In It For Trump 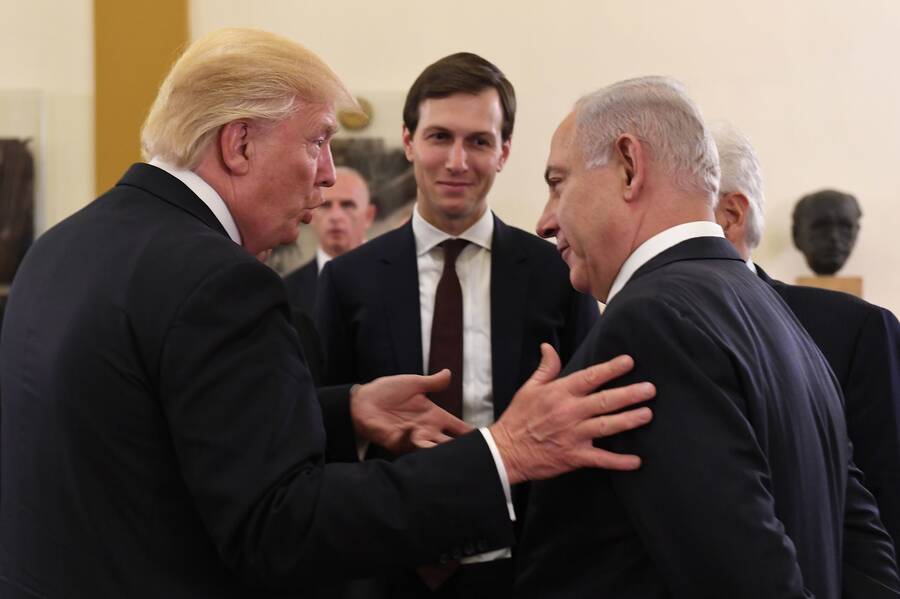 DONALD TRUMP may, as some speculate, have unveiled his Israeli–Palestinian “peace plan” to distract from his ongoing impeachment trial. But the two are connected by more than mere circumstance. In fact, they tell the same story about the way the Trump administration functions. Trump isn’t making foreign policy to benefit the United States. He’s making it to benefit himself.

National interest is never self-evident. But there’s a crucial distinction between policies intended to benefit the country and policies intended to benefit—either financially or politically—a given leader. The federal government has institutions aimed at safeguarding that distinction. It’s why cabinet members like the secretary of state and secretary of defense swear to “support and defend the Constitution of the United States,” rather than the president who appointed them. It’s why the president can’t pay them out of his own pocket. It’s why the US has a professional, nonpartisan foreign service.

Trump—more than any president in modern US history—has circumvented these safeguards. He delegated Ukraine policy to his personal lawyer, Rudy Giuliani (and Giuliani’s henchmen), and to a major donor with no foreign policy experience, Ambassador Gordon Sondland, and he empowered them to bypass, undermine, and even threaten Marie Yovanovitch, the career diplomat who represented the US in Kyiv. He did so precisely because Yovanovitch was pursuing the US national interest as defined by Congress, which had included $391 million in military aid to Ukraine in the 2019 budget. Giuliani and Sondland subordinated that national interest to Trump’s personal interest: withholding aid to pressure the Ukrainian government to launch an investigation that damaged Joe Biden, Trump’s political rival. In her congressional testimony, former National Security official Fiona Hill noted that while she was “involved in national security foreign policy” toward Ukraine, Sondland was involved in a “domestic political errand” on the president’s behalf.

Trump’s Israeli–Palestinian “peace plan” similarly subordinates the national interest to Trump’s personal one. Just as Yovanovitch and Hill were cut out of US policy to Ukraine, the Trump peace plan was, as the New York Times reported, hatched “secretively” by Trump’s son-in-law, Jared Kushner, outside the normal policymaking channels that involve regional experts at the State Department and National Security Council. Like Giuliani and Sondland in Ukraine, Kushner has no diplomatic or academic experience in the Middle East. But, in addition to being Trump’s son-in-law, he is intimately familiar with the president’s political needs: He’s overseeing Trump’s 2020 reelection campaign. Another key participant in drafting the proposal was David Friedman, who became Trump’s ambassador to Israel after representing his bankrupt casinos.

As one might expect from a document created by a family member-cum-campaign advisor and a former business associate, the Trump “peace plan” serves Trump’s personal interests far better than it serves the country’s. It doesn’t serve the US’s interest in solving the Israeli–Palestinian conflict because it has virtually zero chance of being adopted: Not only were Palestinians not consulted about the plan’s contents, but they have responded to it with near-unanimous outrage. Israeli security officials worry it “will be remembered as one of the causes of a violent outburst resembling the first and second intifadas.”

In addition to exacerbating the bleak status quo in Israel/Palestine, the plan also further corrodes the US’s dismal image in the Middle East. The Jordanian government—perhaps the US’s most steadfast ally in the region—has already denounced Trump’s proposal, and there are fears that violence will break out there too. Hawks often claim that the Arab world no longer cares about the Palestinians. But while that may be true of certain corrupt, tyrannical regimes, polling suggests that ordinary Arabs still care a lot. Indeed, this may be one reason that their views of US foreign policy, which were already profoundly negative, have grown even dimmer since Trump took office.

For Trump, however, all of this is beside the point. The goal of his Israeli–Palestinian proposal—like the goal of the Ukraine policy that led to his impeachment—isn’t to bolster US credibility overseas. It’s to bolster his reelection chances at home. Just look at who the White House invited to the announcement ceremony. The audience included no Palestinian leaders at all. But it did include Sheldon Adelson, who was among Trump’s biggest campaign contributors in 2016 and who will likely be a major source of campaign cash in this cycle. Since Trump became president, Adelson has met with him or visited the White House at least six times, and Trump has personally lobbied the Japanese government on behalf of Adelson’s casinos. Asked about Adelson’s influence in the Trump administration, Craig Holman of the good government group Public Citizen told ProPublica in 2018, “I’ve never seen anything like it before, and I’ve been studying money in politics for 40 years.”

Representatives of another Trump power base also showed up at yesterday’s ceremony: the “distinguished pastors” of the evangelical right the president thanked in his remarks. Ralph Reed, the former Christian Coalition leader who has written a book praising Trump, was among the invited guests; meanwhile, the day before the announcement, the White House hosted a key evangelical leader, Mike Evans, for a briefing on the plan. Just days before that, Trump became the first president to address the annual anti-abortion March for Life. This timing is not a coincidence. The unveiling of his plan for the Middle East, like his vocal opposition to abortion, aims to motivate his Christian conservative base in preparation for this fall’s campaign. As Mairav Zonszein has noted, Trump’s policy on the Israeli–Palestinian conflict—like his judicial appointments—is perfectly tailored to reflect the sensibilities of right-wing Christian Zionists.

One reason Trump can so easily subordinate US national interest to his own personal interest is that he entered the White House with little knowledge—and few convictions—about the Israeli–Palestinian conflict. When Jewish activists pressed him on the subject before the New York primary in 2016, journalist Uriel Heilman wrote that Trump’s “non-answers made him sound like a high school student trying to fudge his way through an oral exam.” Asked for his views on settlements, he deferred the question to his-then real estate lawyer, Jason Greenblatt, who later became his chief Israel/Palestine negotiator. Soon after taking office, when asked which political arrangement might bring peace, Trump replied, “I’m looking at two-state and one-state, and I like the one that both parties like.”

But that’s a lie. Trump doesn’t care what outcome the Palestinians like. He likes the outcome that best serves him personally. And just as he demanded last year that the US host the G7 summit of world leaders at his private hotel, he can’t, or won’t, distinguish between what serves him and what serves the nation. The driving force behind Trump’s “peace plan” isn’t ideology. It’s narcissism. In the Trump era, US foreign policy now turns on one question above all else: What’s in it for me?

Analysis
Israel’s Ascendant Far Right Can’t Be Understood by Analogy
In other countries, the right clashes with the center over the basic nature of the state—but Israel’s Itamar Ben-Gvir and his rivals are on the same page about ethnocracy.
Peter Beinart
Analysis
Progressive Groups Need a New Approach to Fighting AIPAC
Unless left-wing groups band together, Congress will grow even more hostile to Palestinian rights and other progressive priorities.
Peter Beinart
Sign up for our email newsletter, featuring exclusive original content
Want original reporting and analysis on Israel/Palestine?
Sign up for the Tuesday News Bulletin.