We’re Still Living Through the Aftermath of January 6th

The Capitol Riot was an extreme manifestation of the right’s decades-long efforts to subvert democracy. 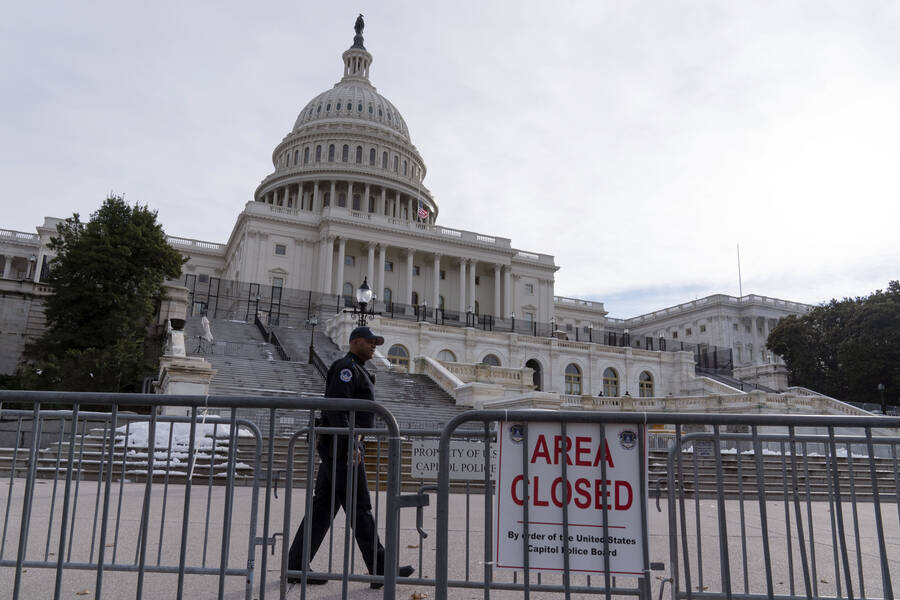 TODAY MARKS ONE YEAR since the January 6th Capitol riot. It’s tempting to dismiss the events of the day itself as little more than a farcical spectacle: A crowd of angry, costumed Trump supporters picked a fight with Capitol police, chanted unhinged conspiratorial slogans, befouled the halls of Congress, and threatened to overturn what they baselessly regarded as a stolen election before facing arrest. No members of Congress were physically harmed, although many were emotionally traumatized, and leaders of both parties condemned the rioters and proceeded to certify the electoral vote count, recognizing Joe Biden as the legitimate president-elect. Even Donald Trump, who had incited the riot in the first place, eventually called on his supporters to stand down—apparently urged to do so by members of his own family in consultation with some of his favorite Fox News personalities. In the weeks that followed, Trump was stripped of his social media accounts, Biden was sworn in, and Democrats took control of the Senate by a bare majority. It was possible to argue that the whole thing had been a pathetic last gasp of the Trump era.

But with a year’s hindsight, that analysis looks naive and inadequate. Hundreds of protesters are still facing federal prosecution, while the one protester shot and killed on the day itself, Ashli Babbet, has become a martyr on the right (three other protesters died in the riot, respectively from a heart attack, a stroke, and being trampled; five police officers also died in the aftermath, one from a stroke and four by suicide). The rioters themselves may pay a price for their actions, but the politicians who urged them on—above all Trump himself, but also sitting Republican members of Congress, from apologists like Sens. Josh Hawley and Ted Cruz to outright enthusiasts like Reps. Matt Gaetz and Marjorie Taylor Greene—have faced no legal consequences at all, and continue to reap political benefits from their association with the day’s events. Trump was acquitted on partisan lines after facing impeachment a second time for calling for an insurrection, and the few Republicans who supported holding him accountable, like Rep. Liz Cheney, have been ostracized by the party. Now, two-thirds of Republicans falsely believe that Biden won due to voter fraud, and Trump, who has never actually conceded defeat, is the prohibitive favorite for the 2024 Republican nomination; the distant second, Florida Gov. Ron DeSantis, downplayed the January 6th events this morning and said they were being used to “smear” Trump supporters.

It’s no exaggeration to say that the GOP today remains overwhelmingly committed to Trump, to his insistence that the 2020 election was stolen, to whitewashing or even outright glorifying the January 6th rioters, and, most significantly, to ensuring that future efforts to overturn a Democratic presidential victory are more successful. The past year has seen sweeping, coordinated legal efforts by Republicans across the country to undermine elections and disenfranchise Democrat-leaning communities of color. In addition to their ongoing and accelerating attempts to restrict access to voting, Republican state legislatures are introducing, and in many cases passing, bills to shift oversight of election results from nonpartisan state election boards to partisan Republican operatives. In nearly half the states, Democrats have essentially no political leverage with which to resist these efforts. As a result, a growing chorus of political scientists is warning that the next presidential election may be fundamentally illegitimate, and that eruptions of mass violence are likely to be a more prominent feature of American political life for the foreseeable future.

On the left, reactions to January 6th have sometimes been characterized by ambivalence. In a staff roundtable published less than a week after the riot, some of us at Jewish Currents (myself included) were concerned about how the carceral state might expand as a result of the political and media elite’s apparent bipartisan revulsion at the protesters, and how its force might be brought to bear on left-wing as well as right-wing protesters. Coming on the heels of the Black Lives Matter uprisings of 2020, which pitted cops against protesters (characterized in many instances as rioters) fighting for racial justice, those anxieties were and remain valid, and in that context it’s understandable why some voices on the left have resisted calling the day’s events a “coup” or treating them as a watershed in US history. What was less clear at the time, at least to me, was that the GOP’s immediate repudiation of Trump and the riots would be a very brief aberration; in fuller relief, January 6th was an extreme manifestation of the right’s decades-long efforts (perhaps most successful during the contested 2000 presidential election) to subvert democracy and cement minority rule. Far from having peaked a year ago, those efforts continue to accelerate.

In an astute Twitter thread earlier this week, Jewish Currents contributor Brendan O’Connor laid out the nationalist and white supremacist roots of the riot and its threat to any kind of democratic governance, however imperfect; admonishing fellow leftists who have downplayed January 6th, he added that “dismissing the rising threat of fascism simply [because] the libs are also freaking out about it is Not Very Materialist of You.” Pedantic debates over the historical applicability of words like “fascism” and “coup” can end up distracting from the unsettling reality that existing democratic institutions in the United States are being actively eroded by racist and xenophobic right-wing forces. Far from uniting the bipartisan neoliberal consensus in sustained disgust against them, as I myself argued at the time, the politicians and pundits who incited the January 6th riots retain their influence and their positions, and the conspiratorial lies they have spread around the 2020 election have been rapidly mainstreamed, even as the frontline rioters themselves have been treated as expendable. As Emily Tamkin writes, the January 6th attacks never really ended, and today should serve less as an anniversary than as a reminder that the threat remains very much alive.