We Will Protect Each Other 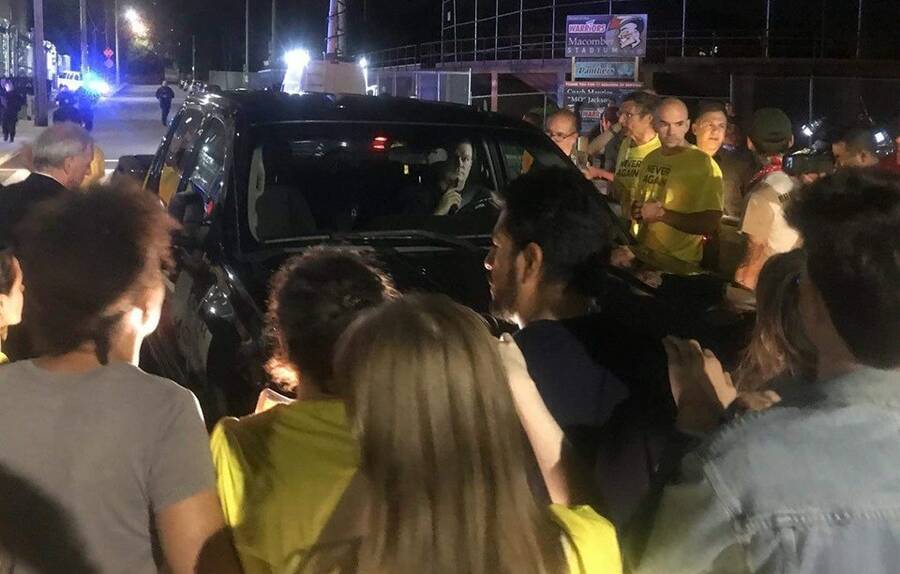 MY MOTHER WAS AN ACTIVIST. During the ’80s and ’90s, when Central American refugees came to the US fleeing death squads, she taught English and citizenship classes at Progreso Latino, an immigrant advocacy group in Central Falls, Rhode Island. While she taught her students, I watched their children in the daycare center. Over the past years, I have cried many times as I pictured the kids I used to play with languishing in cages and weeping for their parents.

My mother died last December, after a long battle with dementia. I know that if she were alive and well, she would be doing everything in her power to oppose our government’s abuse and torture of immigrants. I know she would expect no less from me.

For the last six weeks, I have been involved with Never Again Action, a Jewish-led movement to end the egregious practices of Immigration and Customs Enforcement (ICE) and to shut down their camps and detention centers. On Wednesday night, I participated in a peaceful Never Again protest at the Donald W. Wyatt Detention Center in Central Falls—a private detention facility where immigrants are currently being held—which turned violent when a corrections officer drove his truck through a line of protesters as they blocked the entrance to an employee parking lot. Several other corrections officers quickly arrived and pepper-sprayed the already-distraught crowd. A woman in her 70s was taken to the hospital after a corrections officer deployed pepper spray inches from her face. Two of Never Again Action’s organizers were pepper-sprayed while escorting another participant to get medical care. Altogether, five activists went to the hospital.

As all this unfolded, the Central Falls police on the scene simply stood by and watched. They did not detain the corrections officer who used his car as a deadly weapon. They did not try to stop the Wyatt guards who assaulted us with pepper spray. When people approached them, asking to give statements about what had happened, the police turned them away, claiming it wasn’t necessary. After the attack, as our medic team attended to the injured—including a protestor lying motionless on the sidewalk, eyes screwed shut, covered by a mylar blanket—I watched as a group of corrections officers laughed at us from their vantage point in the prison yard.

I wondered: If the Wyatt’s corrections officers feel comfortable committing acts of violence against a crowd of peaceful protesters in the presence of police and news cameras, what does that reveal about how they’re treating their inmates—especially the immigrants being detained by ICE? What is going on inside prison walls, hidden from legal observers and the media? We already know that an ICE detainee died in their custody due to gross medical negligence in 2008, at which point ICE canceled all of their contracts with the Wyatt. But the contract was renewed earlier this year, as ICE raids have ramped up under the Trump administration. The corrections officers’ despicable behavior Wednesday suggests that little has changed at the facility.

Over one hundred migrants are currently being detained at the Wyatt under its contract with ICE. According to local immigrant advocacy group Alliance to Mobilize Our Resistance (AMOR), which has held several protests at the Wyatt, the detainees’ bonds have been set excessively high—between $25,000 and $45,000. The prison is not being forthcoming as to whether detainees are getting the legal counsel, health care, and pastoral resources to which they are legally entitled, and it has limited local immigrant advocacy groups such as AMOR from connecting the detainees with these resources since they arrived at the Wyatt in March. Reports from people who have gained access to ICE detention centers around the country describe numerous human rights violations. The Wyatt’s blatant lack of transparency raises alarms.

The Rhode Island affiliate of Never Again Action has held two actions at the Wyatt, one in July and one on Wednesday night. Both were peaceful acts of civil disobedience. We did everything we could to disrupt ICE’s operation while respecting the community of Central Falls. We scheduled our action for a day without visiting hours. We blocked a parking lot entrance, rather than the street. Our team even took great care to ensure that no one antagonized the police; when I saw someone holding a sign deriding the cops, I convinced him to put it away.

All the Central Falls police had to do was their job: those of us who were blocking the entrances were prepared to be arrested. Instead, the police stood idly by while corrections officers committed acts of violence, escorted the officer who drove into us into the Wyatt, then refused to take our statements. I can only conclude that the Central Falls police and the Wyatt’s corrections officers wanted to scare us—that they have come to view our peaceful human rights movement as a threat to the system of state-sanctioned cruelty and violence they maintain, and they want us to know they are prepared to punish us with extrajudicial violence. This is the first such instance in the dozens of protests Never Again Action has staged over the course of the summer, and it’s difficult not to wonder if it’s a sign of things to come. But their attempt to frighten us away has backfired. Since Wednesday night, those who participated in this action have expressed their renewed commitment to this fight, and others who have been on the sidelines have joined us. Rabbis have offered to provide spiritual counseling to those of us feeling the traumatic effects of the attack. Our senators and governor have expressed outrage at the incident.

We will continue our work until the ICE deportation machine has been shut down and the atrocities at the border and in detention centers throughout the United States, including the Wyatt, come to an end. Thousands of children have been separated from their families and are languishing in inhumane conditions. Twenty-five people have already died in ICE custody. We refuse to accept this as business as usual.

The state of Rhode Island has already opened an investigation into what happened at the Wyatt on Wednesday night.  The corrections officer who drove his car through our line has been placed on administrative leave. We hope that this investigation will lead to greater scrutiny of the Wyatt’s treatment of its inmates, especially its migrant detainees, who are particularly vulnerable. On Wednesday night, after the corrections officer plowed into the line of protesters, I stood in front of another car that subsequently tried to drive through the line of protesters blocking the other entrance to the employee parking lot. I maintained eye contact with the driver, repeatedly reminding her that we had written down her license plate number until our people were safely out of the way. I didn’t think about what I was doing at the time; when people need protecting, we protect each other. My mother taught me that.

Eve Condon is a member of the coordination team for the Rhode Island branch of Never Again Action and a behavioral health peer recovery activist and educator in Providence, Rhode Island.