A Palestinian Filmmaker Asks: What Do Fathers and Sons Owe Each Other?

In Annemarie Jacir’s Wajib, a family considers what it means to build a life. 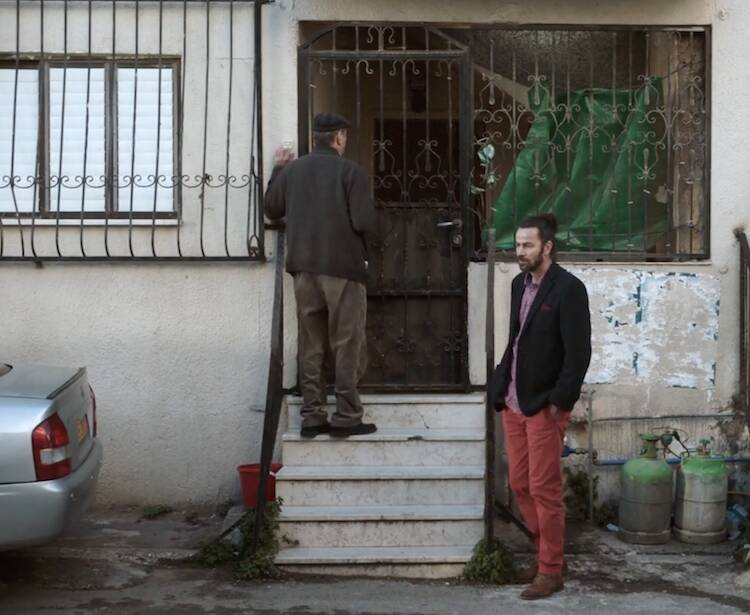 A MAN SITS ALONE in his car as the radio discusses the logistics of funerals happening in town this week. So-and-so is being buried at the mosque at this time, another at the church tomorrow. There is a thread of death running through the film Wajib (“duty” in Arabic), which opens at the Brooklyn Academy of Music this weekend as part of a series of works by Palestinian filmmaker Annemarie Jacir, but the questions posed to us aren’t really about death at all. What do sons owe to their fathers? What are fathers obligated to provide for their children? And how can they fulfill their duties to each other across the distance of diaspora and under the constraints of Israeli rule?

The film follows a father and son for one day as they drive all over the Palestinian-majority city Nazareth in northern Israel. Played by real-life father and son Mohammed Bakri and Saleh Bakri, the pair struggle with one another as they fulfill their visiting duties with family and friends invited to the wedding of daughter and sister Amal. The son, Shadi, is living abroad in Italy with his girlfriend, the daughter of an exiled Palestinian Liberation Organization leader. His father Tarek Silsal, referred to almost exclusively by the customary title Abu Shadi, is a teacher who is greeted by former students throughout their travels across the city.

In their conversations with family members and friends throughout the day, both father and son are confronted with the stories that they tell about themselves and each other. In one home early in the film, Shadi discovers that his father has told the family that he is a doctor and is planning to move back to Nazareth soon. As he angrily reminds his father as they drive away, he is an architect, has a girlfriend in Italy, and no intention of coming back. Both men eschew offers of cigarettes at multiple homes, only to smoke alone in secret, and later, together in silence.

The portrait of a Palestinian city in Israel is full of reminders that life here is not normal. “Does no one pick up the trash in this city?” Shadi grumbles about the overflowing dumpsters along the streets. “At least we have a municipality,” replies his father. There is no land left in Nazareth, laments Abu Shadi while discussing his daughter’s impending move with her soon-to-be husband. In the falafel shop, Shadi glares at the soldiers who come in on a Saturday to enjoy Palestinian hummus.

There are no Jewish Israeli characters in the film beyond the soldiers in the shop. Abu Shadi’s mentioned-but-never-encountered boss Ronnie Avi sparks the most serious confrontation of the day between father and son, whom Shadi accuses of being a spy reporting on Arab schools to the government.  “You don’t know what it’s like here,” Abu Shadi yells at his son, explaining why he must invite Avi, both his friend and the man who holds the key to his promotion from teacher to headmaster. In exchange, Shadi accuses his father of compromising, of ceding to the indignities of a life surveilled and controlled by Israeli authorities. We learn that Shadi was sent abroad at some point in his education, after an incident when a visit at home from Ronnie Avi landed him in harsh questioning by the Israeli authorities over the political content of his school film club. Abu Shadi is convinced that he has done what he needed to do to make a life for his children, but here is his son, yelling back that this, being Palestinian in Israel, is not a life. Ultimately, Shadi and his father are confronted with the reality that life is not in their control, and all they can do is try their best for each other.

Wajib is playing at the Brooklyn Academy of Music from October 5th to 11th, alongside Salt of the Sea (2008), When I Saw You (2006), and short films Like Twenty Impossibles and Summer 2006. Filmmaker Annemarie Jacir will speak on Sunday evening after a screening.

Office Hours
Office Hours: Dorothy Zellner
“You can spit in the soup.”
Naomi Dann
Conversation
‘We Are Always Met With Violence’: Gaza’s March of Return At One Year
Activist Jehad Abusalim reflects on Gaza’s 2018 protests.
Naomi Dann
Sign up for our email newsletter, featuring exclusive original content
What’s good?
Signup for our weekly Shabbat Reading List for recs on what to read—and why.