The grad student union’s three-day work stoppage was a demonstration of power. 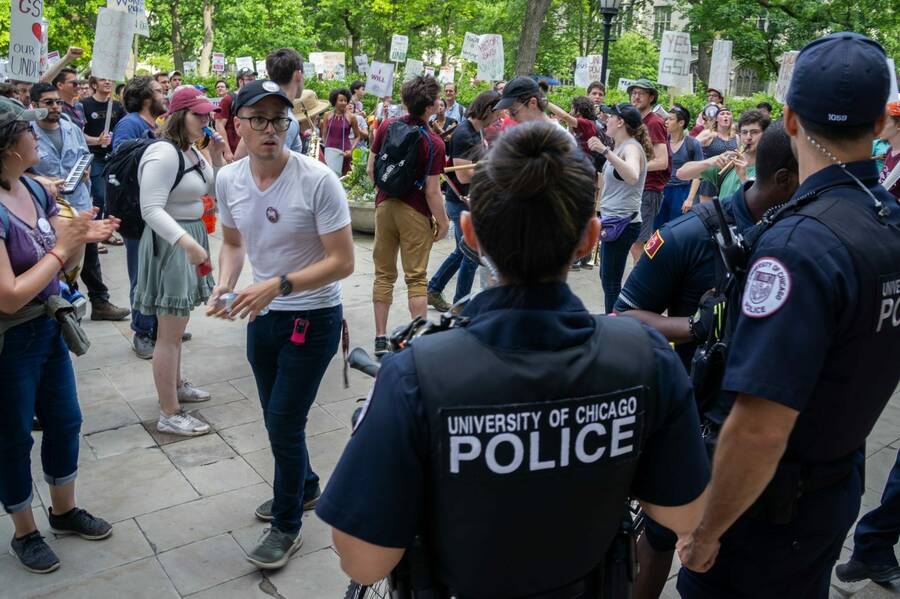 AS ROBERT ZIMMER, the president of the University of Chicago, toured prestigious Wuhan University in China and received an honorary professorship from the school, graduate students back in Chicago picketed more than ten campus buildings and an entrance gate for the third day in a row, slowing the stream of undergraduates attending class to a trickle. The industrial action—a type of wildcat strike—comes after years of organizing around a more than two-to-one vote to form Graduate Students United (GSU), a union that has not been recognized by the administration. UChicago has poured money into expanding its foothold in Asia—announcing the opening of its Hong Kong campus late last year—even as back home, students’ basic stipends start at $27,000.

During the final week of classes in UChicago’s fast-paced quarter system, the sidewalks crisscrossing the quad are usually crowded with foot traffic of students rushing to class. Monday and Tuesday were different. GSU shared photos of empty classrooms on social media. Each morning this week, over 200 protesters gathered around campus buildings and at key arteries of campus traffic, holding picket lines. A popular chant rang out at the pickets: “Get Up. Get Down. Chicago is a union town!” A trickle of students crossed picket lines to get to class, but most undergrads either stayed home or joined the picket lines themselves. Many classes were cancelled altogether.

The GSU picket lines come as the latest of several recent labor actions at universities across Chicago. Graduate students at the University of Illinois, Northwestern, and Loyola University all held strikes, walk-outs, or industrial actions this semester. Three days of action at UChicago have seen big wins: notably, a mobilized campus, the blockade of the campus’s major arteries, and a shout-out from Bernie Sanders. Several cafes closed down. On Monday afternoon, the faculty of the Anthropology Department issued a statement of solidarity on the department website, and urged faculty members in other departments to join them.

Despite years of refusing dialogue with graduate workers, Zimmer, who has branded himself as a custodian of free speech, announced to his hosts in China that “dialogue is absolutely critical to any good and effective education.” One day before the strike, Dean of Students Michele Rasmussen reiterated the university’s free speech policy, emphasizing that although the university encourages “open discourse,” it does not tolerate “threatening and harassing behavior.” She ended the email by dropping the phone number for campus cops and urging students to call the number, without saying explicitly what the phone number was. The morning of the strike, UChicago’s news site published a glossy feature story boasting about the exceptional teaching contributions of graduate students. The article made no mention of these students’ very public labor struggles happening right outside the campus gates.

Vague language of this variety has been a specialty of the administration. In emails, administrators are at pains to avoid using the name of the union—or to acknowledge any “work” as such. On a basic level, they seem intent on denying that people who do work for them are workers. Instead of referring directly to the student union, in an email Dean of the College John Boyer urged “graduate-student members of our teaching community” to uphold their responsibilities to college students. Boyer also emailed undergraduates and their parents, telling students to continue attending classes and to report instructors who do not respond to email.

These letters did not go over well. Students circulated countless “corrected” versions of Boyer’s letter on a Facebook page called “UChicago Memes For Theoretical Midwest Teens.” Boyer and Rasmussen were the butt of every other meme on the page. In reaction, a student posted the cost of annual tuition, insinuating that their high payment to UChicago entitled students to classroom time regardless of the strike. This only provoked a pile-on of support for the strikers. “You’ll learn way more on the picket line than in any class not being taught,” said one poster. Indeed, once the strike began, it was clear that the campus was largely mobilized in support of the graduate students.

Sam Joyce, a junior in environmental and urban studies, has worked alongside a coalition of student groups for years to solicit undergraduate support. “We’ve hosted a couple teach-ins about graduate labor and labor issues more broadly. Our most recent, in advance of our campus-wide May Day march, focused on the history of May Day and its relevance today,” he said.

In the few public statements they’ve made on the union issue, administrators have argued that union intermediation would not be limited to economic demands, but would bleed over into academic life, with grads demanding more of a say in how their departments are run, thus corroding the quality of academic instruction. Collective bargaining, by its very nature, Zimmer and Provost Daniel Diermeier wrote in 2017, could even “compromise the ability of faculty to mentor and support students on an individualized basis.”

These arguments are nothing new; nearly every private university has read from the same playbook in national efforts to quash labor organizing. (Many even keep the same union-busting attorneys on retainer; UChicago’s firm, Proskauer Rose, also represented Columbia and Duke Universities.) The resurgence of the grad students’ demands now is partly due to the increasing precarity of academic jobs, and the increasing reliance on non-tenured labor.

During the strike, the administration has been notably quiet; there have been no university-wide emails since Monday. The only message from the university came in the form of the imposing presence of the University of Chicago Police Department—one of the largest private police forces in the nation—watching each picket in clustered groups of four or five officers. Deans-on-call, low-level administrators who act as resources to students during emergencies, also surveilled the picket lines.

Graduate students voted Wednesday evening at 6 pm on whether to continue the labor action. In the hours leading up to the vote, the scattered pickets lines grew so big that they formed one massive swarm. Chants overlapped in a discordant symphony. The union decided not to continue the action, but the growing support on campus showed that the next strike has the potential to be indefinite. “We have shown @UChicago, the world, and ourselves what we are capable of as a union, and how fundamentally the university depends on our work,” read a tweet issued from the GSU account. “[I]t’s time for the admin to recognize us.”

Chloe Watlington is the associate editor of Commune Magazine. Her other writing can be found there as well as Teen Vogue and The Baffler.

Lee Harris is a third-year undergraduate at UChicago studying history. This summer she will intern for the Wall Street Journal.