Elon Musk’s takeover of the site could destroy a valuable avenue for Palestinian activism. 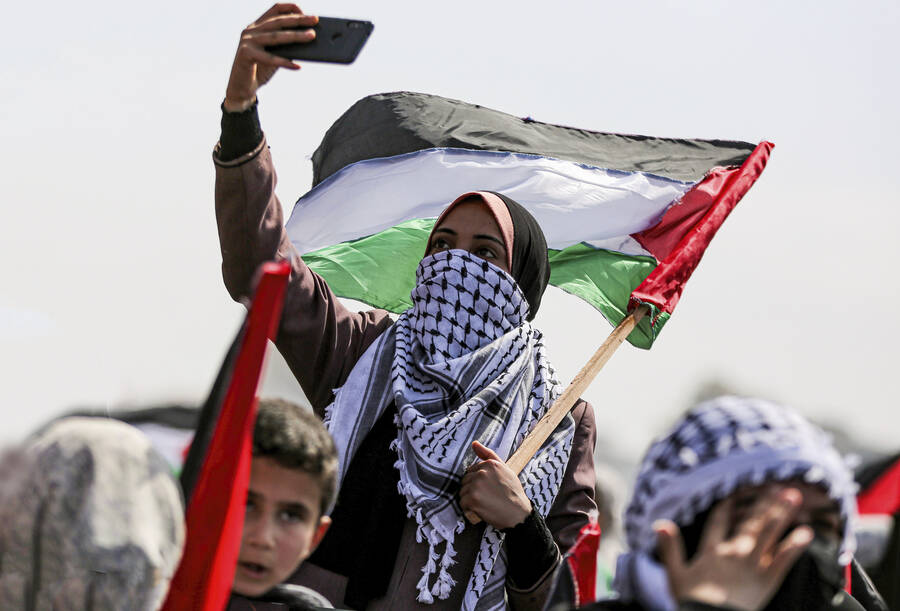 A woman takes a selfie while holding a Palestinian flag during a March 2022 rally in Gaza City.

On May 13th, after Israeli police attacked mourners at the funeral of slain Palestinian journalist Shireen Abu Akleh, the BBC’s official Twitter account posted its coverage of the incident, reporting: “Violence breaks out at funeral of reporter Shireen Abu Aqla in East Jerusalem[.] Her coffin was jostled as Israeli police and Palestinians clashed as it left hospital.” The passive voice jumped out at Sana Saeed, a host and senior producer at AJ+, who tweeted a revision of the British broadcaster’s language: “Israeli occupation forces attacked the funeral procession, beat mourners, caused her casket to fall to the ground,” she wrote, adding that she considered the BBC tweet “one of the worst obfuscations of Israeli violence yet.”

Her tweet struck a nerve, racking up 5,000 likes and over 2,000 retweets. The both-sides rhetoric of major news outlets like the BBC stood in stark contrast to the videos and photos of police beating Palestinian demonstrators that were then going viral on Twitter. “Even if the mainstream media and the Israeli press attachés and AIPAC and the paid hacks completely black [the video] out, it’s on alternative and social media,” the historian of Palestine Rashid Khalidi told Jewish Currents at the time. “You can say anything you want about bullets and Palestinian gunmen and the supposedly murky circumstances under which this woman was murdered, and they’re doing an incredibly effective job at that, but you cannot unsee this image.”

Over the past few years, Palestinian activists have used Twitter to share reports from the ground in Palestine and to call out media coverage that unquestioningly adopts the Israeli government’s line. Now, that platform is at risk: Twitter’s new owner, Elon Musk, has laid off more than half of its 7,500-person staff since he took control at the end of October and prompted 1,200 more to resign, raising fears that the site could soon stop functioning. “Twitter has been a lifeline for many Palestinians around the world, for civil society organizations and grassroots activists,” said Marwa Fatafta, who serves as MENA policy manager at the digital rights advocacy organization Access Now. “It has managed to connect an otherwise fragmented population: Palestinians from Gaza, Jerusalem, Europe, the US.” Mariam Barghouti, the senior Palestine correspondent at Mondoweiss, said that Twitter’s role in bringing Palestinians together is especially key considering the restrictions that Israel places on their freedom of movement: “It’s our only avenue for speaking with the world from under a military occupation that controls all our entry and exit points,” she said. “We’re left to share through soundbites of 280 characters. If even that is taken away, we’re looking at the slaughter of Palestinians in silence.”

Palestinian digital activism on Twitter has been especially effective in moments when violence on the ground has surged. Fatafta pointed to May 2021, when Israeli forces bombed Gaza for 11 days while Hamas fired rockets into Israel. “[Twitter] showed in real time the horrors and violence inflicted on Palestinian families in Gaza,” she said. Palestinians also used the platform to push back against media coverage that ignored the broader context behind the bombardment, which began after Israeli settlers attempted to seize Palestinian homes in the East Jerusalem neighborhood of Sheikh Jarrah, sparking resistance and a response from Hamas. Even reporting that acknowledged this backdrop tended to gloss over the way that the evictions fit into a longer story of Palestinian dispossession, said Abdallah Fayyad, an opinion writer at The Boston Globe. Using Twitter, he said, “a lot of Palestinians were trying to contextualize that the violence erupting in [Sheikh Jarrah] wasn’t isolated—it was about the forcible removal of people from their homes and land as part of a longer pattern that has existed for the better part of the last century.”

Fayyad said he believes these efforts pushed mainstream outlets to bring in more Palestinian voices, which have been systematically marginalized: CNN aired an interview with writer, activist, and Sheikh Jarrah resident Mohammed el-Kurd about his family’s resistance to dispossession, while The New York Times commissioned op-eds by Gazan translator and editor Basma Ghalayini and Palestinian American writer and scholar Yousef Munayyer. “I don’t think we would’ve seen these Palestinian bylines, I don’t think we would’ve seen these Palestinian experts on TV, if it wasn’t for the attention that the anti-Palestinian bias of media outlets was getting on Twitter,” Fayyad said.

At the same time, ​​Twitter, like other social media companies, has often censored Palestinian speech. In May 2021, Barghouti was covering the protests that spread across Israel/Palestine, known as the Unity Intifada—and their repression by the Palestinian Authority and the Israeli government—when her Twitter account was briefly suspended. (Twitter later apologized and said the suspension had been an accident.) That month, 7amleh, a Palestinian digital rights advocacy organization, collected information from 500 Palestinian social media users who reported that their posts had been unfairly flagged or removed, or their accounts banned, during the escalation in violence. Even in less heated times, those who speak out about Palestine can expect to face significant harassment: “We get death threats through these platforms,” said Barghouti. “They impact me negatively for sure. It’s cyberbullying, and it’s being allowed.” Some of the harassment is coordinated by the Israeli government itself, which has sponsored initiatives that encourage Israel advocates to bombard Palestinian activists with “pro-Israel” memes and troll responses.

Twitter can also pose internal challenges for activists. Dana El Kurd, an assistant professor of political science at the University of Richmond, said that since the unifying moment of May 2021, she has seen the Palestinian community become fragmented on the platform, breaking down along lines of political difference, geographic location, and relationship or lack thereof to the official NGO sphere. According to El Kurd, the culture of Twitter encourages “antagonism,” sometimes exacerbating this atomization: “Given the transnational characteristics of Palestine solidarity work, we rely on that online space—so the Twitter dynamics have an outsized effect,” she said.

The downsides of Twitter could intensify under Musk, who has reinstated accounts that promote hate speech, dismantled the team in charge of content moderation, and used informal public Twitter polls to make major decisions. As Fatafta put it: “If May 2021 were to erupt today, I’m not sure whether Twitter would be able to uphold the community’s freedom of expression and ensure their safety on the internet.” It’s not clear what Palestinian activists will do if Twitter continues to decline, though El Kurd said she hasn’t yet seen many leave the platform. As long as Twitter lacks an obvious replacement, Palestinians will probably keep relying on it to be heard.