Bernie Sanders’s use of the word “bigotry” to describe AIPAC is a gamechanger. 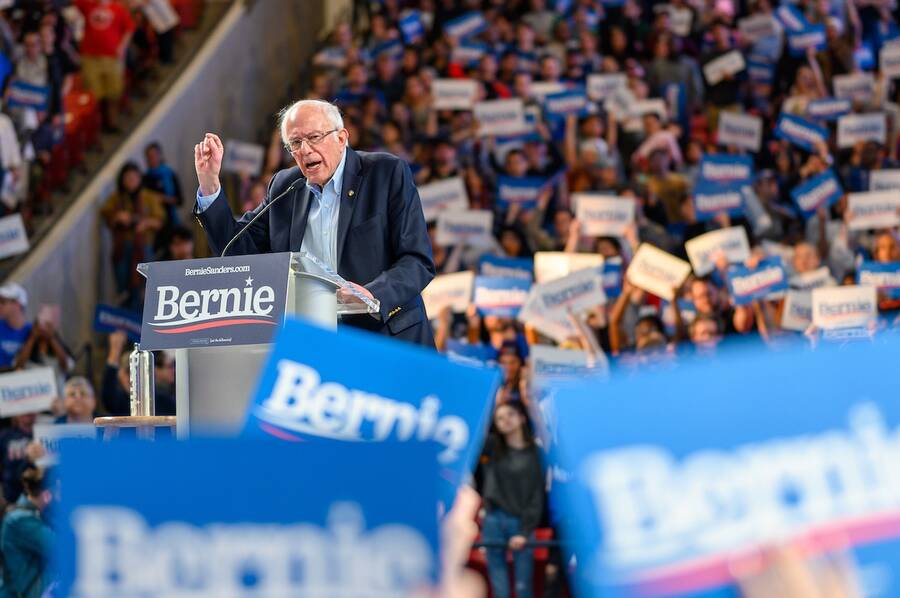 BERNIE SANDERS’S ANNOUNCEMENT on Sunday that he’ll be skipping AIPAC’s annual policy conference hardly came as a surprise. He didn’t attend in 2016, and his progressive rival, Elizabeth Warren, had already announced that she’d be a no-show. The Intercept had recently reported that AIPAC was indirectly funnelling money to the Democratic Majority for Israel, a lobbying group that has run ads calling Sanders unelectable. Candidates don’t generally appear before organizations that are trying to sink their campaigns.

More important than the fact of Sanders’s non-attendance is his justification for it. In his brief statement on Twitter, he accused the pro-Israel powerhouse of providing a “platform . . . for leaders who express bigotry and oppose basic Palestinian rights.” Those words hold the potential to transform the Democratic Party’s debate over Israel.

What makes Sanders’s statement radical is his use of the word “bigotry” in conjunction with Palestinian rights. In establishment American discourse, the category of anti-Palestinian bigotry barely exists. That’s been the case for decades—not only among Republicans, but even among progressive Democrats. In Barack Obama’s most comprehensive speech on the Israeli–Palestinian conflict, delivered in Jerusalem in 2013, he called Israeli policy in the West Bank “counterproductive to the cause of peace.” He warned that it threatened Israel’s character as a “Jewish and democratic state.” He even said that Palestinians have a “right to justice.” But Obama never used the word “bigotry” with respect to Israeli policy in the West Bank.

That’s because in today’s Democratic Party—which remade itself in the 1960s by supporting civil rights, and which has relied on the votes of historically oppressed groups ever since—bigotry is supposed to be unacceptable. When Democratic leaders label a position bigoted—whether it be stop-and-frisk or opposition to gay marriage—they’re signaling that it is no longer a subject of legitimate debate.

AIPAC understands this. It’s why the organization and its allies work so hard to affix the scarlet B to people who oppose Zionism or boycott Israel. And their efforts have proven remarkably successful. In 2016, the entire University of California system—which boasts roughly 500,000 students, faculty and staff—came within a hair’s breadth of declaring anti-Zionism to be antisemitism, which would have rendered most Palestinian political expression on campus a form of hate. Sooner or later, virtually every prominent defender of Palestinian rights in the United States faces charges that they are antisemitic—that is, bigoted—and thus beyond the pale.

But until Sanders did so this weekend, few prominent Democrats had acknowledged the elephant in the room: that Israeli policy in the West Bank is, in and of itself, an expression of bigotry. The bigotry isn’t subtle. In the West Bank, Israeli Jews live under Israeli civil law, which guarantees them citizenship, the right to vote for the government that controls their lives, due process, and free movement; their Palestinian neighbors, who live under military law, lack all of these rights. When Americans—especially Americans whose families have endured state-sponsored discrimination—see this reality firsthand, they often compare it to the dual system of law that operated in the US during Jim Crow. After visiting Hebron, Donna Edwards, an African American former representative from Maryland, remarked: “it looked like the stories that my mother and my grandmother told me about living in the [segregated] South.”

More than any other organization in Washington, AIPAC ensures that this institutionalized bigotry goes unchallenged. It forms alliances with US and world leaders who condone bigotry against Palestinians. And such people often excuse other forms of bigotry, too. Which explains why this year’s policy conference will offer a platform to a minister who accused Obama of being a Muslim, an apologist for Serbia’s genocide against Bosnians, and Rep. Steve Scalise, one of the members of Congress most hostile to LGBT rights.

AIPAC and its defenders recognize the potency of Sanders’s line of attack. To rebut it, AIPAC has issued a gauzy video, filled with people of color, that describes its members as “feminist,” “multi-ethnic,” “gay, straight, or bi” and “Jewish, Christian, Muslim.” Jonathan Greenblatt, CEO of the Anti-Defamation League (ADL), insisted, “It’s offensive that @BernieSanders denigrates the @AIPAC policy conference as a platform for bigotry.” Greenblatt isn’t shy about levelling accusations of bigotry himself. Last year, the ADL accused Rep. Ilhan Omar of antisemitism after she suggested that campaign donations are the source of AIPAC’s power. But Greenblatt recognizes that if Democrats begin applying the same moral scrutiny to the Israeli government’s defenders as they do to its critics, AIPAC and the ADL will find the Democratic Party a much less hospitable place.

That moral scrutiny is increasing now largely because of Israeli Prime Minister Benjamin Netanyahu. Every time Israel holds an election, Democrats notice that Netanyahu’s electoral strategy—demonizing Israel’s Palestinian citizens—resembles Trump’s strategy of demonizing Latinx people and Muslims in the US. Last April, then-presidential contender Beto O’Rourke called Netanyahu “racist,” noting that the prime minister “warns about Arabs coming to the polls.” Because AIPAC’s mission is to defend the Israeli government, it can’t easily break with Netanyahu, no matter how odious his behavior. But that association makes AIPAC more vulnerable to the bigotry charge. Earlier this month, after AIPAC compared Rep. Betty McCollum to ISIS for introducing legislation to protect the rights of Palestinian children, the Minnesota representative called AIPAC “a hate group.” Such language would have been unimaginable a few years ago.

Sanders is now making McCollum’s language mainstream. With one short statement, he has exposed the basic contradiction underlying AIPAC’s work. AIPAC exists to defend the Israeli government in Washington. To do that effectively, it must wield influence in both parties. And yet the Israeli policies AIPAC defends—which apply one set of laws to Palestinians in the West Bank and another to Jews—flagrantly contradict the Democratic Party’s stated principles. This moral contradiction isn’t complicated. It isn’t new. But no major presidential candidate has ever named it—until now. AIPAC’s relationship with the Democratic Party may never be the same.

Analysis
Israel’s Ascendant Far Right Can’t Be Understood by Analogy
In other countries, the right clashes with the center over the basic nature of the state—but Israel’s Itamar Ben-Gvir and his rivals are on the same page about ethnocracy.
Peter Beinart
Analysis
Progressive Groups Need a New Approach to Fighting AIPAC
Unless left-wing groups band together, Congress will grow even more hostile to Palestinian rights and other progressive priorities.
Peter Beinart
Sign up for our email newsletter, featuring exclusive original content
Want original reporting and analysis on Israel/Palestine?
Sign up for the Tuesday News Bulletin.