The Road to Trans Liberation 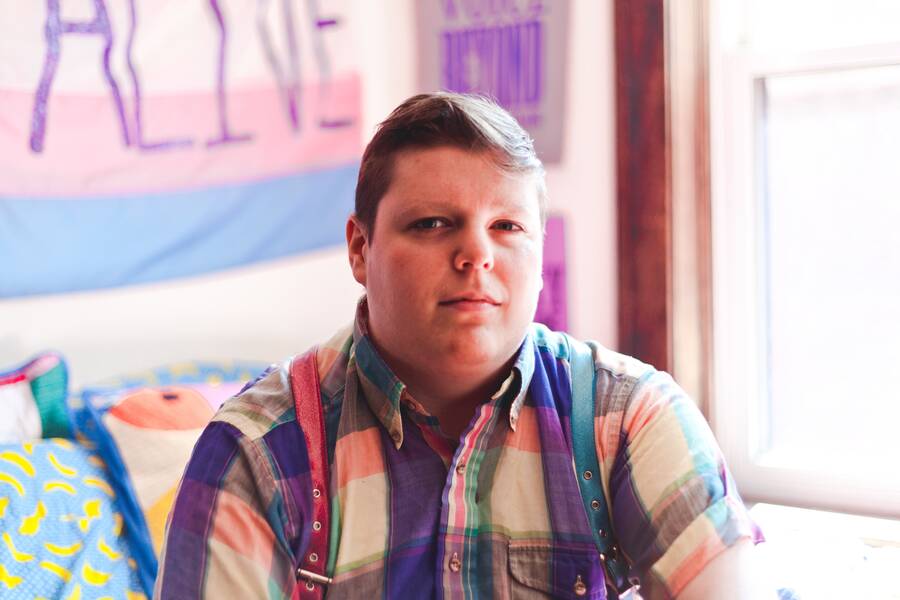 In the new chapbook On My Way to Liberation (Haymarket Books), Chicago poet H. Melt imagines an equitable world for trans people. Melt draws a connection to their Jewish grandfather, who dressed in women’s clothes during the Holocaust to avoid persecution.“For both of us, telling our stories is an act of liberation,” Melt wrote in the introduction. “I hope that our recounting of painful memories leads to a less violent future.”

Melt spoke with journalist Hannah Steinkopf-Frank about trans erasure, the Chicago poetry scene, and storytelling in Jewish communities. This conversation has been edited for length and clarity. You can also read a poem from Melt's chapbook, There Are Trans People Here, beneath the interview.

Hannah Steinkopf-Frank: With the federal government rolling back recognition and protections for transgender individuals, why is it important to explore a trans-inclusive future?

Melt: I write so the experiences of trans communities can't be erased, so people can understand trans experiences from actual trans people. So much of my personal frustration with a lot of the conversations about transness in the media is that these stories are written and reported by cis people. The idea that cis people can define what it means to be trans or define sex or gender—these are ideas that are seeped in white supremacy, colonialism, and Western ideals of what it means to be a person. They’re just an effort to limit people's imaginations and their daily experiences, and it has material consequences. It encourages this idea that trans people aren't real and aren't who they say they are. That leads to [trans people] not being able to get a job, not being able to have housing, not being able to find a lawyer, or mount a successful case when they’re discriminated against. It leads to things like trans people being criminalized.

HSF: How do you define liberation?

HM: I’ve been writing a lot about what trans liberation means to me. I think just articulating those ideas about trans people living and persisting and thriving into the future is a great way to confront this rhetoric. At the heart of it, I think trans liberation is similar to the liberation of all people, it’s interconnected. So issues like allowing trans people, and all people, to migrate wherever they need to, to cross borders freely. Allowing trans people to access shelters that correspond with their gender identity. It’s about breaking down these spaces in public and private life and in public services that are so attached to what your gender is. Liberation looks like being able to decide how your body looks and moves in the world, like having people respect the language you use to describe yourself. It’s having access to trans-inclusive education. It’s being able to grow up in a world where you're not afraid to walk outside every day.

HSF: How has Chicago inspired you as a writer?

HM: Chicago's poetry community, especially the youth poetry community, has had a huge influence on me, specifically in that it's introduced me to people from different neighborhoods and to people who identify differently, whether that's race, religion, gender, or sexual identity. All these people from all over the city come together, listen to each other's stories, and respect one another. It informs my idea of what the city looks like and gives me confidence that people who are not queer or trans can respect me. Chicago also has a rich queer and trans artistic community. I came up through underground performance spaces, bars, and queer party nights that had performance elements to them. Those were the first people who supported me. I got my skills as a poet and performer through Chicago’s poetry scene as I was building queer and trans community in these underground queer arts spaces, and that’s what really shaped me as an artist.

HSF: Can you tell me about the inspiration and writing process for the title poem in the collection, On My Way to Liberation?

HM: This is one of the most important poems to me in this collection, about my grandfather’s history of crossing gender norms in order to stay close to his family for a little bit longer during the Holocaust. It took me a really long time to write. I started it describing my experience of going to celebrate the anniversary of my grandfather’s liberation from the concentration camps. I had gone through a couple of drafts of the poem a few years ago, at that point there was something I didn’t really like about it. I think working with another queer poet, a teacher, Shira Erlichman, helped me to find the right ending for the poem—just making the connection between my grandfather and my current trans identity, that we have gone through similar acts of changing our names and changing our clothes, and people discriminating against us for who we are. That was a huge leap that I had to make, realizing that the poem was about liberation and our shared history.

My grandfather is one of the main storytellers in the family. From a young age, I knew he was a Holocaust survivor. He came to my classroom in high school and told his story; he has always been insistent on sharing his story. Remembering history through the perspectives of people who lived through it and specifically those who experienced oppression is incredibly important. I definitely inherited that tradition.

HSF: How does this chapbook relate to your full-length collection There Are Trans People Here, out next year?

HM: In the past, I’ve used chapbooks as a way to lean into a collection or figure out what direction I'm going as a writer. What became clear in writing this chapbook and assembling poems from the past several years is the shift from writing about cis violence and the ways I've been hurt by cis people to trying to heal and write into the trans future I want to see. There Are Trans People Here is going to focus on writing out that trans future in more detail—creating this vision of what trans liberation can look like, talking about all the different places trans people exist and all the ways we contribute to the world.

I encourage people in this moment and always to seek out trans voices and recognize trans people in their own lives, whether that's at their workplace or in their family, school, or neighborhood. Talk with those people. Listen to their stories.

There Are Trans People Here
After Jamaal May

When they say we are all
trapped in the wrong body
impostor, impossible. No.

Some of us are sex workers,
teachers, artists, nurses,
homeless, unemployed
and hungry too.

We are as real
and complicated
as anyone else.

But they won’t
stop murdering.
Stop legislating. Stop imprisoning.
Stop claiming we are ruining our
countries, families, friendships
and futures too.

When every day
we awaken to
build them
anew.

H. Melt is the author of The Plural, The Blurring, and On My Way To Liberation and has taught at the Museum of Contemporary Art Chicago, the Poetry Foundation, and Young Chicago Authors.

Hannah Steinkopf-Frank is a Chicago-based freelance writer and photographer. Her work has appeared in the Chicago Tribune, Atlas Obscura, Bitch Media, In These Times, Columbia Journalism Review, JSTOR Daily, and Paper Magazine, among others.