Dariusz Stola, former head of Poland’s Jewish museum, discusses the far-right national politics that ousted him from his position. 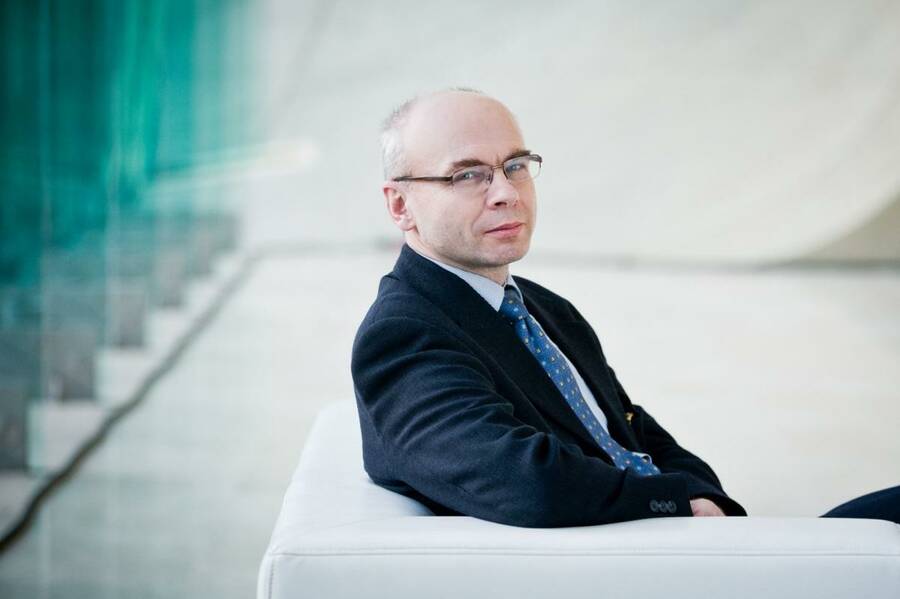 On February 14th, historian Dariusz Stola submitted his resignation as director of Polin, the Museum of Polish Jewish History in Warsaw, which he had led since its opening in 2014. After Stola completed his first term in February 2019, he won a competition to become the next director, and had the backing of two of the institution’s three founding bodies—the city of Warsaw and the Association of the Jewish Historical Institute of Poland. But Piotr Gliński, the minister of culture for Poland’s right-wing nationalist government, refused to authorize his reappointment; as a result, Stola has been officially unable to work at the museum since his previous term ended.

Stola had attracted the government's ire in 2018: first when he publicly opposed a proposed law that would have criminalized discussions of Polish complicity in Nazi atrocities, and again when a Polin exhibit drew connections between the Communist antisemitism of 1968 and the xenophobic rhetoric associated with the current ruling party, Law and Justice. After spending the past year waiting for an authorization that never came, Stola finally stepped aside to allow the museum to be led by his deputy, Zygmunt Stępiński.

A week after Stola resigned, he and I spoke by video chat to discuss the Polish government’s campaign against cultural institutions, which threatens the recent flourishing of the study of Polish Jewish history. This conversation has been edited for length and clarity.

Emma Saltzberg: Most Polish museums are public institutions, and their directors are government appointees. Polin is unusual in that it is a public–private partnership, and there are multiple stakeholders with some say in the future of the institution. How did the legal structure of the museum shape the fight over your reappointment?

Dariusz Stola: If we didn’t have such a complex legal structure, the minister [of culture] would have fired me two years ago, in the spring of 2018, when we had this major controversy about the so-called Holocaust complicity law. But the city and the association refused to consider firing me. So I would say that this legal structure gave me another year in the position.

Our museum is actually the third major historical museum that the ministry has tried to take over. The first one was the World War II museum in Gdańsk. Then the government tried to take over the European Solidarity Centre, the museum of the Solidarity trade union. And that museum also has a complex legal structure because it is a partnership between the [national] government, the city of Gdańsk, and a foundation. The city and the foundation very much defended the museum against the minister. At first he tried to prevent the reappointment of the director, Basil Kerski. And he failed. Then he demanded to have his own deputy director—kind of a political commissar—inside the institution. And they refused. Then he cut 3 million złoty [about $763,000] of subsidies. Friends of the museum called for a public fundraising effort, and within 48 hours people had collected 4 million złoty. So he set up a parallel institution with the same mission.

What happened was very clear: [the minister of culture] tried to take over, then he tried to break [the European Solidarity Centre] into two pieces, and when this failed, he established a parallel institution to make it compete for the same audience. It’s not so different from our case, actually, because in spring of 2018, the minister established the Warsaw Ghetto Museum.

ES: What is the government’s strategy behind these moves to take over museums?

DS: It’s part of a larger campaign to take over cultural institutions. This government understands the political importance of culture. Similar to the US, we have a cultural war. But in our case, the most controversial topics in this cultural war are historical topics, such as reactions to the Holocaust or the history of the Communist regime. What happened in 1989? Was it a big peaceful revolution, or was it a secret conspiracy between the Communists and the left? So you have competing narratives and rather heavy, aggressive propaganda coming from the government. And there is a clear tendency for them to put people they trust in charge of these institutions. And because they couldn’t call me and tell me what I have to do, they decided to get rid of me.

ES: I know there was a recent exhibit at Polin that featured comments from the current government that echoed antisemitic comments from 1968. It seems as though this government is engaging in antisemitism in the present while also attempting to erase it from the past. Is that a fair thing to say?

DS: No, no, this government is not antisemitic. This is the most pro-Israeli government we have ever had.

ES: In the US, we also have political parties claim that they can’t be antisemitic because they support the government of Israel. The Jewish left here sees that as antisemitic, and argues that it reinforces the idea that Jewish safety in the US is not as much of a priority as support for the Israeli government.

DS: I think it’s not just a question of relations with Israel, that if you have good relations with Israel it can absolve anything. During our previous elections, six years ago, Law and Justice clearly won on a very xenophobic ticket. It was shortly after the big refugee crisis in Europe, and there were widespread fears about masses of refugees coming across the Balkans. We actually have very few refugees in Poland, but the fear was quite widespread, and it was easy to capitalize on it. And according to sociological research, xenophobia is not very selective. So for example, if you hate Jews, there’s a high probability you hate Muslims, too—and vice versa. The refugee crisis brought a lot of anti-Muslim, anti-Arab prejudice. Such sentiments translate very easily into anti-Jewish sentiments.

As I said, I cannot accuse this government of antisemitism, because you have some nice statements by the president and by the prime minister, but at the same time, they clearly exploit xenophobic sentiments, and they tolerate new neo-fascist, antisemitic movements.

ES: There's been a real revival of interest among Jewish Poles and especially non-Jewish Poles in Polish Jewish history. What brought that about?

DS: It started off under the Communist regime in the 1980s. The 1970s was a bleak period in the history of Polish Jews because half of the community emigrated after ’68. So when I decided to write my dissertation, back in 1988, on Holocaust history, I had a feeling that all the Jews would die out—“It’s about to end soon, so someone must write this history now, it’s the last moment to write it.” I am not Jewish. But I decided to work in Polish Jewish history because I believed it was important.

And then miracles happened! When people ask me if I believe in miracles, I say, “I rely on them.” The miracles were, first, the erosion and eventual implosion of the Communist regime, and the democratic revolution of 1989. No one could have expected that. And the second miracle was that the end of the Communist regime included an emotional, intellectual, and moral turn away from the homogeneity of the Communist dictatorship. It involved a sentimentalist look back to the pre-World War II Poland, which was a very multiethnic country: ethnic Poles made up only about 60% of the population, and Poland had the largest Jewish community in Europe at that time—more than 3 million people. If you were anti-Communist when the regime ended, you were also anti-antisemitic, since the Communists had been antisemitic since 1968.

So there was a visible revival of Jewish cultural life in this tiny Jewish community. I know a number of people from Jewish families, including community leaders, who knew nothing about Jewish tradition and who were not very interested in Jewish history—whose parents and grandparents were Communists, secular, removed from Jewish communal life—who are now coming back to their Jewish identity. And then there was an emergent interest in Jewish things among non-Jewish Poles like me.

ES: And how has that renewed interest in Polish Jewish history led to Poland reckoning with the antisemitism in its history?

DS: Over the course of this period, we had a series of debates [in the public sphere] on Polish Jewish history, starting under the Communist regime, and then culminating in the early 21st century, following the publication of a book by Professor Jan T. Gross, Neighbors. The book [about the Jedwabne massacre of Polish Jews by their non-Jewish neighbors] was really a shock to the Polish public—that was the biggest, most intense, most emotional debate about the past in Poland ever. We have a number of difficult topics from our history to talk about, but the participation of Christian Poles in killing their Jewish neighbors—men, women, and children—proved to be the one that raised the most intense debate. And I saw this debate as a great success, because it showed that there’s a capacity and willingness to talk about the most difficult topic, and that we have developed a language to do so. No other country in Europe has had a debate like this one. So that was something special.

That debate contributed to the establishment of our museum in 2005. Policymakers realized that we have this difficult topic, and it will stay with us, so we have to do something. A Jewish association approached the mayor of Warsaw—Lech Kaczyński, a conservative, the brother of Jarosław Kaczyński, who is running Poland now. So this conservative politician approached the social-democratic national government. And they wanted to talk because there was kind of a widespread political consensus that the Jewish history in Poland is important, and that the public bodies at the city level and the national level should do something about it. Now, I cannot imagine having a politician from Law and Justice [the current ruling party] approach a social democrat to do something together. It’s just unthinkable.

ES: What is the current government's preferred narrative of Polish Jewish history?

DS: They want to have a beautiful, rosy, glorious picture—a great Polish nation, heaven for the Jews, the homeland of toleration. To some extent, it’s true that Poland has been hospitable to Jews. So many Jews migrated to Poland in the late Middle Ages and in the early modern period because Poland offered relatively good conditions compared to other European countries. But the right doesn’t want to see antisemitism, or pogroms, they don’t want to see collaborations with Nazi Germany during German occupation. And this is why I cannot accept [their version of the history]. Because this is only half of the story. It’s the history with all the dark pages thrown away. And our museum has its foundation in solid academic historiography. Politicians everywhere have a tendency to want a nice picture of national history. But trying to intimidate and silence historians is something we cannot accept.

Report
Poll: Democrats Are Divided on BDS
A new Data for Progress survey shows no consensus for or against boycotting Israel, and many voters remain undecided.
Emma Saltzberg
Report
Poll: Democratic Voters Support Cutting Aid to Israel
A new report from Data for Progress shows that there’s room for the primary candidates to move left.
Emma Saltzberg
Sign up for our email newsletter, featuring exclusive original content