Thierry Baudet and the party he leads are laundering racist politics into the mainstream. 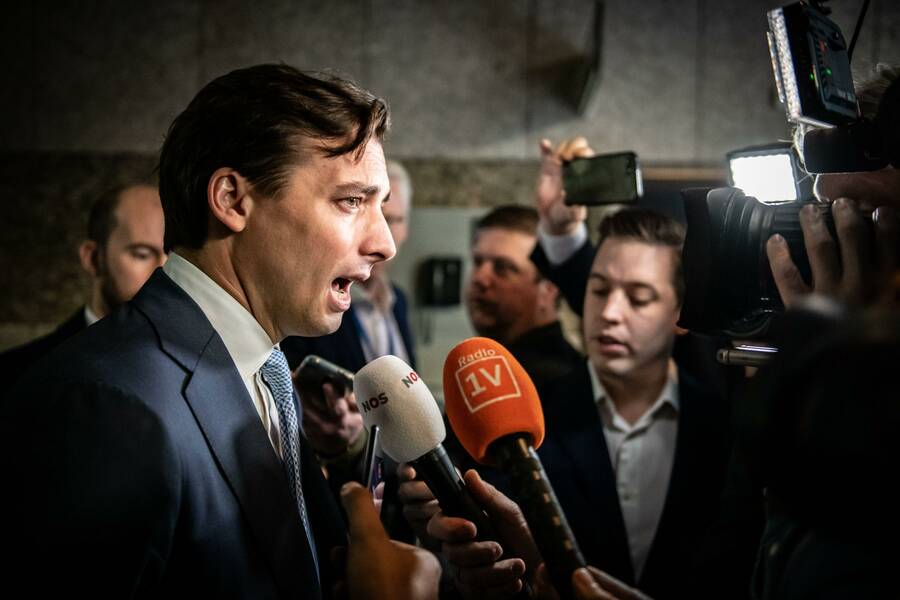 WHEN DONALD TRUMP claimed his administration would be “designating ANTIFA as a Terrorist Organization [sic]” the day before threatening to send the military to quell nationwide protests against racist police violence earlier this summer, he found a notable voice of support in Thierry Baudet, leader of the Dutch far-right party Forum for Democracy (FvD). “We have seen for years that a blind eye is turned to violence from the left,” Baudet said on Dutch television, calling Trump’s announcement regarding Antifa a “[v]ery good decision.” Less than two weeks later, Freek Jansen, leader of FvD’s youth organization, denounced Black Lives Matter as a “racist movement that gives rise to anti-white sentiments and anti-white violence.”

Despite the Netherlands’ liberal reputation, these are not fringe political views. FvD has grown rapidly since its founding as an Amsterdam-based Eurosceptic think tank in 2015, and is now the party with the largest official membership in the Netherlands.

The rise of Baudet and FvD is emblematic of the growing strength of the far right in Western Europe. Like many of their counterparts in other countries, FvD members maintain a genteel facade of competence and erudition. But underneath this veneer lurk the ideas of traditional European fascism: misogyny, racism, and antisemitism, as well as Islamophobia, a hallmark of the contemporary European far right. In the Netherlands, as elsewhere in Western Europe, the far right’s recent success has been enabled by the center, which, in seeking to stymie the far right’s gains by adopting many of its talking points, has brought ideas previously considered extreme into the political mainstream. At the same time, postwar taboos on forming coalitions with far-right parties like FvD are beginning to crumble. These forces are surging not only in the post-socialist countries of Central and Eastern Europe, like Hungary, but also in countries considered the bulwarks of European liberal democracy, such as the Netherlands, France, and Germany.

Baudet is hardly the first far-right Dutch leader to gain significant traction in recent decades. Before Baudet, there was Geert Wilders, leader of the Party of Freedom (PVV), which for the past decade and a half has represented the Islamophobic extreme of Dutch parliamentary politics: In 2016, the PVV ran on a platform of stopping the “Islamization” of the Netherlands that proposed banning the Quran, forbidding women from wearing headscarves, and closing the country’s borders to Muslim immigrants.

But FvD and Baudet—who is 37 and holds a PhD in law—represent something new and different. Whereas PVV draws support mainly from less educated, working- and lower-middle-class white voters, much of FvD’s energetic base consists of young and well-connected professionals and university students, who see themselves as the country’s rightful cultural elite. In contrast to the PVV and Wilders, whose blatant racism they see as too vulgar, déclassé, and politically ineffectual, Baudet and the FvD offer a fresh anti-establishment style, promising cultural rebirth and the restoration of national sovereignty. Though at times, Baudet has been explicit about his reactionary political vision—in a debate on immigration in 2015, he said, “I want Europe to be dominantly white”—he usually avoids such explicitly racist rhetoric. FvD launders the racist politics embodied by the PVV into a more serious platform that is vehemently anti-EU—opposed to what it views as the restrictive and costly bureaucratic meddling of Brussels, including its supposedly lax immigration policy as well as its environmental and human rights protections.

Indeed, FvD has had great success reaching people online: Its recent membership surge was orchestrated through a massive Facebook campaign in late 2019, and its YouTube channel, “FVD Journaal” (FvD News), regularly broadcasts well-produced videos in which Baudet and his colleagues present their takes on current events as “news” directly to viewers. Though here, too, the party projects a respectable, serious exterior, private online spaces have evidently served as a breeding ground for unadulterated racism. In a recent controversy, leaked messages from a private JFVD WhatsApp group revealed fascist and antisemitic rants and jokes. One member wrote, in favor of Nazism, “I’d support literally any ideology that would make the Netherlands 95% white and 0% Muslim.” Another posted an image depicting Anne Frank snorting cocaine, and several glorified white nationalist terrorists. FvD initially claimed it was uninvolved in the WhatsApp group, but these claims were soon proved to be false: A JFVD officer had created the group in 2017, and there were already internal complaints from some of its members.

One need not look far to find racist and antisemitic views within FvD’s inner circle as well. Annabel Nanninga, an FvD representative in the Dutch senate, repeatedly made antisemitic jokes on Twitter in her previous role as a politically-incorrect shock journalist for GeenStijl. In November 2014, she wrote, “Just now buying some Mein Kampfs. You can’t start shopping for Christmas presents early enough. Si-lent night, SiegHeil-ey night.” Baudet himself often invokes familiar far-right tropes: the press as “fake news”; academia as a morass of leftist professors indoctrinating students with “cultural Marxism” (often an antisemitic dog whistle); the judiciary as biased and subverting the democratic will of the people; “globalists” like George Soros threatening national sovereignty; and immigration as a form of “homeopathic dilution” of the native (white) European population.

Baudet has continued to make his sympathies clear, too, in his relationships with racist figures on the transnational far right. He has met with Jared Taylor, the “race realist” and editor of the white supremacist magazine American Renaissance; the two shared a five-hour private dinner in 2017. But perhaps Baudet’s closest ideological ties lie with the French far right. He has a deep affinity for Jean-Marie Le Pen, the founder of France’s National Front party (now led by his daughter, Marine) and a Holocaust denier. Baudet has personally visited Le Pen père repeatedly in Paris since 2009.

Baudet’s debt to Le Pen and his fascist ideology is evident in his rhetoric. When lamenting the “homeopathic dilution” of Western European whiteness by immigrants from the Global South, he frequently refers to “ons boreaal Europa”—“our boreal Europe.” It is this very phrase that helped precipitate Le Pen’s ouster from the National Front, when he gave an interview to the French magazine Rivarol in 2015; the interview was then translated by the neo-Nazi website Counter-Currents under the title “We Must Save Boreal Europe and the White World.” The term “boreal” (“of the north”) has a long lineage in Nazi racial mythology, a reflection of the belief that the Aryans were a powerful, superior Nordic race. Baudet has unconvincingly claimed to be ignorant of the term’s associations or to be using it in an unrelated, philosophical sense.

Like other far-right leaders, Baudet uses the alibi of his stridently pro-Israel, pro-Netanyahu platform as a “philosemitic” defense against charges of antisemitism and fascism. In May 2019, Baudet appeared wearing a kippah, speaking at a public event about the rise of antisemitism in the Netherlands. Just one week prior, Baudet had circulated a video from Fenixx, an openly antisemitic website. The video, originally made by the Austrian extreme-right Identitarian Movement, claims that politicians have allowed immigrants to sweep across to Europe to rape and murder innocent women. Baudet claimed to have no knowledge of the video’s provenance. Likewise, when Annabel Nanninga came under fire for her antisemitic jokes, her response was to stress her support for Dutch Jews and for Israel. This strategy of combining overt partnership with Israel with domestic antisemitism, which has been pursued most egregiously by Hungarian Prime Minister Viktor Orbán, is now being replicated elsewhere in Europe.

As has been the case in other European countries, the Dutch center right, faced with FvD’s brand of xenophobic populism, has opted to find common cause with it rather than forcefully oppose it. This has helped bring FvD’s ideas into the political mainstream. Prime Minister Mark Rutte, who leads the center-right People’s Party for Freedom and Democracy (VVD) and is widely seen as a “sober” antidote to right-wing populism, has stated that, in principle, he sees no reason to rule out a future governing coalition that includes FvD. Recent political developments already presage such a possibility: The center-right Christian Democratic Appeal (CDA), which is a member of the European People’s Party, recently formed a coalition government that includes FvD in the province of North Brabant.

To maintain his party’s political power, Rutte has also adopted elements of the far right’s politics, using harsh and dehumanizing rhetoric toward immigrants and Dutch people of color. In 2015, Rutte’s cabinet approved a ban on women wearing the burqa or niqab in public transportation, schools, hospitals, and other public buildings (the result of a previous agreement with Wilders’s PVV in 2012). In the run-up to the country’s March 2017 elections, when the VVD was trailing Wilders’s PVV in the polls, Rutte published an open letter telling immigrants to adapt to “Dutch values” or leave. A recent VVD video about asylum seekers who break the law declared that the Netherlands “is not a sanctuary for scum.” Rutte enjoys a reputation as “a world-class pragmatist”—a model Western European moderate—but as the far right gathers strength, he has shown a clear willingness to engage in racist pandering to shore up his voters’ support.

Baudet’s own political future remains uncertain. He is unlikely to consolidate power in a country run by coalition governments, in which over a dozen political parties compete, without significant compromise. Yet even if Baudet and FvD prove unable to move from the parliamentary margins to the mainstream, they will still be able to exert a significant pernicious influence on Dutch politics from the opposition, as well on European politics more broadly.

Earlier this year, Dutch political scientist Cas Mudde highlighted one sign of the continued “mainstreaming of the far right”: a 2019 proposal by the president of the European Commission—Ursula von der Leyen, a member of the center-right German Christian Democrat (CDU) party—to create a commissioner job focused on immigration policy with the title of “vice-president for protecting our European way of life.” The fact that racist dog whistles have been absorbed as straightforward talking points by politicians of mainstream parties like the German CDU and the Dutch VVD demonstrates that Baudet and other far-right leaders are succeeding at spreading their ideas—and that Europe’s centrist parties are not a bulwark against this process, but rather its enablers.

Nicolaas P. Barr teaches in the Comparative History of Ideas Department and Jewish Studies at the University of Washington.