What explains the long history of Jewish admiration for this particular founding father? 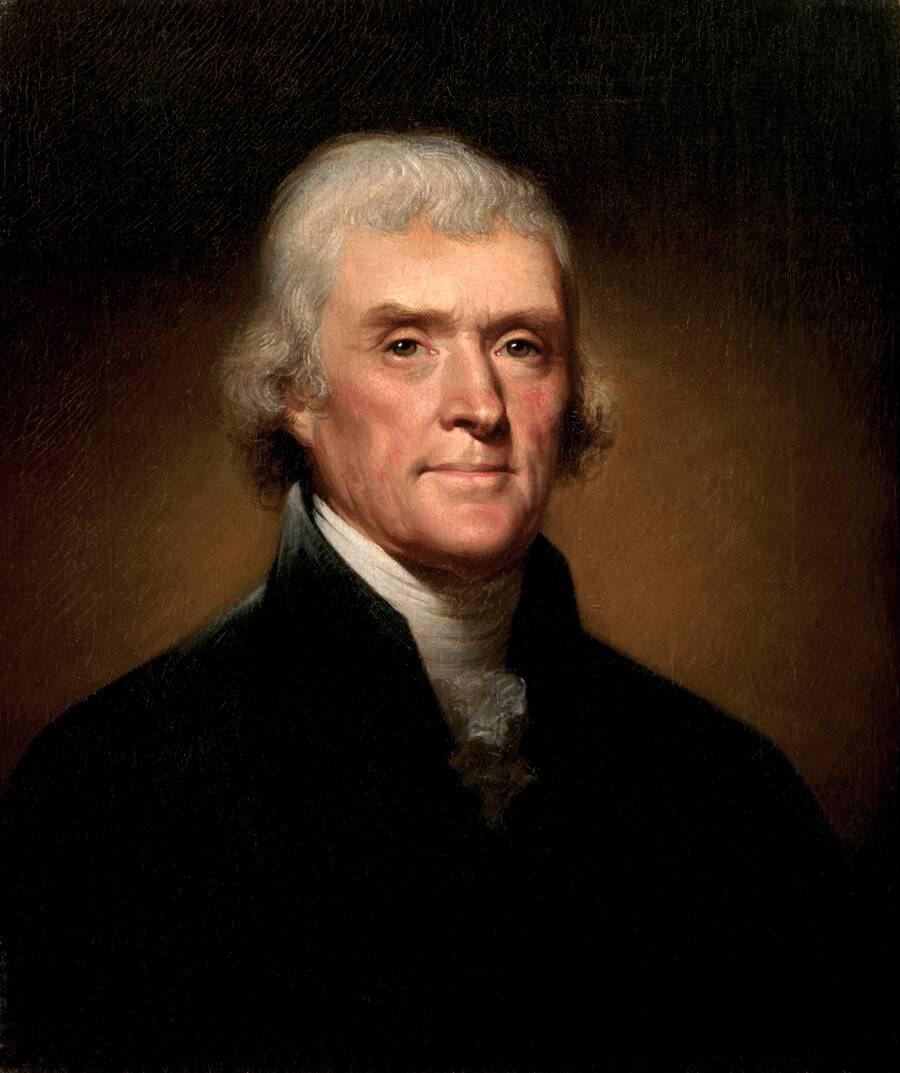 MORRIS SCHAPPES, a principle founder of Jewish Currents, and editor from 1956 until 2000, was a non-sectarian Marxist historian of America history. Born in Eastern Europe, he, like so many of his generation of Jewish immigrants, came to strongly identify as an American. Like many of his cohort, he sought radical inspiration from past American leaders, and many of his writings reflect this search. One of his first publications, in 1944, was as editor of a collection of the writings of Emma Lazarus, the Jewish poet whose sonnet welcoming immigrants is inscribed on the Statue of Liberty. By 1950, he published a Documentary History of Jews in the United States 1654-1874. Eight years later, his masterwork, The Jews in the United States: A Pictorial History, appeared in print.

Schappes was far from the only radical interested in American history. Another early pillar of this magazine, the historian Yuri Suhl, wrote a biography of Ernestine Rose, an American Jewish abolitionist and women’s rights crusader, first published in 1959. Others associated with the old Jewish left, most notably historian Philip Foner, also wrote in this field. During World War II, Foner edited and introduced a selection of Thomas Jefferson’s writings. In this spirit, novelist Howard Fast wrote many historical novels about the American Revolution including fictionalized accounts of the lives of Haym Solomon, who raised money for the revolutionary cause, and Tom Paine, the firebrand pamphleteer. Schappes, Suhl, Foner and Howard Fast were all immigrants or children of immigrants from Eastern Europe who became Communists in their youth in the United States.

It might surprise some leftists today that these Marxist intellectuals were so interested in early American republican history, and specifically the works of Thomas Jefferson. I believe what attracted these Jewish radicals to the study of American history was the conviction that, regardless of the many challenges, America held promise for Jews from its very beginning. In part, this belief was rooted in America’s founding as a secular republic, for which Thomas Jefferson is given enormous credit. Indeed, admiration for this founding father went so far as to inspire the Communist Party to name the educational institute it founded in 1943 the “Jefferson School of Social Science.”

This Jewish veneration of the American Republic, and specifically for Jefferson, is far older than the 20th century, and apparent in the life stories of several of the most prominent early American Jews. One can imagine Schappes and his cohort seeing some reflection of their own experiences as radical secular Americans beset by reactionary and antisemitic political forces, buoyed by alliances with progressives of all races and religions. Should Jewish leftists continue to venerate the Founding Fathers as Schappes did?

BRIEFLY REVISITING the lives of some early Jews who venerated the architects of the republic may hold answers. Benjamin Nones (pronounced Nun-yes), a Sephardic Jew, was born in Bordeaux, France in 1757 and immigrated to the British colony of Pennsylvania in 1772. Five years later, while the American Revolution was raging, he joined the Continental Army. He served as a non-commissioned officer, fought with distinction in many major battles and received a citation for bravery.

In 1798 a fierce political struggle broke out between the Federalists, then in control of the national government, and the Democratic-Republicans. Congress passed the Alien and Sedition Acts. The former prevented French and Irish immigrants, all suspected of radicalism, from becoming citizens and gave the President unlimited power to deport them. The latter outlawed speech critical of the government. At the same time, the Federalists attempted to smear the Democratic-Republicans as Jacobins, atheists and agents of the French government.

The presidential election campaign of 1800 was conducted in at atmosphere of Federalist “red-baiting.” Since most Jews were sympathetic to the Democratic-Republicans, it should come as no surprise that the Federalists also resorted to Jew-baiting. Nones was an active member of the Democratic-Republican Party in Philadelphia. On July 30, 1800, a party meeting took place to organize for the coming election. A Federalist newspaper, The Gazette of the United States, sent a reporter to cover the event. On August 5, 1800, an article appeared in The Gazette describing those present as “Jacobins,” who comprised the “very filth and refuse of society.” Nones was disparaged as a Jew.

At first Nones submitted a response to The Gazette, which refused to print it, even as a paid advertisement. Not to be deterred, Nones made a handbill out of his response and distributed it on the streets of Philadelphia. He also turned to the Philadelphia Aurora, a Democratic-Republican newspaper edited by William Duane, himself under indictment for violating the Sedition Act. The Aurora printed Nones’ response on August 13, 1800.

Nones’ letter boldly avows Nones’ pride in his Jewish identity, his republican principles (in the sense of opposing monarchy and supporting representative government) and the inseparable connection between the two:

I am a Jew, and if for no other reason . . . I am a republican. Among the pious priesthood of church establishments, we are compassionately ranked with Turks, Infidels and Heretics. In the monarchies of Europe, we are hunted from society, stigmatized as unworthy of common civility . . . Among the nations of Europe, we are inhabitants everywhere, but Citizens nowhere, except in republics . . . In republics we have rights, in monarchies we live but to experience wrongs. And why? Because we and our forefathers have not sacrificed our principles to our interest, or earned an exemption from pain and poverty by the dereliction of our religious duties, no wonder we are the objects of derision to those who have not principles, moral or religious, to guide their conduct.

Thomas Jefferson and his Democratic-Republican Party went on to win the election and repealed the Alien and Sedition Acts. After Jefferson died in 1827, his estate, Monticello, fell into disrepair. In 1833, Uriah P. Levy, a Jewish naval officer, bought it and restored it. According to the terms of his will, it was to be left to the US government upon his death. But when Levy died in 1862, the Civil War was underway and the Confederacy seized the property.

After the war, the Levy estate recovered Monticello. In 1879, his nephew, named Jefferson Monroe Levy, took control and sold it to the Thomas Jefferson Foundation in 1923. After additional restoration, it was opened as a museum in 1929. Undeniably, America owes the preservation of this historical landmark to the Levy family.

Levy is also known for his successful campaign to abolish flogging in the United States Navy. Levy was pugnacious by nature and was often brought up on disciplinary charges, including six courts-martial. Antisemitism likely played a role, but he also earned the support and respect of many of his military comrades who testified in his defense. Toward the end of his life, he was promoted to the rank of Commodore.

WHAT WAS the basis for this admiration of Jefferson and the Founding Fathers, shared with Benjamin Nones, Uriah P. Levy and many other American Jews? Jefferson was a firm believer in religious liberty. With respect to Jews in particular, Jefferson wrote:

[I have] ever felt regret at seeing a sect, the parent and bases of all those of Christendom, singled out by all of them for persecution and oppression which proved they have profited nothing from the benevolent doctrines of Him whom they profess to make the model of their principle and practice.

I consider Thomas Jefferson to be one of the greatest men in history, the author of the Declaration of Independence and an absolute democrat. He serves as an inspiration to millions of Americans. He did much to mould our Republic in a form in which a man’s religion does not make him ineligible for political or governmental life.

In 1939, Earl Robinson wrote Ballad for Americans, a patriotic cantata sung by black singer and activist Paul Robeson, with lyrics that quoted the Declaration of Independence and extolling Revolutionary War era heroes Washington, Jefferson and Tom Paine, as well as the African American Crispus Attucks, shot dead by British troops in the Boston Massacre, and Revolutionary financier Haym Solomon. Although neither Robinson or Robeson were Jewish, the song was enormously popular among the Jews on the left during World War II and after. As a red diaper baby, I was familiar with the song growing up in the 1950s and 60s. Ballad for Americans still gives me goosebumps.

In the age of Trump, its invocation of an America that belongs to all of its inhabitants regardless of race, nationality or religion still resonates. Yes, Jefferson was a slaveholder and supported the institution his entire life. He also believed in a small government based on an agrarian economy, but his invocation that “all men are created equal” and his firm advocacy for the separation of religion and state gave hope to Schappes, Suhl and other radical secular Jews that America would fulfill its promise.

Today radical Jews and other progressives are not so forgiving. Indeed, Schappes et al may have gone a bit too far, especially during the Popular Front and World War II periods when communists compromised their radicalism in support of the New Deal and the wartime alliance with the Soviet Union. But there is a danger in judging Jefferson by contemporary standards.  Insofar as there was a “left” in his day, he belonged to it. In fact the very term was invented during the French Revolution, a cause that Jefferson and his followers enthusiastically embraced.

When farmers took up arms in Massachusetts in 1786 in an uprising known as Shays Rebellion, determined to end imprisonment for debt and foreclosures on their property, America’s political and economic elites were horrified and cheered when the Massachusetts militia suppressed it. Jefferson proved the exception. He commented, “I hold that a little rebellion now and then is a good thing . . . It is a medicine necessary for the sound health of government . . . God forbid that we should be twenty years without such a rebellion . . . The tree of liberty must be refreshed from time to time with the blood of patriots and tyrants.  It is its natural manure.”

Bennett Muraskin, a contributing writer for Jewish Currents, is author of The Association of Jewish Libraries Guide to Yiddish Short Stories, Let Justice Well Up Like Water: Progressive Jews from Hillel to Helen Suzman,and Humanist Readings in Jewish Folklore, among other books.