The lion of Israel’s peace movement has passed away at age 94. 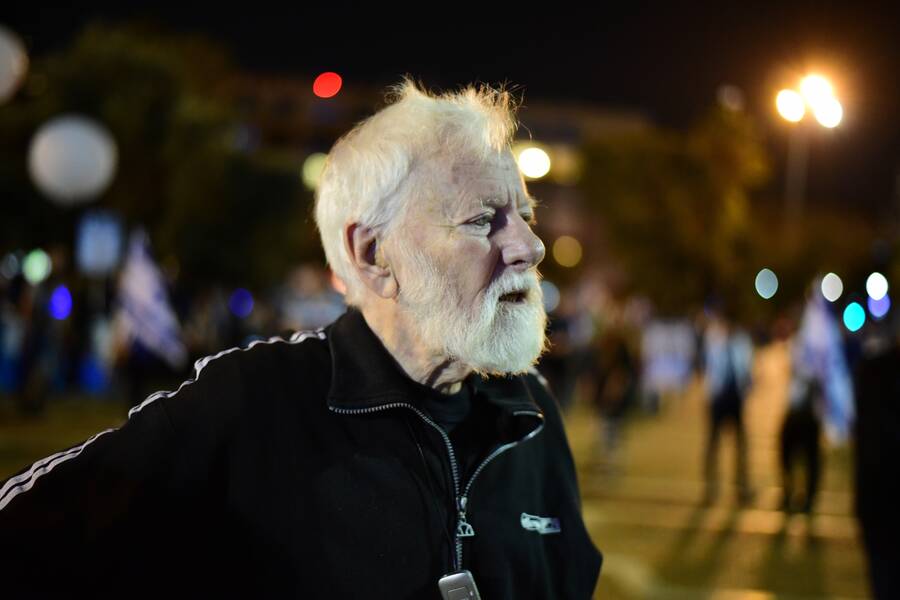 ISRAEL’S MOST SENIOR and most courageous activist, Uri Avnery, died on Monday at age 94, ending a long life of progressive activism, journalism, troublemaking and peace-seeking.

Born into a prosperous family in Germany in 1923 as Helmut Ostermann, Avnery was educated in a Catholic school where he was the only Jewish student. His family immigrated to Palestine in 1933 after Hitler’s rise to power. At age 14, he was forced to quit school to help support his struggling family, who lost everything when they fled.

At only 15 years old he joined the Irgun, an underground military organization that advocated the establishment of a Jewish state through militant action against both the British and the Arabs. One of his assignments was to infiltrate the Haganah, the mainstream Zionist militia. In 1941, he quit the Irgun over disagreements with its anti-Arab ideology and tactics, especially the planting of bombs in Arab markets.

In 1946, Avnery founded the Eretz Yisrael Hatz’ira (Young Palestine) movement and became the editor of its publication, Bama’avak (In the Struggle). It called for the creation of a Hebrew nation that would join with its Arab neighbors to free themselves from British colonialism and create a regional federation. In Avnery’s view, the word “Hebrew” signified that Jews in Palestine were a new nationality distinct from diaspora Jewry. Rejecting Zionist claims to represent world Jewry, Avnery and others called themselves “Semitic” because they considered themselves the natural allies of their fellow “Semites,” the Palestinian Arabs.

Following the passage of the UN Partition Resolution in late November 1947, Arab militias began to attack Jewish targets. Although Avnery opposed the Partition Resolution on the grounds that it flouted principles of Hebrew-Arab solidarity, he volunteered for the Haganah to defend the fledgling state. He fought to break the Arab siege of Jerusalem and to resist the Egyptian army’s invasion of the Negev region, and in December 1948 he was severely wounded in battle.

In 1949, Avnery published In the Field of the Philistines, the first book about the War of Independence from the perspective of a Jewish combat soldier. Focusing on the heroic aspects of the war, it became a best-seller. But after overhearing youngsters praising his book and expressing regret that they were too young to have fought in the war, Avnery decided to write a novel, The Other Side of the Coin, to reveal the war’s ugly dimensions, particularly the mistreatment and expulsion of the Palestinians.

Based on notes he made while recovering from his wounds in a military hospital, The Other Side of the Coin attacked the Zionist myth of “purity of arms.” He described the execution of Arab prisoners, both military and civilian, the expulsion of Arabs from villages, the confiscation and destruction of their property, and the shooting of Arab villagers who tried to return home. Akin to All Quiet on the Western Front, he depicted the innate cruelty and futility of war, the stupidity of officers, and the vacuous nationalist rhetoric of politicians safely behind the lines. Although the term did not yet exist, he accused both sides of practicing ethnic cleansing. He argued that “killing for the motherland” invariably removes moral restraints and leads to atrocities.

Upon publication in 1950, the book was immediately condemned by the Israeli press as mendacious. Overnight, Avnery went from national hero to persona non grata. Although the first print run of The Other Side sold out, the government would not allocate the paper for a second edition.

IN 1950, Avnery became the publisher and editor of a weekly magazine Ha-olam Hazeh (This World). Published until 1990, it consistently stood for the separation of state and religion, equality for Israel’s Mizrahi minority, the lifting of military rule over Israel’s Arab minority, social justice and, most of all, the creation of an independent Palestinian state alongside Israel. In his proudest moment as a young journalist, in 1954, Avnery exposed the Lavon Affair in which Israeli agents blew up Western targets in an attempt to frame Gamal Abdel Nasser’s Egypt. He also exposed Israeli massacres of Arabs, including the notorious incident in 1956 in Kafr Qasim, where 48 Arab peasants returning to their village were killed by Israeli border police.

Under the banner “Without Fear and Without Bias,” Ha-olam Hazeh emerged as the voice of the Israeli counter-culture. It featured political exposés and avant-garde literature, but became known for its sensationalism, gossip columns, and racy photos of women. Its circulation peaked at 25,000, though its influence far exceeded its readership.

Avnery created a political party of the same name and in 1965 was elected to the Knesset, serving until 1974 and once again from 1979 to 1981 as a member of the Left Camp, when he gave up his seat to a Palestinian colleague. He gave 1,000 speeches and introduced 300 bills—without seeing one of them pass. He was the first Israeli parliamentarian to introduce a resolution favoring the establishment of a Palestinian state, which received a total of two votes. During the Six Day War in 1967, when once again the Israeli military destroyed Arab villages and expelled their inhabitants, Uri Avnery used his influence as a Knesset member to save one village from destruction.

In 1974, Avnery violated Israeli law by making secret contact with PLO representatives in London. In 1982, during the Israeli army’s siege of Beirut, he became one of the first Israelis to meet Yasser Arafat, prompting four government ministers to denounce him as a traitor.

In 1993, along with his wife Rachel and others, he created Gush Shalom (Peace Bloc) an organization dedicated to the two-state solution and human rights for the Palestinians in the occupied territories. He initially supported the Oslo Accords despite many misgivings and considered the assassination of Prime Minister Rabin in 1995 a devastating blow to the peace process. Throughout his life Avnery maintained a high opinion of Yasir Arafat, whose manifest flaws as a leader he chose to ignore.

Avnery did not think himself an anti-Zionist, but rather a “post-Zionist.” In a 2015 column he wrote, “With the creation of the State of Israel, Zionism has fulfilled its role. Israeli patriotism must replace it. Like scaffolding that is dismantled once the new building is finished, Zionism has outlived its usefulness and should be discarded.” He considered himself an Israeli patriot first and a Jew second. Israel, he insisted, should not be a Jewish state, but a state belonging to its citizens regardless of nationality or religion, seeking a cooperative relationship with its Arab neighbors.

While later in his life Avnery advocated for a two-state solution based on the 1967 borders, he was an inveterate optimist regarding a shared future for Israelis and Palestinians. As he wrote in 2007:

Even after 60 years, in which they have suffered catastrophes which few other peoples have experienced, the Palestinian people clings to its country with unparalleled fortitude. True, the dream of living in one state is dead and will not come to life again. But I have no doubt after the Palestinian state comes into being, the two states will find ways to live together in close partnership. The walls will be thrown down, the fences will be dismantled, the border will be opened and the reality of the common country will overcome all obstacles.

Avnery’s last commentary, dated less than three weeks before his death, was devoted to denouncing the new Israeli law, championed by Prime Minister Netanyahu and his right-wing government, that declared Israel as the nation state of the Jewish people.

Avnery, an atheist, left instructions for his body to be cremated and his ashes to be dispersed into the ocean. He enjoyed eating fish and he wanted to return the favor.

Bennett Muraskin, a contributing writer for Jewish Currents, is author of The Association of Jewish Libraries Guide to Yiddish Short Stories, Let Justice Well Up Like Water: Progressive Jews from Hillel to Helen Suzman,and Humanist Readings in Jewish Folklore, among other books.

Essay
The Long Jewish Relationship with Thomas Jefferson
What explains the long history of Jewish admiration for this particular founding father?
Bennett Muraskin
Blog-Shmog
Rethinking the Exodus Story
Bennett Muraskin
Sign up for our email newsletter, featuring exclusive original content
Short on time?
Sign up for our weekly Monday roundup of everything you missed in Jewish Currents last week.