States Are Moving to Class Criticism of Israel as Antisemitism

Bills making their way through the Arizona and Iowa legislatures would codify the controversial IHRA definition of antisemitism into hate crime and civil rights law. 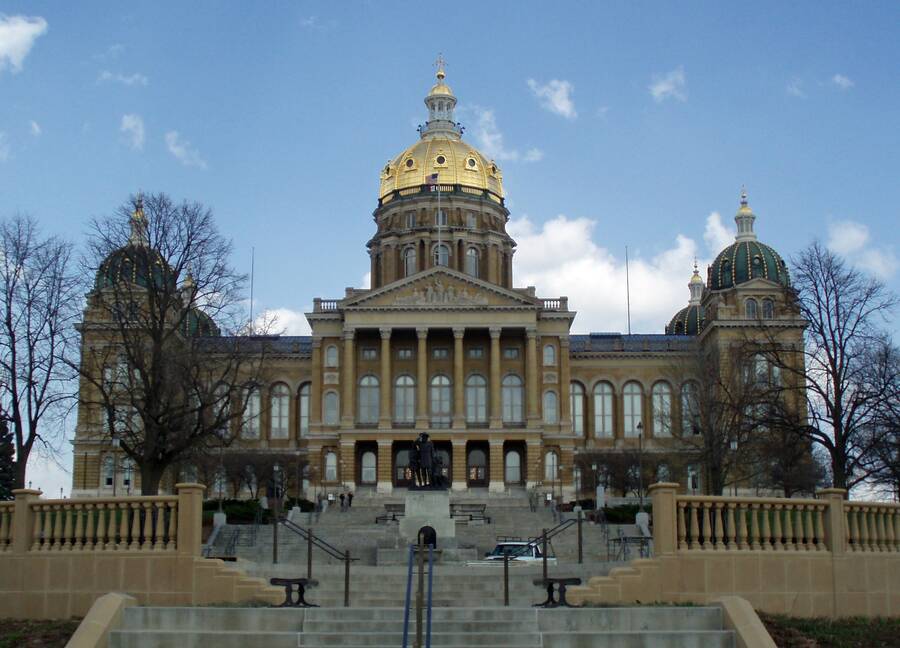 A NEW WEAPON has been unveiled in the battle to quash activism and criticism targeting Israel. Pending bipartisan bills, introduced in Arizona’s House and Senate, as well as in Iowa’s House, seek to codify the controversial International Holocaust Remembrance Alliance (IHRA) definition of antisemitism into the states’ hate crimes law and civil rights laws, respectively. Parts of that definition conflate antisemitism with both criticism of Israel and anti-Zionism; as a result, the implications of this new legislation for free speech are alarming.

The IHRA definition of antisemitism was thrust into the spotlight on December 11th, 2019, when Donald Trump issued his controversial executive order on antisemitism—an order focused narrowly on policing academia in the United States. In that respect, Trump's executive order is like other initiatives that have previously sought to codify the IHRA definition into law and policy—including a long-pending bill in Congress called the “Anti-Semitism Awareness Act” (which the executive order rendered moot) and legislation, passed and pending, in numerous states.

Kenneth Stern, the lead author of the IHRA definition, has long made clear that the language was never intended to be used this way, and that doing so raises serious free speech concerns. Such concerns have proved well-founded, with Trump’s executive order opening the door for a flood of complaints tied to alleged antisemitic incidents. All of the alleged offenses relate to violations of the IHRA’s Israel-related provisions, which fall outside the scope of what has traditionally been defined as antisemitism—that is, hostility toward Jews simply because they are Jewish. Universities that have already come under attack in the two months since the issuance of the executive order include Georgetown, Columbia (two separate claims), UCLA, Duke and the University of North Carolina, and Georgia Tech, as well as Middle East Studies National Resource Centers (NRCs) nationwide.

What is happening in Arizona and Iowa is different, and represents an even more alarming shift in tactics. Rather than targeting free speech on campuses, the Arizona bills seek to inscribe the IHRA formula into the DNA of the state’s laws dealing with hate crimes. By lumping criticism of Israel into the same shameful category as “prejudice based on race, color, religion, national origin, sexual orientation, gender or disability” in a statute related to crime statistics—a list that is used in Arizona’s sentencing statute as the basis for determining which groups, in effect, enjoy protected status—the bills would establish as a matter of law that criticism of Israel must be considered an “aggravating factor” when handing down sentences for criminal convictions. This means that past criticism of Israel could open the door for harsher, “aggravated sentences” for protesters  charged with a crime.

Criminal charges are becoming a go-to weapon of state and local authorities across the nation when it comes to suppressing political protests and other forms of constitutionally protected free speech. One of the most prominent recent examples of this criminalization of protest was the mass indictment of 214 Americans for protesting Trump’s inauguration in 2017—with many of them subjected to a legal ordeal lasting more than a year. In 2019, Arizona had several notable cases of its own. University of Arizona students were hit with criminal charges for protesting a Border Patrol event on campus. Authorities slapped protesters with felony riot charges for demonstrating outside a local prison. And Phoenix police arrested people participating in an immigration rally, charging them with misdemeanors and felonies. In this context, it is not a stretch to imagine criminal charges against protesters in Arizona, on- or off-campus, for opposing Israeli military actions in Gaza or for supporting Palestinians’ human rights. The bill currently moving through Arizona’s legislature would ensure that such charges—and potential sentences—would be more severe, with the protesters’ views on Israel enabling courts to classify their alleged offenses, in effect, as hate crimes.

In Iowa, the new tactic takes a different form. The pending legislation would amend the state’s civil rights laws to require that authorities use the IHRA definition in determining whether an alleged violation of state rules or policies regarding “discriminatory acts . . . was motivated by discriminatory anti-Semitic intent.” The objective behind the legislation is hinted at heavily in the bill’s explanatory language, which describes campus antisemitism as “systemic, broad, and deep,” and says that “State officials and institutions, including educational institutions, have a responsibility to protect citizens from acts of hate and bigotry motivated by discriminatory animus, including anti-Semitism, and must be given the tools to do so.”

The situation in European countries that have adopted the IHRA as a national policy provide a glimpse into what these bills could mean on the ground: in the United Kingdom, a charity event for Palestinian children is canceled, and pro-Palestinian campus activism barred; in Germany, a public lecture is blocked, the director of a Jewish museum is hounded into resigning, and the bank account of a Jewish organization that supports boycott, divestment, and sanctions (BDS) against Israel is closed; and in France, the mere act of calling for boycott of Israel is criminalized.

Another concern is that the pending legislation portends more of the same across other states. This prediction is shaped by the experience of the past five years, during which legislation to quash boycotts of Israel (and, in most cases, its settlements in the West Bank) has spread with remarkable efficiency from one state legislature to another. The success of this strategy speaks for itself: as of this writing, such laws have been enacted or are pending across the US.

This prediction is informed, too, by the example of two previous efforts to promote the IHRA definition in state legislatures. Specifically, in 2018, Rep. Alan Clemmons, a South Carolina legislator who has long been a standard bearer for the far-right agenda on Israel and a leader in the conservative, “model-bill factory” known as ALEC, introduced legislation to codify the IHRA definition into law as part of a provision ostensibly targeting antisemitism in state colleges. His bill passed in South Carolina, and in 2019, Florida followed suit.

Clemmons’s effort enjoyed the backing of a lobbying group funded by the right-wing Jewish casino magnate Sheldon Adelson, the Israel Allies Foundation (IAF), and in particular the help of IAF’s US Director Joe Sabag. Sabag has publicly identified himself as the “the primary legal expert who helped develop” the legislation passed in both South Carolina and Florida. An email—which was sent by the state representative behind the Florida law, Randy Fine, to at least five legislators from other states—notes that Sabag “was instrumental in providing outside support as I pushed the bill and I would recommend anyone considering such an effort to talk to him.” Sabag’s reply-all to that email highlights the goal of spreading such bills across the country: “My legal team has now taken Randy’s bill and refined it into a model that can be brought elsewhere. I urge you to please contact me or Rep. Alan Clemmons and take advantage of our policy support if you are considering filing a bill.” Notably, in that same message, Fine makes clear that the real point of his legislation is to target pro-Palestinian activism: “Students for Justice in Palestine is now treated the same way as the Ku Klux Klan – as they should be.”

Sabag and Adelson are not the only ones backing these bills. There exists today a veritable cottage industry of organizations dedicated to promoting the IHRA definition as a legally-mandated litmus test, designed to delegitimize if not criminalize criticism and activism on Israel, and especially boycotts. Most prominent among them is Israel’s Ministry of Strategic Affairs, which in September 2019 published a report documenting how “leading BDS activists or organizations disseminated content that meet [sic] the internationally accepted definition of antisemitism” under the IHRA definition. Another major player in this effort is the right-wing powerhouse NGO Monitor, which has urged governments and the United Nations to adopt the IHRA definition as a step toward cutting off funding for and cooperation with all or most Palestinian and pro-Palestinian groups.

Within the US, promoters of the IHRA definition include the Anti-Defamation League, which has dismissed concerns that the definition could be used to target free speech critical of Israel. Another player is the Lawfare Project, which in November 2019 argued that upholding the Court of Justice of the European Union’s decision to require labeling of settlement products would “fly in the face” of the IHRA definition of antisemitism. Perhaps most prominently today, there is the Zachor Legal Institute, which has argued for years for using US anti-boycott provisions, antitrust laws, racketeering laws, and anti-terrorism statutes against BDS.

In January 2020, Zachor produced a report entitled “The New Anti-Semites.” Published by StopAntisemitism.Org—an organization born during the Trump era that campaigns against members of Congress and others who criticize Israel—the 120-page report uses the IHRA definition as the foundation of its analysis and of its condemnation of pro-Palestinian activists as antisemites. The report recommends that in order to better target the “new anti-Semites”—by which it means critics of Israel and its policies—the IHRA definition should be “reinforced” by means of “effective laws and policies, and the consistent enforcement of these laws and policies, in order to ensure the limitation of this destructive phenomenon.” The bills now moving through the state legislatures in Arizona and Iowa are examples of laws that, under the pretext of fighting antisemitism, are designed to do precisely that.

Lara Friedman is the president of the Foundation for Middle East Peace (FMEP) and a contributing writer at Jewish Currents.