Boots Riley Is Telling Liberal America Not to Be Fooled

Sorry to Bother You is a powerful rejoinder to the capitalist monoculture of our time. 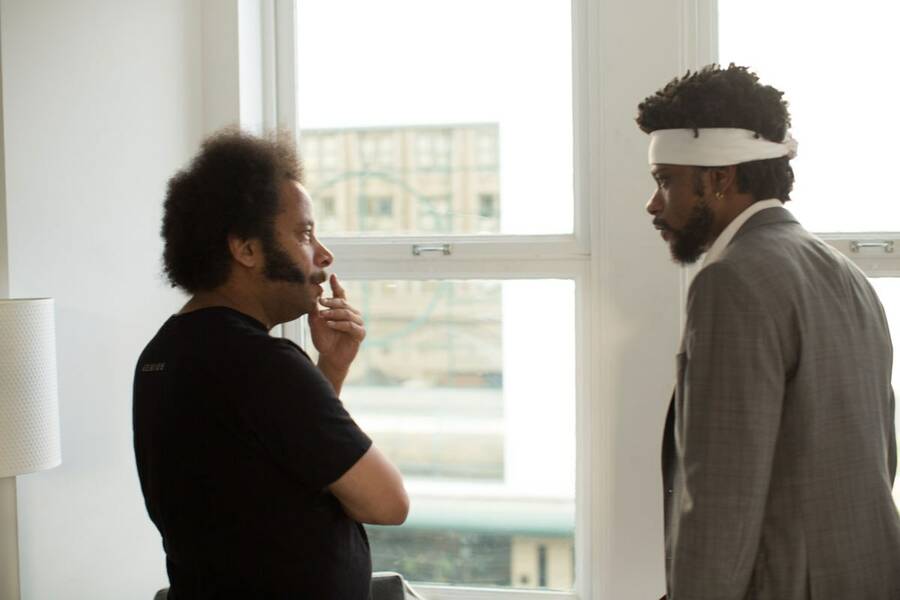 BACK IN 2002, rapper and artist Boots Riley appeared on Bill Maher’s Politically Incorrect and warned the panel that America was about to ransack the Middle East, turn Afghanistan into a banana republic, and enter a new era of Islamophobia, government surveillance and police brutality. These goofy predictions earned him scorn and ridicule from fellow guests Local Conservative Activist #1653 and soap opera star Eric Braeden.

But the big record scratch came when Riley informed the crowd that he was a real-life, in-the-flesh communist. The panel of Maher’s supposedly cutting-edge show could not process this idea, and Riley spent the second-half of the program facing a wall of noise: A communist, really? Don’t you read history? What did capitalism ever do to you? Hasn’t it solved most of the problems? And by the way, can we ban the veil already?

Fifteen years later, Boots Riley seems to have won the day, not only analytically—all his forecasts were, of course, correct—but artistically. His first feature film, Sorry To Bother You, is one of the freshest, funniest and most unsettling social satires of the past decade. (Maher, meanwhile, is still microwaving old one-liners about Monica Lewinski for an audience of drowsy racist Boomers as they fall asleep each Friday.)

Riley is still a card-carrying Red and his debut is unabashedly anti-capitalist, a story of bosses versus workers. Both the jokes and the scares arise from alienation, the dehumanization of work, the absurd logic of profit-seeking, and creepy Silicon Valley utopianism. A bit of Do The Right Thing, some Putney Swope, a pinch of Brazil.

The plot follows Cassius Green (Lakeith Stanfield), and his ascent from unemployment to “power-caller” at a telemarketing agency owned by an even larger and more ominous tech company, “WorryFree.” As he’s promoted into the corporate elite, he struggles to remain loyal to his unionizing co-workers and his girlfriend Detroit (Tessa Thompson), an activist and artist whose on-screen ‘KILL KILL KILL’ earrings have already sold out on the movie’s website. Eventually, Cassius’s journey to the heart of WorryFree reveals a monstrous secret that fuels the growth of the company.

The film plays with a surreal and stylized approach, but its politics are just as vivid and bombastic, especially compared to the half-baked, braindead liberalism peddled by most of Hollywood, half of which thinks full communism is a tax credit for using sustainable toilet paper and the other half of which actively worships Ayn Rand. This movie, by contrast, is an uncompromising bit of revolutionary agitprop the moral of which is: kill the bosses.

The first thing one notices is that, in a movie set in Oakland and starring a largely black cast, Riley takes on race and class at the same time. However fashionable it’s become to pick one or the other as the “real” source of oppression, Riley presents them as hopelessly intertwined. In order to keep his job, which he desperately needs, Cassius must utilize his “white voice.” An older, wiser co-worker (Danny Glover) explains the importance of code-switching to make a sale, and so Cassius adopts a nasal caucasian alter ego voiced by David Cross. As he advances up the corporate ladder the white voice becomes mandatory, and, as Detroit points out, Cassius begins to use it in his personal life without even realizing it. Even with this somewhat predictable gag, Riley’s script makes a deeper critique than you might expect. The white voice isn’t just a voice that sounds white, Glover’s character explains, “it’s what [whites] wish they sounded like.” Successful, put-together, content, superior to everyone else—the false consciousness of the shrinking white “middle class.”

Riley takes every opportunity to hit home another point: capitalism’s Borg-like ability to absorb and assimilate almost anything, especially its enemies and dissenters. When Cassius sells out and crosses his friends’ picket line, a young protester nails him in the head with a Coke can; the video of her big moment goes viral. We learn later on that the protester has signed an endorsement deal with Coca-Cola, shooting a slick commercial where she nails a Cassius lookalike in slow motion before passionately making out with him.

If that reminds you of last year’s grotesque Pepsi commercial where Black Lives Matter protesters and cops solve their differences over the brand-name soda, that’s either because Riley wanted it to, or his stuff is so on-point that he wrote it before the ad even happened. But despite all the justified outrage over that commercial from activists and writers, most viewers out there actually liked the Pepsi ad, particularly nonwhites. Riley is telling us not to be fooled.

Capital thrives off the modern obsession with individualistic “empowerment,” and it has no problem commodifying counterculture and resistance. Once Cassius goes scab, Detroit accuses him of abandoning his friends and comrades. His answer: “I’m good at something! I’m making a difference!”

So is resistance futile? This is where the film’s politics truly set it apart. Once Cassius sees the horrible truth behind WorryFree’s idyllic exterior—a particularly unsettling form of slave labor I won’t spoil here—he sets out to expose their lies and exploitation. He goes on every TV show, every network, even (literally) dipping himself in shit to get on the most popular game show in the country, all to broadcast disturbing video evidence of WorryFree’s secrets. He urges everyone to call their congressman to stop the madness. This is usually the part of the movie where people finally listen up and the evil CEO is run out of town.

But none of it does a thing.

The media push fails. Civic responsibility fails. Liberal democracy fails. The congressmen everyone called end up praising WorryFree’s ingenious slave-driven efficiency on live TV. It turns out the whole system really is rotten, no matter who the president is, or whether you do an epic mic drop on MSNBC. The only option left is where Cassius should have been all along: the picket line. When even the picket is smashed by police, the tide begins to turn for real. The final scene—jarring, weird, and hilarious—takes it even further and projects violent overthrow of the status quo. Riley does not stop at “the evil boss is replaced by the hero,” or even “the union wins.” The real catharsis comes from permanent, revolutionary class warfare.

Sorry To Bother You couldn’t be more out of place among the recent servings of warmed over schlock meant to “sum up” our current moment. Movies like The Post offer a masturbatory pageant about how America can always count on its noble institutions (all the same ones that fail Cassius) to save us from disaster, while films like Red Sparrow cater to the even dumber impulse that blames all the chaos and brutality on nefarious foreigners (Russians) pulling the strings.

Riley’s film dumps all that in the trash where it belongs, and offers something way more real, and way more fun. If we’re lucky enough to survive the next few years, it will be a treat to see what he does next. Hell, maybe with the success of Sorry To Bother You, Bill Maher will invite Riley back on his little talk show. If he’s got any sense, Maher might opt to shut his mouth and learn something this time.

Brendan James is a writer, musician, and co-author of The Chapo Guide to Revolution: A Manifesto Against Logic, Facts, and Reason. He lives in Brooklyn.

Review
Mission Not Quite Accomplished
“Vice” is a flawed but valuable corrective to liberal Bush era amnesia.
Brendan James
Sign up for our email newsletter, featuring exclusive original content