Mission Not Quite Accomplished

“Vice” is a flawed but valuable corrective to liberal Bush era amnesia. 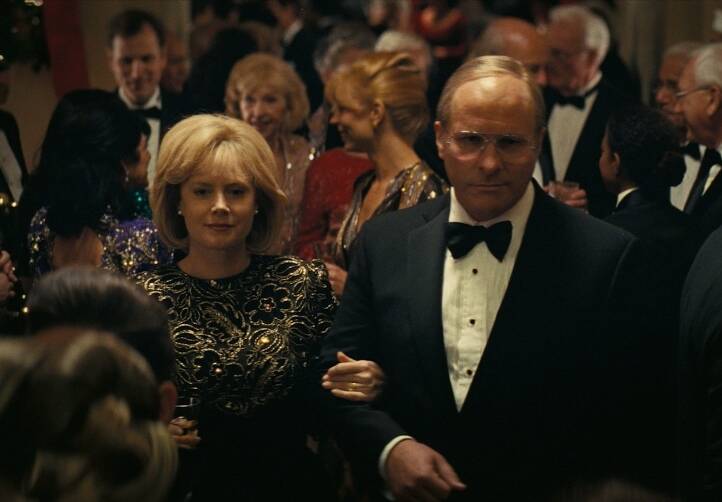 A WELL-MEANING FRIEND recently took me to see the Broadway adaptation of Paddy Chayefsky’s Network, still probably the gold standard for American social satire. As Bryan Cranston hammed it up as Howard Beale, I had the displeasure of watching Chayefsky’s masterpiece degenerate into a mind-numbing MSNBC morality play. The show butchered all the best scenes to wink and nod about Donald Trump, Fox News, and, of course, “the Russians.” The Sorkin-ization was complete when a new epilogue warned of the danger of “absolutist beliefs”—a total non-sequitur in a story about the nightmarish Ouroboros of capitalism, but one that went over well in an auditorium full of smugly moderate Upper West Side boomers.

In a cultural moment like this—where Network is reimagined as The Newsroom, George W. Bush is suddenly Michelle Obama’s Secret Santa, and FBI gila monster Robert Mueller gets the Deviantart treatment—Adam McKay’s Vice is a welcome dose of iconoclasm. It is also a bit of a missed opportunity, but perhaps not for the reasons offered by most of its critics.

In an epic and kinetic biopic, McKay aims to trace the current state of our political, social, and environmental catastrophe under Trump to the apocalyptic shadow-presidency of Dick Cheney, which began nearly two decades earlier. Vice follows Cheney from his unglamorous early years as a Wyoming idler up through his unsavory achievements in the public and private sectors, climaxing with his brutal organization and execution of the War on Terror.

Much like McKay’s award-winning 2015 opus The Big Short, his new movie is slick, stylized, and polemical, interrupting the action with burlesque gags and didactic sidebars. It does not pretend to be “objective,” and is therefore already a more accurate history than most of the schlock Hollywood puts out about the modern American empire (see The Hurt Locker, American Sniper, and In The Valley Of Elah for a taste of the “shoot-and-cry” genre).

Unlike its predecessor, however, reviews for Vice have been divided. Christian Bale, everyone agrees, turns in a comedic yet chilling performance as ice-chewing angler Dick Cheney. Many also enjoyed the hilarious and uncanny turns from Amy Adams as domineering co-conspirator Lynne Cheney, Steve Carell as ferret-faced operator Donald Rumsfeld, and Sam Rockwell as failson bungler George W. Bush.

The negative reviews instead tend to focus on McKay’s job as writer and director. One of the most common complaints relates to his understanding of politics and the resulting portrayal of Cheney. A representative critique comes from national security writer and onetime Iraq War supporter Fred Kaplan, who declares that the director is out of his depth: “McKay reportedly read some very good books about Cheney . . . but his own grasp of Washington politics is thin.”

Kaplan calls the film an example of Lenin’s term “infantile leftism” (a phrase that does not mean what he thinks it does). In this reading, Vice “fails as history” by treating Cheney & Co. as power-hungry opportunists rather than sincere ideological mandarins. He cites a scene in which a young Cheney asks Rumsfeld, “what do we believe?” which leaves the latter doubled over laughing:

The film portrays Cheney’s political ambition as entirely cynical, geared toward nothing but power for its own sake. […] In fact both men, especially Cheney, were deeply conservative. To discount their ideological impulses gives them too little credit for their egregious actions.

Sure, the cynicism in that scene is played up for laughs. But the fact is that, like Rumsfeld (once known as a pain in Nixon’s ass for pushing for an end to the Vietnam War), Cheney embraced a jumble of principles and positions throughout his entire career. He was, at different moments in his life, a budget hawk, a "deficits-don't-matter" guy, a practitioner of realpolitik, and, finally, an insatiable warmaker. In a strange pattern, each ideological shift happened to enable a new way for him to advance his career, enrich his allies, and expand US hegemony.

To some, Vice’s angle makes Bale’s character a “cartoon villain.” James Mann, author of a great book on Bush’s war cabinet, gets hung up on this as well, writing that Vice is trying too hard to conflate the ideologue Cheney with the fraudster Donald Trump. However, by the film’s climax, McKay actually does grant that Cheney became imbued with an earnest (and evil) ideology, what one review termed the national security-obsessed “threat-ism.” But it seems romantic, rather than realistic, to insist he had a heartfelt philosophical outlook his entire life. McKay subscribes to the perfectly admissible argument that conservatism arises from the desire to build and enforce social hierarchies and is justified later by any number of respectable intellectual figleaves. This point of view may not be sophisticated enough for folks like Kaplan but it rings true in a film about an oil man turned warlord.

This is not to say Vice quite accomplishes its mission. For those that have no problem with an in-your-face, partisan black comedy, a more persuasive critique of the film may be that McKay doesn’t go far enough, politically or aesthetically.

On the former count, Vice never really reaches a deeper structural critique of America. McKay paints the pillage and slaughter in Afghanistan as “the good war,” cuts Colin “Aluminum Tubes” Powell way too much slack, weirdly suggests that Israel was against the invasion of Iraq, and tacks on a cranky post-credits mockery of vocal-fried millennial moviegoers who don’t care enough about politics, which clashes with the populist tones that open the film. (This echoes one of the few cringeworthy moments of The Big Short, in which subprime mortgages are explained by Margot Robbie soaking in the tub—as if only horned up men would be watching a movie about such complex politico-economic issues.)

But, to the aesthetic point, a more profound critique is difficult within the constraints of a biopic. McKay seems aware of this, but is contracted to see it through. He certainly makes gestures toward a deeper rot, beyond Cheney, back further in time—Nixon’s bombing of Cambodia is echoed in Bush’s razing of Iraq; Ronald Reagan is seen croaking the phrase “Make America Great Again” to throngs of supporters—and across so-called “party lines” (both Senators Mike Pence and Hillary Clinton are shown backing Cheney’s imperial adventure in Iraq). But commitment to the form too often plays out as a cinematic treatment of a decade’s worth of DailyKos blogs: deconstructing the “Unitary Executive,” Cheney saying “fuck you” to Senator Pat Leahy, a half-explained reference to the outing of CIA spook Valerie Plame, his shooting a hunting buddy in the face, etc.

Attempting a biopic about Cheney is of course understandable, given his central role in the US government’s web of horrors and its lasting effects. On the other hand, Cheney as protagonist is confining. He lacks the theatrical flamboyance of Rumsfeld, the cretinous slapstick of Bush, or the pretentious wonkery of Wolfowitz. (I’d also watch a whole movie of Thandie Newton’s Condoleezza Rice from Oliver Stone’s Bush-era clunker W.) Christian Bale or no, Cheney himself has a very small range of dramatic expression. As Peter Capaldi’s character says to a Defense Department gremlin in Armando Iannucci’s Iraq farce In The Loop, “I've come across a lot of psychos, but none as fucking boring as you.”

Vice shines when McKay’s frustration with the form leads him to break from it, whether it’s a saccharine end-credits fakeout in the middle of the film, or a trippy montage of Cheney’s heart on a slab, beating away while carnage explodes in Iraq and forest fires rage in California. Two-thirds of the way into the film, it almost feels as if Cheney has disappeared while the grotesque consequences of his Iraq plans overwhelm the viewer, to exhilarating effect. You can tell McKay wants to deal with things beyond this one character, but he’s forced to return to Cheney’s individual arc, which isn’t as fun or as interesting. Ten pounds of shit in a five pound bag.

All of this makes Vice an enjoyable, solid undertaking, but one that will hopefully go down as the tough sophomore album in McKay’s new run of left-leaning agitprop. That “propagandistic” approach irks some critics, but at a time when Cheney gets described as part of “the Resistance,” propaganda is downright necessary. Vice falls short not by being too mean or scatterbrained but by playing it safe, right on the precipice of a more exciting experiment. As Boots Riley’s Sorry To Bother You proved last year, more radical social satire demands more radical forms of storytelling, and vice versa.

Brendan James is a writer, musician, and co-author of The Chapo Guide to Revolution: A Manifesto Against Logic, Facts, and Reason. He lives in Brooklyn.

Review
Boots Riley Is Telling Liberal America Not to Be Fooled
Sorry to Bother You is a powerful rejoinder to the capitalist monoculture of our time.
Brendan James
Sign up for our email newsletter, featuring exclusive original content