The antisemitism envoy is exactly what congressional Republicans fear the Islamophobia envoy could become: a threat to free speech. 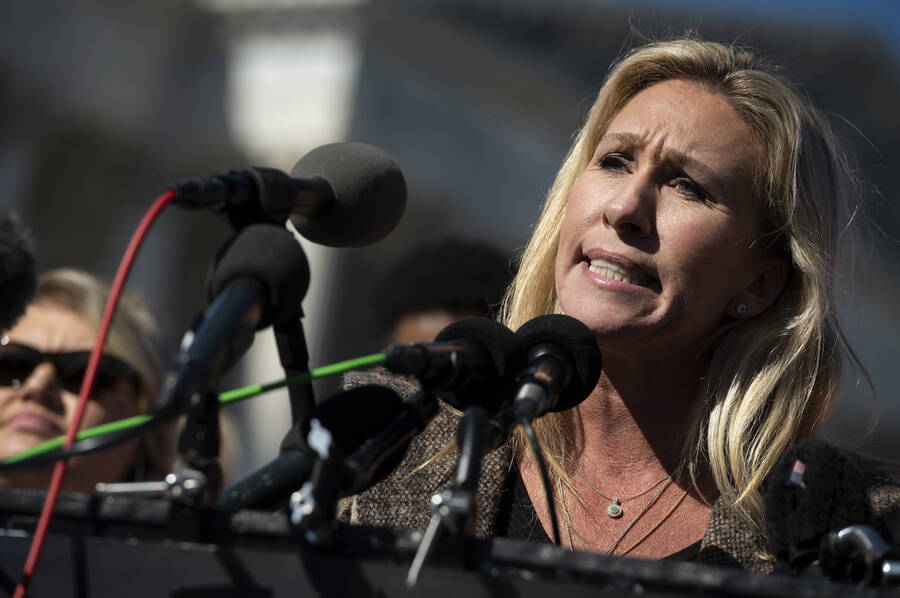 Earlier this month, the House of Representatives considered a bill to create a State Department envoy to monitor Islamophobia overseas, a position modeled on the one that already exists to monitor global antisemitism. Every single House Republican voted no. In explaining why the State Department does not need an envoy to combat Islamophobia, however, they repeatedly employed anti-Muslim stereotypes that demonstrate just how prevalent Islamophobia remains in Washington. Rep. Marjorie Taylor Greene warned that the legislation might shield Muslims who rape non-Muslim women. Rep. Ken Buck claimed the bill might render it Islamophobic to accuse Rep. Ilhan Omar, one of the bill’s co-sponsors, of marrying her brother. Rep. Scott Perry labeled America’s largest Muslim advocacy group, the Council on American–Islamic Relations, a terrorist organization, and warned that the legislation might entitle it to federal funds.

These accusations shared a common mantra: that because Omar’s legislation doesn’t define Islamophobia, it could be interpreted in ways that violate constitutional rights. “Without clear definitions,” warned Rep. Guy Reschenthaler, “even First Amendment-protected speech could qualify for an investigation.” Rep. Michael McCaul claimed that the bill’s discussion of Islamophobia “is so vague and subjective that it could be used against legitimate speech.” Rep. Perry declared that “the goal is to silence dissent.”

It is true that the legislation—which appears unlikely to pass the Senate—doesn’t define Islamophobia. What it does instead is list the behaviors that the envoy would monitor: ‘‘acts of physical violence against, or harassment of, Muslim people, and acts of violence against, or vandalism of, Muslim community institutions, including schools, mosques, and cemeteries” as well as “instances of propaganda in government and nongovernment media that attempt to justify or promote racial hatred or incite acts of violence against Muslim people.” The litany is similar to the one outlined in the 2004 law that created the antisemitism envoy position. That law doesn’t define the bigotry it seeks to combat either, which has never seemed to bother Republicans in Congress. Yet many conservative legislators took pains to distinguish the Islamophobia job, which they oppose, from the antisemitism job, which they support.

The irony is that in warning that an overly broad definition of anti-Muslim bigotry might infringe on individual freedom, congressional Republicans inadvertently highlighted the ways in which an overly broad definition of antisemitism already does. While the law creating the antisemitism envoy didn’t offer a definition of Jew-hatred, its silence on that point has allowed establishment Jewish groups to successfully agitate for an extremely expansive one. And that definition has made the antisemitism envoy exactly what congressional Republicans fear the Islamophobia envoy could become: a threat to free speech.

After several years of overseeing an antisemitism envoy without a formal definition of antisemitism, the State Department announced in 2011 that it had adopted one. That definition was rooted in what the Soviet dissident turned Israeli politician Natan Sharansky called the “3D Test.” In a 2004 essay, Sharansky had proposed three criteria that, he claimed, could be used to detect the presence of antisemitism in statements critical of Israel: “demonization” (wildly exagerrated criticism), “delegitimization” (challenging Israel’s legitimacy as a Jewish state), and “double standards” (criticizing only Israel for actions also committed by other countries). Following Sharansky’s lead, the State Department definition included “applying double standards [to Israel] by requiring of it a behavior not expected or demanded of any other democratic nation” and “denying Israel the right to exist” among its examples of Jew-hatred. This language has serious implications for pro-Palestinian free speech. The first example could be used to declare a Palestinian activist antisemitic for boycotting Israel but not other countries. The second could be used to declare that activist antisemitic for supporting equality under the law in Israel-Palestine rather than a state that favors Jews over Palestinians.

After 2016, when European governments adopted the International Holocaust Remembrance Alliance (IHRA)’s definition of antisemitism, the State Department began using it as well. That definition, too, lists applying “double standards” to Israel and “denying the Jewish people their right to self-determination” as examples of bigotry against Jews. Donald Trump’s appointee to the envoy position, Elan Carr, and his boss, Secretary of State Mike Pompeo, broadened the definition of antisemitism still further by alleging that it was antisemitic to boycott Israel, boycott Israeli settlements in the West Bank, separately label products from Israeli settlements, or even publicize which foreign companies operate in those settlements.

As envoy, Carr energetically deployed this sweeping conception of antisemitism. Last year, when the United Nations Human Rights Office published a list of global companies that work in West Bank settlements—which the UN considers illegal under international law—Carr called it an “appalling example of [anti-Israel] bias.” At Pompeo’s direction, Carr also launched an investigation into organizations that “support” the BDS movement. According to Politico, Carr’s office considered labeling Amnesty International, Human Rights Watch, and Oxfam antisemitic during this process, despite the fact that none of them has taken a position on BDS. The logic, apparently, was that their reports on Israeli human rights abuses fuel the boycott movement. According to The Times of Israel, opposition from career State Department officials delayed the initiative until Carr left his post.

Carr claimed that his efforts did not threaten free speech. “Condemnation,” he insisted, “does not mean censorship.” But that’s not always true. In 2019, for instance, Carr repeatedly praised the German parliament for passing a resolution labeling BDS antisemitic and declaring that its supporters should not receive state funds. That resolution, according to an open letter signed by more than 1,500 artists, writers, and academics, “has created a repressive climate in which cultural workers are routinely asked to formally renounce BDS, as a prerequisite for working in Germany.”

Carr’s efforts also contributed to a repressive climate for Palestinian rights supporters in the US. In the past, the antisemitism envoy has focused their efforts overseas. But Carr championed his broad definition of antisemitism domestically as well. He called Jewish Voice for Peace, an American Jewish group that supports BDS, “an organization that traffics in antisemitism” and celebrated a 2019 executive order in which Trump instructed the federal government to employ the IHRA definition when investigating antisemitism allegations at American universities. As in Germany, this push to use the IHRA definition and equate BDS with antisemitism has threatened free speech. In Texas, which has adopted the IHRA definition, a Palestinian American speech pathologist was told in 2018 that according to state law she could not work in the Austin school district unless she pledged not to boycott Israel. A lawyer who would not sign the anti-boycott pledge was prevented from working as a public defender in Arizona. A newspaper in Arkansas was required to oppose boycotts in order to receive advertising from a state university.

There’s no evidence that any of this bothers the congressional Republicans who claim an Islamophobia envoy would menace free expression. In fact, Rep. Reschenthaler, who last week warned that the creation of an Islamophobia monitor could lead to the “investigation” of protected speech, has cosponsored legislation that would require the Department of Education to use the IHRA definition when it investigates allegations of campus antisemitism. Rep. McCaul, who claimed the Islamophobia envoy bill “could be used against legitimate speech,” and Rep. Perry, who predicted it would “silence dissent,” both support a bill to ensure that states can pass laws denying contracts to BDS supporters—laws that judges in Texas, Arizona, and Arkansas have declared unconstitutional.

Imagine if the circumstances were reversed: if American politicians argued against an antisemitism envoy by publicly fretting that the position would limit their ability to accuse Jews of secretly controlling America’s banks, yet cheered on an Islamophobia envoy who promoted laws prohibiting Americans who boycott Saudi Arabia from working in America’s public schools. It’s hard for most American Jews to envision such a reality. But it is the equivalent of the world in which American Muslims currently live.

A previous version of this piece mischaracterized the balance of power in the US Senate.