A new exhibition in Miami seeks to establish Maryan S. Maryan’s work as vital to the landscape of 20th-century art. 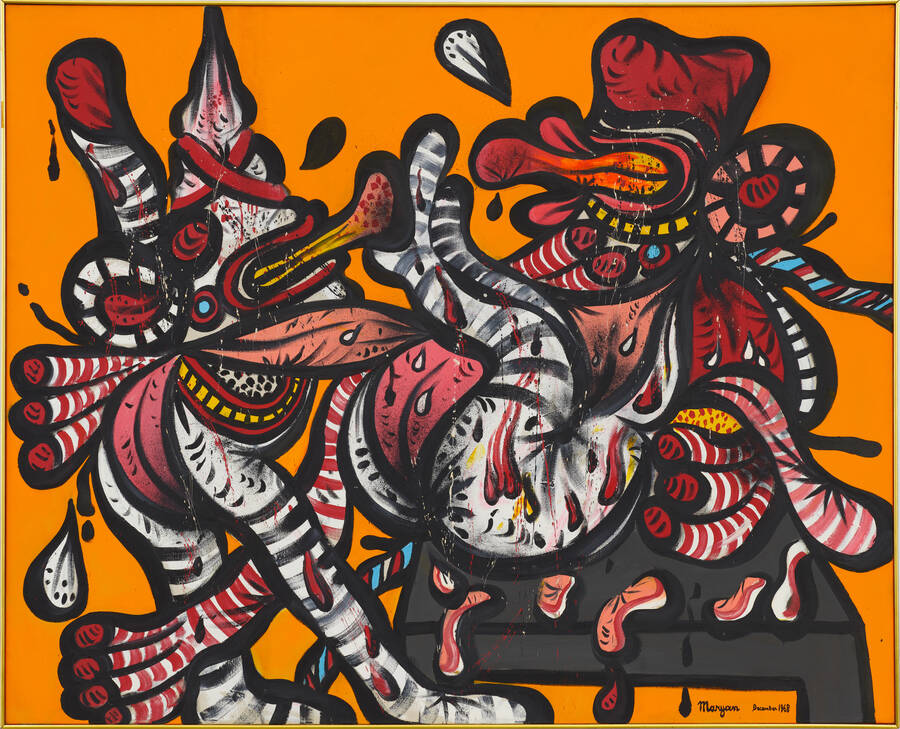 Pinkas Bursztyn was born in Nowy Sącz, Poland in 1927 into a working-class Orthodox Jewish family. When he was 12 years old, he was captured along with his parents and two siblings by the Nazis. Over the next six years, Pinkas was interned at a series of concentration camps, including, finally, Auschwitz-Birkenau, the experience of which would haunt him for the rest of his life. In 1945, the Russians came to liberate the camps, and the Nazis fled, wreaking havoc on their way out. Bursztyn was shot eight times. When he left Auschwitz, he was the only surviving member of his family.

The decades that followed took Bursztyn on a circuitous route—from displaced persons camps in Poland and Germany to Palestine to France, where he reinvented himself as a painter and gave himself a new name: Maryan S. Maryan. In 1962, Maryan moved to New York City and, eventually, into the storied Chelsea Hotel, a bohemian landing pad for artists and musicians from Beat poets and Warhol factory luminaries, to punk rockers and pop stars. Even as he continued to struggle with the trauma of his past, Maryan found success through his work; his bold, brash paintings were exhibited at major museums around the world, including the Guggenheim and Musée d’Art Moderne. Following his death from a heart attack in 1977, Maryan’s paintings fell into obscurity.

Now the curator and writer Alison M. Gingeras is seeking to set the record straight with an exhibition on display through March 20th, 2022 at the Museum of Contemporary Art in North Miami. My Name is Maryan, the first comprehensive retrospective of the artist’s work, situates Maryan’s bombastic, emotional paintings as a vital element in the landscape of postwar art. Currently a guest curator at MOCA and an adjunct curator at Dallas Contemporary, Gingeras—who has previously held curatorial positions at numerous institutions, including the Solomon R. Guggenheim Museum in New York, the Centre Pompidou in Paris, and Francois Pinault’s Palazzo Grassi in Venice—has brought together recently discovered works, archival documents, photographs, new scholarship, and oral histories to make a compelling case that Maryan’s work deserves to be both considered on its own terms and reevaluated alongside his peers. I spoke with Gingeras about revisiting Maryan’s ouevre, his status among his contemporaries, and the vexed meanings of thinking about Maryan as a “Holocaust artist.” This conversation has been edited for length and clarity.

Dana Bassett: What moved you to curate this exhibition?

Alison Gingeras: I wanted to tell Maryan’s story in all of its complexities. I assumed that most visitors will have never heard of the artist before visiting the exhibition, so I felt both a freedom and responsibility to organize the viewer’s experience in a way that promoted textured engagement. When the Holocaust is foregrounded, often that becomes the primary—or even sole—lens through which people make sense of a work or a life. Telling the story chronologically would have meant beginning with Maryan’s childhood and his imprisonment by the Nazis, and because I didn’t want to overdetermine the visitors’ understanding of his work, I had to find another way.

DB: Can you say more about how your commitment to surfacing the story’s full range of meanings informed your choices about the exhibition’s layout?

AG:The exhibition opens with a reconstruction of a studio that Maryan had at the Chelsea Hotel in New York in the 1970s, where he made some of his most important work. It was an incredible, eclectic space—covered floor-to-ceiling with his own paintings, the work of other artists, and a host of cultural objects from Africa, Oceania, and Poland. I wanted the viewer to enter into this room and really absorb the intensity of his work. 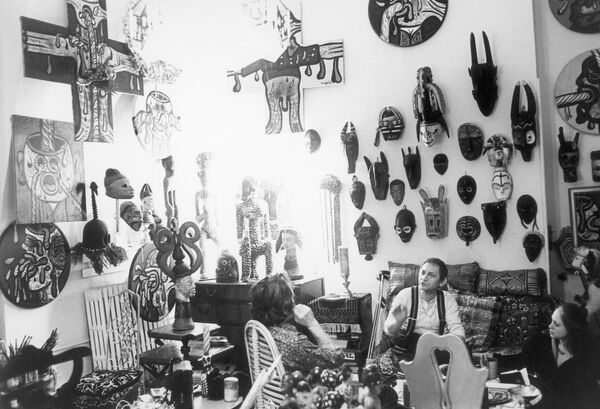 From there, the show is arranged thematically. The visitor moves through various series—abstract figure paintings, works in black and white, paintings with historical and religious references—before arriving at the heart of the exhibition, which explores Maryan’s experience of the Shoah. It is here that the viewer encounters Ecce Homo, a seminal film he made in 1975. Ecce Homo is one of the first filmed Holocaust testimonials. Maryan talks directly into the camera about his experiences, his speech sporadically intercut with still images of sociopolitical events from Nazi marches in Germany to hooded Klan rallies in the United States; Maryan himself appears in images, too, in various states of proximity to violence—bound with ropes, or holding an automatic rifle. This was critical to me: Maryan saw and underscored connections between the fascism of Nazi Germany and the violence of the Vietnam War and Jim Crow. That means when we look at his work, we are not just looking back at an obscure figure of the 20th century; we are facing an artist who can help us to understand a shared struggle against all forms of authoritarian violence.

DB: How did you think about making space for deep engagement with the aesthetic dimensions of Maryan’s work even as you attend to his relationship with these canonical political events?

AG: It’s a good question. The richness of the work derives precisely from the coexistence of the sociopolitical messages and the aesthetic choices in Maryan’s work. To honor that, I had to both engage with relevant histories and to be attentive to moments where historical frameworks are insufficient to facilitate a meaningful encounter with the paintings. There’s a lot of wall text in the show that offers context for the work and situates Maryan in dialogue with his peers. But at the same time, I tried to group the paintings so there was also an aesthetic conversation taking place; I wanted the exhibition-goer to experience the visceral impact of the visuality of his work, to be open to a multiplicity of meanings.

My curatorial attention to the limits of language takes its lead from the work itself. Maryan often painted characters that he called, using the French word, “personnages”—almost all of whom have a substance coming out of their mouth. The nature of this substance is not clear. It’s rendered in different colors. Many people read it as vomit. To me, it recalls the impossibility of speech in the face of extraordinary trauma. From notebooks he kept in the early ’70s, which are represented in the exhibition, we know that he had a kind of nervous breakdown and lost the ability to speak, or at least to speak with his wife. His doctor said, “You should keep notebooks. You should make drawings.” These drawings—there are over 500 of them—contain images from his childhood, his imprisonment, and his life after surviving the Holocaust. Given that the drawings both document the horror and record the survival, I think the emissions from the mouth might also be viewed as a life force that could be seen as exiting his body, but they could also be seen as entering the body. 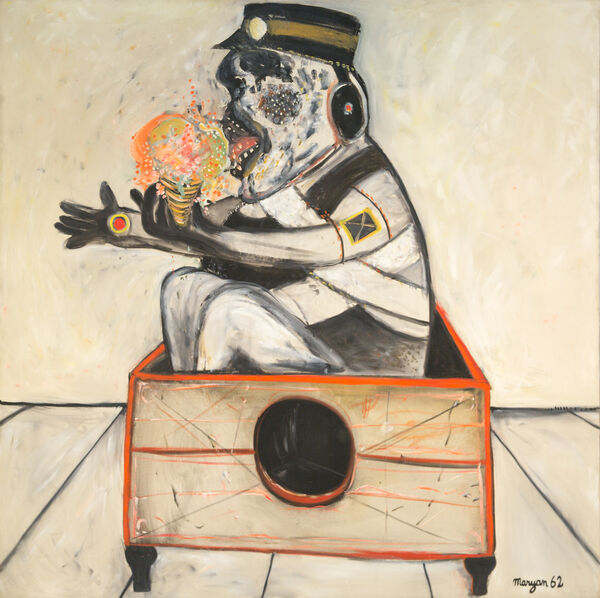 DB: It’s fascinating that it was really only in the 1970s that Maryan began in earnest to give form to his experiences of the Holocaust. It took him 30 years to process, but it also took engagement with his peers to understand the aesthetic possibilities. How do you understand Maryan as part of a community of artists?

AG: In the 1950s, and the ’60s, Maryan and his wife were first in Paris and then in New York, and during this time they tried to lead a very bourgeois life—living in a conventional way, dressing in a very conventional way. Then something broke for him. In 1970, Maryan had his first psychotic episode, and he revolted against the trappings of his bourgeois existence. He left his wife and moved to the Chelsea Hotel, where Patti Smith and all of these Warhol Factory people were living and making art. The Bohemian atmosphere was liberating for him. I met a woman who moved to the Chelsea at about the same time as Maryan. She told me he said that being there was the first time he felt at home in decades. It’s clear he experienced some sort of cathartic release at the Chelsea that allowed him to make work that really plumbed the depths of his memories. 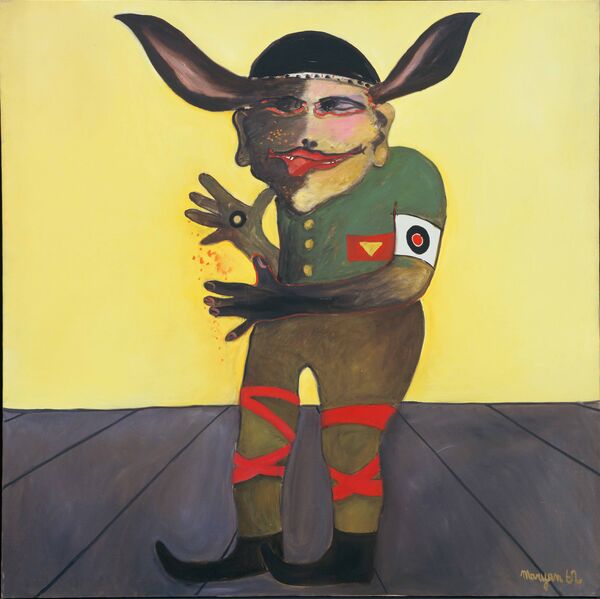 DB: I appreciated how you were thinking not only about Maryan’s immediate surroundings, but also his place in artistic movements. The heavy symbolic style of the painting feels at once very specific to his experience, but also keyed into the work of his contemporaries.

AG: Absolutely. Maryan’s arrival at a kind of cartoony figuration resonates deeply with, among others, the styles of numerous artists of the postwar period who were educated or came of age in Chicago. To draw out those connections, I chose to include work by H. C. Westermann and Leon Golub, as well as June Leaf. June and Maryan met in the early ’50s, when she was in Paris on a Fulbright, and I believe they mutually influenced each other very deeply.

Maryan also had stylistic and thematic kinships with artists on the other side of the Atlantic. Though not himself officially part of any movement, he explored a lot of the same subjects as the CoBrA group, who were very interested in the question of humanism in the aftermath of World War II and was friends with members of CoBrA, including Pierre Alechinsky, with whom he shared a gallery for over 20 years. It was very important to me that people who visited the exhibition understood that Maryan’s work did not take place in a vacuum. His work is visually and conceptually as powerful, if not more so, than any of his peers. He deserves to be inserted into the canon of 20th-century art.

Dana Bassett is the development director for Jewish Currents.