Q & A with Gabi Kirk

An interview with the author of our recent feature on California’s ethnic studies curriculum. 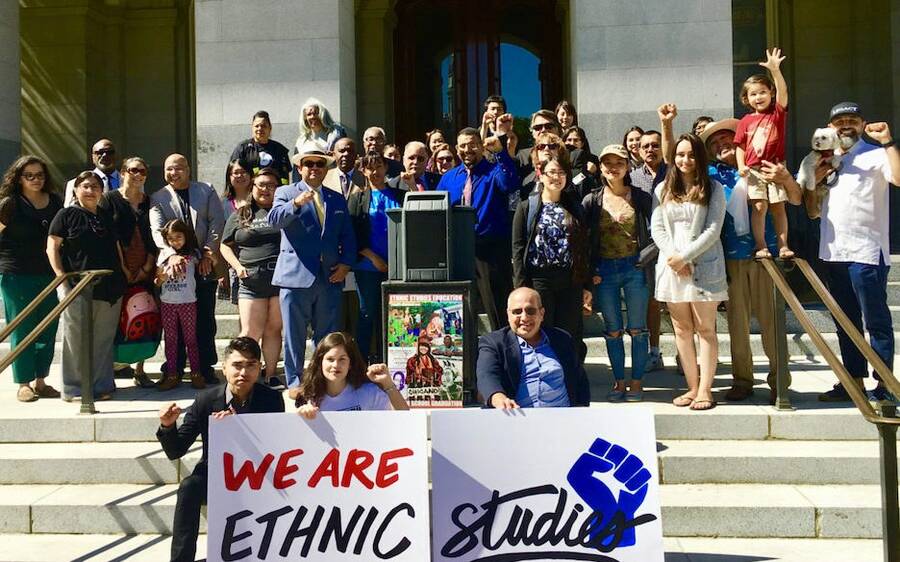 Last week, Jewish Currents published a feature on the recent battles over an ethnic studies curriculum in California, which has faced attacks from pro-Israel organizations. This week, Jewish Currents Newsletter Editor David Klion talked to the author—Gabi Kirk, a graduate student at UC Davis—about the long process of researching and writing the article and some of the responses it has provoked.

What follows has been edited for length and clarity.

David Klion: First of all, I wanted to say I love the thoroughness and nuance your piece brings to a fraught issue. What got you interested in this topic?

Gabi Kirk: I’ve lived my whole life in California and grew up going to public schools. My high school, in a wealthy Bay Area suburb, was majority Asian and then white (very few Latinx or black students), and I was one of a handful of white Jews. Outside of school I had this racially diverse friend group through my Jewish youth group, and racism within that setting was erased or brushed off because “we’re all Jews.” Looking back, what I understood race and racism to be was skewed by those settings. Having an ethnic studies curriculum earlier in my life would have meant a lot to many people I know, and would have probably made me a better friend and person.

More recently, I had noticed that as leftists became more vocal in criticizing Israel’s human rights abuses, pro-Israel groups were moving away from their regular talking points about security in favor of those steeped in neoliberal “identity politics.” Groups like AIPAC, the Anti-Defamation League (ADL), and the American Jewish Committee (AJC) began to recruit non-Jewish student government leaders of color to attend AIPAC conferences and free Israel trips to “inoculate” against divestment resolutions. And they would invite spokespeople like Chloé Valdary and Hen Mazzig to speak on college campuses and claim to make an “intersectional” defense of Zionism, which allowed these groups to position themselves as victims of racism. This story allowed me to explore a case study of what that looks like.

When the Ethnic Studies Model Curriculum (ESMC) backlash first hit last summer, I got a lot of questions from lefty Jewish friends who know my area of research. They were mistrustful of all of the pro-Israel groups involved in the backlash, but also felt surprised and hurt that it seemed like people of color didn’t care about antisemitism. I felt like that framing was inaccurate and harmful to a long-term solidarity-building project.

DK: What obstacles or surprises did you run into while reporting?

GK: I reached out to Jews Indigenous to the Middle East and North Africa (JIMENA), the AJC, and the California Department of Education (CDE) repeatedly; all of them either did not reply to my messages or did not want to speak on the record. I was particularly surprised and disappointed when the CDE—a public branch of the state government—declined to have an on-the-record interview after bumping my request multiple times.

However, I ended up getting to speak to a lot more scholars and educators involved in the behind-the-scenes process of the ESMC than I had planned, which revealed much more than I anticipated. I am particularly grateful to Dr. Jeanelle Hope and Aimee Riechel for their honest and thoughtful observations on the curriculum’s development and the future of ethnic studies as a whole.

DK: At the heart of this article is an old debate about the extent to which Jews, and in particular Ashkenazi Jews, have been assimilated into whiteness in the United States. For readers unfamiliar with the nuances of this discourse, how would you account for why an ethnic studies curriculum would view Jews differently than, for instance, Arab Americans?

But in terms of ethnic studies, one reason for the difference is the history of the discipline, which was one of the hardest parts to lay out in my article (thanks to the editorial team, particularly Mari Cohen, for helping me untangle this). Arab American studies is part of ethnic studies now because it was part of it when ethnic studies started, and Jewish studies is not now because it wasn’t then. But why were Arab Americans part of it in the 1960s, when we know Jews were also well-represented in the anti-imperialist left that fomented ethnic studies? One reason is that the larger “left” of the 1960s was not so racially harmonious as it is often nostalgically remembered.

If readers are interested in learning more about that, I would recommend Keith Feldman’s A Shadow Over Palestine: The Imperial Life of Race in America and Michael Fischbach’s two newest books, Black Power and Palestine: Transnational Countries of Color and The Movement and the Middle East: How the Arab-Israeli Conflict Divided the American Left.

One thing that came up in multiple interviews but ended up getting cut from the article: ethnic studies is not critical whiteness studies. These are distinct fields that emerge at different time periods and parts of the academy. The ethnic studies scholars and educators I spoke to had really different things to say about whether critically analyzing whiteness is a major part of ethnic studies, even if they felt like it was in general an important thing to do.

DK: Siamak Kordestani, the former assistant director of the American Jewish Committee’s Los Angeles office and a vocal opponent of California’s ethnic studies curriculum, has taken to Twitter to criticize the article, pointing out that it isn’t only Jewish groups that are driving opposition. Writing in The Jewish Journal, Ariel Sobel accuses the experts you spoke with of unfairly equating progressivism with anti-Zionism, a point echoed by Kordestani. How do you respond to these criticisms?

GK: These criticisms would rather not deal with the actual substance of Arab American studies or teaching Palestine in the classroom, because there’s not much they can say there. Their only tactic is to confuse, distract, and then paint themselves as the victims.

I find Kordestani’s criticism to be completely predictable. When his tweets falsely accusing Jewish Currents of antisemitism were rebuked publicly by editor-in-chief Arielle Angel, he immediately pivoted to claiming that I “buried” the criticism of non-Jewish groups. I’m not quite sure what he expected from a Jewish magazine writing for an audience that would want to hear about Jewish angles on a story first. I’m less concerned with counting and calculating the demographic makeup of the ESMC’s critics—or for that matter, of its defenders. As I clearly explained in my article, ethnic studies’ power comes less from equalizing racial or ethnic diversity and making sure everyone has a “seat at the table” than from asking: what is that table in the first place? Who made it, and who maintains it? Do we want that table to stand as it is, or do we need to build a new one?

Sobel’s essay is bizarre in so many ways, and not only because they took two days to try to address what took me five months to unravel. Sobel cherry-picked a quote from a two-decade-old scholarly article by the sociologist Jessica Greenbaum—a quote that, I would argue, my article agrees with. Elsewhere in her article, Greenbaum argues:

As a Jew, I expect more from other Jews. I expect them to examine their white skin privilege and class privilege (where applicable). I also expect them to understand that when they reinforce racism, they are actually re-inscribing anti-Semitism, since they exist under the same umbrella of hatred in our white supremacist society.

This is exactly the point. Solidarity and learning across differences does not just emerge magically and fully formed. It is messy and confusing and requires both looking internally and reaching out.