Many of the hawkish commentators frequently described as Israel experts show surprisingly little interest in the on-the-ground reality in the state they admire. 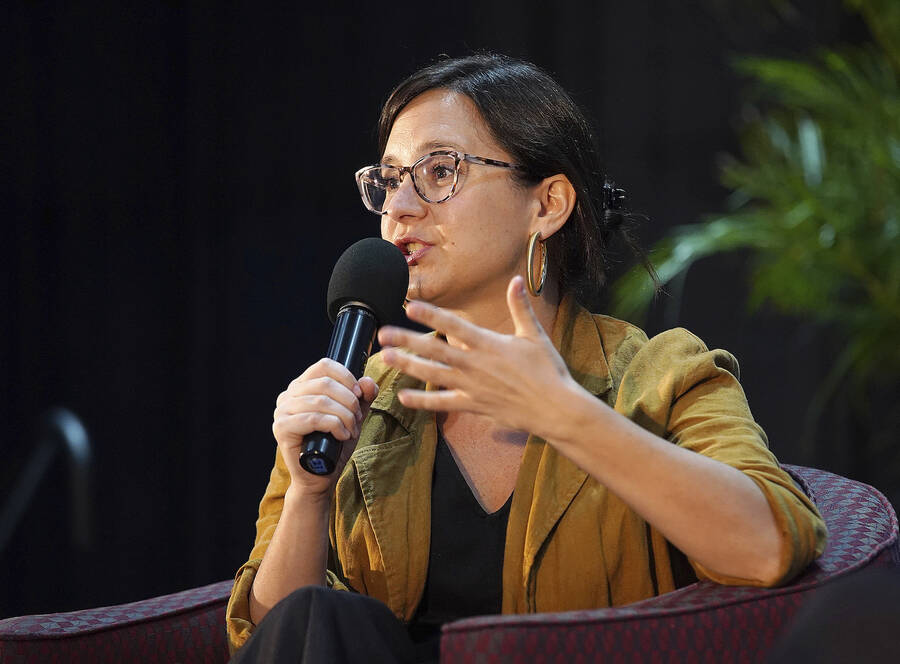 This should not have been an easy year for people who claim that Palestinians under Israeli control enjoy human rights. The first half of 2021 saw two high-profile reports—one in January by B’Tselem, Israel’s most prominent human rights group, and another in April by Human Rights Watch, arguably the most influential human rights organization in the world—arguing that Israel practices apartheid. The second half of the year saw Israel’s designation, without credible evidence, of six well-known Palestinian human rights groups as terrorist organizations, thus banning them inside Israel.

How did high-profile American defenders of Israel respond to these discomforting developments? For the most part, they didn’t. In the two weeks following its release, the B’Tselem report went unmentioned on the Twitter feeds of the commentator Bari Weiss, the historian Deborah Lipstadt, Anti-Defamation League (ADL) CEO Jonathan Greenblatt, American Jewish Committee (AJC) CEO David Harris, and the political advocacy organization Democratic Majority for Israel (DMFI). On Twitter, Weiss, Lipstadt, and Greenblatt ignored the Human Rights Watch report as well. Harris responded once: He called it a “hatchet job,” without explaining why. His organization, the AJC, tweeted a document that purported to debunk the report—but which was devoted almost entirely to detailing the alleged biases of Human Rights Watch and its staff, and didn’t substantively address the organization’s claims. For its part, DMFI labeled the report “Orwellian” and “propagandistic,” again without citing any evidence. It also suggested that the chair of Human Rights Watch’s Board might be a “hypocrite” for investing in companies based in Israel. The same group of commentators also refrained from weighing in on Israel’s assault on Palestinian human rights groups this fall.

What these prominent Israel supporters did discuss in the same period, often in great detail, was antisemitism. In the two weeks following the release of the B’Tselem report, DMFI lauded an op-ed by former presidential and mayoral candidate Andrew Yang in The Forward, which claimed that the movement to boycott, divest from, and sanction Israel (BDS) is “rooted in antisemitic thought.” Greenblatt said it was “hateful” for Representative Rashida Tlaib to accuse Israel of apartheid. In the two weeks following the publication of the Human Rights Watch report, Weiss promoted an essay entitled “Critical Race Theory and the Hyper-White Jew” that detailed the “anti-Jewish nature of the social justice project,” along with a public letter warning about “pernicious notions of ‘Jewish privilege.’” DMFI repeatedly thanked the Biden administration for embracing the International Holocaust Remembrance Alliance’s definition of antisemitism, which includes calling Israel “a racist endeavor” among its examples of Jew-hatred. In the two weeks following Israel’s designation of Palestinian human rights groups as terrorist organizations, Lipstadt gave a lecture in which she declared BDS antisemitic and leveled the same accusation at a decision by the Washington, DC, branch of the environmental movement Sunrise not to partner with Jewish Zionist organizations on a voting rights rally. Greenblatt promoted an essay in which he called anti-Zionism antisemitic and discussed Sunrise DC multiple times. Harris twice discussed a new AJC report on antisemitism.

This contrast—between influential Israel supporters’ lack of interest in the country’s treatment of Palestinians, and their intense interest in how criticism of Israel might translate into hostility to American Jews—illustrates something curious about the Israel debate in the US: It’s not really a debate at all, because Israel’s critics and its supporters focus on completely different things. Israel’s detractors tend to dwell on its denial of Palestinian rights. By contrast, “pro-Israel” commentators show far less interest in how Israel treats Palestinians than in how Israel’s critics treat the Jewish state. Their primary subject isn’t really Israel at all; it’s antisemitism.

The problem is that their definition of antisemitism rests on a distinction between criticism of Israel, which they consider legitimate, and opposition to the country’s existence as a Jewish state, which they deem bigoted. But the validity of that distinction rests on what Jewish statehood actually means for the Palestinians under Israel’s control—the very subject that its highest-profile defenders evade. It’s a sleight of hand. The trick is to enforce a set of boundaries around criticism of Israel without investigating whether those boundaries bear any relationship to reality on the ground.

In her 2019 book, Antisemitism: Here and Now, Lipstadt, who Joe Biden has nominated to be his special envoy to monitor and combat antisemitism, insists, “We must carefully differentiate between campaigns that disagree with Israeli policy and those that essentially call for the elimination of the Jewish state. There is a vast difference between being opposed to the policies of the Israeli government and being an antisemite.” But what if the policies with which you disagree—because they discriminate against Palestinians—are inherent in Israel being a Jewish state? As Human Rights Watch details in its April report, the Israel Land Administration (ILA) oversees 93% of the land inside Israel (that includes East Jerusalem, which Israel has formally annexed, but not the West Bank or Gaza Strip, which it has not). Almost half of the ILA’s seats go to representatives of the Jewish National Fund (JNF), which has described its mandate this way: “The loyalty of JNF is given to the Jewish people and only to them is the JNF obligated.” As a result, the body that controls almost all the land inside pre-1967 Israel allocates and develops it almost exclusively for the benefit of Jews, not Palestinians. As B’Tselem notes in its January report, “Palestinian local councils and communities . . . now have access to less than 3% of the country’s total area” even though Palestinians make up more than 20% of Israel’s citizens.

Reality on the ground, in other words, doesn’t respect Lipstadt’s distinction. The Israel Land Authority isn’t just a government policy. It’s part of the deep structure of a state that belongs to the Jewish people, not to all of its citizens (let alone the millions of stateless Palestinian non-citizens who live under Israeli control in the West Bank and Gaza). In 2018, when three Palestinian members of the Knesset proposed making Israel a “state for all its citizens”—without favoritism based on ethnicity, religion, or race—the Knesset’s speaker ruled that the legislation could not even be debated because it “denies the existence of the state as the state of the Jewish People.” By Lipstadt’s standard, those three Palestinian Knesset members crossed the line into antisemitism by proposing that Israel become a country based on non-discrimination and equality under the law. That’s absurd. But its absurdity only becomes clear if you look at how Jewish statehood actually functions for Palestinians. Which is what Lipstadt and her allies rarely do.

Having insisted that opposition to Jewish statehood constitutes antisemitism, Israel’s defenders argue that any critique that might lead to such opposition constitutes antisemitism, too. According to the ADL, it’s “offensive” to accuse Israel of practicing apartheid. Why? Because, according to Greenblatt, “deriding Israel as an apartheid state is not just a critique but part of a broader effort to delegitimize & demonize the Jewish State.” Lipstadt deploys the same logic against BDS. “If you look at the founding documents of the BDS movement,” she declared in October, “you see an effort to destroy the state of Israel. There’s no question about it. That I find antisemitic.”

These allegations lay the foundation for an endless series of controversies about whether statements critical of Zionism, or protests directed at Israel, constitute antisemitism. And these skirmishes often receive more attention in the media, and from politicians, than Israeli behavior itself. When Nina Turner, a Bernie Sanders-supporting progressive, faced off against the more moderate Shontel Brown in the primary for a special congressional election in Ohio this summer, DMFI President Mark Mellman told reporters that Turner had not condemned BDS. Brown, his preferred candidate, made her opposition to the movement a point of emphasis. But there is no evidence that Brown was ever asked to respond to the human rights reports accusing Israel of practicing apartheid. Similarly, in the Democratic primary for a Florida special election this fall, Omari Hardy’s support for BDS dogged him for much of the short campaign, and was the subject of negative ads by DMFI. There is no evidence that the “pro-Israel” candidate who defeated him, Sheila Cherfilus-McCormick, was asked about Israel’s banning of Palestinian rights groups, although it occurred less than two weeks before election day.

Over the last year, it has become common to hear American progressives condemned for projecting their own concerns—for instance, about anti-Black racism—onto Israel-Palestine. In a recent essay in The Atlantic, Susie Linfield quotes the Israeli journalist Etan Nechin, who claims that the American left treats Israel-Palestine as “an offshoot of [its own] identity politics.” American leftists, Linfield insists, “seem as uninterested in the rich texture of Palestinian politics as they are in Israeli politics.” The irony of this critique is that Israel’s US critics devote far more attention to the realities of Palestinian life than do its supporters. In the two weeks after Palestinian groups were labeled terrorist organizations, for instance, Lara Friedman, president of the Foundation for Middle East Peace (where I’m a fellow) and the former director of policy and government relations at Americans for Peace Now, tweeted about the designation dozens of times. The Palestinian American commentator Yousef Munayyer provided a 26-part tweet thread about the history of Israeli harassment of Palestinian non-governmental organizations. If anyone is navel-gazing, it is Israel’s American supporters, who generally prefer discussing the way pro-Palestinian activists treat American Jews to discussing the way Israel treats Palestinians on the ground. It is a strange feature of the US debate about Israel-Palestine that many of the hawkish commentators and organizations frequently described as Israel experts show surprisingly little interest in how the state they admire actually behaves toward the most vulnerable people under its control.