Pope Francis at the Day of Judgment

A new film by Wim Wenders captures the moral splendor of Pope Francis while ignoring the politics. 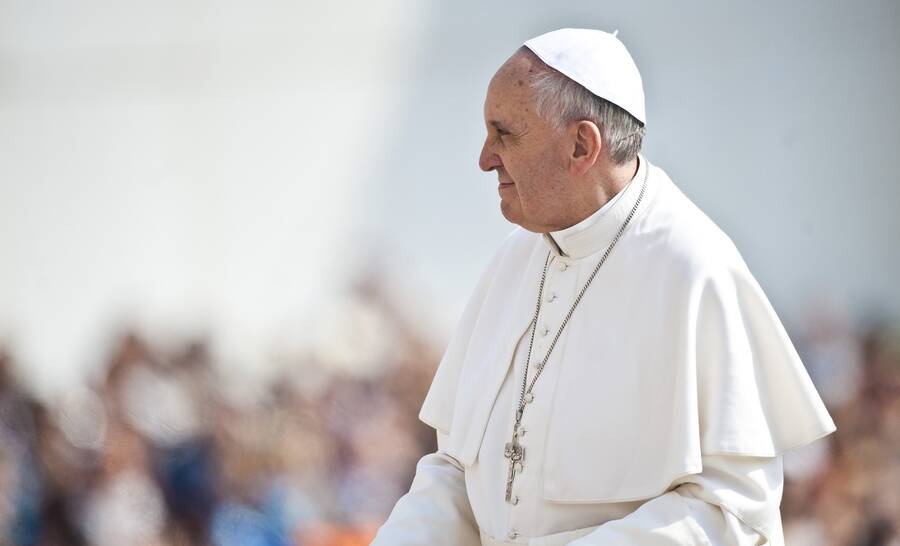 ONE THING a new documentary about Pope Francis reminds us is that it’s been a very long time since non-Catholics were able to look at the Pope as a serious beacon of morality for the modern world.

I imagine most Jews, and others outside the Catholic Church, have typically thought of the papacy the way Public Enemy described Elvis: “A hero to most, but he never meant shit to me.” So how different is our current moment, really? After all, the Vatican is still the Vatican. It’s the institution that shielded and reshuffled thousands of sexual predators within its ranks for decades. It has maintained its ban on condoms among the more than 175 million African Catholics in the face of the continent’s ongoing HIV/AIDS epidemic. And it fostered centuries’ worth of institutional antisemitism, including Pius XII’s silence during the Holocaust.

Yet in 2013, after the unprecedented resignation of the conservative Benedict XVI, the Church also produced a spiritual leader who’s using the power of the pulpit, along with his own notably progressive interpretation of Catholic theology, to promote useful, valuable ideas in the world.

The Vatican-approved Pope Francis: A Man Of His Word opened in US theaters on May 18th, the same day that dozens of Chilean bishops, who stand accused of blocking an investigation into the cover-up of sexual abuse among their country’s priests, handed in their resignations. This was colossally bad timing for a film that was trying to broaden the Holy See’s new course correction beyond the world’s 1.2 billion Catholics. Who wants to watch a squeaky-clean advertisement for Vatican shepherdship amid ongoing reminders that this flock is diseased?

But in another, very different sense, the film couldn’t have picked a more opportune week. At the May 13th opening ceremony for the senseless new US Embassy in Jerusalem, Israel Chief Rabbi Yitzhak Yosef, who only a few months ago compared people of color to monkeys, traded prayers with megachurch moguls Robert Jeffress (who believes all Jews, along with most other religions, are going to Hell) and John Hagee (who has said Hitler was fulfilling God’s plan to return Jews to Israel, and that Hurricane Katrina was “the judgement of God against the City of New Orleans”). None of them, in their combined interfaith moral wisdom, could spare a thought for the dozens of Gazans being shot dead by the Israeli military at the border a few miles away.

Something is rotten in the state of Abraham. The term “Judeo-Christian values” may be employed almost exclusively by Christians, but none of this strange alliance’s most public ambassadors have any clue what the shared tenants of our faiths actually are. Francis’s condemnation of the embassy move in December 2017, and his angry denouncement of the killings in Gaza, stand in stark contrast to this lot. Suddenly, the Pope—the most powerful, most visible Christian in the world, and the one with the least incentive to deviate from conservative teachings—really does start to look like the only adult in the room.

OUR CURRENT POLITICAL MOMENT has created a spiritual crisis that lends Pope Francis its unexpected urgency, but director Wim Wenders, the cinema’s eternal optimist, has no interest in it. Wenders’s greatest fiction films are melancholic works that find hope in humanity almost in spite of itself—even when peering into the abyss of a divided city in Wings of Desire, or staring down the barrel of a self-inflicted apocalypse in Until the End of the World. His documentaries (Buena Vista Social Club, Pina, The Salt of the Earth) celebrate uplifting spirits, usually from the worlds of music and art, whose triumphs over difficult situations are thanks to souls Wenders seems convinced are too good for this world.

Like Martin Scorsese, Wenders was raised Catholic and once wanted to become a priest. But his films strip away the bitter irony that Scorsese slathers over his own work, and in fact seem to unearth Catholic teachings in unexpected places. Paris, Texas, as a 1998 piece in the Catholic magazine Crisis points out, turns a seedy peepshow into a confessional, allowing its wandering hero to triumph over his personal demons.

So it is with Pope Francis: A Man Of His Word. As its subtitle indicates, the film is all about the Holy See making promises. These concern matters both external and internal: things that humans must to do take better care of the planet, as well as ways the Church itself plans to tepidly step away from demonizing LGBTQ people, and acknowledge the evils of sexual abuse. In this way the film becomes a list of concerns about clearly-defined problems, although both the source of these problems and any viable solutions get hazy (one hopes this isn’t Wenders’s way of appealing to a higher power). Yet we still see, with extraordinary intimacy, Francis reckoning with climate change, global poverty, the refugee crisis, mass incarceration and, above all, capitalism itself, which he views as an existential threat to the word of God: “As long as the church is placing its hopes on wealth, Jesus is not there.”

With little in the way of archival material on Francis’s pre-papal days as Jorge Mario Bergoglio, this is almost exclusively a document of Pope-in-present-tense. Key images from his transcontinental travels resonate as public theater: washing and kissing the tattooed feet of Philadelphia prisoners; pulling out of a crowd an elderly nun whom he hadn’t seen for decades; tearfully surveying the overstuffed migrant boats reaching the Greek Isles; and glancing pensively from his helicopter at the Christ the Redeemer statue in Rio de Janeiro.

Wenders also spends a good deal of time on what will likely prove Francis’s most heroic act: Laudato Si’, his encyclical on climate change and its impact on the poor. Upon its publication in 2015, the work enshrined established scientific fact about human warming of our planet within Catholic teachings, and the film shows Francis presenting it at an outdoor news conference, against giant projected backdrops of the world’s flora and fauna. The sequence carries all the pomp and circumstance—and optimism—of a man not yet convinced that humankind will keep collectively shrugging its way to environmental oblivion.

In America, however, the encyclical has fallen on deaf ears to many prominent Catholics in politics and industry who have no interest in admitting the role humans play in climate change, which is yet another sign that the true ideological divide in our country has little to do with religion. “I don’t get economic policy from my bishops or my cardinal or my Pope,” Jeb Bush declared during the 2016 campaign, before uttering this doozy of a signpost: “I think religion ought to be about making us better as people and less about things that end up getting in the political realm.”

And, of course, Francis’s intention to time the writings’ release to the Paris climate accords did little to keep President Trump from dropping out of them two years later out of spite. Trump isn’t Catholic, but one of the most widely shared “fake news” stories from the 2016 election touted a bogus Francis endorsement of him. So we can be reasonably certain that an awfully large number of American conservatives invested tremendous moral and political weight in the Pope’s name, even when attached to a man who could not have more clearly stood for the polar opposite of his beliefs.

The film’s decision to ignore these kinds of real-world reactions to Francis allows Wenders to make a show of taking the high road, but it also means the Pope’s words don’t land as hard as Wenders clearly wants them to. The further you get away from the Popemobile, the more he is ignored. In the last few weeks, for example, Francis and his US bishops condemned the Trump administration’s policy of separating immigrant children from their parents at the border, prompting ex-Trump Chief of Staff and (ostensibly) practicing Catholic Steve Bannon to snap, “They need illegal aliens to fill the churches.” Compassion versus hate, both at home in the same faith: This feels like the religious conversation we need to be having. For what is a dialogue about God today if you don’t talk about politics?

EVEN THOUGH Pope Francis is obviously a hagiography, it can be hard to deny its central principle: that this is a man whose heart is in the right place, who sincerely cares about the well-being of the planet, and who, for the moment, means what he says. Wenders believes that this level of dedication connects Francis to the namesake lineage he chose for himself, St. Francis of Assisi, the 12th- and 13th-century Italian friar who embraced a vow of poverty as a means of positioning himself closer to Jesus. And so Wenders stages some St. Francis sequences in black-and-white, silent-movie vignettes powered by a hand-crank camera that will strike some as cheesy but do carry a certain welcome austerity.

This is the first time in recent memory where “Is the Pope Catholic?” isn’t a joke but a serious philosophical inquiry, and one which Wenders leaves unresolved. But instead of proselytizing, the director offers a worldview that appears hopelessly naïve about how much his subject’s mere presence can accomplish. Francis does travel to Israel, where, like Popes John Paul II and Benedict before him, he delivers a speech at Yad Vashem obliquely atoning for Pius XII’s failure to intervene in the Holocaust. On the same trip he visits the region’s two walls: the Kotel, and the graffiti-strewn barrier separating Israel from Palestine. Wenders cannily frames Francis in echoing shots at both locations, creating a shared sanctity—both walls, after all, are symbols of destruction.

Like most of the Pope’s state visits, it’s a plea for peace with few real stakes: it costs him little and puts no one truly on the spot. But it’s also a gravely necessary gesture in 2018, at a moment when our own leaders—faith and otherwise—see only a new opportunity to throw gasoline on the fire and run. Francis’s gift for public relations allows him to see something they don’t, something that may not even have anything to do with the peace process: If ever a moment looked like the Day of Judgment, this is it.

Andrew Lapin is a film critic, reporter, and podcaster based near Detroit. He regularly reviews movies for NPR and has also written for Vulture, the New York Times, The Atlantic, the Washington Post, and Tablet.

Review
Who Needs Social Realism?
As the popularity of social realist cinema wanes, Ken Loach and the Dardenne brothers offer possible visions for the genre’s future.
Andrew Lapin
Sign up for our email newsletter, featuring exclusive original content
What’s good?
Signup for our weekly Shabbat Reading List for recs on what to read—and why.