What’s so funny about backstabbing, brutality and mass murder? Quite a lot. 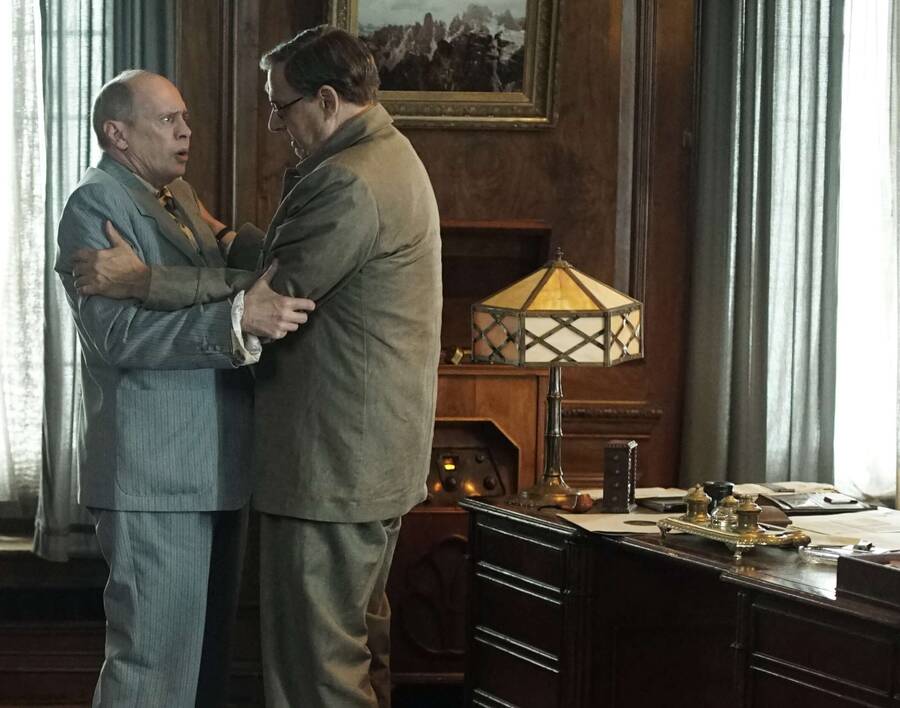 WHAT’S SO FUNNY about backstabbing, brutality and mass murder?

Armando Iannucci knows the disturbing answer is: Quite a lot. The brilliance of the director’s new pitch black historical comedy, The Death of Stalin, is that it encourages you to have an uproariously good time, while never letting you lose sight of the deeply uncomfortable fact that you are reveling in the antics of real historical figures who helped carry out monstrous crimes.

The film tells the story of the scramble for power and survival among the Soviet elite in the immediate aftermath of the death of the all-powerful dictator Joseph Stalin in March, 1953. After almost three decades of rule, Stalin maintained his iron grip on the Soviet empire and regime until the moment of his death, keeping even his closest subordinates in constant fear not just for their positions, but for their lives. In his latter years, he was more suspicious and dangerous than ever—plotting a new purge of the Politburo, inciting a wave of antisemitic persecution, and, according to some contemporaries and historians, contemplating the mass arrest and internment of Soviet Jews.

His sudden death granted a miraculous reprieve. Since he first fell ill on the date of Purim, some Jews around the world even compared Stalin’s timely demise to that of Haman. Whether or not it was divinely ordained, the dictator’s fatal stroke created a massive power vacuum that none of his potential successors could truly fill alone.

In the film, it’s obvious from the outset that Iannucci is not striving for historical accuracy in the strict sense—if he was, the all-star cast of non-Russian comedic actors would at least attempt to speak in bad Russian accents, instead of leaning hard into the cadences of English and American crime movies. Yet the the director is clearly striving to relate a broader truth about the moral and ideological bankruptcy of those exercising absolute power at the highest levels. Iannucci is not disguising tragedy as farce—he’s reminding us that in history, the two often go hand in hand.

The Death of Stalin takes aim at the general misconception that tyranny must be fundamentally serious, rooted in some kind of political worldview that is consistent and coherent, even if abhorrent. Instead, we see the leaders of a superpower driven exclusively by jealousy, vanity, ambition, and fear. This is what an authoritarian regime really looks like: a bunch of exhausted, suspicious old men scheming, joking, drinking, and scrapping for any edge over one another.

For an amateur Sovietophile and Kremlinologist, one of the great pleasures of The Death of Stalin is just seeing this motley crew of famous apparatchiks brought to life with gusto on the screen. Khrushchev, Beria, Molotov, Malenkov, Mikoyan—the gang’s all here (gang being the operative word). The film has more in common with a Scorsese-style gangster film or a Coen Brothers caper than it does with a traditional historical drama. As in Goodfellas, we’re entertained by the rapid-fire patter of high-strung criminals who mix playful carousing with brutality and display general indifference to the lives of those they crush along the way.

It’s no accident that the lead role of Soviet statesman Nikita Khrushchev goes to Steve Buscemi, an actor best-known for playing a series of mobsters and crooks in movies and shows like Reservoir Dogs, Fargo, The Sopranos and Boardwalk Empire. He captures the essence of Khrushchev as the ultimate political survivor—bluffing and cajoling as he attempts to ally with and outmaneuver his comrades. Meanwhile, Khrushchev’s primary rival, long-time secret police chief Lavrenti Beria, is a vicious dynamo, and our main window into the mass terror that this regime has made routine. In a few scenes, Beria schemes just outside the doors of basement interrogation cells, his lines punctuated by gunshots, beatings, and screams; we also learn that he uses his position to sexually abuse young girls.

Yet while Khrushchev is rendered somewhat sympathetically and Beria is an animal, it’s made crystal clear that there are no true good guys in this world and no simple dichotomies. In his efforts to gain popularity and the upper hand, Beria cynically pushes for an amnesty of political prisoners and takes steps to ease repression, leaving an irritated Khrushchev to plead that he is the real reformer. Iannucci is showing us that in this degenerated system, policy and ideology are just empty vessels used by the powerful to advance their own aims.

Beyond all of the dark laughs, there is a lesson for our own time in all of this. Revolted by Trump and his cronies, we console ourselves with the thought that while the great horrors of the 20th century were perpetrated by serious ideologues, the current occupants of the White House are too ridiculous, venal, or incompetent to pose such a threat. But The Death of Stalin is a reminder that in a world where morality and politics have lost meaning, and power is the only currency that matters, the petty greed and absurd escapades of everyday crooks can still do tremendous damage. We can laugh at the circus as much as we like. It won’t stop the clowns from dragging us all down with them.