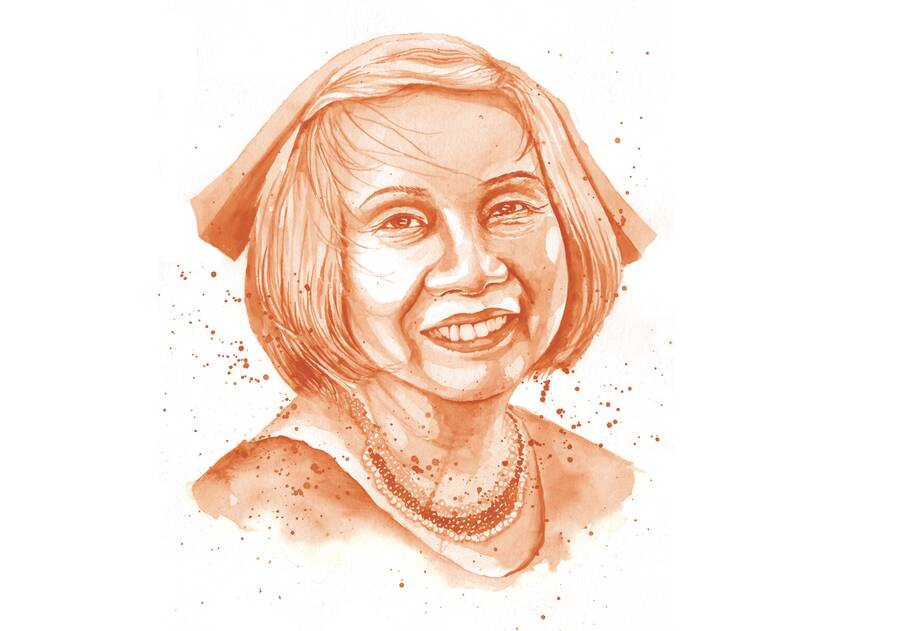 The Philippines, a nation in which most people have recent Indigenous ancestry, suffered under 400 years of Spanish and then American colonial rule. Today, 10% of Philippine nationals are employed as foreign workers around the world, including in the US and Israel. This puts contemporary Filipinx identity at the intersection of questions of diaspora, nationalism, and settler colonialism—questions that, as a Filipina Jew and a cultural organizer on the American Jewish left, I often encounter in a Jewish context as well.

Dr. Elenita (Leny) Strobel embodies and studies these questions and contradictions. Born and raised in the Philippines and currently living in Sonoma County, California, she refers to herself as both a “colonized” person and a “settler.” Leny has published several books on decolonization and Filipinx Indigenous spirituality, and is engaged in community-based organizing in support of Indigenous groups in the Philippines facing climate disaster and displacement. She is also the co-founder of the Center for Babaylan Studies (CfBS) in Sunnyvale, California. CfBS runs workshops, retreats, conferences, and cultural events to help Filipinx people in diaspora learn about their Indigenous culture and practice, connect with communities indigenous to North America, and ask critical questions about settler identity and decolonization.

While the term “decolonization” can refer to multiple anti-colonial theories and practices, in her book Coming Full Circle: The Process of Decolonization Among Post-1965 Filipino Americans, Leny defines it as “a psychological process that enables the colonized to understand and overcome the depths of alienation and marginalization caused by the psychic and epistemic violence of colonization.” She views this internally-focused definition as essential in the context of communal anti-colonialism; the personal process, she writes, “makes space for the recovery and healing of traumatic memory,” which “[leads] to different forms of activism.”

The connection to land plays an essential role in her writings on decolonization. We sat down to talk about how a diasporic subject can relate to land in liberatory, as opposed to fascistic, ways. What Leny describes resonates with doikayt, the Yiddish word for “hereness,” a way of rooting in place. For Leny, this practice of rootedness is inextricable from a commitment to the people indigenous to the land.

Arielle Korman: I’d like to talk about your relationship to nationalism and diaspora. If you’re a diasporic people, where is your homeland?

Leny Strobel: There’s a conversation in the Philippines about the importance of having a “pantayong pananaw”—an “us” perspective. My connection to that kind of nationalism is ambiguous right now, especially after being away for so long and not being in touch with what is happening there. And I’m meeting a lot of second- or third-generation Filipino folks in diaspora who have no connection to the homeland except as an idea, as a memory, and even that has been passed down from parents or grandparents who have been here for a long time, and who see the US as their home and the site of their resistance.

As someone consistently asking questions about what it means to be a settler, to be diasporic, to be Indigenous, it always comes back to the idea of land: What does it mean to be rooted in a place? So my work the last few years has focused on learning how to dwell in place, because this is where my body is, where my community is, where I’ve written and done my research.

AK: You’ve just used the word “settler,” and also the word “dwell.” Can you parse out what you mean when you say that?

Hence my decision to stay put and slow down, so I can devote time to getting to know the non-human beings that I live with—the creek, the redwood tree, the insects in my garden, the plants we grow. How do I relate to them as beings with their own right to exist? Coming from an academic background, I’m only just learning to practice those things, to experience what that means in my body and not just in my mind. I’ve been sitting by the creek, introducing myself to the creek, because the creek didn’t know me. Basso calls this “learning to dwell.”

AK: How can we differentiate a just connection to land from the fascist obsession with land?

LS: When I talk about land, I'm referring to the teachings of Indigenous peoples on Turtle Island [an Indigenous name for North America], which connect to the land not as a metaphor, but as a literal truth, where the emphasis is always on the interdependence and interconnectedness of all beings, human and non-human. If the earth is alive, then we must listen to and have a reciprocal relationship with all of creation.

A fascist framework connects to land not literally, but more as an idea—not land, but more like “space,” an idea of unboundedness. Connection became symbolic rather than literal, which led to the violent and often arbitrary way modern nation-states came into being.

One can and should, in the process of learning to dwell, acknowledge being settlers on Indigenous lands, and work with Indigenous peoples on how to question settler nationalism, how to acknowledge Indigenous sovereignty, how to compost the effect of the modern nation-state, which erased Indigenous nationhood while denying non-human beings their right to be. How would the land talk back if, as settlers, we began to consider these questions?

AK: So how do you suggest those on the left engage in decolonization?

LS: For me, this divide between right and left—while very real—is too dualistic. I’m seeing people who may not identify as “leftists” make some radical decisions: they take their kids out of school, they walk out of academia, they leave the corporate world. I’m hearing that the millennial generation doesn’t want to inherit all the stuff that their parents have accumulated, that they’re choosing to live more simply. People are inventing different ways of being “activists.” They find creative ways to express dissent. I’m reading adrienne maree brown’s Pleasure Activism now, which says that everything we do must come from love, that joy can be a site of resistance, and that this is one measure of decolonization. But that requires a deepening of your own spiritual practice. If a materialist framework doesn’t hold water anymore, where do you go? That’s where the spiritual enters—and when you’re in the Indigenous framework, of course, everything is sacred.

Arielle Korman is an educator and musician. She is a PhD student in Jewish studies at Columbia University and the co-founder of the Jews of Color Torah Academy.