For this week’s newsletter, we wanted to spotlight Michael Casper’s critical review of the ongoing Jonas Mekas exhibit at the Jewish Museum in New York, The Camera Was Always Running, along with two announcements: first, that we are accepting applications for our 2022 Jewish Currents fellowship, and second, that for the first time since the pandemic began, we will be hosting a party on May 3rd, located at Union Pool in Brooklyn (which has ample outdoor space), to celebrate the release of the Soviet Issue.

Also, a special note: Yesterday, we made a mock advertorial from the Soviet Issue available online. Written by n+1 Publisher and Co-Editor Mark Krotov, an old and dear friend with impeccable progressive politics, it was intended as a satire of various unfortunate contemporary publishing trends. But for some, the satire has been just a bit too convincing; despite our labeling it as “Humor” on the website, we continue to get angry responses from readers who imagine we would ever run ads by the Adelson Family Foundation. We would not, and furthermore, Kindling Media is not a real thing, and neither are any of the authors or books featured in the advertorial.

Speaking for myself, it’s both very funny and very sad that Mark’s fake books seem so plausible. (By the way, the Shabbat Reading List we released on April Fool’s Day three weeks ago? Yeah, those were all fake books too.) Anyway, please do not unsubscribe! And if you have, you can resubscribe here. 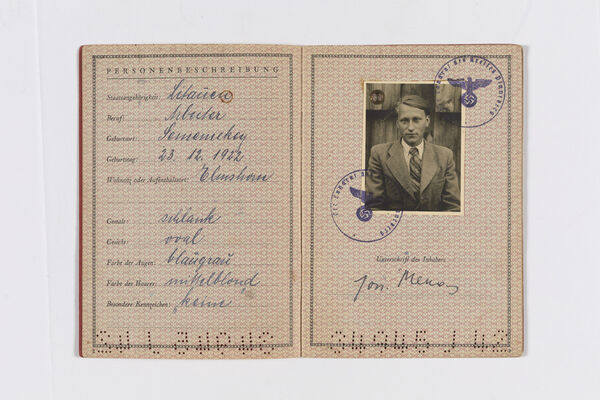 Temporary foreign passport of Jonas Mekas, issued by the German Third Reich, circa 1944.

Courtesy of the Estate of Jonas Mekas.

On June 16th, 2019, the ashes of filmmaker Jonas Mekas were buried under a traditionally carved wooden cross in a small Calvinist cemetery near the northern Lithuanian village where he was born in 1922. The same day as that secret ceremony, and just a few miles down the road, thousands of people from across Lithuania and around the world gathered for the public unveiling of a new memorial for the Jews murdered in Biržai, the small city where Mekas lived for several years during World War II. Under some light summer rain, attendees, including myself, walked silently along the path that over 2,000 Jews took in the summer of 1941, four kilometers from the site of the city’s wartime ghetto to the woods where they met a brutal end at the hands of German soldiers and local Lithuanians.

It was a striking juxtaposition. Mekas was often vague about the nature of his apparent proximity to the atrocities of mass murder, which he referenced several times and even said unfolded “before my eyes”—part of a larger pattern of obscuring and misrepresenting his experience of World War II that I had documented a year prior in the New York Review of Books. Best known as a central figure in the creation of independent cinema in the United States, Mekas was also a prolific poet, writer, diarist, and producer of experimental films that examined his life in fine-grained detail. After arriving in New York in 1949 with his brother Adolfas, he became a fixture of the downtown art scene, co-founding Film Culture magazine (1954), the New American Cinema Group and Film-Makers’ Coop (1961), and Anthology Film Archives (1970). Mekas was a pioneer of the “diary film” genre, and his iconic productions, such as Walden: Diaries, Notes, and Sketches (1969), Reminiscences of a Journey to Lithuania (1972), and Lost, Lost, Lost (1976), trace his life story from the Lithuanian countryside to postwar displacement in epic collages of narrated fragments. These works, for all their impressionistic beauty, are just as remarkable for what they leave out: Mekas’s participation in an underground movement in Biržai that supported the 1941 Nazi invasion of Soviet Lithuania and, when the movement went above ground, his role in running two ultranationalist and Nazi propaganda newspapers, until he fled Lithuania in 1944.

These omissions are especially noteworthy because Mekas often has been upheld as a moral voice and witness of the war. As critic Amy Taubin wrote in 2017 in a piece for documenta, the German art fair founded in 1955 as a way to move past Nazi aesthetics, Mekas’s work was significant because of “his desire to bear witness—to record daily life, not only so that he would remember but so that history would take notice.” The art world at large remains deeply invested in the story of Mekas the anti-Nazi. After my article came out in 2018, “the wagons started circling immediately to protect a sacred figure of the avant-garde,” as Film Quarterly editor B. Ruby Rich put it in an editorial. Art critic Barry Schwabsky likened me to “an operative of Trump’s ICE” while a similarly dyspeptic Lithuanian podcaster suggested I was an agent of the Kremlin. Mekas, a Trump supporter, called it “fake news.” And despite the availability of a record that troubles Mekas’s own telling of his history, over the past few years, numerous museums, galleries, magazines, festivals, and cinemas across the world (including a gallery in Tel Aviv) have featured his films alongside highly sanitized versions of his life story, usually with sponsorship from the Lithuanian government and the permission of his family-run estate, which affords the access to Mekas’s materials. In these tellings, a contradiction takes shape: Mekas’s wartime experience is glossed over even as it is presented as the source of his authority.

Click here to read the rest of the review! 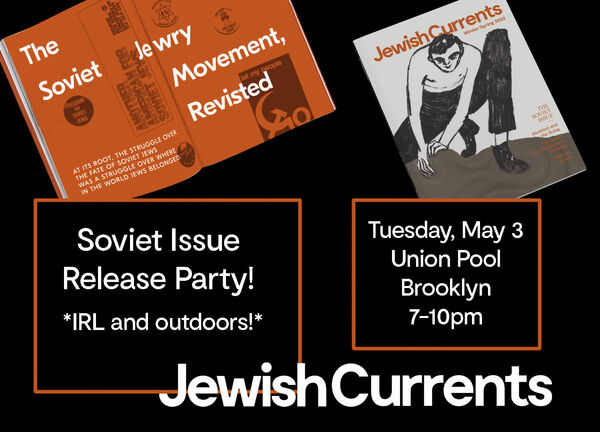 We’ve missed you! Come celebrate the release of our Winter/Spring 2022 double-issue dedicated to Soviet Jewry! Mingle with fellow Jewish Currents lovers outdoors in the backyard at Union Pool in Williamsburg, Brooklyn.

Let us know if you’re planning to come by registering here.

Union Pool is a fully handicap accessible venue. Vaccination against Covid-19 and testing beforehand are strongly encouraged. If you have accommodation requests or questions about accessibility, please reach out to events@jewishcurrents.org.