A 1918 dispatch from a Yiddish newspaper documents the experiences of women legally voting for the first time.

Miriam Karpilove Translated from the Yiddish by Jessica Kirzane
June 4, 2019 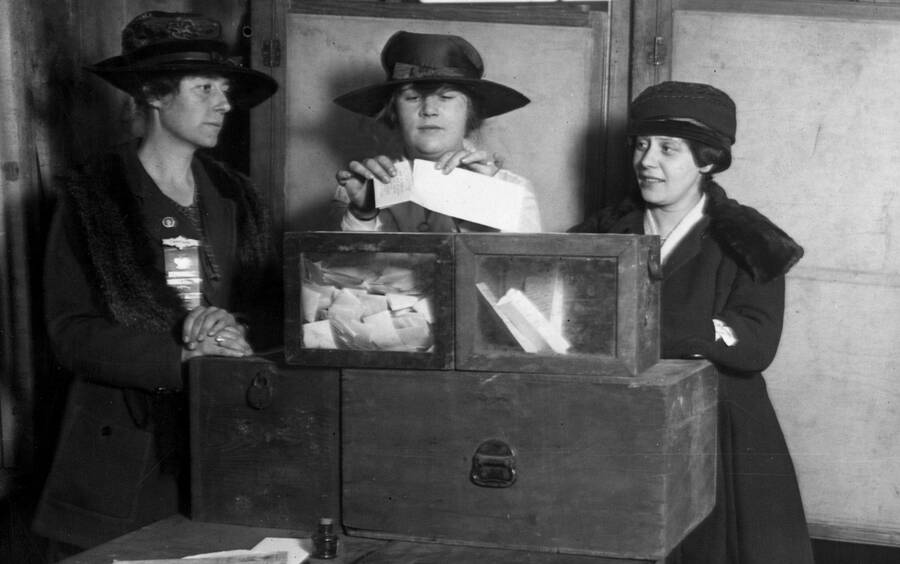 Introduction and translation from the Yiddish by Jessica Kirzane.

ONE HUNDRED YEARS AGO TODAY, on June 4th, 1919, Congress passed the 19th Amendment to the Constitution, guaranteeing all American women the right to vote—a right they could begin to exercise after the amendment was ratified on August 18th, 1920. But what was voting like in that early period? Below, Miriam Karpilove’s firsthand account of women voting in New York in 1918, when the right had been won locally but not yet nationally, offers a window into the awkward, embarrassing, and emboldening experience of voting as a woman in these early years.

Karpilove (1888-1956) was a prolific Yiddish writer and editor. She was born in Minsk, the fifth of ten children, and arrived in America in 1905. She settled first in Harlem, later in the Seagate neighborhood of Brooklyn, and ultimately in Bridgeport, Connecticut, where several of her brothers lived. She was among the very few women who made their living primarily as Yiddish writers (she supplemented her income working as a retoucher, hand coloring photographs). She wrote hundreds of short stories, belles-lettres, plays, and novels, and served as a staff writer for The Forward in the 1930s.

She was also a frequent contributor to the women’s pages of several leading Yiddish newspapers—sections devoted to covering political and economic subjects as they related to women’s lives. In her writing for these pages, Karpilove often inserted herself (and her wry sense of humor) into her journalistic reporting. Her articles provide intimate portraits of pivotal historical moments and day-to-day life: Jews in Detroit assembling to honor those among their ranks who had joined the Jewish Legion of the British Army and entered World War I on the heels of the Balfour Declaration; Chicago Yiddishists gathering to honor visiting New York Yiddish literati; observations about the shops and fashion of Division Street in New York City.

In this article, originally published in the Yiddish newspaper Di varhayt, Karpilove covers the first election in New York City in which women were legally permitted to vote. In November 1917, women won that right in the state of New York. Women in New York City had their first opportunity to exercise it on March 5th, 1918, when citizens of several districts voted to fill vacancies left by Congressional representatives who had resigned. Although Karpilove doesn’t say so in the article, this was a pivotal election, coming on the heels of Germany’s resumption of unrestricted submarine warfare against the British, at a time when public opinion in the US was shifting toward support for entering World War I. A Democratic win in the special elections could (and did) flip the House of Representatives, giving Woodrow Wilson the votes he needed to enter the war.

The New York Times reported that 35,205 women were registered to vote in this election, about a fourth of those eligible. Other articles in The New York Times that year anxiously speculated about how the women's vote might sway the election. Suffragist groups worked to obtain women to act as watchers (or "hostesses") at polling places to, as one article explained, “make it easier for women voters who otherwise might be embarrassed about casting their ballots for the first time."

In her article, Karpilove strolls into a polling place to talk to one such “hostess” and learn about her experiences, and to watch men’s reactions to women voting. She is both critical of and flippant about men harassing women at the polling place and brash in the face of men who question her right to be there. Her assertiveness also extends to her behavior toward women: there is a subtle wink toward homoerotic attraction as she assesses and admires a woman she’s speaking to when she notes that the man who inappropriately flirted with her “wasn’t wrong” in his taste in women.

Karpilove’s article begins with women’s right to vote, but it’s about much more than that. It concerns, more broadly, women’s right to be assertive, to take up space in public, and even to look down on men who behave inappropriately. It’s a public performance of exactly the kind of bold feminine voice that the men she depicts in this piece were afraid might emerge out of women’s suffrage.

Who knows how long it will take for people to get used to women’s suffrage. In the meantime, it’s big news and no one knows whether to take it seriously or as a joke.

You should hear the tone men took as they chatted about women’s suffrage while monitoring the voting booths.

One member of the committee said, “It’s remarkable how earnestly they come out to vote. They take much more interest in it than the men do.”

Another replied, “That’s just because the men don’t take a special election very seriously: only four congressmen to choose from to replace those who resigned. And among them not a single new candidate.”

“Even so, they come. And they’re the first to arrive!” exclaimed the first, with apparent alarm at the idea that the women might, in an unladylike fashion, surpass the men.

There was one woman among the committee of men. She wore a socialist badge and sat watching the voters intensely. She especially watched the women voters. She was so busy watching that she wasn’t at all interested in speaking to an outside person.

So I turned my attention to another woman at another polling booth instead. I wanted to talk to her to learn more about the political movement.

“What do you think of those men over there, those eight or nine committee men, those politicians?” she asked me.

“What else is there do say? They look festive. Cheerful. Is it because women have the right to vote?”

“That’s it. And that’s why they’re—not all of them—more than a little drunk.”

“And one of them already came up to me and asked me to marry him.”

“Was he serious? Which one was he?”

“He’s not there anymore. If he comes back I’ll point him out to you. What an insult!”

“An insult like that is usually meant as a compliment.” I looked over the woman on the receiving end of this offense and I must say that, whatever he meant by it, he had very good taste.

She looked at me with her pretty Jewish eyes, gave a charming smile and asked if I meant what I said.

“Of course I meant it,” I answered seriously. Very seriously.

She was pleased. Like a child eager to show something off, she brandished her badge from the Socialist Party for me. I asked her why she wasn’t wearing it, like the woman sitting at the other poll with the badge on her lapel.

“Should I? I’m a little embarrassed,” she answered.

“There’s nothing to be embarrassed about. You could even be proud of it.”

She put it on, but she didn’t wear it for long. One of the male clerks approached and told her to remove it. “You’re not supposed to wear badges here. Take that badge off!”

She looked at me sheepishly, as though begging my forgiveness and approval.

“Hold the door wide open—a lady is coming to vote!” one of the committee members who stood by the door called out, jokingly. The others laughed.

A lady, and then another, and then a third, and even more, entered to cast their votes. They held themselves unobtrusively, as though they wanted to get it over with quickly and without much notice. The men’s attention flustered them.

As sudden as a snowstorm, a petite woman with a small voice broke away from the group, with all of the laughing glances of the crowd following her. She covered her face in her hands and shuddered, crying “Oh, I could just die!” and ran away.

All of the men, including policemen, practically fell on the floor laughing. They were very pleased with her foolish behavior; they could form opinions about all women based on her.

A little later, after a few other women came in and voted, composed and self-assured about what they were doing, the same skittish woman returned. She all but smuggled herself inside, adjusted her little red cap over her flowing hair and stole into one of the curtained booths to get a form for the candidates running for Congress. She filled it out, cast it into the ballot box and dashed with a dancing step out of the building and into the street.

“Some woman!” the officials commented as they watched her go.

They must have had a different impression of the others who came in after that clownish girl. One of them was an older woman with white, aristocratically coiffed hair, in a tailor-made suit, who carried herself with exceptional dignity.

One of the committee members, who wanted to show off to the others that he knew her, asked her familiarly if she really wanted to vote.

She nodded to indicate her certainty.

“For whom?” he asked, jokingly.

“For the best man,” she answered, her wise eyes smiling at him ironically. The rest knew they wouldn’t easily be making fun of women voters in her presence.

A new member joined the committee. He had a figure like a round barrel on two long wooden slabs. “Are you having a nice sit?” he asked the single committeewoman with a sparkle in his eye.

That must be the man who proposed to her earlier, I thought and the girl confirmed my suspicions.

“And he’s inquisitive,” she added.

Then the man I had just told her to make fun of approached me. He wanted to know where my credentials were and how I could be there without a credential.

“I’ve already been sitting here for a whole hour without a credential,” I told him. “That’s a sure sign that I can.”

He asked what I could show him if not a credential to prove that I could be there.

“Where is the card?”

“I gave it to one of the committee members.”

“You only allow fools here?”

I turned away from him and said goodbye to the single woman voting official and to the policeman. I expressed my hope that someday they’ll be powerful enough to allow ladies to come in freely; then “gentlemen” like this one will have to find somewhere else to go.

It was more or less the same in all the other polls I visited. The women came in to vote and the men looked at them not knowing if they should laugh or be afraid that the women will eventually, in time, get better at it than them, and use their power to win rights.

History
The Best Place in the World for Soviet Jews
The Soviet Jewry Movement exposed a rift between Israel and the US that persists to this day.
Jonathan Dekel-Chen
History
The Other Soviet Jewish Dissidents
A circle of activists known as pravozashchitniki, who advanced a universalist argument for Soviet human rights, have been largely erased from Jewish communal memory.
Emily Tamkin

Essay
Bela’s Pilgrim
The story of my salvation
Bela Shayevich
Report
Deborah Lipstadt vs. “The Oldest Hatred”
In her new role as antisemitism envoy, Deborah Lipstadt will attempt to fight a scourge of antisemitism that she seems to regard as incurable.
Mari Cohen
Sign up for our email newsletter, featuring exclusive original content