Bolsonaro’s Holocaust revisionism is no big deal for Israel’s leader. 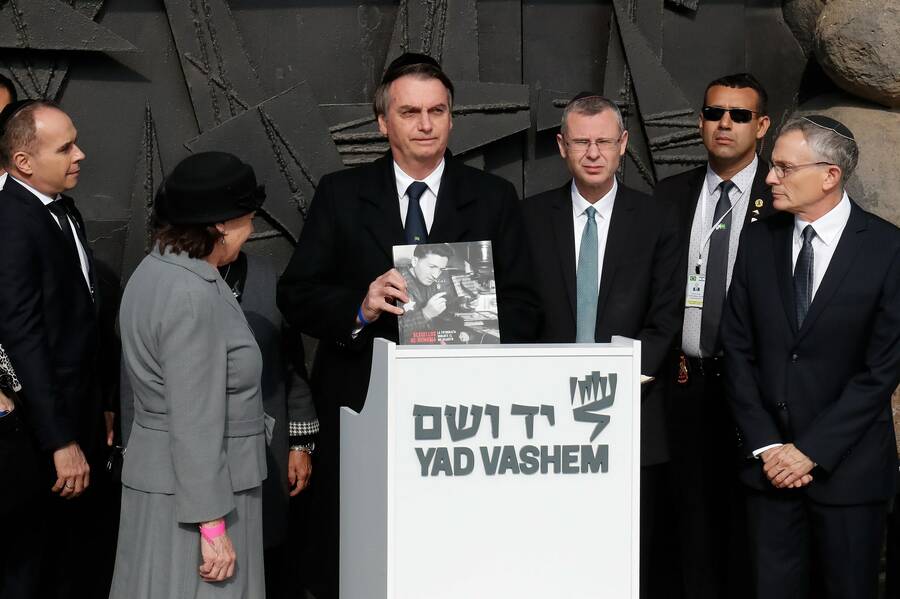 EARLIER THIS MONTH, far-right Brazilian President Jair Bolsonaro visited Israel, both to strengthen ties with the country and as a courtesy to Prime Minister Benjamin Netanyahu, whom Bolsonaro admires and has said he considers to be a “brother.”

On his agenda were visits to Yad Vashem and the Wailing Wall, meetings with Brazilians living in the country (an event that was later canceled due to security concerns) and talks on the possible transfer of the Brazilian embassy from Tel Aviv to Jerusalem. The trip included many controversies, but the biggest was reserved for Bolsonaro’s visit to Israel’s Holocaust museum, Yad Vashem.

Just before the visit, on March 30th, Brazilian Foreign Minister Ernesto Araújo wrote on his blog that Nazism is a “leftist phenomenon.” “We can easily see that Nazism had fundamental traits that recommend classifying it on the left side of the political spectrum,” wrote Araújo. “Nazism was anti-capitalist, anti-religious, collectivist, contrary to individual freedom, promoted censorship and control of thought by propaganda and brainwashing, contrary to the traditional structures of society. All this characterizes it as a left-wing movement.”

Several Brazilian and German historians immediately criticized the minister’s statements, affirming that there is no doubt that Nazism is an extreme right-wing movement that rejects democracy and human rights and defends social hierarchies. They pointed out that the Nazi Party quickly aligned itself with other right-wing forces during the Weimar Republic, and that the use of the term “socialist” was merely a publicity stunt to attract the vote of workers. In fact, business interests welcomed Nazism and they worked well together.

None of Araújo’s comments should have been surprising. Back in 2018, Araújo, then a low-level official in the Ministry of Foreign Affairs, blogged about the same ahistorical theory amid a wave of Brazilians repeating similar theories on social networks. It all started with a video shared on Twitter by the German Embassy in Brazil that identified Nazism as a right-wing movement. At the time, the German ambassador to Brazil, Georg Witschel, said it was “complete nonsense” to argue that Nazism was a left-wing movement.

In an interview with the Folha de São Paulo newspaper during Bolsonaro’s visit to Israel on April 2nd, Araújo doubled down on his theory that Nazism was a leftist movement, stating “many times, the association of Nazism with the right was used to denigrate movements that are considered right wing and that have nothing to do with Nazism. I want people to study, to read the story from a deeper perspective.”

On the same day, during his visit to Yad Vashem, Bolsonaro was asked about his chancellor’s theory and replied that “there is no doubt” that Nazism is a leftist movement and ideology. “Socialist Party,” he said, “isn’t it? National Socialist Party of Germany.” In fact, the website of Yad Vashem itself states that the Nazi Party originated from radical right-wing groups.

These statements from Bolsonaro and his chancellor were immediately repudiated by intellectuals and religious leaders who considered them antisemitic and dangerous to the Jewish people.

From Brazil, the Jewish Collective for Democracy, which emerged during the 2018 presidential elections to oppose Bolsonaro’s candidacy, told Jewish Currents that Bolsonaro’s remark is “a lie, dangerous, and one more strategy to polemicize and make the media waste energy with a discussion that says nothing about the work he should be doing.” (All quotes in this article attributed to the Collective are the result of deliberation and consensus by the group’s members.)

“To declare that Nazism would be a left-wing movement is historical revisionism,” says the Collective. “In the case of Bolsonaro it is a clear attempt to demonize the left. It is important to remember that the first victims of Nazism were the communists, persecuted and imprisoned for their ideology, and that the very rise of National Socialism occurred because of fear of communism.”

“History cannot be modified according to our ideologies,” the Collective added. “This [declaration of Bolsonaro] is an insult to the dead Jews and to the academy itself that has been working on the subject for decades.”

Bolsonaro’s political trajectory is marked by his proximity to fascist and neo-Nazi groups. In 2011, when he began to gain national fame by appearing in several sensationalist television programs preaching hatred against minorities, Bolsonaro—who made his political career in the state of Rio de Janeiro—was honored by a small group of supporters on the main avenue of São Paulo. The group was mainly composed of members of Carecas do ABC (ABC skinheads) and a series of small and violent neo-Nazi groups, such as the Kombat RAC (Rock Against Communism), Ultra Defesa (Ultra Defense), and União Nacionalista (Nationalist Union). The demonstration had been convened on Stormfront, the internationally influential online white power forum.

In 2016, Bolsonaro posed for photos alongside a man who was dressed as Adolf Hitler. This man, Professor Marco Antonio, a member of a far-right group that had defended torture under Brazil’s military dictatorship, also received financial support from Flavio Bolsonaro, another son of the future president, for his failed campaign for City Council in Rio de Janeiro.

During last year’s presidential election, Jair Bolsonaro received the support of a number of right-wing and far-right groups, including a fringe group known as Integralistas, a fascist movement founded in Brazil in the 1930s.

To the Jewish Collective for Democracy, Bolsonaro’s proximity to neo-Nazi groups, as well as his numerous racist statements, puts all minorities at risk. “The Jewish community, specifically, may not suffer now, but the encouragement of extremism and hate speech certainly increases the number of attacks on any group that is qualified as undesirable,” they say, adding that Bolsonaro “has already stated that Brazil is a Christian country, and has demonstrated total ignorance of Judaism by saying that Jews are Christians, and that minorities must bow down or disappear.”

The Collective’s fears have been borne out by recent events. They point to the destruction of places of worship belonging to religions of African origin by Evangelical fundamentalists whose main churches supported Bolsonaro’s election. “There is no way to be sure of future actions, which may be against Jews, but we cannot ignore what has been happening with other groups,” they say.

The Brazilian Jewish community has been divided over Bolsonaro. In April 2017, he was invited to speak at the Clube Hebraica (Hebrew Club), an important Jewish social organization in São Paulo. There, in front of an audience of about 500 people, he made prejudicial assertions against black people, LGBT people, women, refugees, and members of NGOs. He also argued that all Brazilians should carry weapons as a way to combat crime—one of his main campaign promises, which has already been the subject of a decree facilitating the purchase and possession of weapons.

Many of those present applauded Bolsonaro’s words. Meanwhile, outside the venue, around 150 people, most of them members of the Jewish community, protested his speech. Other dissenters included the Israeli Confederation of Brazil (Conib), a non-profit that acts as a body of representation and political coordination for the Brazilian Jewish community, and Rabbi Nilton Bonder, of the Jewish Congregation of Brazil (CJB), which criticized the event.

To the Collective, “Bolsonaro’s connection to Israel, as well as an uncritical defense of the actions of the Netanyahu government, involves an imaginary Israel [based on] beliefs and images created by Evangelical neo-Pentecostal sects. Bolsonaro does not seek to know cultures or thoughts beyond his own; his visit and support to Israel do not involve respect for Jewish history and culture, but rather the interests of other groups, which [make up] his electoral base.”

Brazil’s embassy will remain in Tel Aviv, for now. However, during his visit, Bolsonaro decided to open a trade office in Jerusalem, a move which was well received by Israeli leaders and which caused anger among Arab and Palestinian leaders. The Palestinian Authority recalled its ambassador in Brazil for consultations and accused the Brazilian government of “flagrant violation” of international legitimacy and an “aggression” against the Palestinian people and their rights.

This is, in some ways, inconsistent with the history of Brazilian policy toward Palestine. Brazil has recognized the Palestine Liberation Organization (now the Palestinian Authority) since 1975 as “the legitimate representative of the Palestinian people,” within the pre-1967 borders of the West Bank and Gaza. In 1993, Brazil opened the Special Palestine Delegation, which has acted as the equivalent of an embassy since 1998. Brazil recognized Palestine as a sovereign state in 2010.

Even Hamas, considered a terrorist group by Israel and the US, issued a note criticizing Bolsonaro’s visit to the Wailing Wall. The group stated that Bolsonaro “not only contradicts the historical attitude of the Brazilian people, who support the Palestinian people’s struggle for freedom against the occupation, but also violates international laws and norms.”

It is not yet known what possible gains Brazil expects from a strategic alliance with Israel, but some losses are already plain, such as the fracture created within the Brazilian Jewish community and the shaking of Brazil’s relations with the Palestinian Authority. Moreover, Brazil is compromising its historic position of diplomatic independence, automatically aligning itself with US interests in the Middle East and becoming part of an informal alliance of right-wing populist governments with serious democratic problems, such as Hungary and Israel itself.

For Israel, however, it’s a win-win.