At its flagship conference, AIPAC has embraced partisan Israel politics. 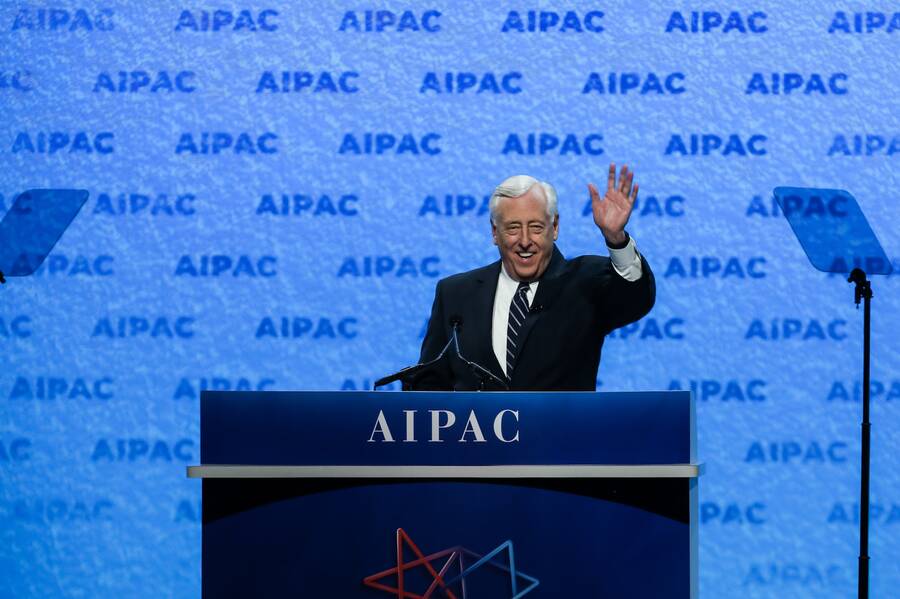 AIPAC’S POLICY CONFERENCE has always been a useful reminder that bipartisan politics can harbor extremism just as noxious as the fringes. Last year, Senate Minority Leader Chuck Schumer told the assembled crowd that the reason Palestinians do not want peace is because “they don't believe in the Torah.” This year, Rep. Steny Hoyer, the number two Democrat in the House, one-upped Schumer. Hoyer’s remarks directly targeted critics of the Israeli government in his own party with the phony machismo of someone picking a fight at a 7-11: "When someone accuses American supporters of dual loyalty, I say: accuse me.”

He can consider himself so accused. AIPAC’s Policy Conference, this year more than any other in recent memory, reflects the partisan nature that now defines the issue of Israel/Palestine in American political life. Hardcore backers of the Israeli government and of lockstep American support for Israel—Christian Zionists, allies of Saudi Arabia and the United Arab Emirates, weapons manufacturers, and powerful individual donors like Sheldon Adelson—are now an essential component of the Republican base. The Democratic electorate and Congressional rank-and-file, meanwhile, has drifted further in the other direction. Numerous 2020 candidates defended Ilhan Omar during the tedious “antisemitism” scandal of the last month, and all but one (Cory Booker) are skipping this year’s Policy Conference.

AIPAC has always stressed its bipartisan nature, a key element of the Israel lobby’s strategy to effectively oxygenate American support for the Israeli government—to make it omnipresent and unquestioned. But the Democratic leaders who’ve chosen to speak at the event this year—Hoyer and Nancy Pelosi, most significantly—do not reflect real bipartisan buy-in to what the Israel lobby is selling so much as they represent the inability of the Democrats’ ossified leadership, still aligned with brutal Israeli leaders and their American boosters, to come to terms with the party’s emboldened left wing.

The catalyst for all this, of course, has been the rapid deterioration of the facade of liberal Israeli democracy. Though some commentators point to Netanyahu’s multiple corruption and fraud indictments as a symbol of Israel’s healthy institutions, this is a laughably thin defense. The truth is more straightforward. Confronted with a challenge from the center-right led by a group of former generals, Netanyahu has formed an alliance with once-outlawed ultranationalists who are open about their intention to expel and endlessly dominate the lives millions of Palestinians. It’s a lurch to the right that fits in perfectly with the ascendance of antisemitic far-right movements in Europe, with which Netanyahu has formed close ties. These are not qualities of a strong liberal democracy.

While Ilhan Omar, Bernie Sanders, and Rashida Tlaib have made pointed critiques of the Israeli occupation and the Israel lobby’s influence in Congress, it is Netanyahu’s brand of distasteful politics that has pushed Democrats over the edge. Even Beto O’Rourke, American centrists’ favorite political son, took the time last week to denounce Netanyahu for having “openly sided with racists.”

As the Israeli right is blossoming into a straight-up neofascist movement, AIPAC’s priority remains policing Democratic politics. The wider Israel lobby has gotten virtually everything it could have ever wanted under both the Obama and Trump administrations—an embassy move to Jerusalem, recognition of the Golan Heights as Israeli sovereign territory, $38 billion in military aid, and the attempted revocation of the Iran nuclear deal—but the most essential cog in the Israel lobby’s machine, AIPAC, now has to get its hands dirty in new ways to keep the lobby  in the driver’s seat of American policy toward Israel. This requires dispensing with the guise of anti-partisan politics it has kept up for so many years.

At this year’s Policy Conference, AIPAC is giving prime real estate to promote the launch of Pro-Israel America, a new political group stocked with ex-AIPAC staffers with the express goal of targeting Democratic critics of Israel in the 2020 election cycle. Where in the past AIPAC would have worked solely through its large and opaque network of large-dollar donors, there is a new urgency around finding ways to keep meaningfully progressive insurgents from acquiring more power in the Democratic Party. The progressive political action group MoveOn.org, which organized the successful #SkipAIPAC campaign, cited a survey saying that 74% of its members wanted the 2020 Democratic candidates to bail on the conference. Other surveys, like an oft-cited Pew poll of American voters last year that showed a widening partisan gap over support for Israel, have already indicated the same kind of change that’s pushing AIPAC into newly partisan territory.

Tragically, AIPAC might be able to deflect some of the Democratic discomfort with the Netanyahu government as a new round of violence breaks out. Rockets from Gaza struck central Israel on Monday, and Netanyahu has canceled his AIPAC appearance as he mobilizes IDF reserves for a military attack. Ahead of a tight election against respected military leaders, a bloody assault on Gaza could lift Netanyahu’s poll numbers while forcing another round of statements about Israel’s right to defend itself from Democratic politicians fearful of being painted as soft on terrorism.

But as recent months have shown, Israel’s American backing block is beginning to show signs of weakness. Left-wing pressure is changing the discussion, and it has the potential to change policy. This has forced AIPAC into the uncomfortable position of revealing who it really represents, and who its friends really are.

Report
Progressives Introduce Legislation to Force US Investigation into Israel’s Killing of Shireen Abu Akleh
The amendment comes after the State Department released a waffling statement on the death of the Palestinian American journalist.
Alex Kane
Report
Progressive Lawmakers Demand Stop to Israeli “War Crime” in Masafer Yatta
In a letter to the Secretary of State, 15 House Democrats urged the administration to intervene against the expulsion of Palestinians from West Bank villages.
Isaac Scher