Letters to the Editor: Antisemitism Uptick and Organizing Jews

Readers respond to web content published in May, including an article analyzing antisemitism statistics and an audio conversation on organizing American Jews. 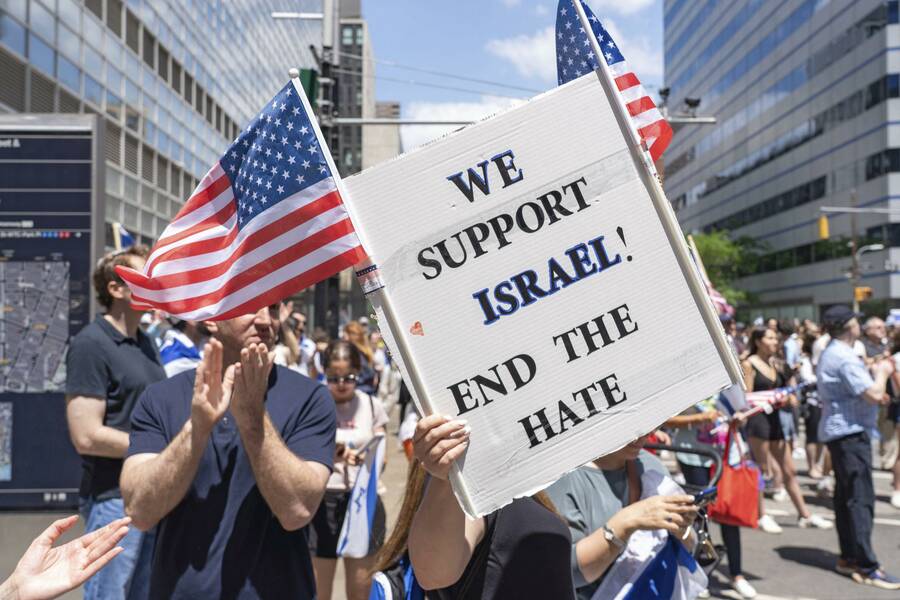 Pro-Israel protesters gather at the World Trade Center site in the wake of a reported spike in antisemitism in the US. Photo: Ron Adar/SOPA Images/Sipa USA via AP Images
Tweet Copy Link Email Print

The following letters were received regarding web content published in May, including the article “A Closer Look at the ‘Uptick’ in Antisemitism,” which analyzed antisemitism statistics provided by the Anti-Defamation League (ADL), and the audio conversation “Organizing Jews and How to Talk to Your Family,” in which members of Jewish Currents staff debated the merits of organizing to shift American Jewish opinion on Israel/Palestine.

On “A Closer Look at the ‘Uptick’ in Antisemitism”

Mari Cohen’s  “A Closer Look at the ‘Uptick’ in Antisemitism” claims that hate crime data put out by the ADL are inaccurate and are likely to be “weaponized” by pro-Israel groups. While the latter concern is credible insofar as any dataset can be used for political ends, the former is misleading. This dataset’s supposed absence of evidence of a spike in hate crimes does not mean there is an absence of evidence of a spike writ large.

If any single dataset is flawed, we must rely on an agglomeration of resources to capture trends. Individual states, municipalities, and agencies maintain datasets that all tell us that Jews are victims of hate crimes at high and disproportionate rates. This has been true since authorities in the US started collecting hate crime data in the 1980s and 90s.

Qualitative data are also meaningful when we think that a quantitative dataset like the ADL’s might be incomplete or biased. For example, news reports tell us that Haredi Jews have been beaten over the past weeks by aggressors claiming to support the Palestinian cause. (Ironically, many Haredi Jews are anti-Zionist because they do not think that we live in the messianic age.) For example, my friend’s friend recently landed in the hospital after being attacked by at least seven men in midtown Manhattan. Other narratives never make it to the mainstream, but get written up in offline broadsheets or shared by word-of-mouth.

My scholarly research suggests that we lack good quantitative data on violence against any marginalized group. That’s not a reason to draw the opposite conclusion from what the data imply. And paying attention to a broader base of quantitative and qualitative reports might draw attention away from those who would weaponize data for bad ends.

The letter writer is a PhD student in American politics and quantitative methods at Yale University.

We read “A Closer Look at the ‘Uptick’ in Antisemitism” with great interest, as it reflects trends in the UK, where claims that criticisms of Israel or the political ideology of Zionism are themselves antisemitic are spreading and being taken up by the UK government and universities. The Community Security Trust (CST)—the ADL’s counterpart in the UK, responsible for the widely cited statistic that antisemitic incidents increased 500% as Israel and Hamas exchanged fire—has, like the ADL, historically reported speech critical of Israel as antisemitism. We’ve watched this play out where we teach at the University of Warwick.

In November 2019, one of us (Dr. Osuri) made a comment in class about pro-Israel advocacy groups. She was discussing transnational networks and cited the example of pro-Israel organizations smearing the Jeremy-Corbyn-led Labour Party. She never referred to Jews in any denigrative or conspiratorial manner. Nonetheless, a student society launched a full-scale media smear campaign and attempted to damage her reputation and her career. The campaign was part of a strategy to pressure the university to adopt the controversial International Holocaust Remembrance Alliance (IHRA) working definition of antisemitism (seven of its examples reference criticism of Israel as antisemitism).

Even though a university investigation found her speech to be lawful, and within the bounds of free speech (i.e., not hate speech), an ensuing smear campaign has ensured that UK media and members of UK Parliament repeatedly describe her comments as antisemitic. The December 2020 Campus Antisemitism Report produced by the CST featured her as an antisemite and the University of Warwick as an example of bad practice in tackling antisemitism. The CST indeed works closely with the pro-Israel Union of Jewish Students and UK Lawyers for Israel, whose objectives include “creating a supportive climate of opinion in the United Kingdom towards Israel.” Currently, any criticism of Israel or Zionism is being used to initiate investigations and to smear academic reputations. On April 27th, Tory Member of Parliament Jonathan Gullis called for the sacking of Dr. Osuri, her Head of Department, and even Warwick’s Vice Chancellor.

The letter writers are associate professors at the University of Warwick.

On “Organizing Jews and How to Talk to Your Family”

In the opening of your recent conversation “Organizing Jews and How to Talk to Your Family,” Jacob Plitman and Joshua Leifer discuss the merits, strategy, and viability of anti-Zionist Jewishness. In essence they ask: Is Jewish anti-Zionism possible, or has Zionism completely subsumed Jewish identity? And, is it wrong to “focus on saving Judaism” rather than “ending the forced transfer of Palestinians” as a primary goal?

As anti-Zionist Jewish cultural organizers deeply invested in organizing in solidarity with Palestinians, we say, to the first point: Yes, it is absolutely possible to create Judaism and Jewish culture beyond Zionism. In fact, it already exists. Jewishness, as the editors of Jewish Currents know, existed for centuries before the beginning of the Zionist political project, and anti-Zionist Jewishness has always existed alongside Zionism. Yes, Zionism has become dominant in American Jewish life, but it is a recent development. In the current moment, Jewish anti-Zionism is flowering in its own right, with creative expressions that go beyond a simple countering of Zionist hegemony. In the coming years, we will only see more and more anti-Zionist Jewish culture and community.

As to whether it is acceptable to try to create anti-Zionist Judaism when Palestinians are threatened with ethnic cleansing, we say: This is not an either/or. We can, in no uncertain terms, endorse and organize around the demands of the BDS call for right of return, equal rights, and an end to the occupation, and create vibrant Jewish anti-Zionist communities. Many of us have been doing exactly this for decades, and we are grateful for the ever-growing communities where this is the norm.

Alongside denying and erasing Palestinian histories and cultures, Zionism’s cultural project attempts to assimilate Jews into a flattened, Ashkenazi-dominant, hegemonic culture: destroying Jewish languages and erasing Jewish histories from across the diaspora that don’t fit the Zionist narrative. This has particularly harmful impacts on the lives of Mizrahi, Sephardi, and Ethopian Jews, and Jewish people of color in the US. We must push against this erasure, both because it is violent in and of itself, and because it is inseparable from the colonial project displacing Palestinians.

Finally, organizing is just better when people are rooted in their cultures, traditions, and histories. It is more attractive, sustaining, and community building. When we organize rooted in traditions and cultures, we are more likely to win. We believe culture is key to anti-imperialist and anti-capitalist work. As contributors and editors of Jewish Currents, you are currently stewarding a major pole of leftist Jewish culture. As such, we hope you believe creating anti-Zionist Jewish culture is possible, and worth it.