A representative letter to Peter Beinart, and Beinart’s response 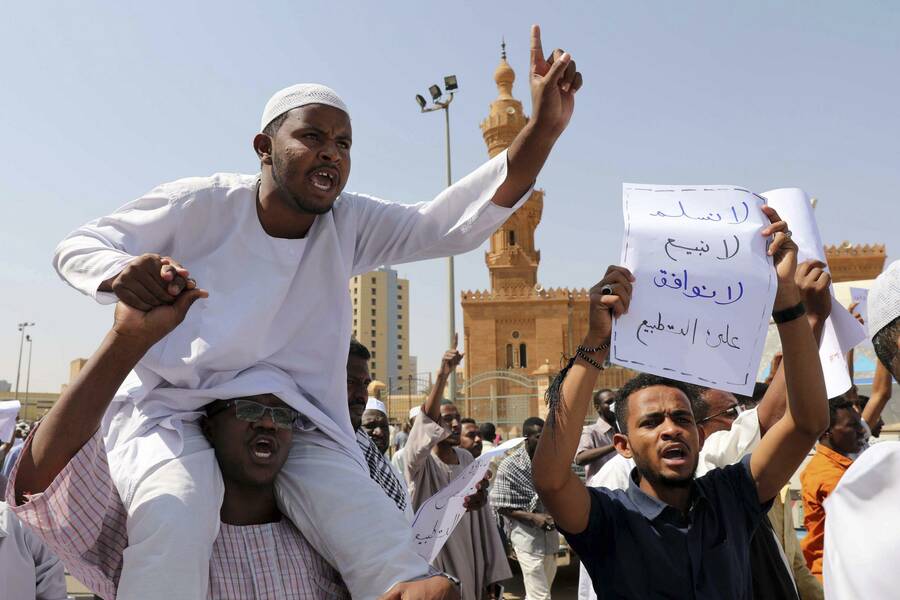 A man holds a poster in Arabic that reads, “we will not give up, we will not sell out, we will not agree on normalization,” at a protest in Khartoum, Sudan, over the Sudanese President of the Sovereignty Council Abdel Fattah Abdelrahman al-Burhan’s decision to meet Israel’s prime minister in a move toward normalizing relations, February 7th, 2020. Photo: Marwan Ali/AP Photo
Tweet Copy Link Email Print

We received a number of critical letters in response to Editor-at-Large Peter Beinart’s article “Israel’s Repressive Diplomacy” (October 26th, 2020). Because the letters all made similar arguments, we’re publishing one that we believe to be representative, along with a response by Beinart.

Peter Beinart has just woken up to the realization that with the exception of Israel, there are no democracies in the Middle East. Unlike Israel, none of the Arab countries offer democratically mandated freedoms to their people. It is unfair to blame Israel and the US for human rights violations in these countries: for example, blaming the arrest of dissenters in the UAE on Israel because Israeli nationals accepted a lucrative security gig in the UAE.

Security is one of Israel's largest exports. This is sadly made possible by the fact that Israel must employ its best people to deter terrorism, which threatens Israelis all over the globe. Israel's superbly trained men and women are in demand by corporations and countries who rely on Israeli expertise for protection. And it's not only personnel that is in demand. Israeli scientists just announced the development of security measures to protect medical equipment from hackers who could reprogram that equipment to harm patients. In a perfect world, such measures would not be required.

Beinart's standards for Israel are very high—in my opinion, unfairly so. Israel is surrounded by totalitarian regimes often run by fundamentalist clerics. To protect its people, Israel occasionally takes measures that are not harmonious with Marquis of Queensbury rules. Israeli peace agreements with Arab countries are a monumental achievement. They will change the face of the Middle East forever. Criticizing these measures is gratuitous nitpickery.

Larry Shapiro says it’s “unfair” of me to assign Israel and the United States any blame for human rights violations in Arab countries that are establishing diplomatic relations with the Jewish state. “To protect its people,” he writes, “Israel occasionally takes measures that are not harmonious with Marquis of Queensbury rules.” Sure, it’s unfortunate that Israel sold the United Arab Emirates spyware that it uses to hunt dissidents. But it’s a rough neighborhood. Benjamin Netanyahu had no choice.

But he did. Almost 20 years ago, the entire Arab League offered to make peace with Israel if it allowed the millions of Palestinians to whom Israel denies citizenship and other basic rights the opportunity to become citizens of a state of their own. The Arab League offer also called for a “just” and “agreed upon” resolution for Palestinian refugees. For more than a decade now, Netanyahu’s response to that offer has been to denounce the idea of a Palestinian state near the 1967 lines and to subsidize the mass settlement expansion that makes one impossible.

That has been his choice. By making it, he has forced Arab regimes that want peace with Israel to sell the Palestinians out, which some are happy to do. But because betraying the Palestinian cause provokes intense popular opposition in Arab countries, it requires intense government repression to carry out. Israel has helped provide Bahrain and the UAE the technology that makes such repression possible. By pushing a fragile Sudanese government to conclude a normalization deal its people appear to oppose, Israel and the US are making it more likely that Khartoum will resort to repression too.

Normalization deals that rely upon the oppression of Palestinians, Emiratis, Bahrainis, and perhaps the Sudanese are neither laudable nor, in the long run, sustainable. The alternative is recognizing that true peace requires a commitment to justice.

Conversation
What We Talk About When We Talk About “Intermarriage”
The Jewish Currents editorial staff takes on “Jewish continuity.”
Jewish Currents
Letters to the Editor
Letters to the Editor: Antisemitism Uptick and Organizing Jews
Readers respond to web content published in May, including an article analyzing antisemitism statistics and an audio conversation on organizing American Jews.
Jewish Currents
Sign up for our email newsletter, featuring exclusive original content