Palestinian poet and photographer Dareen Tatour faces the possibility of years in prison. 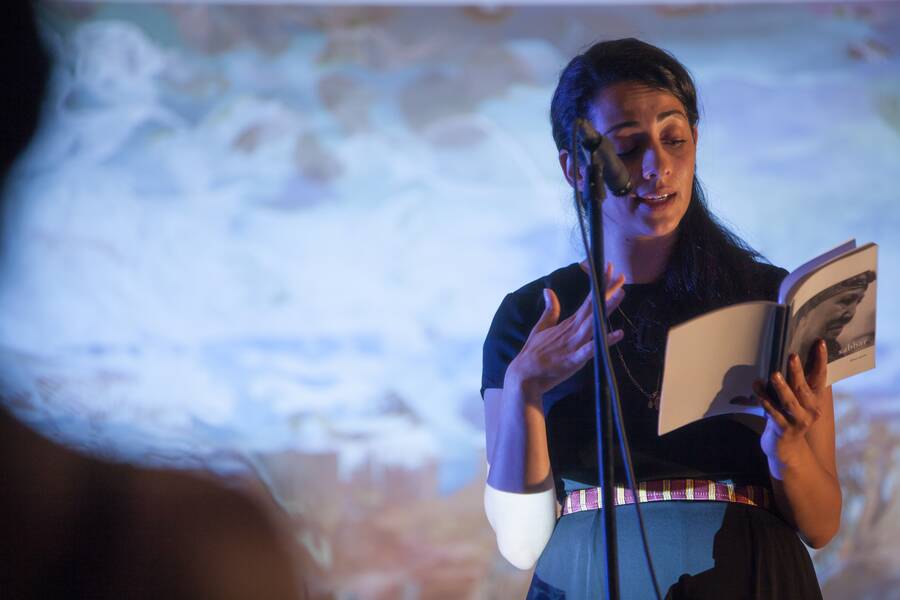 ON THURSDAY Palestinian poet and photographer Dareen Tatour was convicted by an Israeli court of incitement to violence and support for a terror organization, ending a years-long legal battle that began with Tatour posting a poem on Facebook entitled “Resist, my people, resist them.”

First arrested in October of 2015, Tatour was one of the earliest targets of Israel’s cybercrime unit, and its controversial predictive policing strategy of scanning social media posts for language perceived to be a threat against the state. In the years since, a rapidly increasing number of Palestinians–many of them teenagers–have been arrested over statements made online, often for little more than using the word “martyr” on Facebook.

In Tatour’s case, she spent much of the past three years on house arrest, as Israeli prosecutors argued that her calls to “resist the settlers’ robbery” and “not succumb to the ‘peaceful solution’” amounted to a violent threat against the state. That position has been condemned by free speech advocates like PEN International, and by over 300 writers, including Alice Walker, Claudia Rankine, and Naomi Klein, in an online petition circulated by Jewish Voice for Peace (JVP).

While prohibited from accessing the internet or using a cell phone, Tatour has maintained a line to the outside world through letters and her poetry. “Despite all this I have continued to write and I have touched the meaning of freedom,” she wrote, days before the verdict, in a letter addressed to JVP members. “Ideas have wings that no one can bind . . . My words have been able to cross distances and traverse borders until they reached to you.”

On Thursday night, hours after the verdict was announced, the heartfelt letter was shared during a poetry reading hosted by JVP in solidarity with Tatour. In a Harlem performance space maintained by the Qubit art initiative, in a converted parking garage, around 50 supporters gathered to hear Tatour’s words, and to share poems of their own.

The mood was somber, for the most part, weighed down by a sense of shared guilt about not being able to do more for Palestinians living in Israel, the West Bank, and Gaza. In “What It’s Like Being A Palestinian in UC Berkeley as Gaza is Burning,” the poet Dina Omar wrote about the frustration of observing the carnage from afar: “We spend hours rolling grape leaves to distract ourselves from internet updates / The death toll is rising.” She was followed by Lebanese-American writer Jess Rizkallah, who echoed that feeling of helplessness amid geopolitical chaos: “We made memes / We leaned into the nuclear apocalypse.”

But there were also moments of righteous anger. Referencing Brandi Seals, a black transgender woman killed in Houston last year, Golden, a trans-femme visual artist and poet, drew parallels between their own experience and the plight of Palestinians. “As a trans person, I feel like I embody a state of being erased, and I think of Palestinians as a cousin in that struggle,” said Golden. “They don’t even care to learn our names.”

Complementing the poetry readings were discussions about the nature of poetry, the ways in which the medium can confront the self-reinforcing power of language built on oppression. Claire Schwartz, a PhD candidate Yale and the author of the poetry collection bound, quoted the Iranian-American poet Solmaz Sharif, who wrote, “The maiming and obliteration of language preempts and attempts to excuse the maiming and obliteration of bodies.” Schwartz continued, in an email reflecting on the night to Jewish Currents, “Poetry refuses to take received language for granted and, as such, can challenge ideas about value (Who ‘counts?’ Who ‘matters?’ Who ‘deserves’?) so encoded in language they can sediment into common sense.”

Schwartz’s poem, Cross-Examination, cites the Polish poet Czeslaw Milosz’ question–“What is poetry which does not save Nations or people?”–asking, “Can a poem save a nation? / Can a poem survive a nation?” More specifically, Schwartz’s work seemed to ask, what does the imprisoning of poets say about a nation’s survival prospects? And what does it say about our collective apathy toward the Palestinian victims of state violence that Tatour’s case, and the hundreds of others like it, have not received more attention? “Alternatives to how things are can feel distant, unimaginable,” lamented Schwartz.

Yet, as the day’s searing heat wave gave way to an eerie downpour, the room became, as Schwartz put it, “a site for imagining more expansive futures,” with the understanding that, while poems read in a damp Manhattan garage likely won’t save Palestine, the act of solidarity was in itself valuable.

“Dareen shared her own perspective that building community abroad makes us feel more free,” said Shalva Wise, JVP Artist Council Coordinator. “We’re using the art form that she is being imprisoned for as a way to curate context, to hold a mirror up and say: Really think about it, everyone, this is what’s happening.”

Tatour is expected to be sentenced in the Nazareth Magistrate’s Court by the end of the month. She faces the possibility of eight years in prison.

This piece has updated to clarify Claire Schwartz's quotation of the poet Solmaz Sharif.

Jake Offenhartz is a freelance reporter based in New York.