Intersectionality Is Not a Reason for Jews to Leave Our Movements

The issue with intersectional discourse for many Jews, especially those with economic and skin color privilege, is that it requires us to take a tough look at how some Jews at home and abroad have become oppressors, or enablers of oppression. 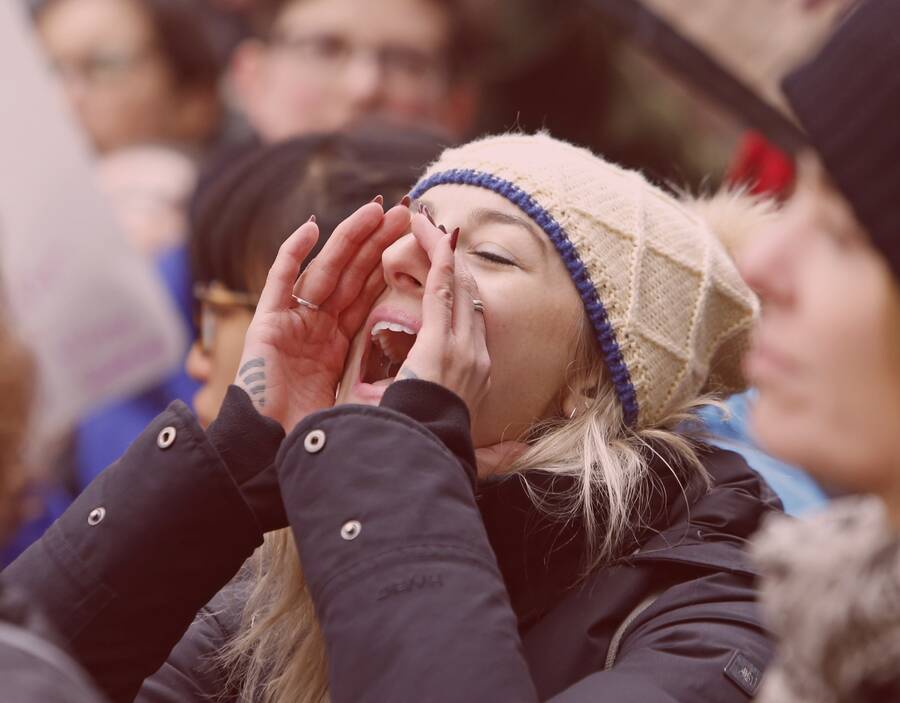 CERTAIN JEWISH PUNDITS have been pushing back against “intersectionality” for some time now, claiming that as it’s applied in activist contexts, the framework—which explains overlapping and differing systems of oppression—excludes Jews. “It's Time for Intersectionality to Include the Jews,” reads one headline. “By Rejecting Jews, Intersectionality Betrays Itself” reads another. More extreme critiques include Alan Dershowitz’s "'Intersectionality' is a code word for anti-Semitism" in the Washington Examiner and James Kirchick’s "How Intersectionality Makes You Stupid" at Tablet.

Most recently, Batya Ungar-Sargon at The Forward asks whether Jews, allegedly abandoned by intersectionality, should abandon it in turn. She argues that anti-Jewish prejudice, when it surfaces, involves ideas of power, control, money—ideas that project more privilege onto someone than they actually have. She concludes that we should reject the framework for a liberal focus on universal rights. “The 'punching up' of anti-Semitism makes it all but invisible to some on the left, masquerading as it does as a kind of speaking truth to power,” she writes. This is a fair point: in an activist era where so many are focused on dismantling privilege, the unique nature of antisemitism presents a wrinkle. But not an un-smoothable one. Especially since the issue of tension over Zionism in left spaces existed long, long before Twitter, before “identity politics,” and before “intersectionality” was a trendy word (I remember fraught meetings on the subject after 9/11 in my campus labor action group).

Antisemitism is one of a host of oppressions that an intersectional lens attempts to address, including other “punching up” prejudices like the idea that women are natural nurturers, for instance. Intersectionality, rather than a “focus” of activism, is a descriptive lens that helps us understand each other so we can effectively work together. It enables activists and public-facing individuals to be sure that we’re not drowning out other voices, hurting others while trying to help, or contributing to further alienation and mistrust. To put it differently, it’s a kind of empathy and solidarity that is informed by a rigorous look at society’s varying ways of keeping its boot on people’s necks.

Yet where there is a uniqueness to antisemitism, intersectionality has allowed us to analyze it, as Ungar-Sargon does at length—much of her piece is spent comparing the oppression Jews face to those faced by other groups (in this case, Black Americans), teasing out the ways that white Jews are both oppressed and oppressor, just before veering into a denunciation.

Her solution sounds appealing: “Rather than focusing on grievances particular to our bodies like race or gender, we ought to build coalitions around the rights we want guaranteed to all Americans,” she writes. The thing is, those coalitions already exist, aiming for social and economic equality, repealing of illiberal laws, and human rights. Calling for brand new ones amounts to telling Jews to walk away from the movements and coalitions already engaged in struggle.

The primary argument employed against intersectionality in this essay and others is that its result is Jews feeling unwelcome in left spaces because anti-Zionism can feel like, or veer into, antisemitism. Yet this presumes that other oppressed people do feel welcome in those spaces. Intersectionality acknowledges that no open space, even the most progressive or well-intentioned, is free from dominating social forces. So any person walking into a Women’s March or socialist meeting or a local Democratic canvass might experience discrimination or even hatred: a Jew, a woman, a queer or trans person, a person of color. For evidence of this, look no further than all the men who have recently been outed as abusers in spaces that explicitly trumpeted their feminism. The patriarchy is everywhere. White supremacy is everywhere. Antisemitism is everywhere, too.

Those who suggest that Jews therefore “abandon” intersectionality, as Ungar-Sargon does, and instead “center ourselves as Jews” to focus on “rights” recall the white women who are known to “flounce” (or leave) in feminist groups when they are called to account for being racist or insensitive, saying essentially, “I can’t stand the negativity, goodbye.” There’s no doubt these women experience sexism—but they often cannot accept the idea that you can experience one kind of oppression and perpetrate another at the same time. Kimberlé Crenshaw, the legal scholar who coined the term “intersectionality” to discuss the unique way black women face legal discrimination, discusses this phenomenon in an interview with the New Statesman. “At the end of the day, it really is a question of power: who has the power to end the debate? To walk away?” she says. “Sometimes it feels like those in power frame themselves as being tremendously disempowered by critique. A critique of one’s voice isn’t taking it away.”

Crenshaw’s point is that intersectionality doesn’t need to divide us as long as we can handle challenges and discomfort—for Jews, discomforts like learning that the Holocaust, scary and present in our lives, may seem foreign or long ago to our allies. Yet taking a deep breath to analyze these discomforts can unite us: as a favorite protest sign reads, “all our struggles are connected.” Connected, but not the same. Connected because systems of oppression often hold up one “model” group at the expense of another, hurting both, but differently. Intersectionality unpacks this, as Jews for Racial and Economic Justice’s (JFREJ) very intersectional “Understanding Antisemitism” pamphlet demonstrates. “White Jews are deployed against People of Color, especially poor ones, as a model minority. Both roles hide and enable the mechanics of capitalist exploitation and systemic racism,” the authors write. “Within the narrative imposed by racialized capitalism, white Jews represent a fantasy of power, while People of Color represent a fantasy of subjugation.” (It’s worth noting JFREJ has chosen to “offer” its own deeply intersectional analysis of antisemitism to its allies, rather than abandon their coalitions.)

A similar example of connected but opposing struggles involves women, work and motherhood. Back in 1971, decades before Lean In, a mere parenthetical in Toni Morrison’s “What the Black Woman Thinks of Women’s Lib” essay hits on a key irony of Betty Friedan-style feminism: “It is a source of amusement even now to black women to listen to feminists talk of liberation while somebody's nice black grandmother shoulders the daily responsibility of child rearing and floor mopping and the liberated one comes home to examine the housekeeping, correct it, and be entertained by the children,” she writes. “If Women's Lib needs those grandmothers to thrive, it has a serious flaw.” That intersectional analysis, supported by dozens of economic, racial, and feminists activists today, informs current pushes for systemic change like universal paid leave, sick days, subsidized childcare, and even universal basic income that coalitions hope will help the low-wage childcare worker first, and also benefit the overtaxed mother who relies on—and exploits—her.

My guess is that the issue with intersectional discourse for many Jews, especially those with economic and skin color privilege, is that it does require us to take a tough look at how Jews at home and abroad have become oppressors, or enablers of oppression. It’s painful and perhaps disorienting to see things that way, when so much Jewish self-definition is based on the historical atrocities we’ve experienced. It is so embedded in many of our personal myths to be the freed slaves or the former immigrants who have achieved freedom but not forgotten our roots (this is the meaning of the Passover story for many of us). Yet an intersectional analysis asks us to understand that in many ways, just by living comfortably in an unjust world, we have abandoned those roots.

Intersectionality can be most frustrating in discourse, especially online, when activists say things like, “I don’t want to hear from you if you’re not directly impacted by this issue.” This can be tough to swallow. It contravenes a treasured romantic idea of our own social justice tradition and the mandate of tikkun olam which suggests that we speak out and do something. An intersectional framework often asks us to listen first, to follow others’ lead. But Jews, whose tradition asks us hear the shofar before we make change, can embrace this approach. Rather than abandoning intersectionality, we should be leaning into discomforts and challenges as we continue to fight injustice.

Sarah M. Seltzer is a writer and editor based in New York City.

Critique
It’s Coming From Inside the House
Law enforcement ignores right-wing terrorism because officers share many of the same biases.
David Austin Walsh
Critique
Walking Off a Birthright Trip Isn’t “Stealing”
Walking off the famous free trip to Israel to protest the occupation makes sense—unless you revere Birthright’s political agenda or its monied backers.
Benjy Cannon

Investigation
Birthright Israel and #MeToo
Jewish Currents spoke with more than 50 Birthright Israel participants and staffers about their experiences with the often-fraught sexual and gender dynamics on the famous free trip to Israel. Here is what we found.
Sarah M. Seltzer
Sign up for our email newsletter, featuring exclusive original content