It’s Coming From Inside the House

Law enforcement ignores right-wing terrorism because officers share many of the same biases. 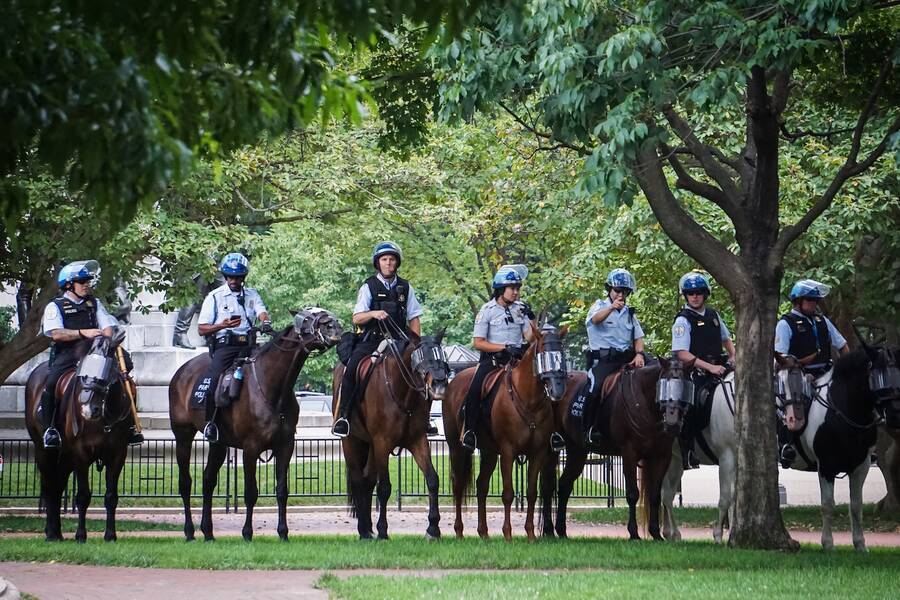 ON SUNDAY, the New York Times Magazine published a deep dive by Janet Reitman into law enforcement’s consistent failure to take seriously the threat of far-right and white nationalist extremism since 9/11. It’s a classic New York Times-ian take, featuring interviews with former FBI agents and ex-Obama administration officials talking about the political pressures they faced to downplay or ignore the threat of right-wing terrorism. (Let’s not forget the outrage from conservatives when the Department of Homeland Security issued a report on right-wing extremism in 2009.) But the article skirts the key issue—“law enforcement seems uninterested in policing the violent far right.”

It’s not as if this is obscured in the details of the reporting, Reitman cites an example of small-town cops in Wisconsin who excused as coincidence the white nationalist literature found in the home of a man who accidently blew himself up while building a bomb. She also notes that last year, DHS officials in Portland, Oregon deputized a far-right militiaman to help arrest a left-wing protester during a Proud Boys rally. One far-right activist interviewed by Reitman proudly contrasts the violent police response to NoDAPL protesters at Standing Rock to the cordial relationship between the alt-right and the police. A domestic terrorism expert tells Reitman that she is puzzled by police resistance to identifying right-wing terrorism as terrorism. “‘They’d say things like, ‘Why aren’t you calling Black Lives Matter or Antifa a hate group?’’” The obvious question—why do police seem to have such an affinity for the far-right—is left unexplored.

The answer is obvious: there’s a connection between the violence and brutality directed against communities of color by law enforcement and the affinity of so many cops for far-right politics. The Guardian published a blockbuster report nearly three years ago on the Chicago Police Department’s Homan Square facility, where cops “disappeared” more than 7,000 people, most of them black, who were denied access to lawyers and at least some of whom were subjected to torture. “Police used punches, knee strikes, elbow strikes, slaps, wrist twists, baton blows, and Tasers at Homan Square,” according to documents the Guardian obtained. Less systematic but equally prolific police violence still persists; ProPublica released a video last week showing two police officers in Elkhart, Indiana, brutally beating a handcuffed suspect during an interrogation. The suspect was Hispanic; the two officers were white.

But police violence is not merely rooted in a discriminatory political system, police violence itself is often politically motivated. A number of the detainees at Homan Square were local community organizers and civil rights activists, yet another example of police targeting activists of color. Fred Hampton, the chairman of the Illinois Black Panther Party, was killed execution-style in a raid on his apartment by Chicago police in November 1969. Mexican American journalist Ruben Salazar was killed less than a year later when he was struck in the head by a tear gas canister fired by Los Angeles police into a bar where he was quietly drinking a beer. (An inquest ruled the killing a homicide.) In 1985, Philadelphia police bombed the headquarters of the black anarchist group MOVE, killing 11 people. Indeed, violent police enforcement of existing racial hierarchies dates back well over a century in America. What law enforcement and far-right activists have in common is a commitment to the violent defense of these hierarchies.

This commitment of law enforcement officials to protect the status quo has effects on electoral politics. Police unions routinely close ranks behind officers accused of brutality; the incumbent county sheriff of Los Angeles is on the cusp of losing reelection, in part because of the deputies union’s opposition to his plan to release the names of 300 Los Angeles County deputies accused of serious misconduct. Resisting accountability for violence and brutality is central to police union politics.

The intersection of far-right politics and law enforcement attitudes and practices encompasses gender as well. The far-right is committed to violently upholding misogyny and patriarchy—the shooter who killed two women and wounded five others at a Tallahassee, Florida yoga studio last Friday posted a series of racist and misogynistic videos on YouTube—and this has parallels in law enforcement. Cory Newland, one of the Elkhurst officers who assaulted the handcuffed suspect, was previously suspended for failing to report a woman’s domestic violence complaint and then lying to his superiors about it. From the early 1980s through the late 1990s, the Philadelphia Police Department systematically dismissed the complaints of women who filed sexual assault reports as “unfounded,” putting nearly a third of all rape complaints in what a reporter described as a “bureaucratic dead zone.” Police officers who look the other way on domestic violence allegations and bury rape charges are practicing misogyny and defending patriarchy just as surely as the men committing abuses.

What can be done? A positive first step would be to avoid strained credulity when talking about the relationship between the far-right and the police. Reitman described in her article how Virginia state troopers “inexplicably” stood by and did nothing as a Ku Klux Klan member fired a gun at an African American counterprotestor at the Unite the Right rally in Charlottesville last year. It would be immensely helpful if the media and policymakers avoided framing police inaction in the face of right-wing violence as “inexplicable.” Doing so ignores a compelling and evidence-based explanation: police ignore far-right extremists because they agree with them.

David Austin Walsh is a PhD candidate in the history department at Princeton University. His writing has appeared in the Guardian, the Washington Post, the Washington Monthly, and Dissent.

Critique
Walking Off a Birthright Trip Isn’t “Stealing”
Walking off the famous free trip to Israel to protest the occupation makes sense—unless you revere Birthright’s political agenda or its monied backers.
Benjy Cannon
Critique
Intersectionality Is Not a Reason for Jews to Leave Our Movements
The issue with intersectional discourse for many Jews, especially those with economic and skin color privilege, is that it requires us to take a tough look at how some Jews at home and abroad have become oppressors, or enablers of oppression.
Sarah M. Seltzer