“I Campaigned on Right, Not on Fear”

If he loses due to his support for BDS, Florida congressional candidate Omari Hardy says his “conscience will be clear.” 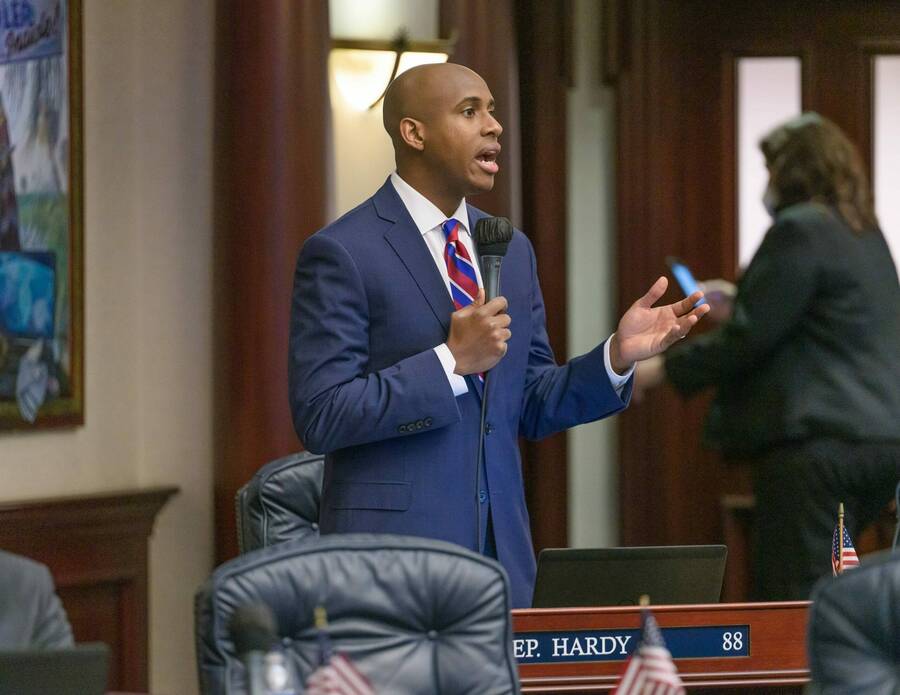 When Florida State Rep. Omari Hardy got a call from the right-leaning news outlet Jewish Insider earlier this month, he did something unusual for a politician running for Congress: He declared his support for Boycott, Divestment, and Sanctions (BDS), the movement to pressure Israel economically over its violations of Palestinian human rights. The statement was all the more surprising given the makeup of Florida’s 20th Congressional District, which Hardy is running to represent. While the South Florida district is majority-Black, 6% of its population is Jewish, enough to be decisive, especially in a race where the vote will be split among 11 candidates.

Hardy is hoping to replace longtime Democratic Rep. Alcee Hastings, a stalwart supporter of Israel who died of cancer in April. Hastings’s death triggered a special election process outside the normal congressional cycle: The Democratic primary will be held November 2nd, while the general election will take place in January, though the district’s overwhelming Democratic tilt makes the primary the main event. Hardy is a serious contender in the race, though it’s impossible to predict how well he’ll do in a field crowded with other state politicians. On October 1st, the Sun Sentinel, a local South Florida paper, endorsed Hardy, calling him “an unapologetic progressive who’s unafraid to challenge deeply entrenched powerful interests.” Hardy has also received the endorsement of the Progressive Change Campaign Committee, a prominent national electoral group.

But the backlash to Hardy’s comments could trouble his electoral prospects. In response to his pro-BDS declarations, the Florida Democratic Party Jewish Caucus said Hardy should be defeated. The Sun Sentinel seemingly walked back their endorsement, writing in an editorial that he “must face the consequences of being wrong.” The newspaper also printed an op-ed by Rabbi Alan Sherman, a former president of the Palm Beach County Board of Rabbis and an outspoken supporter of Donald Trump, in which he called Hardy the “Hitler of South Florida.” (That line was removed after publication, but a comparison to Hitler remains in the op-ed.)

Hardy’s decision to center Palestinian human rights in a congressional political campaign is abnormal. For instance, even Rep. Ilhan Omar, one of the most prominent congressional voices against Israel’s occupation, sounded more cautious notes during her 2018 campaign. Speaking at a synagogue in August 2018, Omar said BDS wasn’t “helpful” for the two-state solution, which Omar supports. But in November, after winning her general election, she said she supported the movement. For his part, Hardy told Jewish Currents he’s reconciled himself to the idea of losing over his support for BDS. I caught up with Hardy over the phone to discuss how he came to his views on Israel/Palestine, his foreign policy vision, and his reaction to the fierce attacks against him since the Jewish Insider article was published.

Alex Kane: What is your response to the backlash right now against your positions on Israel/Palestine?

Omari Hardy: Let me address the op-ed by the rabbi. The vitriol that he directed at me is evidence that he doesn’t have the truth on his side. People who have the truth on their side don’t need to resort to epithets and falsehoods to make their point. His op-ed served one purpose: to smear me as antisemitic, and to rally right-wing voters against me and my campaign. It was not the product of any sort of inquiry into my position. It was not a measured evaluation of my position. It was political rhetoric and nothing more.

AK: Could you explain to me how you came to the positions that you outlined in the Jewish Insider article, namely that Palestinian human rights are being violated by Israel, that you support the BDS movement, and that aid to Israel should be conditioned?

OH: When you declare for federal office, people want to pin you down on certain issues. The situation in Palestine is one such issue where people want to know, as soon as you declare for federal office, what you support and what you don’t support. I had to learn a lot very quickly because this is not just a normal congressional election. It’s a special election. And we have just five months to figure everything out. My focus has been a lot of the domestic issues, about how to help poor and working-class people in this country, people of color, folks who are underserved and underrepresented in our government. Although the Israeli–Palestinian conflict was on my radar, I had a lot to learn about the details of the conflict.

And so, early on, all I knew was that folks who I found to be credible, folks who were otherwise very progressive, felt that BDS was antisemitic. And not having done much inquiry into the substance of the matter myself, I took them at their word. Unfortunately, that became my position.

After I took that position in a forum—when I was asked, “Do I support BDS, yes or no?”—I had a conversation with Palestinian American attorney George Bisharat, who made very clear to me that my opposition to BDS was inconsistent with my progressive values as I applied them in every other case. And it dawned on me that by opposing BDS, I was being a hypocrite. How can I, as a Black man, ask white people to stand in solidarity with me and affirm that “Black Lives Matter,” while simultaneously refusing to stand in solidarity with Palestinians, as they use nonviolent protest methods to draw attention to the fact that their human rights are being violated and to encourage the government that’s violating their human rights to do better? How can I expect solidarity with me, while refusing solidarity with others, whose issues are the same as mine? That’s hypocrisy.

When I realized that, I changed my position, and I was relieved to have gotten a call from Jewish Insider to make my more informed position on this issue known and to clear my conscience. It was a blessing.

AK: Was there any particular thing George Bisharat said to you that convinced you to change your position?

OH: It was the totality of what he was saying. He asked me a lot of questions about the whole conflict. And then he sent me a document that had like 22 questions and answers about the conflict, which I read. And as I started reading it, I texted him and said, “Hey, I’m very thankful that you sent me this information.” I was not as informed as I should have been. And talking with George and other Palestinian Americans here in this country gave me an opportunity to learn the issues. I have always been disposed to speak with moral clarity once I know what the truth is. That’s my background, that’s been the history of me as a public servant. Sometimes it’s been ugly, sometimes it’s been just fine. But you have to speak the truth. You have to be clear about the difference between right and wrong.

AK: Do you think that the controversy you find yourself in is because you are a Black politician running on this kind of platform when it comes to Israel/Palestine?

OH: There’s always a unique quandary to being a Black person in America doing anything. So this is just a manifestation of challenges that come along with being Black in America.

AK: I imagine that you must have thought about whether this would hurt or help with voters. Where does that come into play when you’re thinking about articulating these kinds of positions in public?

OH: I knew that it would hurt me with some voters. But I also knew that I had to clear my conscience and correct the record. I refuse to politicize human rights. This isn’t about politics. It’s about right and wrong. I’m happy to have done the right thing morally, even if it was the wrong thing, politically. And if we lose on November 2nd by a handful of votes because of my position on BDS, I will rest easy.

AK: Do you think it could also help you?

OH: I doubt it. This is an election between a lot of local heavyweights. We all bring our constituencies to the table. The only voters with whom we did not have an especially long relationship were some of our Jewish voters because our districts are all so gerrymandered to exclude people who are not of color. For most of us in the race, our districts have very, very few Jewish voters. And that was the one constituency that was up for grabs.

We had a candidate forum in Kings Point [a retirement community in South Florida] several months ago, and it was in-person during what I call “the golden age” of COVID vaccinations, that four-week span when we thought we could just do whatever we wanted if we’re vaccinated. No candidate excited the audience there like I did. I understand now that because of my position on BDS, whatever gains I made there have probably more than evaporated.

But that’s life. You make choices. I am happy with the choice that I have made because I am now free. I don’t have to worry about what people will think about this position, because I’ve already taken it. I’ve already made it known and the sky hasn’t fallen. And win or lose I’ll be all right. My conscience will be clear. And I can proceed either as a member of Congress or as a private citizen, knowing that I campaigned on right, and not on fear.

AK: For most American politicians, Israel/Palestine is not their main issue. But there are ways to use the power of legislation as a member of Congress to impact the issue. Do you envision yourself taking this on legislatively if you are elected?

OH: Yes. And I think that it’s important we do this across the board. Whether it’s the way that the Brazilian government treats indigenous people, or the way Myanmar treats the Rohingya Muslims. I think we should radically rethink our foreign policy, and reevaluate our willingness to countenance these horrifying abuses across the globe in the name of American interests. We turn a blind eye to some of these human rights abuses because we find that it’s not in our interest to speak up and speak out about them. That has to change.

Report
What the Fossil Fuel Industry Learned from Anti-BDS Laws
Attacks on Israel’s critics have become the template for efforts to suppress climate activism, gun control advocacy, and other progressive movements.
Alex Kane
Newsletter
How the War in Ukraine Is Changing Israel’s Refugee Policies
Rules are changing in a hurry for non-Jewish Ukrainian refugees, but refugees from other regions haven’t yet benefited.
Alex Kane
Sign up for our email newsletter, featuring exclusive original content