How to Fight the Netanyahu Government (and Win)

To stop deportations of asylum seekers, we needed to build a coalition across racial and economic lines. 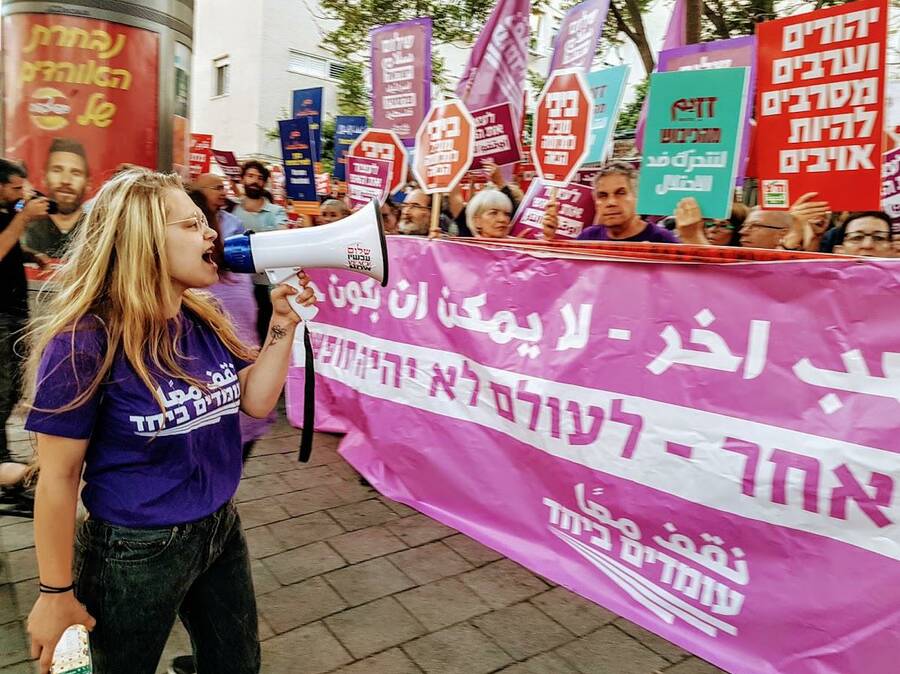 FOR PROGRESSIVES ABROAD, it might seem like all news coming from Israel is bad news. But recent developments in the struggle against the deportation of African asylum seekers prove just how much power there is in coalition building, demonstrating how our demands are more than a zero-sum game. When we simultaneously address the needs of diverse groups and communities, when we create campaigns that fight both racial and economic inequality, progressives in Israel can score victories—even under the current, highly challenging conditions.

The ongoing struggle against the deportation of African asylum seekers is a telling example. A few months ago, Israeli Prime Minister Benjamin Netanyahu’s government declared that it would deport asylum seekers currently living in Israel—more than 30,000 men, women, and children, most of whom were displaced either by the civil war in Sudan or are refugees from the brutal dictatorship in Eritrea. Under Netanyahu’s plan, they were to be sent to “other African countries,” where they would face an uncertain fate. In a surprisingly fierce response, multiple human rights organizations raised their voices as students organized on campuses to stop the deportations.

Netanyahu likely expected to defeat this opposition handily. Most asylum seekers live in the poor and marginalized neighborhoods of South Tel Aviv. The residents of these neighborhoods are mostly of Mizrahi (Sephardic/Middle Eastern) origin and have themselves suffered from decades of underfunding from the municipality and government. Infrastructure and housing have crumbled. Drug use, prostitution, and human trafficking are rampant. Not by chance, it was precisely in these neighborhoods that, once caught illegally crossing the Egyptian border into Israel, the asylum seekers were summarily dumped.

The right wing has found its ultimate scapegoat in these vulnerable asylum seekers. For years, the Israeli right wing has promoted a simple equation: the interests of the African asylum seekers are in direct contradiction to those of the disenfranchised Mizrahi residents of the South Tel Aviv slums. Indeed, in a much-publicized incident in 2012, Likud Knesset member Miri Regev exclaimed to a crowd at an extremist anti-refugee demonstration in South Tel Aviv: “the Sudanese are a cancer in our body.” Regev now serves as Minister of Culture in Netanyahu’s cabinet.

In their narrative, those who side with the asylum seekers—the human rights NGOs and the liberal elites in the media and academia—are actually undermining the rights of the poor residents of South Tel Aviv. Take your pick: Are you a snobbish, elitist, Ashkenazi “leftist” from the richer parts of North Tel Aviv, in favor of the African “infiltrators” over the interests of the Jewish poor? Or do you side with the plight of the South Tel Aviv slums, and support the deportation of Africans?

This right-wing dichotomy was effective at first because it contained a kernel of truth. There is, and has long been, a connection between liberal political positions and economic status and ethnic background in Israel. Using this history, the right branded all defenders of the refugees as elitists, as haters of the Jewish poor. Not so differently from the politics of Trump and his allies, the right-wing political establishment and its tycoon buddies thus paradoxically portrayed themselves as standing with the lower classes while doing little to nothing to alleviate their conditions.

But in January of 2018, the hold of this dichotomy began to crack from below. In the poor neighborhood of Neve Shaanan, local community activists—mostly Mizrahi feminist women from organizations such as “Achoti” and “Power to the Community”—formed an initiative called “South Tel Aviv Against Deportation,” headed by the veteran community activist Shula Keshet. Their message was simple but revolutionary: the right wing takes advantage of the plight of South Tel Aviv as an excuse to deport the refugees. As the government makes plans to deport the asylum seekers, these activists argued, they are already deporting the long-time residents of these neighborhoods; it is deportation through gentrification and the unchecked power of real estate agents who buy crumbling apartment buildings and tear them down to build luxury housing. These activists insisted that no African refugees would be deported in their name.

My friends and I at Standing Together, a new and growing grassroots movement of Jewish and Arab activists, quickly recognized the tremendous potential of “South Tel Aviv Against Deportation.” Our activists, some of whom are themselves based in South Tel Aviv, supported the initiative as it was making its first steps. Assessing strategically, we supported a coalition that would include both the underprivileged residents of South Tel Aviv and the African asylum seekers, as well as allies from all over the country. Throwing ourselves into the struggle, we convened large, simultaneous volunteer meetings in several cities. These veteran and newly-recruited activists were organized into a network of small teams with clear goals. Together, we launched a campaign entitled “Against the Deportation, In Support of South Tel Aviv.”

Standing Together was able to play an important role in this struggle for two main reasons. First, because we are not a traditional NGO: Standing Together is a grassroots movement that draws its strength from the energy and activism of its members. This is essential for any progressive campaign serious about winning. Secondly, we took a broad-sighted view of progressive politics, and insisted that economic and racial struggles cannot remain separated. For us, the plight of the poor, socially excluded Jewish residents of South Tel Aviv was on equal footing with that of the African asylum seekers. The electoral behavior of these poor Jewish communities sometimes positions them as the base of the right wing (analogous, perhaps, to the white working-class Americans who voted for Donald Trump). But this doesn’t need to be the case. When we show these groups respect, rather than treating them as ignorant reactionaries, coalitions and wins are possible.

Our activists helped hang banners in homes, windows, and balconies across the South Tel Aviv neighborhoods bearing the slogan “South Tel Aviv Against the Deportation.” Almost overnight, the public sphere of these neighborhoods changed. It takes only one man with a can of spray paint to write “Deport all Africans!” a hundred times. But walking in the street in South Tel Aviv, with balcony after balcony bearing these banners, anyone could see that behind every window and every home lived a person or family who supported the rights of both Israeli residents and asylum seekers.

Our activists also went to the richer, more desirable parts of the city in North Tel Aviv. There we knocked on doors, canvassed in the streets, and got numerous people to publicly express their willingness to have asylum seekers live in their part of town, calling for the Tel Aviv municipality to allocate greater municipal funds to the urgent problems of the southern neighborhoods. Throughout this campaign, we consistently emphasized the responsibility of the government. We laid bare the fact that they were not actually solving the problems of the residents of South Tel Aviv, in whose name they threatened to deport the asylum seekers.

Together we rewrote the dichotomy on which the right had so long depended. We made clear that the true elitists were those in the highest ranks of power, who scapegoated the refugees as a smokescreen for making private profit off of South Tel Aviv. At no time was this clearer than on February 24th, when 20,000 asylum seekers, South Tel Avivians, and activists from across the country demonstrated together. In previous years, pro-refugee demonstrations were organized by human rights NGOs and held in the manicured central squares of affluent Tel Aviv, the stage often dominated by line-ups of artists, celebrity intellectuals and liberal politicians. But this rally was different. Taking center stage were older Mizrahi women, long-time residents of these neighborhoods who spoke about their lives, the suffering their families and friends face due to government disregard for their living conditions, and about the realities of living alongside other poor people of African origin. Previous pro-refugee rallies were met with swift condemnation from Likud politicians. But this time, they were silent. They had no retort to the new equation: “South Tel Aviv and the refugees against the government.”

On April 2nd, Netanyahu convened a press conference wherein he announced that an agreement had been reached with the UN. Half of the refugees would be granted asylum in Europe and North America, and the other half would remain in Israel, with permission to work and live in various cities throughout the country. Furthermore, he announced that specific budgets would be allocated to South Tel Aviv. As we listened to the press conference, we couldn’t believe our ears. It was as if he was reading a statement penned by our campaign.

Our victory celebrations were cut short when pressure from the right caused Netanyahu to announce the very next day his cancellation of the new agreement with the UN. Nevertheless, the plan to forcefully deport tens of thousands of asylum seekers has not reappeared. So, in a sense, we are back to where we were months ago, before this sinister plan was announced—but better connected, organized, and prepared.

Clearly there is more fight ahead, but the lesson learned is one coming to organizations in Israel, America, and beyond. Rather than accepting the framework that the right forces upon us, we need to demonstrate the interconnection of real, material interests of various groups and communities—to thereby expose the government’s divide-and-conquer game. When Netanyahu tries to turn different underprivileged groups against one another, we will respond time and again by facilitating solidarity among them—not just in rhetoric, but in action.

Alon-Lee Green is the National Director of Standing Together, and has been a labor organizer and a peace activist in Israel for years.