How the US Media Misreads Naftali Bennett

Despite recent favorable coverage, the new Israeli prime minister is just as authoritarian and anti-Palestinian as his predecessor. 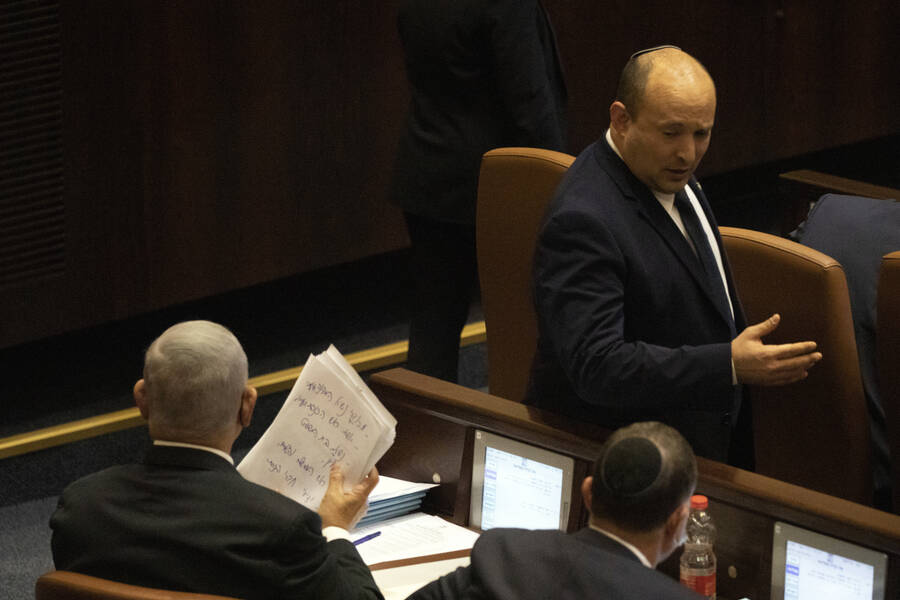 Benjamin Netanyahu obsessed over his image in US media—as political attaché in Israel’s embassy in Washington in the early 1980s, according to Ben Caspit and Ilan Kfir’s biography, he rented TV cameras to tape himself conducting practice interviews at home on weekends. But as prime minister, Netanyahu never received coverage as friendly as his successor, Naftali Bennett, has garnered in recent weeks in the mainstream US press. When Bennett visited Joe Biden at the White House in late August, The New York Times called his coalition government “a powerful example of the kind of democratic norms Mr. Biden has vowed to strengthen,” and The Washington Post congratulated him for “governing with a centrist bent.” Last month, Time included him on its list of the year’s most influential people, recruiting his coalition partner, Mansour Abbas, to write a glowing blurb that described him as a “courageous” leader who is offering “hope for a brighter future for us all.”

This admiration is particularly striking because until Bennett’s recent ascent, American observers tended to depict him as even more anti-Palestinian than Netanyahu. In a 2013 New Yorker profile, David Remnick noted that Bennett—a former leader of the Yesha Council, the umbrella organization for Jewish settlers in the West Bank—had accused Netanyahu of “betrayal” for endorsing a Palestinian state. Remnick compared Netanyahu to establishment Republican congressional leaders like John Boehner and Bennett to the “radical right-wingers” of the Tea Party. In 2014, the liberal Zionist group Third Narrative, which opposes the Boycott, Divestment, and Sanctions movement, nonetheless called for imposing sanctions on four extremists “who lead efforts to insure [sic] permanent Israeli occupation of the West Bank.” Netanyahu didn’t make the list, but Bennett did.

Underlying the favorable coverage Bennett currently receives is the belief that he has undergone an ideological metamorphosis so profound that this former hardliner now presides over a government far more committed to democratic principles and Palestinian dignity than its predecessor. But that’s completely false. This media narrative is based on a series of superficial and misleading dichotomies between Bennett and Netanyahu, which occlude the depressing truth that for the millions of Palestinians who live as stateless non-citizens under Israeli control, nothing important has changed.

The first dichotomy is that Netanyahu was a Trump-like autocrat while Bennett is a Biden-like restorer of democracy and the rule of law. On the surface, it’s a plausible comparison: Netanyahu, like Trump, subverted legal norms in an attempt to stay in power and out of jail. But fundamentally, Netanyahu was an authoritarian not because of his electoral shenanigans, but because of his government’s domination over millions of Palestinians who lack basic freedoms. And Bennett, a devoted opponent of Palestinian statehood, is as committed to that authoritarian subjugation as Netanyahu was. Bennett’s government, unlike Netanyahu’s prior coalitions, does include Ra’am—a small, renegade party elected by Israel’s Palestinian citizens—but Ra’am is excluded from Bennett’s influential “security cabinet,” and utterly powerless to make him grant democratic rights to Palestinians in the West Bank, East Jerusalem, and the Gaza Strip. While Biden is trying, with limited success, to defend the right of all Americans to vote, Bennett is ensuring that most Palestinians under Israeli control never get that right in the first place.

The US media also emphasizes the distinction between Netanyahu’s alliance with the GOP and Bennett’s eagerness to rebuild ties to the Democratic Party. After Bennett’s White House meeting, former Middle East negotiator Aaron David Miller told the Times that Israel’s new leader represents “a huge respite from what would have been Netanyahu’s highly partisan, politicized courting of Republicans.” The Post noted that Bennett and Biden are “united in a desire to turn the page after the frictions under ousted prime minister Benjamin Netanyahu.” But if Bennett is getting along better with the current Democratic president than Netanyahu got along with the previous one, it’s primarily because of a change in Washington, not Jerusalem. Unlike Obama—who appointed a high-profile envoy tasked with making Israel freeze settlement growth, and who declared his support for a Palestinian state near the 1967 lines—Biden is putting no public pressure on Bennett to leave the West Bank, or even to restrain Israel’s intensifying hold over it. Nor has Biden moved forcefully to revive Obama’s Iran nuclear deal, which Bennett adamantly opposes.

When Biden has urged Bennett to make policy changes, Bennett has reportedly refused. Upon returning to Israel after his trip to the White House, Bennett told West Bank settlers that Biden had asked him privately to temper his hardline policies on Iran, his opposition to the reopening of America’s consulate in East Jerusalem, and his support for settlement growth. But, the Israeli prime minister boasted, “I told Biden ‘no’ three times.” Despite Bennett’s rebuffing of the president, however, the US media frames Bennett as a centrist because Biden hasn’t made their differences public. It’s easy to appear conciliatory when the White House backs down in order to avoid a fight.

Finally, Bennett appears to represent a sharp break with Netanyahu because he’s cultivating better relations with Mahmoud Abbas’s Palestinian Authority, which operates in the West Bank. This warming relationship, the Times claimed late last month, “represents a major shift from the recent Netanyahu years, when the government frequently undermined the Palestinian Authority” by denouncing it publicly and starving it of revenue. The article quotes an analyst from the Israel Policy Forum, who called Bennett’s actions “a dramatic departure from the strategy of Netanyahu.”

If the Palestinian Authority were an independent and adversarial government—as it is often portrayed in the US press—Israel’s more friendly posture toward it would indeed represent “a major shift.” But the PA isn’t a government; it’s Israel’s subcontractor. It performs functions, from picking up garbage to repressing Palestinian protests, that Israel wants done but would rather not do directly. Given this reality, Bennett’s rapprochement with the PA merely constitutes a different tactic for maintaining Israel’s ultimate control over a subjugated people. Unlike Netanyahu’s government, Bennett’s has taken steps—like lending the PA money, allowing more Palestinian workers into Israel proper, and permitting the construction of more Palestinian homes—that could improve some Palestinians’ lives. But these improvements are designed to buttress a system, overseen by Israel with cooperation from the PA, which denies Palestinians freedom and represses them brutally if they agitate for it. The important transformation, in other words, has not occurred between Netanyahu and Bennett, but within the Palestinian Authority, which once conditioned its collaboration with Israel on the prospect of Palestinian statehood, but now collaborates merely to keep itself in office. This shift might not have occurred without pressure from the US, which has reportedly urged Abbas to draw closer to Bennett’s government even as Bennett accelerates settlement growth and insists that Israel will never relinquish the West Bank.

However much the mainstream US press frames Bennett as a welcome relief from Netanyahu, his policies aren’t particularly novel. What’s new is the yardstick by which they’re measured in Washington. Once upon a time, Israeli governments were judged by American policymakers and journalists on their willingness to support a two-state solution. Now they’re judged on their willingness to bury it politely. When it comes to Palestinian rights, the Israeli government isn’t growing more democratic or conciliatory. Americans just keep lowering the bar.

Analysis
Republicans’ Revealing Arguments Against the Islamophobia Envoy
The antisemitism envoy is exactly what congressional Republicans fear the Islamophobia envoy could become: a threat to free speech.
Peter Beinart
Analysis
“Pro-Israel” Pundits Don’t Talk About Israel
Many of the hawkish commentators frequently described as Israel experts show surprisingly little interest in the on-the-ground reality in the state they admire.
Peter Beinart

Analysis
Republicans’ Revealing Arguments Against the Islamophobia Envoy
The antisemitism envoy is exactly what congressional Republicans fear the Islamophobia envoy could become: a threat to free speech.
Peter Beinart
Analysis
“Pro-Israel” Pundits Don’t Talk About Israel
Many of the hawkish commentators frequently described as Israel experts show surprisingly little interest in the on-the-ground reality in the state they admire.
Peter Beinart
Sign up for our email newsletter, featuring exclusive original content