The Club Recreates the Ladino-Speaking World of Jewish Istanbul 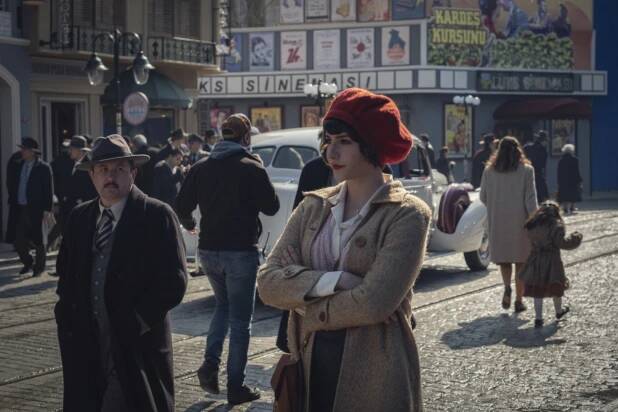 DESHARON TODOS LOS PERROS I GURSUZES, my friend Karen Gerşon Şarhon said. “They let all the dogs and good-for-nothings out.” But Karen—the editor of El Amaneser, the world’s last Ladino periodical, and one of the best teachers of the Sephardic Jewish language working today—wasn’t speaking as Karen. She was speaking as an innkeeper in the first episode of Netflix’s The Club, part two of which was released on January 6th.

As a Sephardi born and raised in Istanbul, it was jarring to see my friend and to hear the quiet beauty of Ladino—the sh sound (uncommon in Spanish), its mix of words from Hispanic and Turkish origins—on a streaming platform accessible to millions of people around the world. I was not the only person I know who spotted a friend; many minor characters in The Club, a Turkish production set in 1950s Istanbul, are played by community members rather than professional actors. Based on a true story of a Sephardic mother and daughter working in the city’s entertainment scene whose lives are thrown asunder by antisemitism, the show immediately differentiates itself from most productions in Turkey, which, if they acknowledge Jews at all, often depict us using caricatures of evil bankers. The creators’ efforts to involve the community signal a new approach to chronicling Istanbul’s multicultural past.

Even more meaningful than the thrill of glimpsing familiar faces onscreen is the intimacy of hearing a language that is not often amplified outside homes and community spaces. The use of Ladino declined precipitously after the mass extermination of its speakers by Nazis in France and the Balkans and the repression of religious minorities in Turkey, which spanned much of the 20th century. By the 1980s, it was no longer the lingua franca of Sephardic communities; in Istanbul, which contains the largest Jewish community in its region of origin, Ladino is rarely the primary language spoken inside the home. Among younger Sephardim, Ladino is mostly known for its many proverbs and colorful insults, while the abundant archives of Ladino literature wait to be rediscovered. Though people across the world have recently expressed increased interest in studying the language, others, even in Jewish studies departments, continue to dismiss it as unworthy of deep engagement, as the Sephardi scholar Devin Naar has observed.

For all these reasons, it feels refreshing and timely to see a major production in Turkey put genuine effort into getting this language right, including by hiring older community members as consultants and language teachers. These local speakers’ input is visible in moments when the characters effortlessly mix Turkish and Ladino. For example, characters refer to Israel as “Medina,” and to their Turkish neighbors as “vedres.” Both terms were adopted by Jews to avoid detection, and The Club nods to this history by choosing not to explain them to the uninitiated viewer. By preserving their secretive quality while nodding to Sephardim who will quickly recognize their meaning, the show prioritizes a full engagement with its Ladino-speaking audience, while registering Ladino’s presence for a global audience.

The quotidian use of Ladino in The Club is particularly poignant alongside visible traces of the “Citizen, speak Turkish!” campaign, whose effects stretched from the late 1920s into the 1960s. As part of Turkification—a set of policies designed to homogenize Turkey—“Citizen, speak Turkish!” mandated fines and even arrests for ethnic minorities “caught” speaking their first language in public. Such prohibitions would have fallen heavily on people like the characters in The Club, which follows the oft-forgotten workers of an upscale establishment, a glitzy jazz bar and salon called Club Istanbul. In the mid-20th century, most of those workers were Jews, Armenians, or Greeks. In one scene, the main character, Matilda, a Sephardic woman who has recently been released from prison, climbs the hills of the working-class Jewish neighborhood La Kula, and we overhear conversations in Ladino—kids calling their friends out to play, families inviting each other to dinner. Within a few decades, dispossession and pressures to assimilate pushed most of these families to emigrate, putting an end to this vibrant neighborhood life.

The show more explicitly takes up two of the most disastrous Turkification policies. In part one, the course of Matilda’s life changes when her family is subjected to the discriminatory Wealth Tax. The 1942 law was ostensibly designed to raise revenue during wartime, but its true purpose, made explicit by the prime minister in a closed-door party meeting, was to transfer property from Jews and Christians to “true” Turks. While taxes on Muslims were assessed at single-digit percentages, most religious minorities were forced to pay sums totalling more than 100% of their wealth. These predatory practices reconfigured the lives of many Jews and Christians, leaving them penniless. Radios, carpets, and fridges littered the streets of La Kula as families rushed to sell as much as they could. My own grandfather, whose father was a dressmaker in Istanbul, vividly remembers waking up to an auction in his living room. His wooden horse and colored pencils were among the possessions sold to cover the family’s massive debt. When this was not enough, his father was arrested and deported to a forced labor camp in eastern Turkey along with several hundred other religious minorities. Left destitute by the Wealth Tax and searching for a new beginning, half of Turkey’s 90,000 Jews left the country between 1947 and 1950, mostly settling in Palestine. Despite the devastation it caused Turkey’s small Jewish community, the Wealth Tax is largely absent from Turkey’s contemporary public memory. When it is remembered at all, the discriminatory policy is often defended as a wartime necessity. The show enters the private trauma of Jewish families into the public record, refusing to collude with sanitized accounts of the past.

Part two of The Club features a tragedy that is more commonly remembered, though still not taught in schools: the 1955 Istanbul pogrom. After a newspaper intentionally published a false story claiming that Atatürk’s home in Salonica had been bombed by Greeks, an organized mob descended on the Greek areas of Istanbul. The violence quickly spread to target Armenians and Jews, as well. Thousands of homes and businesses, numerous churches and cemeteries, and one synagogue were destroyed. Physical and sexual violence were rampant. In The Club, the events of the pogrom are carefully recreated, spliced with archival photos of the destruction. The show confines itself, however, to Club Istanbul’s immediate vicinity, eliding the true extent of the violence and leaving the most horrific scenes—the arson of churches, the desecration of the tombs of Greek patriarchs, a game of soccer played with looted skulls—outside the frame. As the pogrom ends, the characters set the table for a candlelit dinner while a voiceover describes them as a chosen family. This sudden change in tone belies the actual mass exodus that followed the pogrom: Almost half of the Greek population fled the country, and there were significant, though smaller, waves of emigration among the Armenian and already-diminished Jewish populations, as well.

Today, among the 10,000 Jews still living in Turkey, conversations about leaving remain ubiquitous. The legacies of Turkification policies linger, underwritten by a whitewashed retelling of history. In many quarters, we continue to be regarded as guests, welcomed at the mercy of our hosts, the Turks. Though legal citizens, we are not supposed to make demands of equal citizenship; we are only allowed to ask our gracious hosts for tolerance. Imperfect as it is,The Club punctures Turkey’s official narratives to present a more complicated—and realistic—picture of a Jewish world, and a Jewish language, that has endured enormous pressure yet continues to live on in new forms.

Nesi Altaras is an editor of Avlaremoz and holds an MA in political science. His writing in English, Turkish, and Ladino has been published in various outlets. He lives in Montreal.