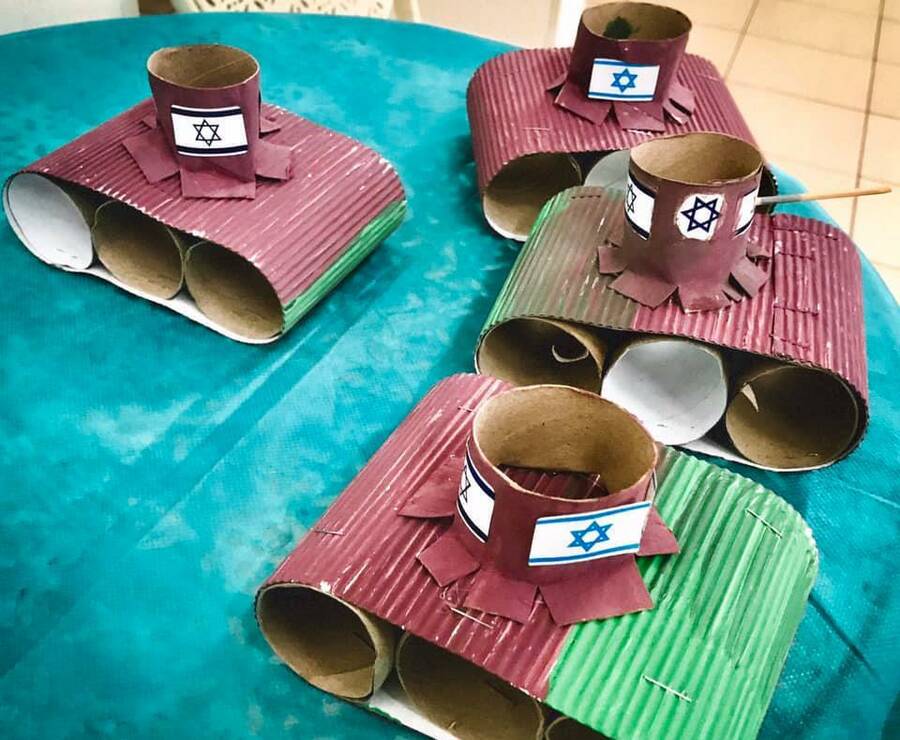 WHEN I WAS OFFERED a job teaching Sunday school, I didn’t expect my boss to spend the first faculty meeting of the year telling teachers of older grades to prepare “good propaganda” for teaching about the state of Israel. As the conversation moved on to another topic, I sat in stunned silence—no one seemed to notice that she said the quiet part out loud. In the less than one year I spent as a teacher, I witnessed many of these moments, as the school director and many of the teachers were focused on teaching the kids unquestioning devotion to the state of Israel at the expense of any semblance of basic Jewish education.

I earned $60 a week teaching a class of two- to four-year-olds for an hour on Sunday mornings, and supporting other classes as needed. The school is a joint venture between the local Reform and Conservative synagogues in Grand Rapids, Michigan. The children in my class were so young that parents were required to attend with them. The parents mostly lived in the affluent outer ring suburbs of Grand Rapids and worked in the booming healthcare and pharmaceutical industries. They would chat about the perils of finding good preschools or buying or selling real estate while their children played.

Representatives from the pro-Israel organizations StandWithUs and Israel At Your Doorstep visited throughout the year, with the former sponsoring a presentation from IDF soldiers who served in the West Bank and at the border with Gaza. StandWithUs is based in the US and receives funding from the Israeli government to assist in spreading government talking points about Israel, the occupation, and the blockade of Gaza. The group has been criticized for aggressively targeting critics of Israel on college campuses.

The director of the school started every Sunday by leading the children in singing the Israeli national anthem, Hatikvah. According to another teacher, we did this to help foster a strong Jewish identity connected to Israel. The way I saw it, we were teaching the children to love a country that does not love them back.

The Israeli government displays contempt for non-Orthodox Jews in the diaspora in a variety of ways. A member of the Knesset compared non-Orthodox Jews to dogs. Women of the Wall members get arrested for smuggling Torah scrolls into the women’s section of the Kotel. The Chief Rabbinate has a monopoly on whose conversions are accepted for the purpose of marriage and burial in Israel. The Interior Ministry refuses to recognize the Ugandan Jewish community. Even putting aside Israel’s abusive treatment of the Palestinians, which we ignored completely, it seemed cruel and misleading to foster such deep investment in a country that wouldn’t recognize many of their own Jewish identities.

On Sunday mornings, after my class was done, I would step into another classroom that needed extra support. I quickly realized that the students weren’t learning much of anything. The second graders didn’t know there were 613 mitzvot in the Torah. The kindergartners didn’t know we blow the shofar on Rosh Hashanah. The fourth graders didn’t know the Aleph-Bet. But all of these kids knew the words to Hatikvah.

If students weren’t getting a Jewish education, they also weren’t learning about the world at large. I found a coworker’s posts in a Facebook group for LGBT people, describing her frustrations with the school’s aversion to honest discussion of current events. She had criticized Bill Huizenga, the Republican member of Congress representing Michigan’s 2nd District, for defending a public high school’s nativity display, and a parent had sent an angry email in response, resulting in the school’s director telling her not to bring up politics with her 5th and 6th grade Hebrew class. She had previously gotten in trouble for discussing a British b’nai mitzvah ceremony for a non-binary child; the school forbade discussing trans issues in class.

It’s hard to see how banning discussion of difficult political topics that might make people uncomfortable is consistent with Jewish values. Not to mention the clear double standard at play, where a highly politicized pro-Israel curriculum is acceptable, but discussing other current events is forbidden. Both of the synagogues supporting the school had LGBT members, including families with children. Why was it official policy to alienate LGBT students?

In planning my own lessons, I tried my best to accommodate my toddlers’ five-minute attention spans. We had story time and watched Shalom Sesame and BimBam videos. I read Yiddish folktales and had the parents make hamsa charm necklaces with their kids. But I could never shake the feeling that I wasn’t doing anything that the parents weren’t perfectly capable of doing themselves at home. At a regional Jewish education conference, other teachers lamented that parental engagement was their biggest challenge. Another teacher once commented that families seemed to want “dry-cleaner Judaism,” where parents dropped their children off at school and expected to pick them up knowing everything Jewish. Was this all just a b’nai mitzvah factory? And if so, why did adults also lament that their children lost interest in participating in Jewish life after b’nai mitzvah and confirmation?

My breaking point came right after Yom HaShoah, Holocaust Remembrance Day. There was going to be schoolwide programming that Sunday. I created a lesson that would prompt the children to talk about things they liked to do when they felt sad, and would conclude with them decorating yahrzeit candles. In my email to parents, I stated that I would not be mentioning the Shoah, and that they could decide how much information to discuss with their children.

The assistant director immediately balked when I submitted the lesson. Discussing sadness or grief with this age group isn’t appropriate, I was told. Why don’t I do a lesson on Israel instead? The school has multiple ready-to-assemble craft projects and storybooks available.

I pushed back: toddlers are more familiar with feeling sad than they are with the concept of nation-states. Meanwhile, all our Jewish stories paired joyous occasions with sadness and tragedy. The school hosts an annual Purim carnival to celebrate a woman thwarting an attempted genocide. The Passover Haggadah reads “in every generation they rise up to wipe us out.” Did my bosses think my students didn’t notice this? Or that they didn’t notice the security guards patrolling the school, or that we kept our classroom doors locked at all times? Helping children process difficult topics in developmentally appropriate ways is important, I argued.

Nonetheless, after some more back-and-forth, the school director insisted that I change my lesson. I told her to find another teacher for the rest of the school year.

In the immediate aftermath, as I vented about this situation to friends, I learned that it wasn’t just my school failing children. A friend in Boston told me how their local Hebrew school taught so little Hebrew that children read from transliterated texts on their bar or bat mitzvahs. A teacher at the school had been fired from another job because she insisted on teaching kids what Hebrew texts actually meant rather than relying on rote memorization. A friend from Chicago had a classmate who grew up knowing Hatikvah backwards and forwards but didn’t know how to light Hanukkah candles.

In a Jewish educators Facebook group I was part of, a member earnestly posted asking for help creating an Israel curriculum that did not mention “Palestinian Arabs.” It is profoundly disturbing that teachers think it is acceptable to erase Palestinians from Israel education. By pretending that Palestinians and their demands for dignity, respect, and self-determination will simply disappear if we ignore them, we are creating a house of cards that will collapse as soon as children grow up and are exposed to even the most mild criticism of Israel.

Changing Jewish education will require establishing new priorities. We need to develop an Israel curriculum independent from the usual advocacy groups and Israeli-backed agencies. We need to ensure that educating children about Israel doesn’t come at the expense of basic education about Jewish values, rituals, and culture. What if schools exposed students to Yiddish, Ladino, and Judeo-Arabic alongside Hebrew lessons? What if schools acknowledged political realities and trusted teachers to lead students through complex topics instead of insisting that politics had no place in the classroom? What if we taught the why of mitzvot? What if, instead of demanding children sing Hatikvah every week, we taught them the history of the song, and discussed why some politicians in Israel refuse to sing it?

Any teacher or program director making such bold changes would face an immense amount of backlash from Jewish organizations and some parents, who have invested a lot of time, energy, and money in maintaining the right-wing status quo. But make no mistake: the consequence of choosing the status quo will be that children grow up feeling alienated from Jewish life altogether.