After criticizing “Israeli apartheid” and offering a processing space to Palestinian students in June, a campus office has been prevented from serving its regular functions, according to a civil rights complaint. 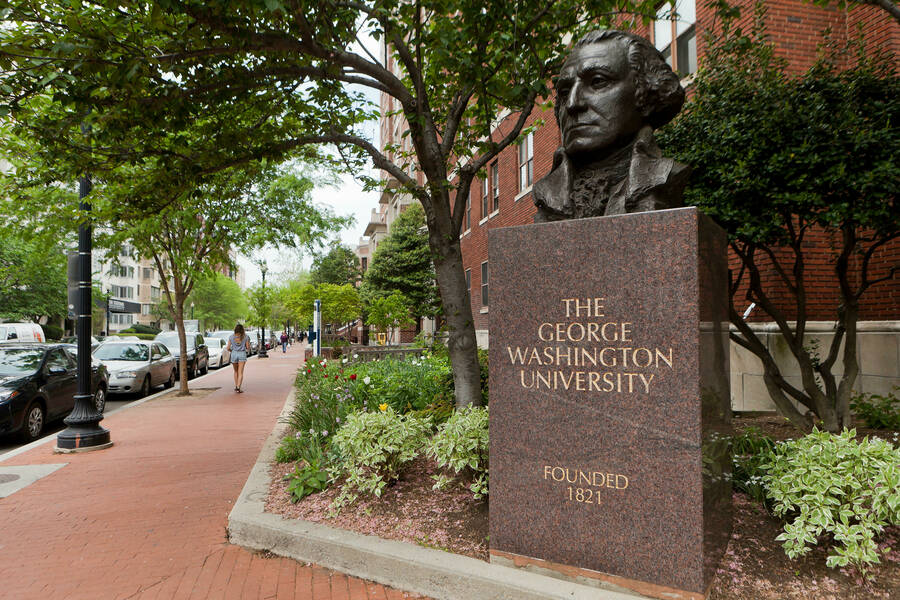 On June 2nd, not long after Israel concluded an 11-day aerial assault on the Gaza Strip, Olivia Blythe, who worked in George Washington University (GW)’s Office of Advocacy and Support (OAS), posted a statement on the office’s Instagram stating that OAS was “proud” to support “Palestinian human rights and liberation.” The purpose of OAS is to assist students dealing with traumatic experiences, and Blythe worked as a prevention specialist, providing services to survivors of violence. The post also said the office was “in solidarity” with Palestinians as they pursued global support for their “resistance against Israeli apartheid,” and advertised a “virtual processing space” the office was planning to host for Palestinians and others at the university impacted by Israel’s escalation of violence.

Nada Elbasha, a Palestinian American who works as an advocacy specialist in the office, was elated that OAS had adopted such a message. She was also surprised: While OAS had previously posted messages supporting Black, Asian, and Jewish students after incidents of racist or antisemitic violence, university offices in the US don’t typically post messages of support for Palestinians, and university administrations are often hostile to Palestinian activism. “It felt unreal, like, is this actually happening?” Elbasha said in an interview with Jewish Currents.

Later that day, however, administrators at the prestigious university in Washington, DC began demanding that OAS take down the post and cancel the processing space, according to a complaint that Elbasha has initiated against the university. The complaint alleges that GW Assistant Vice President of Health and Safety Kathleen Fox told OAS Assistant Director Tamara Washington that some individuals had complained about the post. Fox “implied an ultimatum to OAS,” according to the complaint, suggesting that if the office did not take it down, Washington would be fired. According to the complaint, Adena Kirstein, the executive director of GW Hillel, also told Washington that the post was harmful to Jewish students.

That evening, the office deleted the post. The next day, OAS posted an Instagram story informing students that the virtual processing event was postponed, and, in a separate post, apologized for the initial statement in support of Palestinian rights, explaining that the statement “did not create a safe space for all members of our community.” “Our supervisor was forced to post a statement that wasn’t written by our office, apologizing for speaking out against Israeli apartheid,” Blythe, the prevention specialist, told Jewish Currents.

In a statement sent to Jewish Currents, Crystal Nosal, GW’s Assistant Director of Media Relations, said that “GW is committed toward diversity, equity and inclusion and to maintaining a nondiscriminatory work and educational environment,” and pledged that the concerns raised by Elbasha “will be investigated.” GW Hillel did not respond to a request for comment.

The complaint Elbasha has now initiated against the university with the DC Office of Human Rights alleges that, since June, OAS has been placed under “intense scrutiny and micromanagement” and prohibited “from conducting its regular functions.” It argues that in disciplining the office, the university violated the DC Human Rights Act, which prohibits discrimination in educational institutions. With this claim, Palestine Legal, the advocacy group that is representing Elbasha, is advancing a new legal strategy to combat what it sees as crackdowns on Palestinian expression on campus. This past April, the organization filed a complaint alleging that Florida State University discriminated against a Palestinian student, the first time a Title VI complaint identified unequal treatment of Palestinians as a violation of civil rights law. Israel advocates have long used civil rights laws to claim that criticism of Israel, including speech that advocates for Palestinian rights, constitutes discrimination against Jewish students. Elbasha’s case and the Florida State Title VI complaint seek to turn that strategy on its head by asserting that, in fact, some campus skirmishes over Israel/Palestine are resulting in Palestinian students and workers experiencing discrimination on the basis of national origin.

The Palestine Legal complaint alleges that GW’s actions constitute discrimination on the basis of national origin because OAS has posted messages of support for other marginalized communities—for example, after the police killing of Breonna Taylor and the massacre of Asian women in Georgia—while Palestinians have been specifically denied resources. “By excluding one group from services and support—Palestinians—GW’s actions plainly violate the DCHRA and its own anti-discrimination policies,” Palestine Legal wrote in a letter sent to GW at the same time as the complaint. The letter demands that the university take a number of steps to “rectify” the harm done to Elbasha and her office, including apologizing for demanding the post’s removal, rescheduling the “virtual processing space” event, mandating a training on anti-Palestinian racism for GW administrators, and lifting the curbs on OAS activity.

“The complete denial of services to Palestinians egregiously violates civil rights law,” Radhika Sainath, an attorney for Palestine Legal, told Jewish Currents. “GW is basically saying Palestinians are so undeserving that they aren’t able to access services that GW provides.”

Since June, the work of OAS has been severely curtailed, according to Elbasha and Blythe. The letter from Palestine Legal reveals that university administrators have placed the office under an administrative “audit” to determine whether it will be permanently shut down. In the meantime, the letter notes, GW has barred the office’s employees from accompanying students to meetings with faculty or communicating with professors on students’ behalf—two of OAS’s regular functions, which employees say are key to the support they provide to students experiencing trauma and seeking accommodations. According to Palestine Legal, the university has also barred the office from rescheduling the “processing” event for Palestinians, and prevented it from posting on social media, instructing its staff that all external communications must be reviewed by GW officials first.

“We were basically silenced,” said Blythe, who left her job in October in part because of the actions of GW administrators. “I was a prevention specialist, and I wasn’t able to offer my programs.”

Advocates say GW’s moves are part of a pervasive culture of censorship targeting Palestinians and their allies on university campuses and in workplaces. According to Sainath, when Israel’s May military assault prompted dissent in the US, Palestine Legal witnessed a notable uptick in complaints about schools and employers attempting to shut down expressions of solidarity with Palestinians. Elbasha’s complaint was not the only incident at GW: After the club Students Against Sexual Assault posted on Instagram in support of Palestinian liberation in July, university administrators told the group “to remove the statement because such a statement was ‘harmful and exclusionary,’” according to the Palestine Legal letter. The group ultimately deleted the post.

According to Elbasha, the administration had weighed in on OAS’s efforts to engage Palestinian students even before the June Instagram post. In May, Elbasha sent emails to campus groups like Students for Justice in Palestine offering support to those impacted by the violence. When GW administrators learned of this outreach, they suggested to OAS that the office should also offer similar services to Jewish students. But Elbasha said she felt that reaching out to Jewish groups specifically would have conflated Judaism with Israel and Zionism by implying that all Jewish students had a close connection to Israel. Elbasha emphasized that the office offered services to everyone, including Jews, but defended the decision to do targeted outreach to Palestinian students in June as in keeping with a core mandate of her office: “to create spaces for populations that do not already have that space.” In May, OAS did post an Instagram story offering their services to everyone “witnessing the violence occurring in Israel and Palestine.”

For Elbasha, one of the most concerning outcomes of the crackdown on her office is that she can no longer offer robust services to all communities that face racism and discrimination.

“It’s not even about Palestinian students anymore,” said Elbasha. “It’s about all of the students that we support, and how they are not accessing the support that they deserve in the same ways that they were before.”

This article has been updated to add more information about the Instagram posts George Washington University's Office of Advocacy and Support published in June.