Gaza and the Question of Culpability

Hamas did not force Palestinians to march to the fence. Gaza’s desperate situation did. 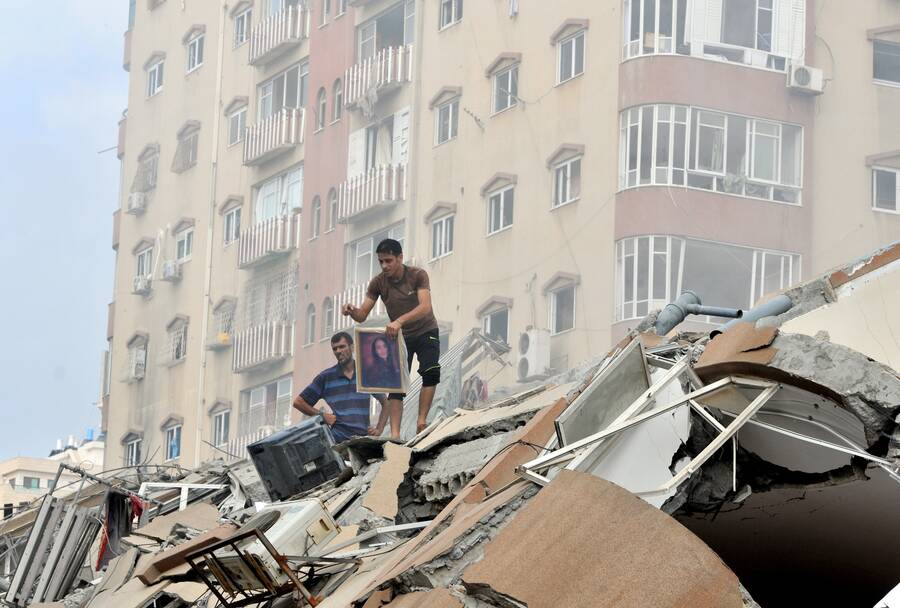 As American and Israeli leaders gathered in Jerusalem to celebrate the ribbon-cutting of the new American embassy in Israel’s self-declared capital, at least 60 Palestinians were killed and more than 2,700 wounded by Israeli forces during a mostly non-violent march of Gazans toward the Israeli-controlled fence separating Gaza from Southern Israel. The massacre occurred on the eve of the 70th anniversary of the Nakba, or the mass expulsion and flight of hundreds of thousands of Palestinians from their homes during the 1948 war that led to the creation of the State of Israel.

Israeli and American political and Jewish leaders—ranging from the Trump White House to the Union for Reform Judaism—have quickly moved to place substantial blame for Palestinian deaths on Hamas, the Islamist group which controls Gaza. They allege that Hamas, recognized as a terrorist group by both countries, is sending unarmed Palestinians to their deaths by Israeli sniper fire in order to divert attention from Hamas’ own (quite real) unpopularity.

This attempt to assign responsibility for the actions of the Israeli military to Hamas is a distraction on two counts. The first is that even though the march was supported by Hamas, it was organized primarily by independent activists who were largely non-violent and unarmed. Although Hamas officials have claimed that many of its members were killed during the demonstration, it is beside the point: Israel chose to shoot these unarmed protesters by the dozen anyway.

The second count is that even Israel’s own military leadership has long predicted that a day like Monday would arrive. “The economy in the Strip is on the verge of total collapse, like from zero to below zero,” a senior Israeli official told Haaretz this past January, warning of an imminent “uncontrollable blow-up.”

According to figures published by the Palestinian Central Bureau of Statistics last month, 53% of Palestinians in Gaza lived in poverty in 2017. Thirty-four percent of Gaza lived in “deep poverty,” which is traditionally defined as living on an income that’s half the actual poverty level; in Gaza, that level is set at about $687 a month.

The basis for this dire situation is the ongoing Israeli and Egyptian blockade of Gaza, which began after the Islamist group Hamas took control of the area in 2007. Under the terms of the blockade, Gazan commerce and the freedom of its people’s movement have been substantially reduced; there are frequent electricity blackouts, more than 90% of the water available is undrinkable, and Gazans are largely denied entry into Israel, let alone for routine or necessary medical attention. Imports of critical construction resources like cement are severely limited, stuffing Gaza’s 1.8 million residents into an increasingly limited and decaying housing stock.

Among Gaza’s youth, there is little hope for a better future. A United Nations report last year found that in 2016, Gaza’s unemployment rate was 56%, not accounting for “6 out of 10 young people who have dropped out of the labour market and are no longer seeking employment nor attending school.” Many of these disengaged, impoverished young Gazans were behind the Great Return March protests along Gaza’s border last month. “Desperation fuels this new generation. We are not going back to our subhuman existence,” wrote one of the protest organizers in a New York Times op-ed. Forty-four percent of Gazans are under 15 years of age.

FOR SOME TIME NOW, the Israeli military leadership has suggested that the dire situation in Gaza would naturally escalate from humanitarian crisis to full-blown war. In February, the Israeli Defense Forces’ Chief of Staff, Gadi Eisenkot, warned government ministers of a likely war with Hamas, as a result of the systematic deprivation in Gaza. During the last such Israeli assault on Gaza, in 2014, more than 2,100 Palestinians and just over 70 Israelis were killed, and an estimated 20,000 Gazan homes were destroyed.

If such a war breaks out, as Eisenkot predicted, the desperation of Hamas and Gaza’s residents will only be one factor in the death and destruction that comes next. Already, Israeli and American governments are pointing fingers for the Monday massacre at Iran, their primary regional antagonist, whose financial support for Hamas was restored last year as Iran and Israel began jockeying for influence in the Syrian Civil War. Speaking at the United Nations on Monday, American ambassador Nikki Haley claimed that “the common thread” of violence in the region is “the destabilizing conduct of the Iranian regime.”

Whether the violence escalates from here is uncertain; Israel and Hamas have both downplayed their appetites for a full-on war over the last year, and the latter reportedly offered earlier this month to negotiate a long-term ceasefire. But the Israeli massacre of Gazan protesters and the renewed Israeli-American diplomatic assault on Iran—and America’s exit from the Iran nuclear deal—may change that calculus. And yet in Gaza, the reality maintains the same tragic, decrepit shape, such that many Gazans feel they have little else to live for, besides protest in the face of live sniper fire.

“Most of our wounded patients say they have nothing to lose, no hope, no jobs, nothing. They tell our staff that they just want to go back and die at protest sites,” wrote Jason Cone, the head of Doctors Without Borders in the US, in a column about the situation in Gaza prior to Monday’s death. “Some are returning to the demonstrations with casts, on crutches, or with external fixators holding together shattered bones.”

Although Hamas may technically govern Gaza, and its rockets may take Israeli lives or damage Israeli homes, the group cannot be blamed for shattered bones and the death of hope in Gaza. Responsibility for that lies with Israel.

Newsletter
The Unbearable Ignorance of the ADL
The organization uses its moral authority to shield Israel from criticism while spreading misleading information about contemporary antisemitism.
Noah Kulwin
Conversation
American Anti-Communism Abroad
Vincent Bevins, author of The Jakarta Method, discusses the legacy of US intervention in Indonesia and Brazil.
Noah Kulwin
Sign up for our email newsletter, featuring exclusive original content
Short on time?
Sign up for our weekly Monday roundup of everything you missed in Jewish Currents last week.