Reflections from quarantine on the Jewish commandment to make a calendar. 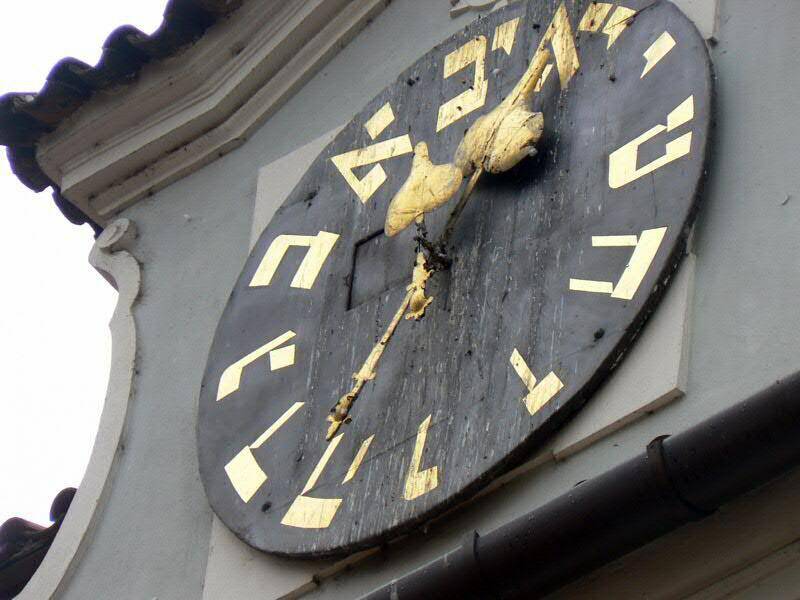 AS I MARK a month of self-isolation, I’ve been thinking incessantly about a scene from Michael Haneke’s excruciating 2012 film Amour. The film, shot almost entirely in the interior of a single apartment, follows an elderly couple, Anne and Georges, as Anne suffers the onset and progression of a degenerative illness, which gradually wrings her of the outward markers of humanity, leaving only the disease itself.

The scene on my mind takes place early in the film, after Anne has been diagnosed and rendered partially paralyzed, but before she has lost the ability to leave bed, to feed herself, to speak. Anne and Georges are reading quietly together in their study; her nose crinkles in a subtle, contractive expression, teetering on the edge of laughter or a sob. “Listen,” she tells Georges. “My horoscope.” As she reads her forecast (“Work: Your motivation’s back, but advance with caution. Fitness: Shake off the rust with a little exercise to get your mojo back”), Georges’s face betrays the same flash of devastation that just passed over Anne’s. A horoscope is a kind of Rorschach test, revealing the shape of our desires and worries in a catalogue of possible futures: you could meet someone, take a trip, have an argument with your boss. Its chief function, perhaps, is to provide a soothing reminder that there is a future at all. The scene from Amour, then, is about the dreadful claustrophobia of living life without one.

The pandemic has made this painful futurelessness a feature of all of our lives. I, like many, now live in an endless present of dishwashing set against the nonstop wail of sirens. This plague time is a different kind of time—what New Yorker cartoonist Emily Flake called “the non-time of airports and waiting rooms.” Attempts to look forward are met by dense fog. Do we pay taxes? Can we pay rent? Will students graduate—and into what? Will our parents live? When is the next haircut, the next wedding? We are knee-deep in death, yet there is no next funeral.

Into this non-time bursts the Passover holiday, an alien spacecraft descending amidst a hurricane. I’ll admit, I am not looking forward to Zoom seders, to cooking a festival meal for two, to miming the celebration of freedom from the heart of confinement. That the Jewish calendar can advance while everything else stands still seems rude, excessive; my overwhelming feeling is, not now. And yet the idea of non-participation feels infinitely more bleak, if only because it dooms me to this now, and this now only.

THE SAGES TELL US that futurelessness was a hallmark of slavery in Mitzrayim. One of the most significant ways the Egyptians imposed control over the Israelites was by regulating their time at every scale: They filled their hours with backbreaking work, their eternities with the lie that slavery could never end.

Into this misery came a commandment from God. As Rabbi Jonathan Sacks points out in a Passover teaching, it’s the very first the Israelites ever received: “This month is to be for you the first month” (Exodus 12:2). This directive, Sacks writes, is interpreted broadly as “the command to establish a calendar, with its Sabbaths and holy days and special seasons.” For Sacks, the calendar is thus understood as the principal tool of liberation; why else would God have instructed the enslaved Israelites to keep their own time as a prerequisite to their rescue? “If you are to be free,” Sacks writes, “the first thing you must learn to master is time.” (The Jacobins knew this; one of their first acts in power was to institute what is now known as the French Revolutionary calendar, to usher in a new era of liberty.)

In the ensuing millennia, the Jews have taken seriously this commandment to set a calendar. The day is broken into three periods for prayer. Weeks are marked by the return of the Sabbath. The first day of every Jewish month is itself a minor holiday. Then there are the major annual holidays, which sometimes last eight days at a time, and those days are broken up, too, each with its own distinct mandate. We also count the days between the holidays, between Rosh Hashanah and Yom Kippur, between Pesach and Shavuot. We divide our learning into daily and weekly portions, mapping the Torah onto our calendar so that each year marks a cycle through our holiest text.

Jewish time is made of such loops—daily, weekly, monthly, yearly, and beyond. But this repetition is not merely formal, nor merely commemorative. As it is said in the Mishnah regarding Passover observance, “In every generation, it is incumbent on each person to see themselves as if they had personally left Egypt.” And it is said in Deuteronomy that every Jew in every generation has borne witness to the giving of the Torah at Mount Sinai, which makes Shavuot similarly personal. These holidays, practiced in the present, do not simply mark past events; they enact their return. As Rabbi Eliyahu Dessler, a Lithuanian scholar, said in a 1942 lecture: “We should not think of time as passing over us, but rather of ourselves as moving through time. For example, there is really only one Shabbat, but we move through the weekly cycle and re-experience it week by week.” In other words, linear time is an illusion; our most ancient and fundamental Jewish stories are, in fact, the stories of our very lives.

If the stuffed Jewish calendar gives us the form of Jewish time—a response to the non-time of enslavement—the recurrent nature of our holidays provides the content. Every plot point on the calendar represents a story, and one we are told is happening now, to us, which also reflects on our ability to influence that story from our unique circumstances. If we must approach the Passover holiday and say, this is not just a story about Israelite slaves in Egypt, but also a story about a world in quarantine fighting a deadly virus, then our task lies in figuring out how to knit together the narrative strands. This creation of a story that holds together “now” and “then” is an exercise in the manufacture of meaning.

This exercise provides a crucial form of maintenance. As with Anne and her horoscope, there is always the danger of confinement in time, in which a failure to make meaning brings a kind of premature death. I don’t blame Anne for giving up. There is, after all, no inherent meaning in illness, in suffering. A virus is not a metaphor, or a message from God—it’s just a virus. What Jewish time provides, then, is an escape hatch to a broader timescale. I can’t help but see the desire for release in the sudden eruption of Shabbat candles on my social media feeds since the start of this quarantine period, as many members of my largely secular Jewish community turn to ritual. I suspect this is less an expression of faith than it is a defiance of the maddening homogeneity of these days of isolation. If we don’t know the exact shape of our future, we trust at least that it is made of a recurrence of Sabbaths, and in this, we assert some mastery over the terrible non-time. I would add that if we are the Israelites—if their enslavement is ours—then we already know, somewhere, that the calendar is a potent pathway to meaning-making, and that we must make meaning if we are to get free.

IN ALBERT CAMUS’S 1947 novel The Plague, an outbreak in an Algerian town shuts down all activity, rendering each resident an “exile in [their] own home.” The word exile appears again and again in the novel to describe the period of isolation. “The first thing that plague brought to our town was exile,” the narrator writes, “the sensation of void within which never left us, that irrational longing to hark back to the past or else speed up the march of time . . . we had nothing left us but the past, and even if some were tempted to live in the future, they had speedily to abandon the idea.”

In considering this metaphor—this “exile in time,” as Roger Lowenstein put it in The Washington Post—I am struck by the fact that the Passover ritual as we know it was conceived as an antidote to exile, a way to foster a sense of continuity in the wake of unspeakable trauma. After the destruction of the Second Temple in 70 CE, the elders of a reconstituted Sanhedrin were tasked with creating a ritual to replace Passover as it had been practiced until then—a blood sacrifice at the physical site of the temple—with what it would become, a series of texts and actions that could be reproduced by a people at a distance from one another, wherever in the world they happened to be. Here we are, called once again to perform this ritual, calling on it to help us traverse distances, not only between one another, but between now and before—to add new understandings of enslavement, of exile, of liberation, to our rhyming stories.

Perhaps these are merely convenient rhetorical coincidences, and nothing more. Perhaps the historical conditions that produced our ritual text will remain stubbornly subterranean tomorrow at our strained seders, and the potential to conjure the single, reemergent exodus will be lost to technical difficulties. Even so, there is value in inhabiting the story, sitting in it like Jonah in the belly of the whale. As Sabrina Orah Mark writes in The Paris Review, in response to a friend of a friend asking after her Passover plans: “Tell her we’re already inside it . . . Tell her we don’t need to celebrate it. It’s celebrating us.” The story is the fortress, guarding against the abysmal pull of meaninglessness, of days without distinction. From our exile in time, we return to this story, fitted to the conditions of exile—building a home in time within it.

This essay is indebted to the thinking of Daniel Kraft and Ben Ratskoff.

Responsa
Beyond Grievance
Though it may be a potent political tool, grievance can also maintain our investment in our own oppression.
Arielle Angel
Newsletter
Rehearsing Defeat
Rallies won’t save abortion rights. What will?
Arielle Angel
Sign up for our email newsletter, featuring exclusive original content
Short on time?
Sign up for our weekly Monday roundup of everything you missed in Jewish Currents last week.