Contextualizing the Crisis in Israel/Palestine

A selection of our articles from the past few years. 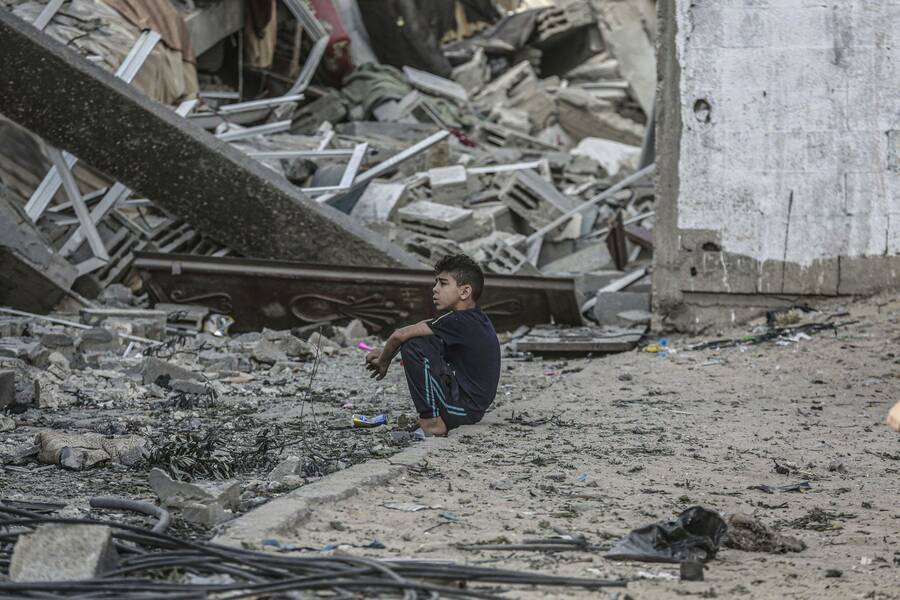 A child inspects the rubble of a collapsed apartment building after it was targeted by an Israeli airstrike in Gaza on May 17th, 2021. Photo: Mohammed Talatene/picture-alliance/dpa/AP Images
Tweet Copy Link Email Print

As the nightmare in Israel/Palestine continues to unfold, we’ve put together a selection of links from our archives that provide essential background for the current crisis. We hope you find this list helpful. It originally appeared in yesterday’s email newsletter, to which you can subscribe here.

On Palestinian thought, resistance, and leadership:

-A conversation from December 2020 among a group of young Palestinian intellectuals, analysts, and activists about what is next for the Palestinian cause.

-Mairav Zonszein’s September 2020 report on how Palestinians are adapting their strategies in the wake of the Trump administration’s Abraham Accords.

-From our Fall 2018 issue, Noah Kulwin’s profile of the Palestinian activist Bassem Tamimi, who has long led resistance efforts in the West Bank village of Nabi Saleh, and envisions a “Third Intifada” characterized by nonviolent resistance

On Zionism and the two-state solution:

-Peter Beinart’s blockbuster essay from last summer, “Yavne: A Jewish Case for Equality in Israel-Palestine,” as well as his follow-up essay last week on the Palestinian right of return.

-From our Spring 2021 issue, Jess Rohan’s report on the failure of the reconciliation paradigm, as demonstrated by the coexistence camp Seeds of Peace.

-Joshua Leifer’s July 2020 analysis of the resilient fiction of the two-state solution.

-Svetlana Kitto’s 2019 interview with dancer and choreographer Hadar Ahuvia on the appropriation of Palestinian dance that characterized early Zionist cultural formation, and the legacy of the Nakba.

On Palestinian dispossession and civic exclusion inside the Green Line:

-From last fall’s Housing Issue, Elisheva Goldberg’s report on a Palestinian town called Dahmash in Israel that officially doesn’t exist, and how its current state of limbo speaks to an ongoing policy of Israeli land theft. (As a coda to this piece, it’s worth mentioning that two of the first casualties of Hamas rockets within Israel—a father and his teenage daughter—were from Dahmash; they had been barred from building bomb shelters.)

-From our Fall 2019 issue, Ben Weinberg’s report examining the Israeli right’s ambitious program to revoke welfare rights for Palestinians as a means of redefining the body politic.

On American complicity in the settler movement:

-Mari Cohen’s October 2020 report on the Reform movement’s inability to influence the settler right from inside the Jewish National Fund.

-Alex Kane’s July 2020 report on how the GOP became the party of the settler right.

-From our Spring 2020 issue, Arianna Skibell’s report highlighting the work of evangelical dissenters on Israel.

On Israel advocacy and propaganda:

-Daniel Lark’s August 2020 report on how the IDF is using an app to gamify the spread of Israeli propaganda.

On the Biden administration’s stance on Israel/Palestine:

-David Klion’s July 2020 report on the battle over the Democratic Party’s platform language regarding the occupation.

-Joshua Leifer’s September 2020 argument that, with the naming of Kamala Harris as Biden’s running mate, the bipartisan consensus in support of Israel remains as durable as ever.

On the conditions in Gaza:

-From our Spring 2020 issue, Sam Holleran’s interview with scholar Jasbir K. Puar on the perils of exceptionalizing the Gaza blockade.

-Naomi Dann’s March 2019 interview with Jehad Abusalim, a student and activist originally from Gaza, reflecting on the Great March of Return.

-From our Summer 2018 supplement, the Unsettled podcast’s Emily C. Bell’s interview with Malak Mattar, a young Palestinian who began painting during Israel’s 2014 assault on Gaza.

-Noah Kulwin’s May 2018 reflection on Israel’s culpability for Palestinian suffering under Hamas rule.

-Elisheva Goldberg’s March 2020 report on Netanyahu’s reshaping of the Israeli media as a right-wing echo chamber in his own image.

-Joshua Leifer’s March 2020 argument (from one Israeli election ago) that the Arab-led Joint List is the only remaining parliamentary opposition to the Israeli right.

-Mari Cohen’s June 2019 interview with Amira Hass, who served as Haaretz’s correspondent in the occupied territories for 30 years.

-Maya Rosen’s March 2019 introduction to the resurgence of Kahanism, and how we’re still living with the consequences of the Hebron massacre.

Letter from the Editors
2021 at Jewish Currents
The Editors
Responsa
How Not to Fight Antisemitism
By appropriating the right’s strategy on antisemitism, the Jewish left has trapped itself in an empty discourse—and a counterproductive pose of victimhood.
The Editors
Sign up for our email newsletter, featuring exclusive original content
Want original reporting and analysis on Israel/Palestine?
Sign up for the Tuesday News Bulletin.