Any sustainable peace between Israel and its immediate neighbors will still require ending the occupation and resolving the Palestinian refugee issue. 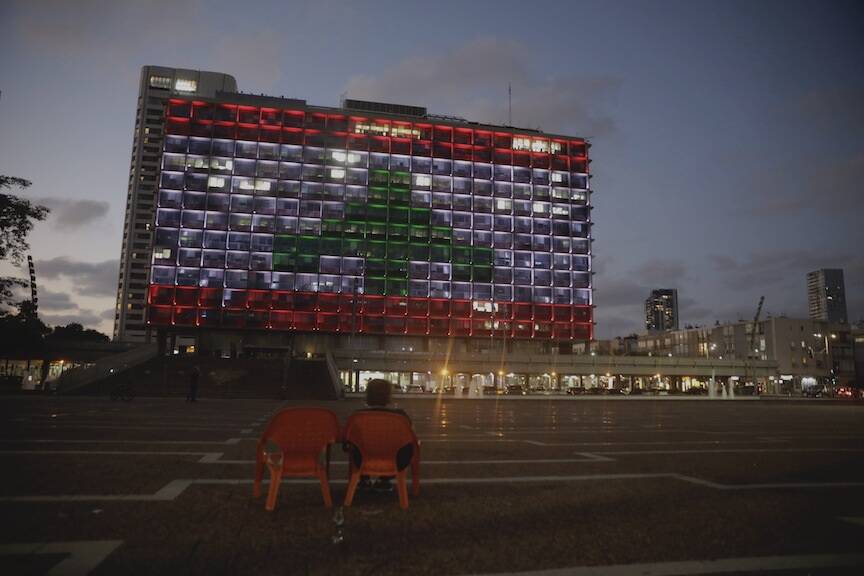 FOLLOWING THE DISASTROUS EXPLOSION in Beirut two weeks ago, Tel Aviv Mayor Ron Huldai announced that the city would project the Lebanese flag on the façade of the Tel Aviv municipality building in Rabin Square. The City of Tel Aviv has put on displays of solidarity like this before, projecting the French flag after the 2015 ISIS attacks in Paris, and the Egyptian flag following a 2017 terror attack that killed 29 Egyptian Copts. Huldai was not alone in making such gestures. Israel’s President, Reuven Rivlin offered his condolences, tweeting in Arabic, “We share the pain of the Lebanese people and sincerely reach out to offer our aid at this difficult time.” Alternate Prime Minister Benny Gantz offered the Lebanese government medical humanitarian aid, and an idea was floated to send Israeli doctors to Cyprus to treat the wounded.

To the international community, these gestures were meant to portray Israel as a country that upholds universal values, capable of showing compassion even toward its enemies. To the Lebanese people, it may very well have been meant as a genuine expression of fraternity and sympathy. Apart from a few right-wing ideologues—including former Likud MK Moshe Feiglin, who praised the bombing as “a spectacular pyrotechnics show,” and the prime minister’s son, Yair Netanyahu, who tweeted in response to the Tel Aviv municipality light display, “it’s simply insane, Lebanon is an enemy nation”—the Israeli public largely reacted to these gestures with casual, if tepid, support. As Mayor Huldai put it, “humanity precedes conflict.”

Particularly in light of Israel’s recent agreement with the United Arab Emirates, these gestures could be read as a glimmer of hope. Indeed, Israel is not fated to exist in a perpetual state of war, and is not rejected simply due to its Jewish character. Arab hostility to Israel is neither endemic nor an inherent characteristic of Arab societies. My own family’s history speaks to the possibility of a different Middle East. Throughout the 20th century, my paternal and maternal families lived as full members of Lebanon’s multi-communal society, their Jewish and Lebanese identities co-existing fluidly until the 1982 Israeli invasion. Under the right conditions, such coexistence could be possible again.

But while Huldai’s humanistic sentiment was laudable, it’s insufficient on its own. Symbolic gestures cannot repair the damage wrought on Lebanon by years of war, military intervention, and occupation—a decades-long, bloody conflict inseparable from the Palestinian Nakba, the ongoing occupation of the West Bank and siege of Gaza, and the unresolved Palestinian refugee crisis. If Israel wishes to normalize relations with its northern neighbor, it must first transform its relationship to the Palestinians, of whom 192,000 currently live in Lebanon as refugees. The status quo between the Israelis and Palestinians—the ongoing occupation of the West Bank and siege of Gaza; the fates of millions of Palestinian refugees held in indefinite suspension—is unsustainable, and will inevitably lead to more conflict. Agreements with the Gulf states notwithstanding, Israel will never become part of the fabric of the wider Middle East as long as this conflict persists.

Within hours of Huldai’s grand gesture of sympathy, Arab social media was alight with comments decrying the hypocrisy; many posted reminders that Israel killed more Lebanese people in the years between 1978 and 2006 than died in the recent explosion. In response to Huldai’s decision, Lebanese political commentator Sarah Abdullah tweeted, “We’d rather Israel end its illegal occupation of our villages, quit incessantly threatening to bomb #Beirut, and stop violating #Lebanon’s sovereignty every single day.” Other pundits posted photos of wrecked buildings from the 2006 Israeli–Lebanon war.

The long history of Israel’s wars in Lebanon, referenced by many commentators online, is inextricable from the Israeli–Palestinain conflict and, in particular, the Palestinian Nakba, in which 750,000 Palestinians fled or were expelled from their homes in 1948, 100,000 of whom ended up in Lebanon. The influx of Palestinian refugees destablized Lebanon, tilting the country’s already tenuous demographic balance, and heightening tensions among the competing ethnic and religious groups that would ultimately lead Lebanon into civil war. While offers of compensation and resettlement have been floated as part of Israeli–Palestinian negotiations, they were insufficient and ultimately failed, leaving Palestinian refugees of Lebanon in abject poverty and without any avenues to redress the injustice of forced exile.

In the 1970s, after Jordan expelled the Palestinian Liberation Organization (PLO), Palestinian militants made southern Lebanon their base, and Beirut became home to the PLO headquarters. Since 1978, Israel has invaded Lebanon three times—the first two times to crush the PLO in Lebanon, the third an ill-fated operation against the militant group Hezbollah, which formed in the wake of Israel’s 1982 invasion of Lebanon. And while not completely reducible to the absence of a just resolution to the Palestinian refugee issue, Israel’s conflict with Lebanon has been greatly fueled by it, ultimately leaving Palesitnian refugees to bear the brunt of the consequences.

The resulting wars have been bloody and devastating, leaving generations of Israelis, Lebanese, and Palestinians traumatized. The proximate cause of the 1978 clash was what is known as the “Coastal Road Massacre,” when the PLO, based at the time in Beirut, infiltrated Israel, took control of a civilian bus, and killed 35 Israelis, including 13 children; Israel invaded, pushing the PLO north across the Litani river in southern Lebanon, from which it had launched attacks against Israel. In 1982, Israel again invaded and laid siege to Beirut, expelling the PLO leadership to Tunisia yet failing at their grander plan to install a stable pro-Israel regime with which it could sign a peace-treaty. It was during this war that Israeli forces notoriously enabled the massacre by right-wing Lebanese Christian militiamen of at least 800 civilians, a majority of them Palestinian, in the Sabra and Shatila refugee camps. Israel occupied southern Lebanon until 2000, to support the Christian-dominated militia known as the South Lebanese Army and to defend Israel’s northern border.

More recently, in 2006—in what is known in Lebanon as the July War, and in Israel as the Second Lebanon War—a Hezbollah kidnapping of two Israeli soldiers precipitated an Israeli ground invasion of southern Lebanon. The 2006 war led to the displacement of over 1 million Lebanese people. Israeli aerial and artillery bombardment of Beirut, targeting Hezbollah militants as well as civilian infrastructure, resulted in over one thousand deaths. During the war, Hezbollah claimed Israeli casualties as well, firing thousands of rockets at Israeli cities. With far more Lebanese killed than Israelis, the 2006 war reflected the disparity in military force between Israel and Hezbollah at the time.

In each of Israel’s invasions of Lebanon, Lebanese civilians and the country’s infrastructure were, for Israel, tolerable collateral damage when it came to achieving its strategic aims and neutralizing threats, real and perceived, to Israel’s security. The same logic applies to Israel’s treatment of Palestinians today: To protect Israel from Palestinian terror, everything becomes permissible. For a brief moment, in our heavily mediatized public sphere, the disaster in Beirut appeared as a matter beyond politics, which enabled Huldai and other Israelis to enact a gesture of compassion. Yet the idea that compassion should not be political is reversed when it comes to the Palestinians: When an issue is politicized, compassion is not required. Israel’s major media outlets often report on Palestinians in dehumanizing language, justifying violence against unarmed protesters—like during Gaza’s Great March of Return protests in 2018–2019—labeling them “terrorists” who were “neutralized."

The recent Emirati–Israeli agreement has led many to believe that Middle East geopolitics are headed towards a new equilibrium. In a reflection of the shifting political terrain in the region, when asked about potential future negotiations with Israel, even Lebanese President Michel Aoun—founder of the Christian, right-wing Free Patriotic Movement, which is allied with Hezbollah—revealingly did not foreclose the possibility of peaceful relations with its historic enemy and southern neighbor. Instead he replied, “It depends. We have problems with Israel that we need to resolve first.” For Israel’s symbolic gestures at fraternity to be taken seriously, they must be accompanied by substantive political and social action toward ending the occupation of the West Bank and siege of Gaza and resolving the Palestinian refugee issue—that much, still, has not changed. These are prerequisites for constructing a new paradigm whereby Israel interacts with its immediate neighbors—and not only the more removed Gulf States, which have no history of war with Israel—as equals, through constructive frameworks, based on diplomacy and regional interethnic cooperation, rather than military force.

Given the history of war and occupation, it’s unsurprising that the Lebanese public holds very negative views toward Jews and Israelis. But hostility to Jews is neither inherent to Lebanese society nor insurmountable. Throughout the 20th century, close to 15,000 Jews considered Lebanon their home. The Jews of Lebanon were full members of a multicultural Lebanese society. Many remained in the country through Israel’s establishment in 1948, and only started to leave following the 1967 War. It was the Israeli invasion in 1982 that marked the end for the community; a deadly spate of reprisal kidnappings of prominent Jewish community members, including my great uncle, Raoul Mizrahi, forced those who had the means to flee to South America, Europe, and the United States.

But from the establishment of the French mandate of Greater Lebanon in 1920 until the outbreak of the civil war in 1975, many Jews in Lebanon shared with their compatriots a vision of a cosmopolitan and independent country. They were no less Lebanese than the other 22 ethnic and religious groups that called the country home, nor treated any differently than other citizens. The narrative that emphasizes conflict between Arabs and Jews shapes the collective Zionist conception of Jewish life in the Middle East, as well as Israel’s interactions with its neighbors. It reinforces a motif of hatred and suffering inflicted upon the Jews by Arab societies, pitting essentialist ethnic identities against one another. But it is far from the entire story. A time when joint Jewish-Arab identities existed and intercommunal relations flourished can be useful in imagining what is possible once a just settlement to the Palestinian issue is achieved.

We will never return to what was: My family will never again be part of Lebanese society. The way forward lies not in symbolic gestures but in advancing justice and equality for the Palestinians. A new political reality may create space for new forms of Arab–Jewish relations to emerge, transcending rigid categories, where neither the Jew nor the Arab will be branded as the “other.” To quote the Lebanese-born French author Amin Maalouf: “for it is often the way we look at other people that imprisons them within their own narrowest allegiances. And it is also the way we look at them that may set them free.”

Yaël Mizrahi-Arnaud is a research fellow at the Forum for Regional Thinking, focusing on the Middle East peace process, and Israeli relations with the Arab world. She is pursuing a PhD in History and Judaic Studies at NYU.